A complex severe weather scenario is expected to unfold across parts of the Southeast from late morning through the afternoon and overnight hours.

Multiple rounds of severe storms are possible, with damaging winds, large hail, and at least a few tornadoes likely.

One particular concern is for the development of an intense line of storms later this evening into the overnight across portions of Arkansas and Louisiana into Mississippi, where a Moderate risk (level 4 of 4) is in place to address a widespread damaging-wind threat 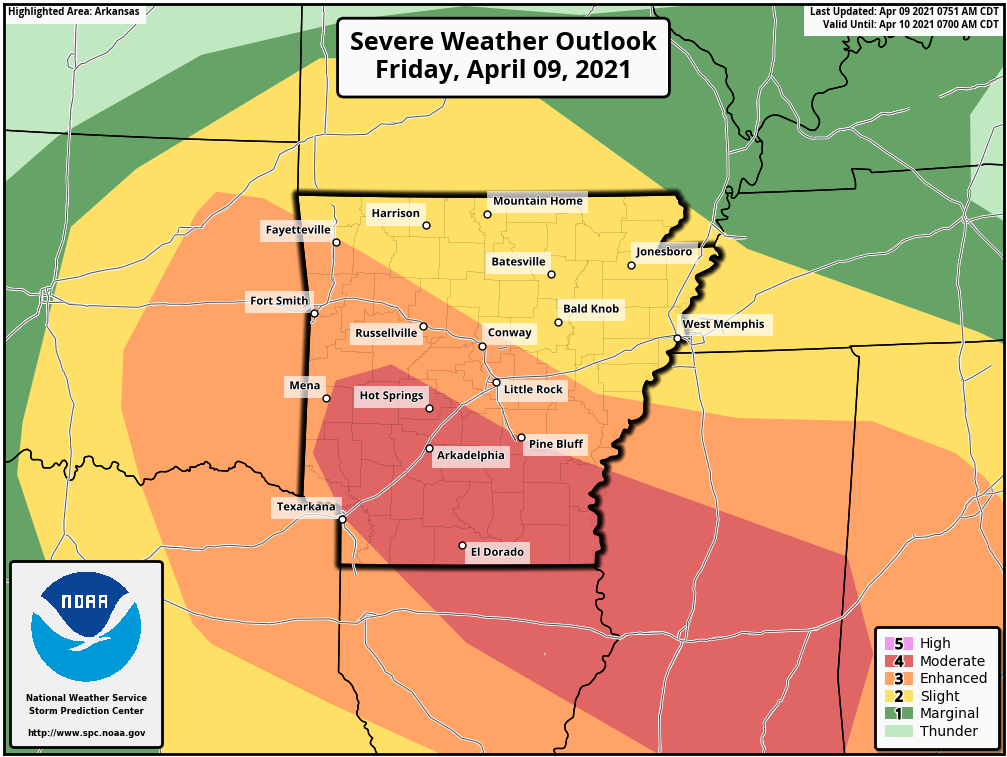 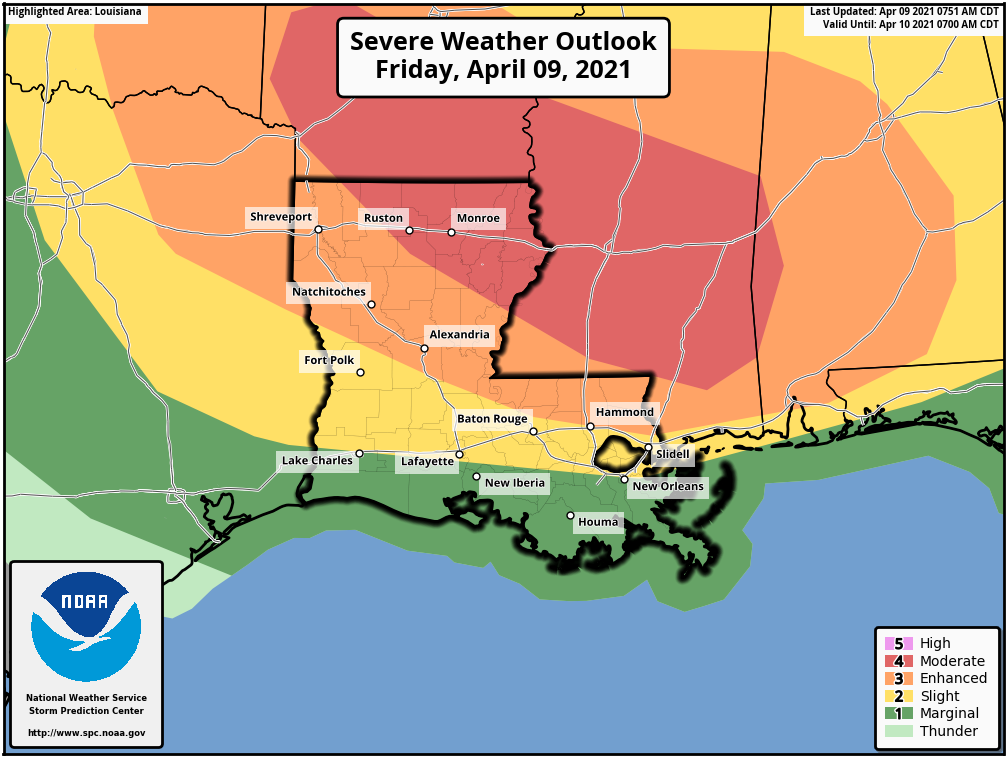 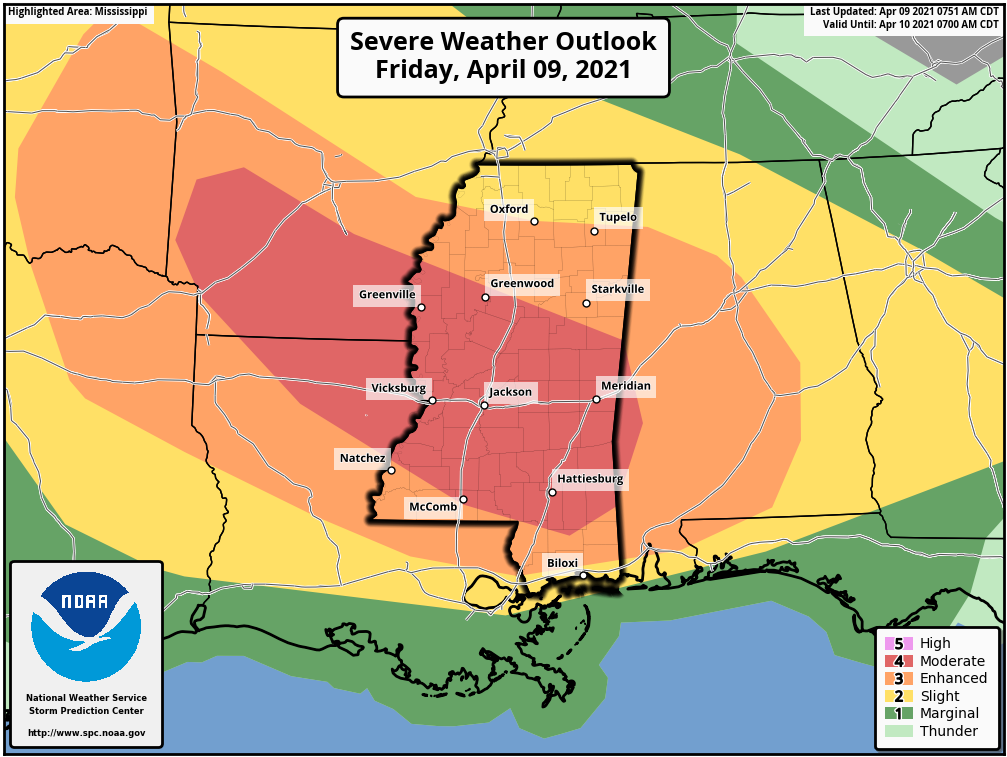 Here is the latest Wideview Outlook for Today!

Summary: Significant severe storms, including widespread damaging winds, and at least a few tornadoes are expected across portions of northeast Louisiana into Mississippi, especially overnight.

Large hail is also expected to be a concern, mainly during the day across parts of eastern Oklahoma into the Arklatex region. 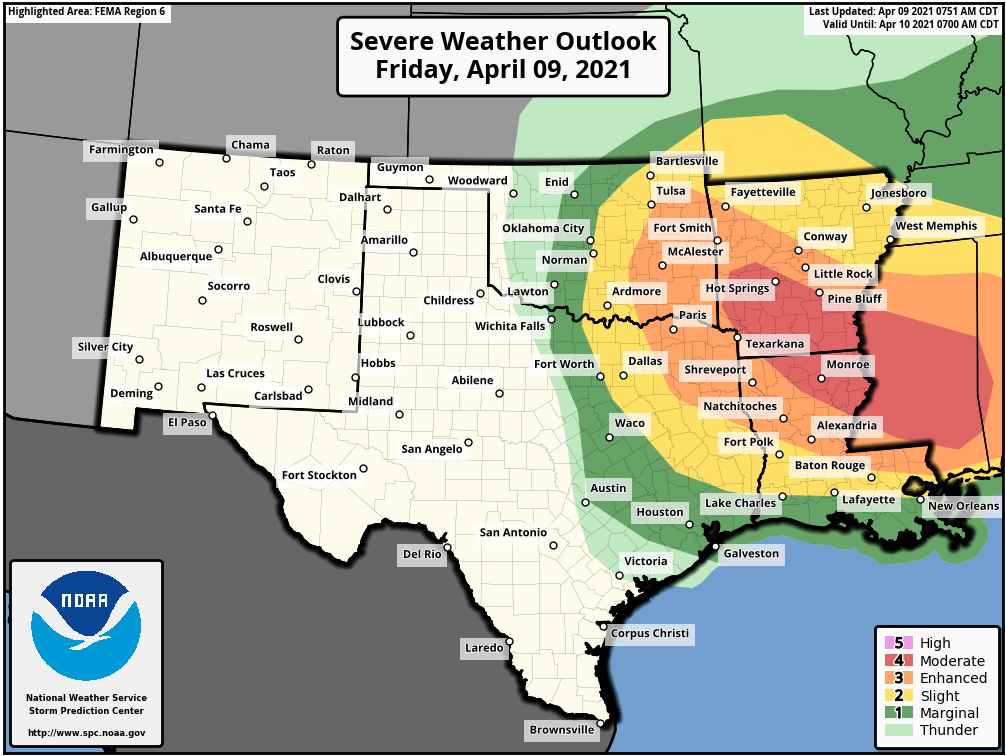 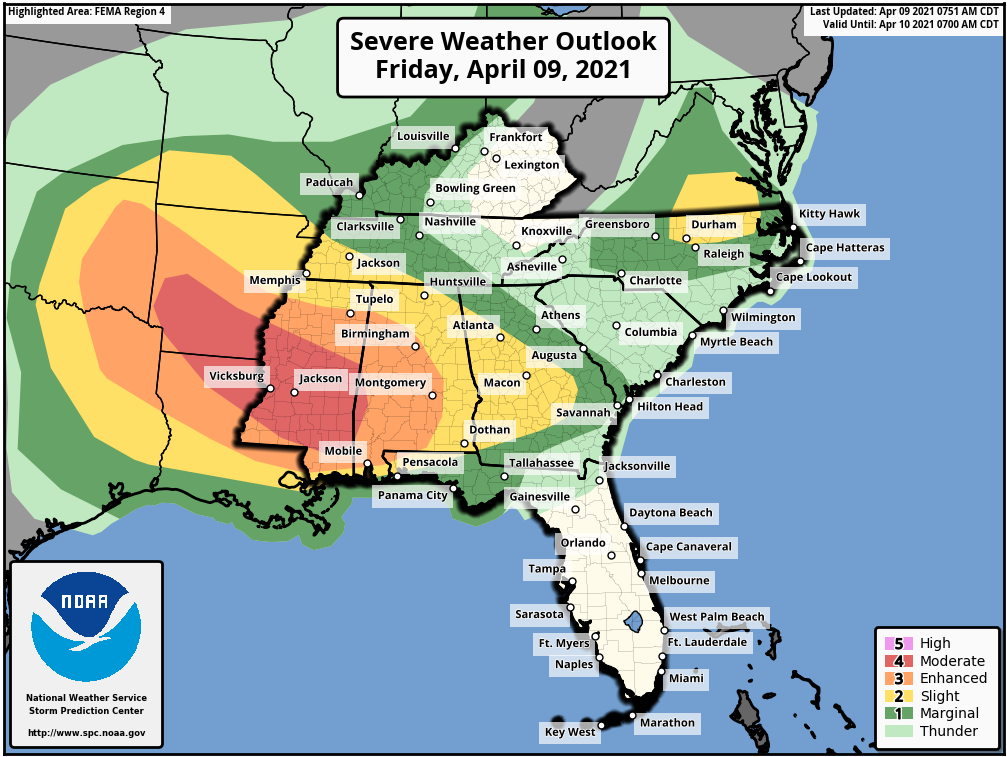 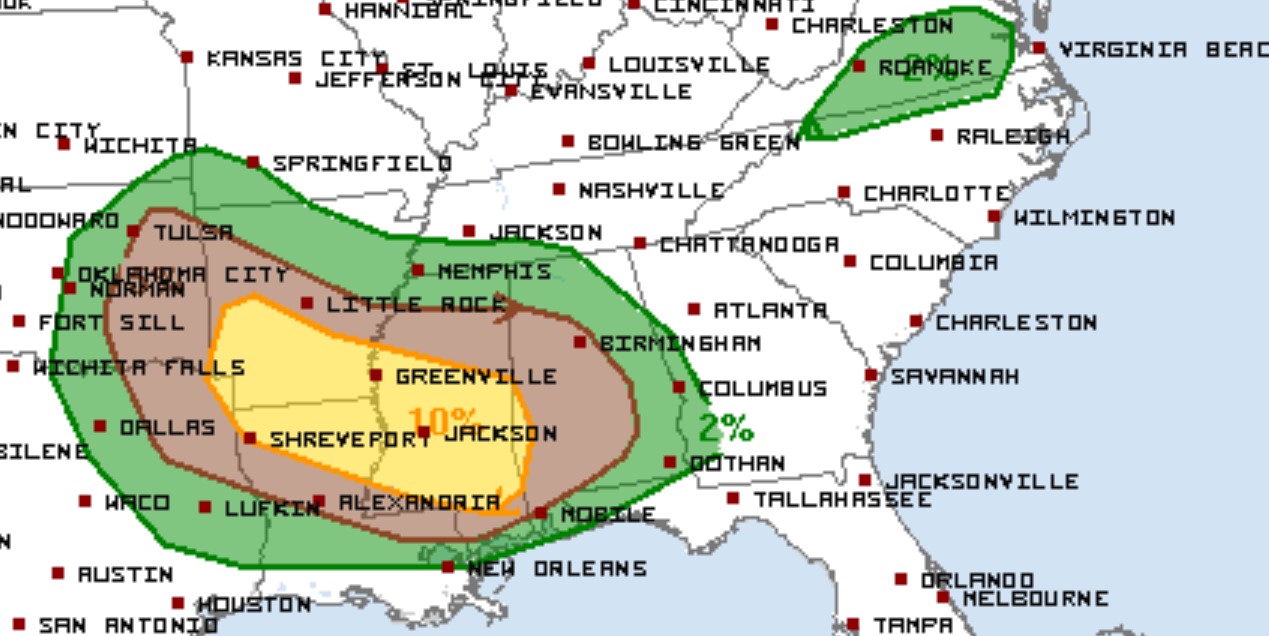 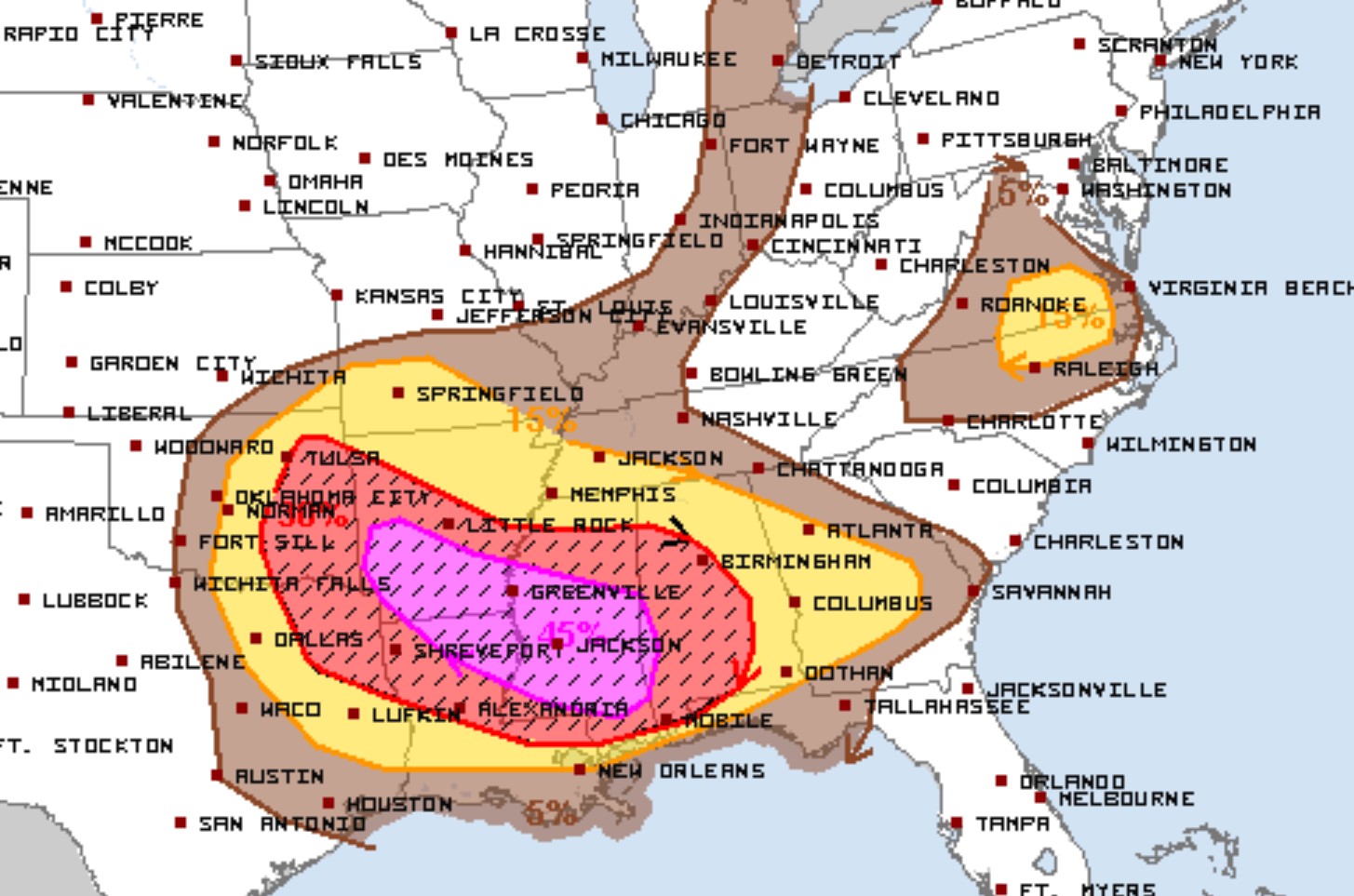 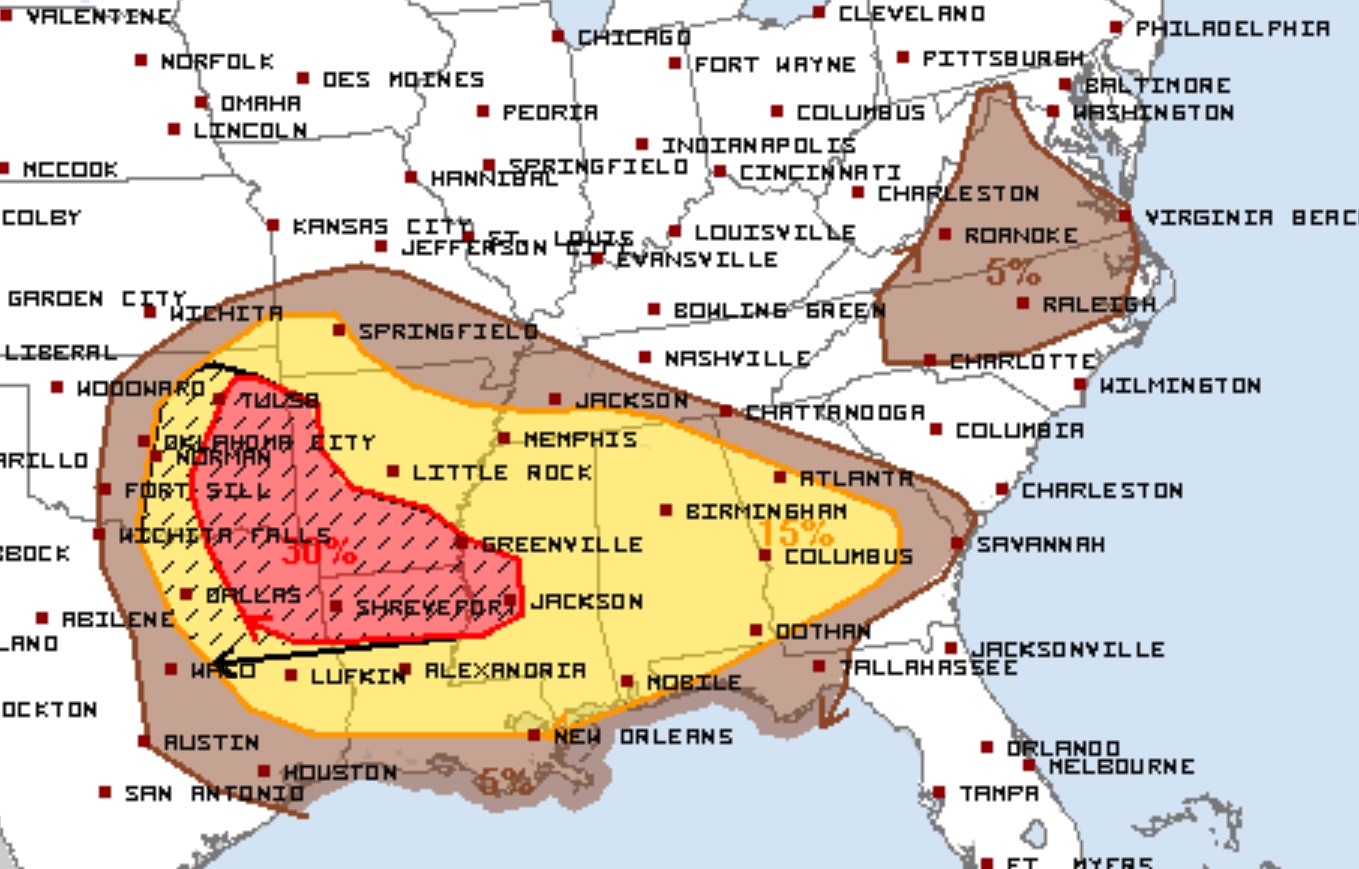 In mid/upper levels, a split-flow pattern will be maintained over the central CONUS, as one cyclone ejects out of a broader-scale trough causing the split, and another takes its place. The leading cyclone — initially centered near LSE — is forecast to weaken gradually to an open-wave trough and head northeastward over Upper MI and Lake Superior overnight.

This feature will dig southeastward across the central Plains today and this evening, before pivoting eastward tonight as a closed cyclone, across parts of the lower Missouri Valley. By 12Z, the associated 500-mb low should be located near the KS/MO line south of MKC.

At the surface, 11Z analysis showed an occluded, elongated area of low pressure across northwestern WI to northern IA. An occluded front was drawn from the northern part across Lake Superior and Lower MI, with weakening/quasistationary front across western OH, eastern portions of TN/KY, and northern AL.

A marine/warm front extended from a low over northwest TX across north-central TX, central LA, and southern portions of MS/AL. This boundary will move northward across southern /eastern OK, AR, and central MS/AL through the day.

The northern low should consolidate in form but continue to fill, and move northeastward over ON. Meanwhile, a second low is expected to develop along the front today near the dryline intersection, perhaps evolving out of the initial/prefrontal low over northwest TX.

The resulting low should deepen as the next mid/upper cyclone approaches, and move northeastward to near STL by 12Z tomorrow.

By that time, the cold front should extend from the low southward down the Mississippi Valley to near BTR, then southwestward across mid/upper TX coastal waters to deep south TX.

Episodes of severe thunderstorms are expected today into this evening between eastern OK, north TX and Mississippi, resulting in large (locally very large) hail, severe gusts and several tornadoes. This is a complex scenario with an assortment of mesoscale possibilities more diverse than the number of models and ensemble members available.

Progs somewhat inconsistently depict early initiation and evolution of the convection across this region, whether near the front in OK (a very plausible consensus theme), on the dryline (more isolated/conditional due to strong capping), and in the warm sector (highly variable). Multiple episodes of strong-severe thunderstorms may move over any given spot through tonight. This outlook represents both:

1. The potential for overlapping areas of severe at different times through the day and evening as different areas of convection evolve, but also:

2. A scenario that most progs reasonably do converge upon despite early differences: a dominant QLCS/MCS evolving out of convection initiating in OK and/or northeast TX, then moving east-southeastward to southeastward over the Arklatex to Delta regions, organizing a well-developed cold pool, and producing a swath of severe wind.

Whether or not this event will qualify as a derecho is a semantic exercise, and likely regulated by mesoscale convective/boundary processes yet to become apparent. Regardless, hurricane-force convective gusts are a threat with any such complex, in the Enhanced and Moderate areas. Also, because both the probable QLCS and any preceding supercell(s) will encounter an environment of moderate- strong buoyancy, steep midlevel lapse rates around the eastern rim of an EML, enlarged low-level hodographs, and favorable vertical shear, tornadoes also are expected.

Peak preconvective MLCAPE across the warm sector commonly should be in the 2000-3000 J/kg range, amidst 40-55-kt effective-shear magnitudes. As one or more MCSs plow cold pools into this environment, they should be maintained southeastward toward southern MS/AL tonight, continuing a wind-damage and sporadic tornado threat.

Widely scattered to scattered thunderstorms should develop from mid/late morning through this afternoon, with a threat for sporadic large hail and damaging gusts. A conditional, localized tornado threat also may develop.

Meanwhile, low-level shear will be maximized near the marine frontal zone, though weak absolute speeds will limit hodograph size somewhat. Modified 12Z RAOBs and forecast soundings from midday through afternoon indicate around 1500-2000 J/kg MLCAPE is possible, with 35-45 kt effective-shear magnitudes.

Effective SRH will range from around 200-250 J/kg on the front to around 100-1-50 J/kg coastward in the warm sector. With upper support meager in this area, but also modest MLCINH, convective coverage along and south of the front is uncertain.

Widely scattered to scattered thunderstorms should form this afternoon over higher terrain near the eastern WV Panhandle and VA Blue Ridge, with additional convection developing later in the afternoon and evening southward across portions of western NC. This activity is expected to move eastward across much of NC and VA, offering isolated large hail and the potential for damaging to marginally severe gusts.

A tornado cannot be ruled out, especially with any convection that can interact with the front, where weak but also backed surface winds will enhanced low-level hodograph size and boundary-layer bulk shear. Modest low/middle-level winds will limit deep shear, with effective-shear magnitudes generally 20-35 kt in most areas, perhaps around 40 kt along the front. As such, mostly multicell modes are expected, with isolated, transient supercell character possible near the front.

Convection in the northern parts of the outlook area will be tied more strictly to orographic processes, and will have a much narrower zone of favorable instability to access, north of the warm front.

That convection should weaken within a short distance eastward of their initial flare-up.

However, activity across central/southern VA into central NC should persist well into the evening, perhaps as far eastward as the Tidewater areas from Hampton roads toward the northern sounds of NC, before weakening in the ongoing nocturnal/ boundary-layer stabilization process.