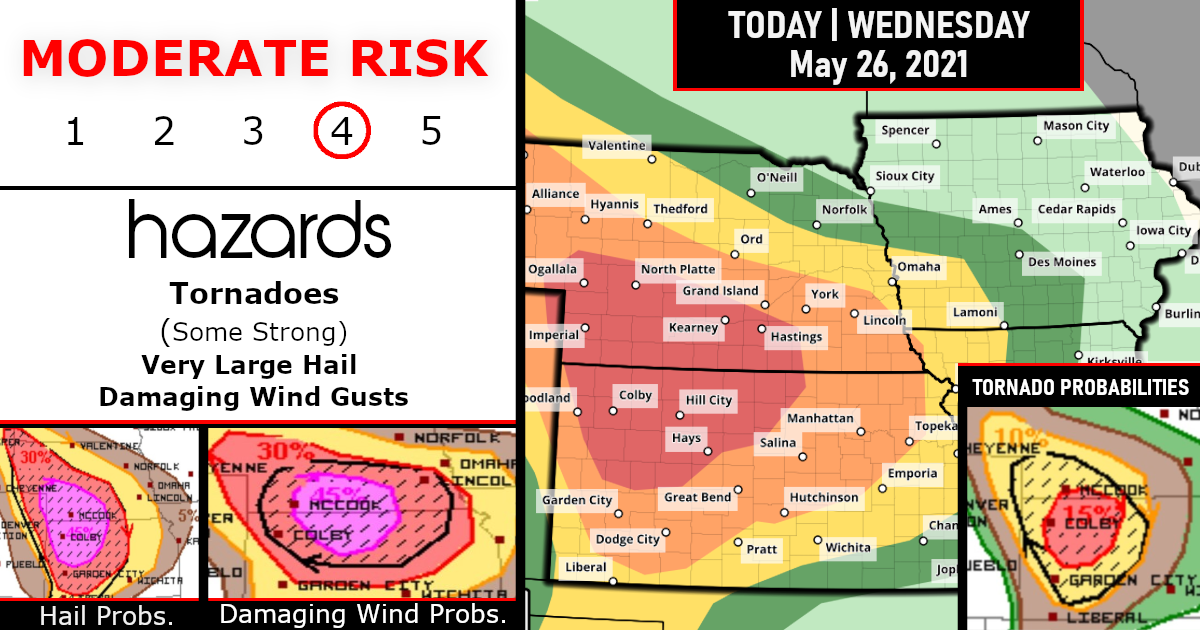 A regional outbreak of severe thunderstorms is expected across the central Great Plains this afternoon through tonight.

The greatest tornado threat, including the potential for strong tornadoes, is expected between 5 to 11 PM CDT. Intense damaging winds and very large hail are expected as well.

There is currently a moderate risk of severe weather for parts of Nebraska and Kansas.

This area, which includes cities such as Hastings and North Platte, Nebraska, has a population of around 285,000, according to the National Weather Service’s Storm Prediction Center.

Moderate is the fourth-highest level on the SPC’s warning system for severe thunderstorms. 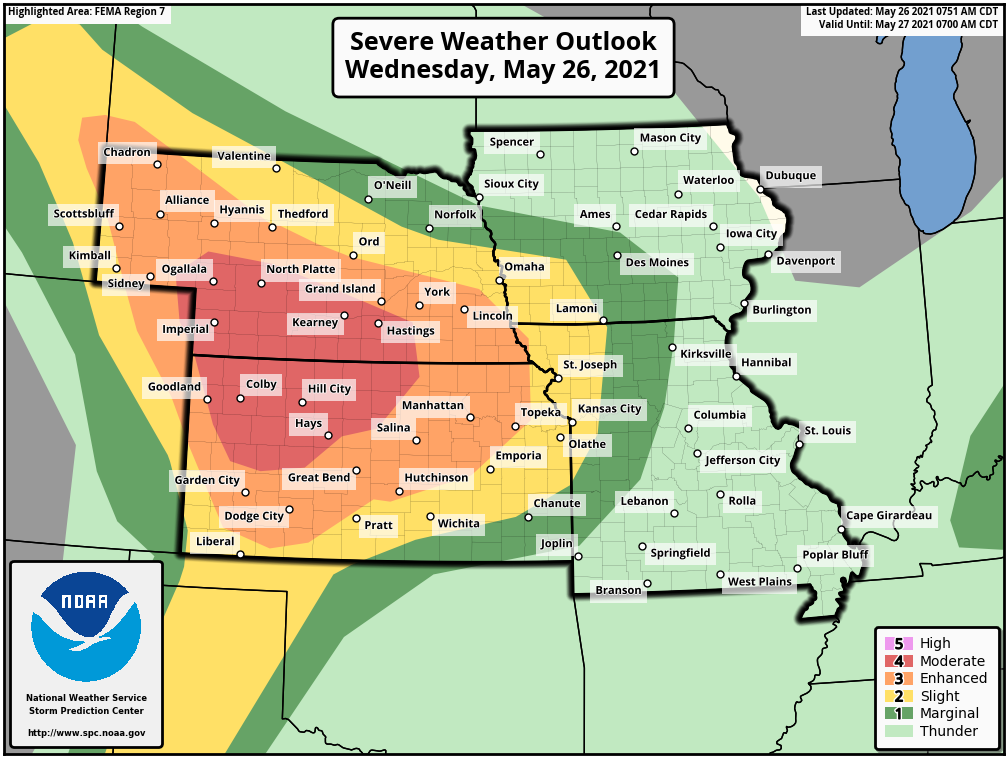 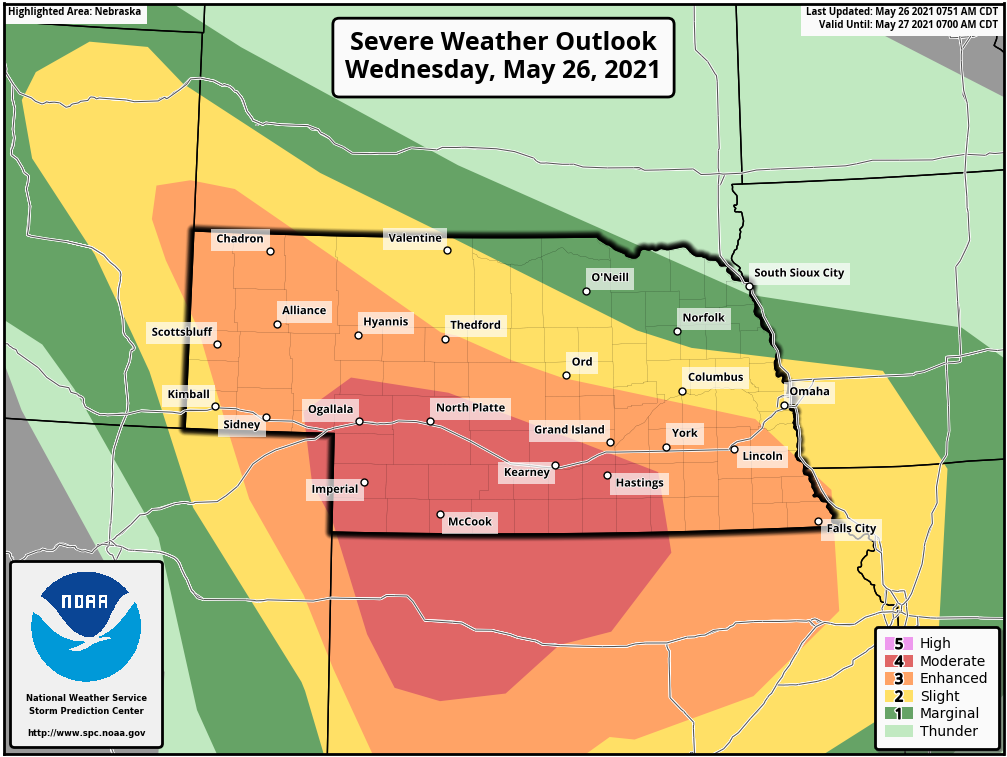 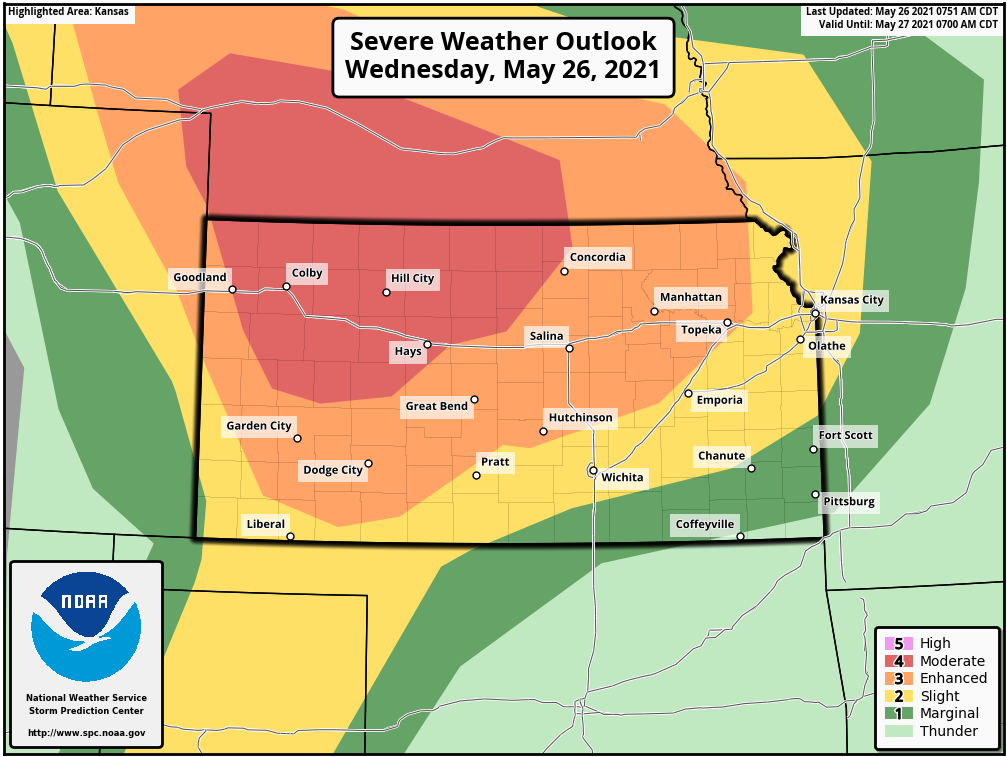 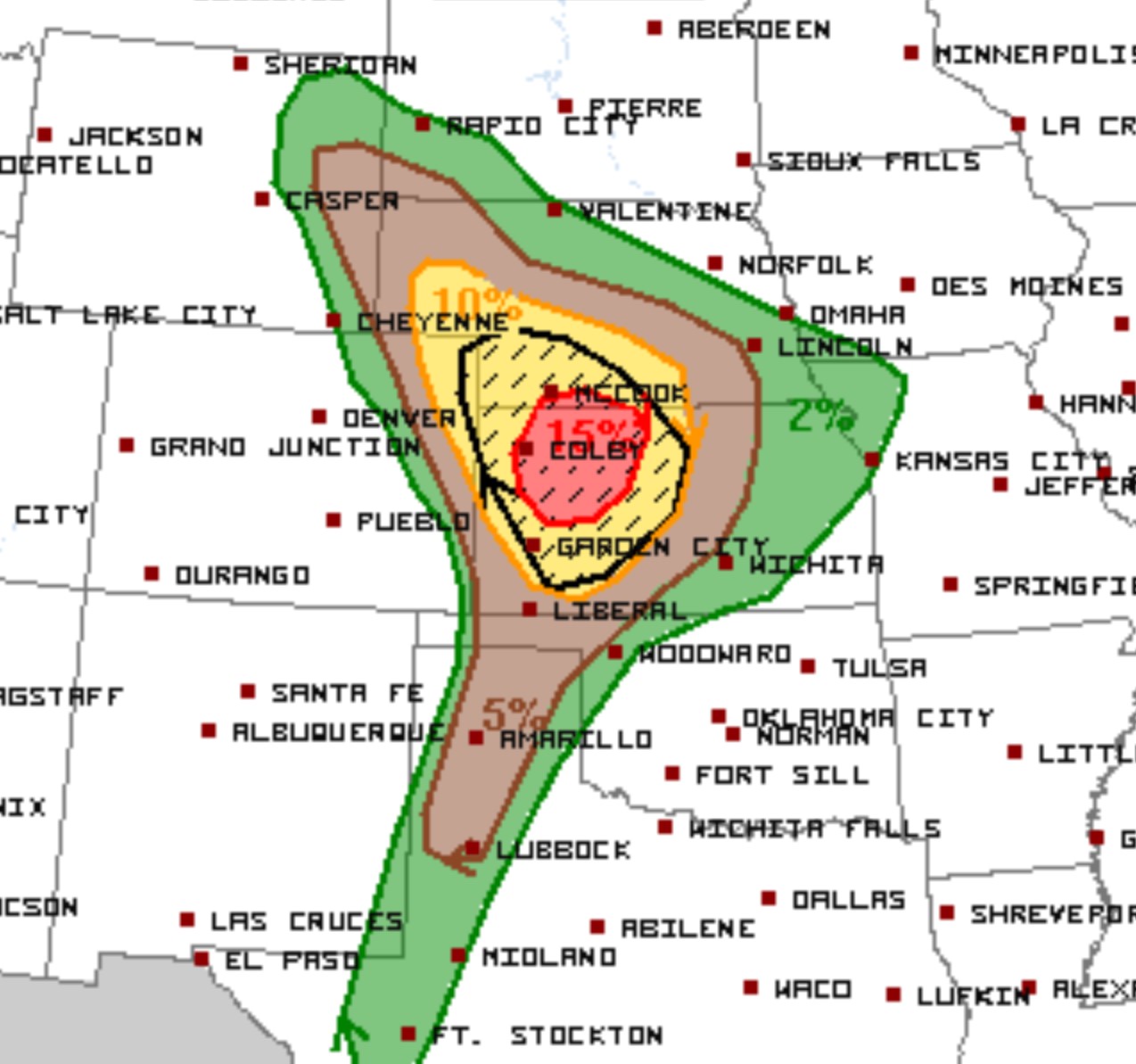 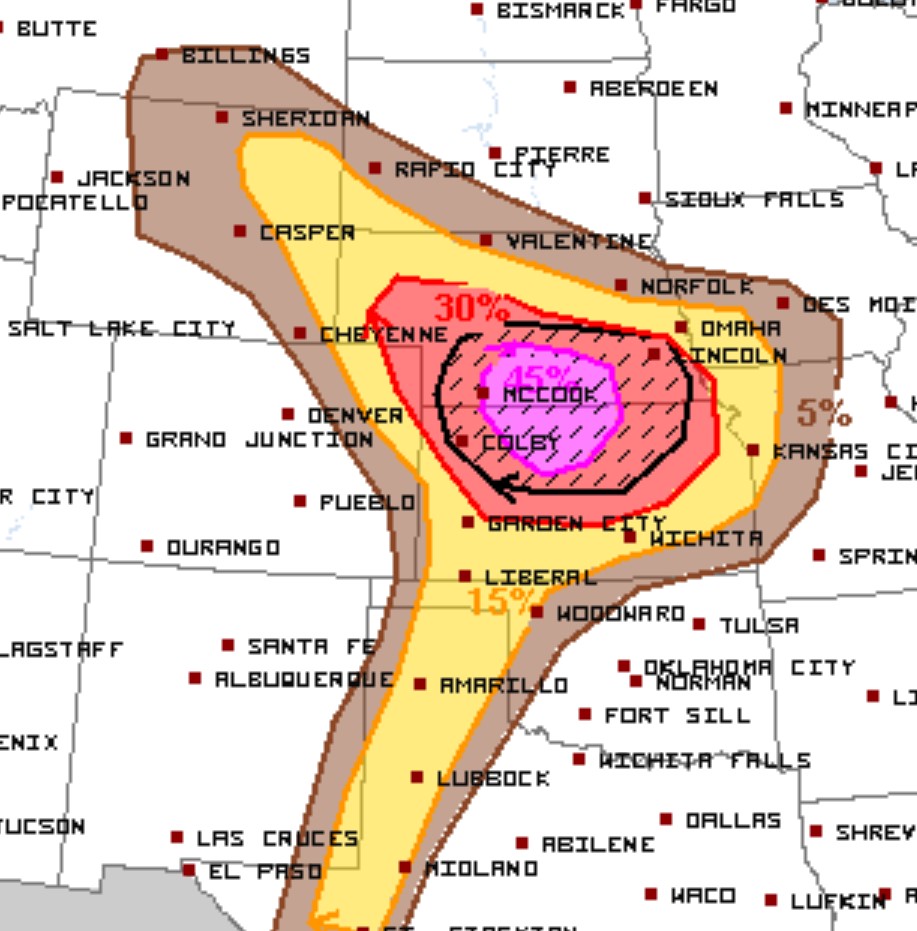 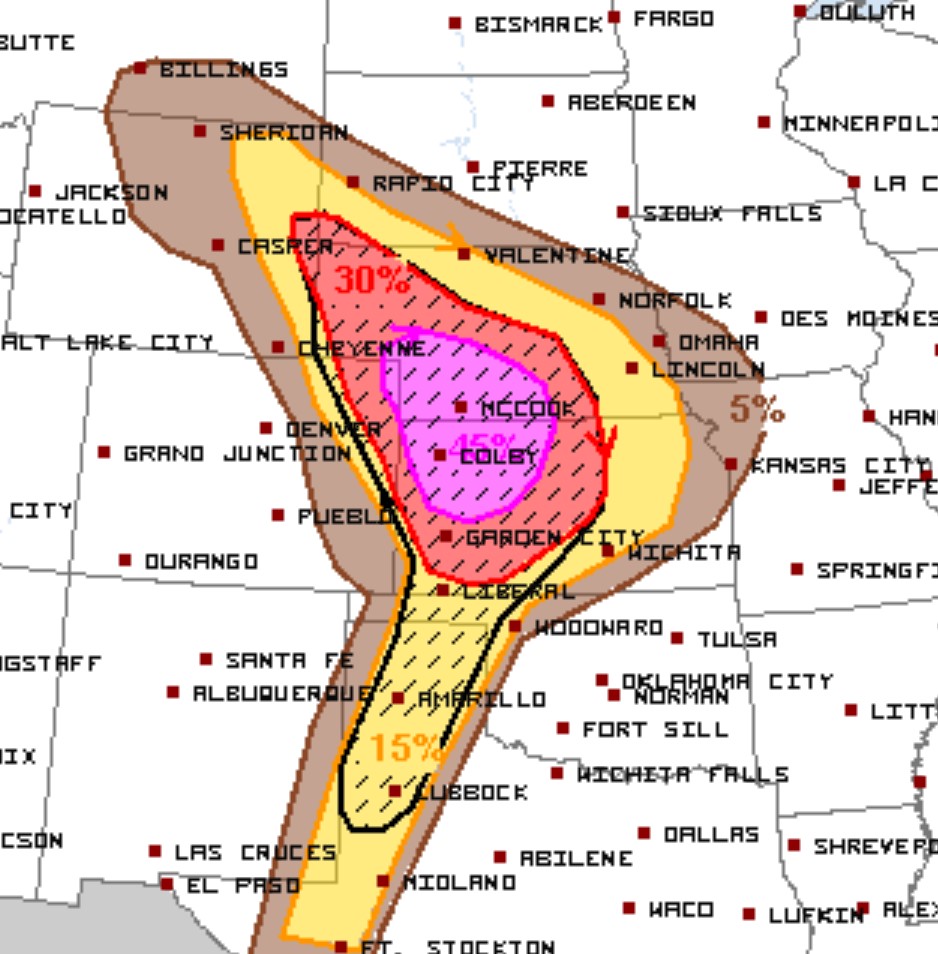 Thunderstorms will begin to develop by late afternoon. As the storms first develop, the main threat will be large hail.

By the evening and overnight, individual thunderstorms are likely to merge into a cluster. This will significantly increase the threat of damaging wind gusts and a few tornadoes.

Farther south, there will also be a threat of severe weather in the Oklahoma and Texas panhandles. Thunderstorm coverage is not expected to be as widespread, but wind, large hail, and a tornado or two will be possible.

A shortwave trough over the northern Rockies should reach the Dakotas by 12Z tomorrow. An attendant belt of enhanced mid-level southwesterlies should overspread WY to the Dakotas this afternoon. Meanwhile, a confluent belt of enhanced southwesterlies in the southern stream will become centered from AZ/NM to the central High Plains. A surface cyclone will initially deepen over southeast WY as a warm front advances north across KS and NE.

Early afternoon thunderstorm development is expected in advance of the shortwave trough across north-central WY and far southeast MT, with additional development a couple hours later farther east-southeast in eastern WY near the surface low. An initially narrow surface-based buoyancy plume should broaden on continued low-level moist advection from the southeast, yielding development and intensification of supercells across the WY/SD/NE border area by late afternoon.

Farther south, the most likely scenario is for discrete supercells developing across parts of northeast CO and at the apex of the thermal ridge along the dryline near the southeast CO/west-central KS border by late afternoon.

This activity should impinge on a plume of large buoyancy with MLCAPE of 2500-3500 J/kg. In addition, a strengthening low-level jet between 00-03Z renders substantial concern for potential long-track supercells capable of significant tornadoes centered on the northwest KS vicinity this evening.

With time, numerous supercell structures will likely grow upscale as they mature along/south of the warm frontal zone, aided by the strong low-level jet.

An intense MCS may evolve by late evening with bowing structures, yielded an increasing threat for significant severe wind gusts across portions of KS and southern NE into the overnight. This wind threat may spread as far east-southeast as the Lower MO Valley by 12Z tomorrow. Variance in CAM guidance appears greater-than-normal regarding the aforementioned potential convective evolution.

The 00Z HRW-NSSL and HRW-ARW both suggest that surface-based convection may develop by early to mid-afternoon across parts of western to central KS, overturning the air mass prior to substantial strengthening of the low-level jet.

This would limit the likelihood of significant tornado/wind potential and coverage of all severe probabilities as far north as indicated by the current forecast. This scenario may be unlikely in the presence of mid-level ridging but appears plausible given persistent low-level theta-e advection and weak MLCIN.