HIGH RISK ISSUED | Dangerous Tornado Outbreak Is Expected in the South Today Through This Evening!

A Particularly Dangerous Situation (PDS) Tornado Watch has been issued for…

Portions of eastern Mississippi into the northwestern half of Alabama, far northwest Georgia, and far southern Tennessee 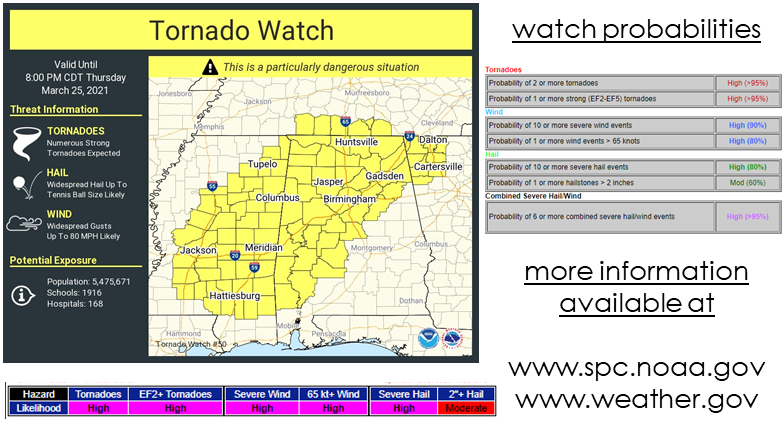 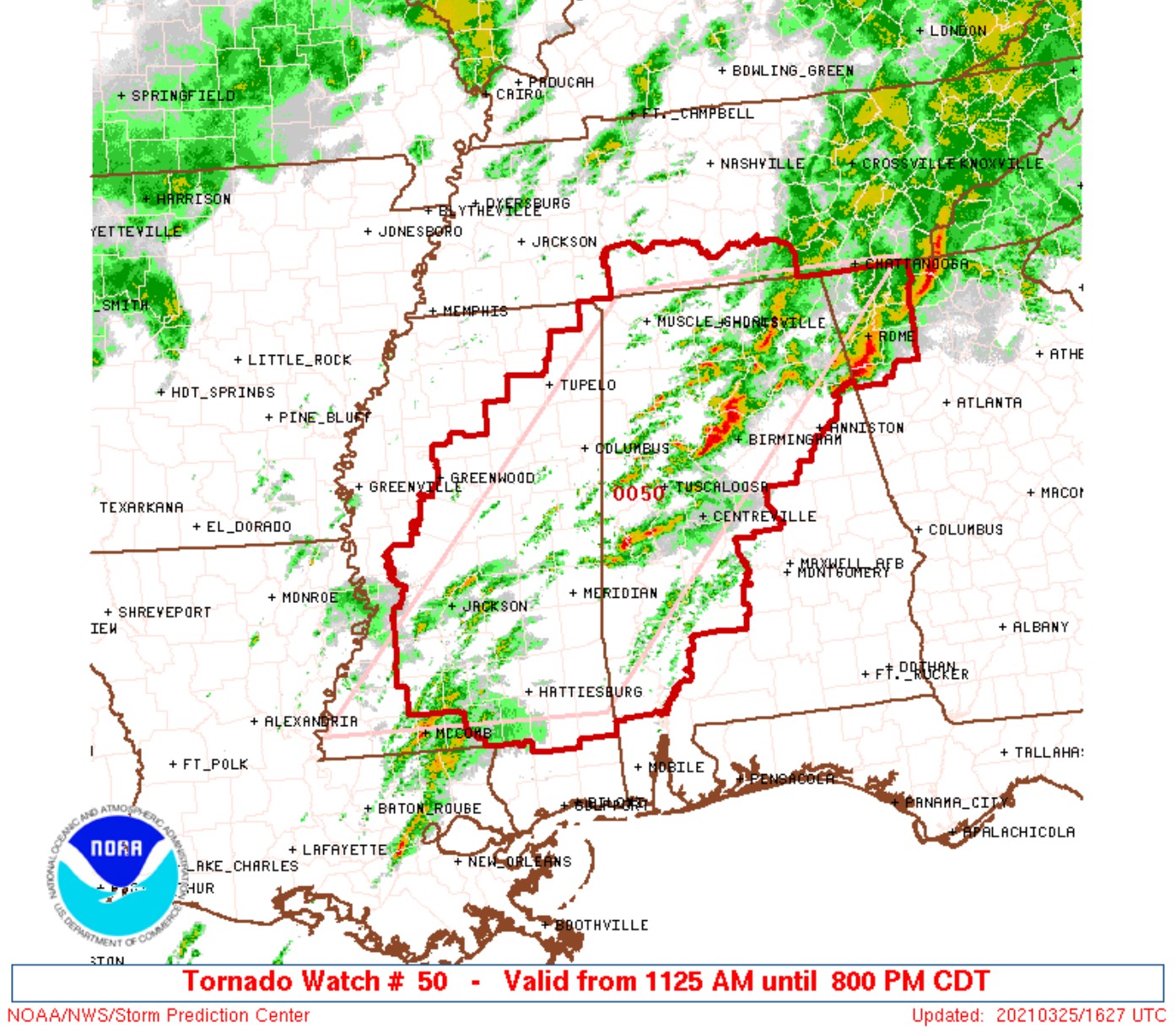 A tornado outbreak — including the threat of a few long-tracked, violent tornadoes — is expected today across Mid-South and Tennessee Valley, including portions of Mississippi, Alabama, and Tennessee!

Tornadoes, large to very large hail, and damaging winds (greater than 75 mph) to hurricane force also are possible over a broad area from the central Gulf Coast to the Ohio Valley and southern Appalachians.

Scattered large hail to baseball size(greater than 2 inches) is expected with any storm that develops today in the highlight risk areas! 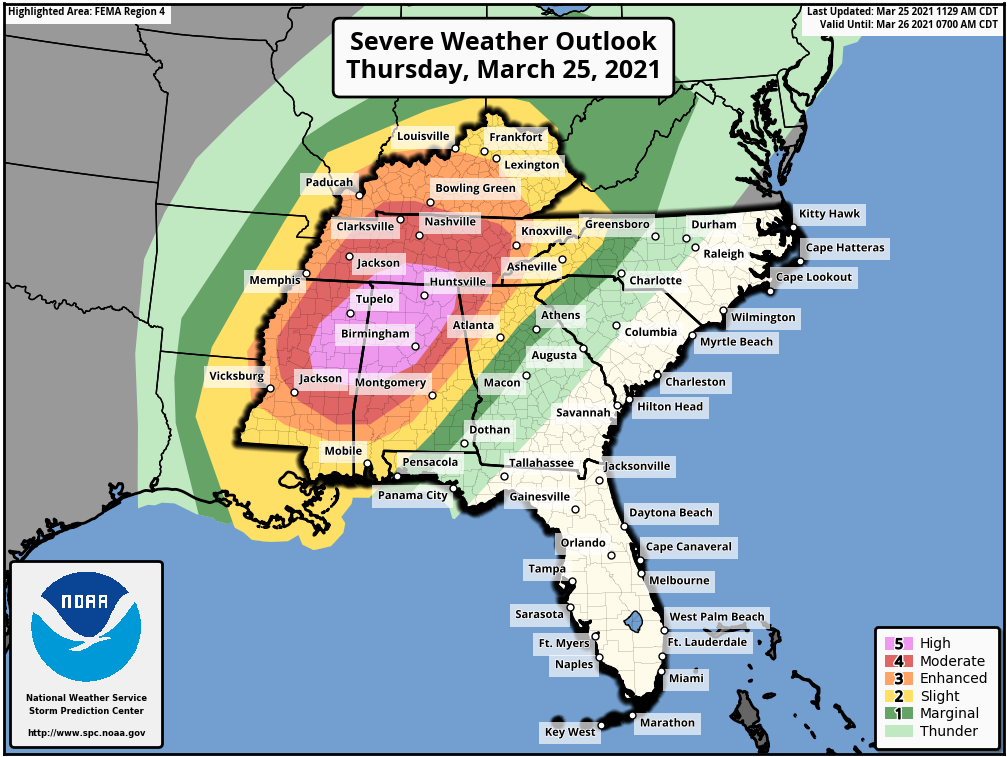 For the second time in a week, NOAA’s Storm Prediction Center (SPC) has issued a rare “high risk” severe weather. This corresponds to a level 5 on the National Weather Service’s severe weather alert scale.

In its Thursday morning discussion, the SPC said “any relatively discrete supercells will be capable of multiple tornadoes, some long-tracked and strong to violent (EF2-5 possible), with considerable destructive potential”.

As a note, The lowest level or 1 corresponds to a marginal risk, while a level 5 represents a high risk.

The last time that SPC issued two high risks for severe weather in the month of March was 30 years ago in 1991. 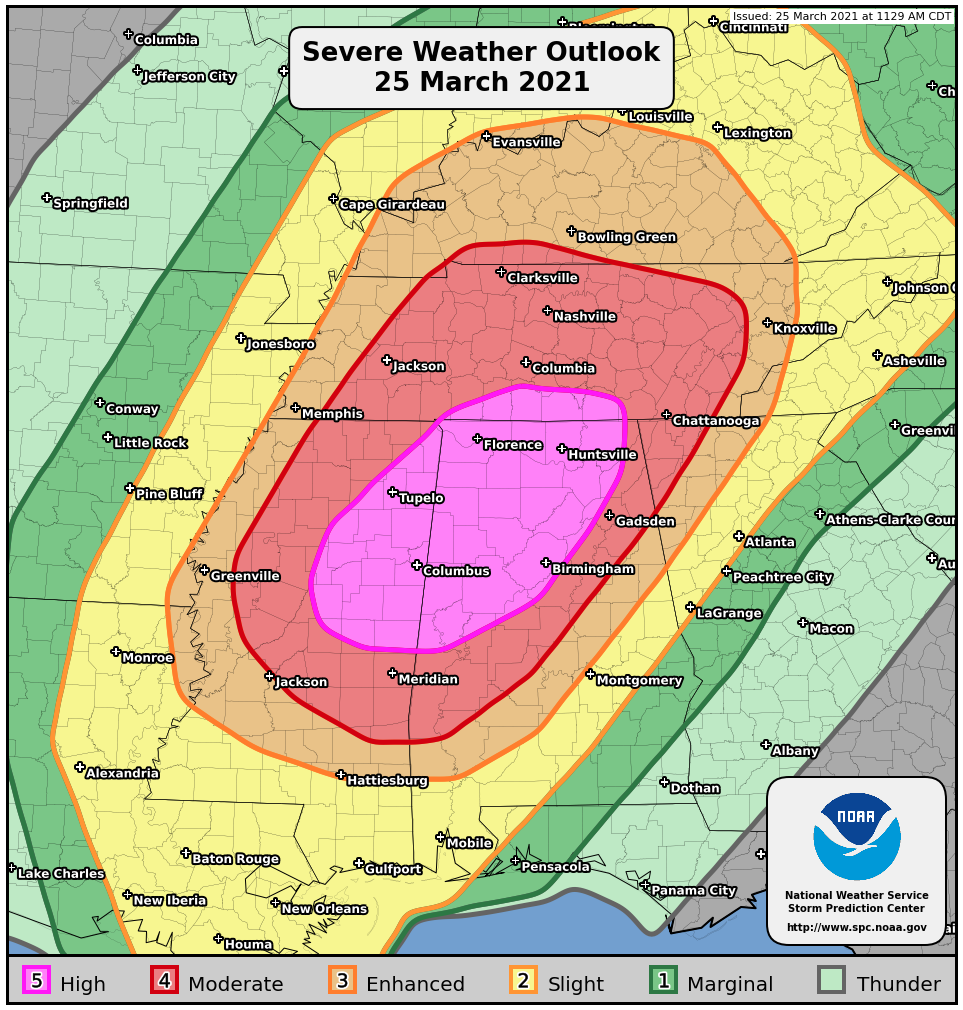 Scattered showers and thunderstorms are already spreading across parts of the South this morning. The threat of widespread severe storms will increase substantially by early afternoon. As mentioned, the high-risk area shaded in pink in the map above has the greatest likelihood of long-tracked, intense tornadoes and very large hail. That includes Tupelo and Columbus, Mississippi, and Huntsville and Muscle Shoals, Alabama.

However, severe storms will also be dangerous from other parts of the South to as far north as the Ohio Valley. Several tornadoes (some possibly strong), damaging winds, and large hail are all potential threats. Jackson, Mississippi, Birmingham, and Huntsville, Alabama, and Memphis and Nashville, Tennessee, are all at risk for significant severe weather.

A few severe storms could reach as far north and east as the upper Ohio Valley and the Atlanta metro area Thursday overnight into early Friday.

Below is the latest Outlook Probabilities by the Storm Prediction Center! 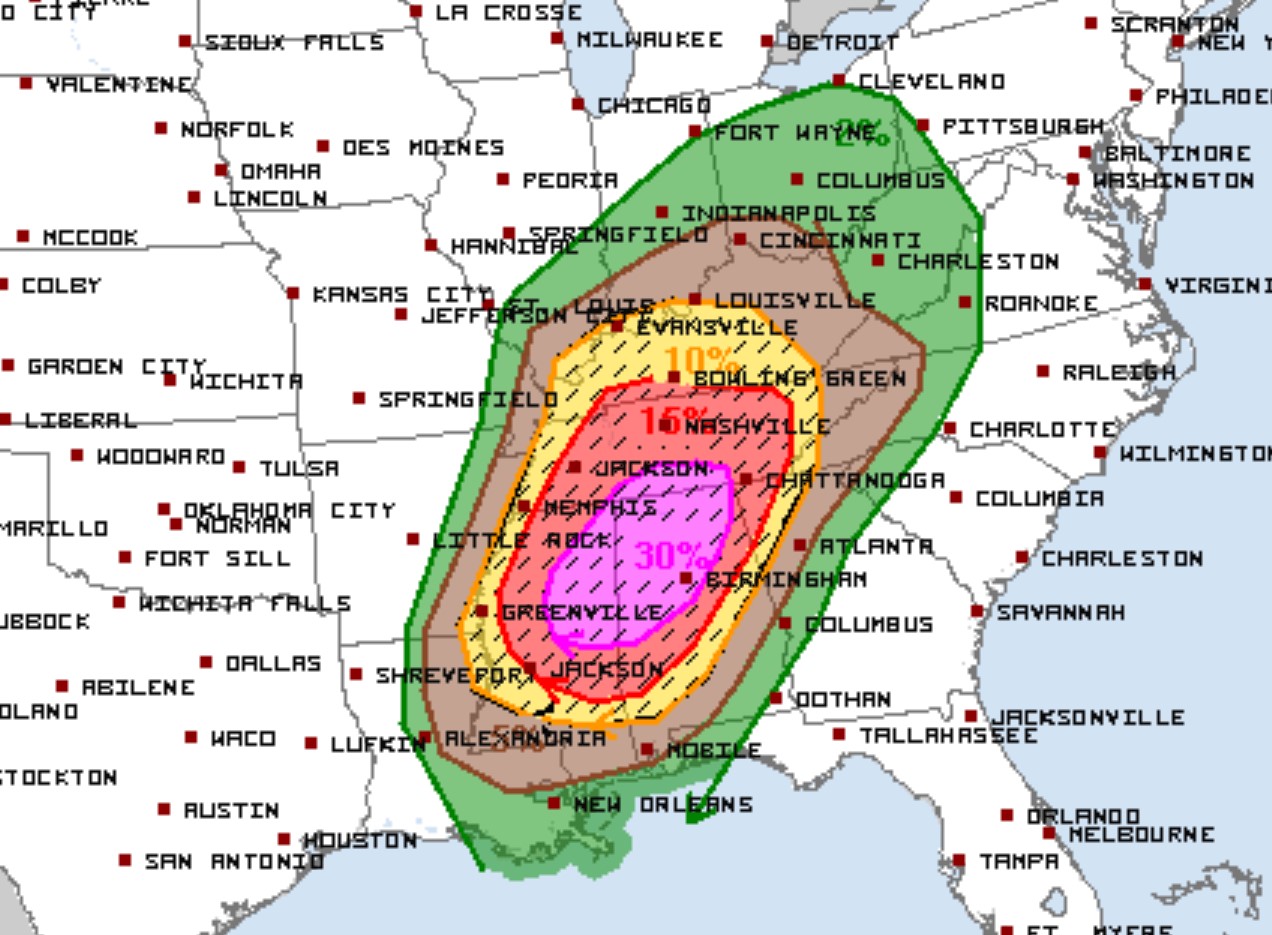 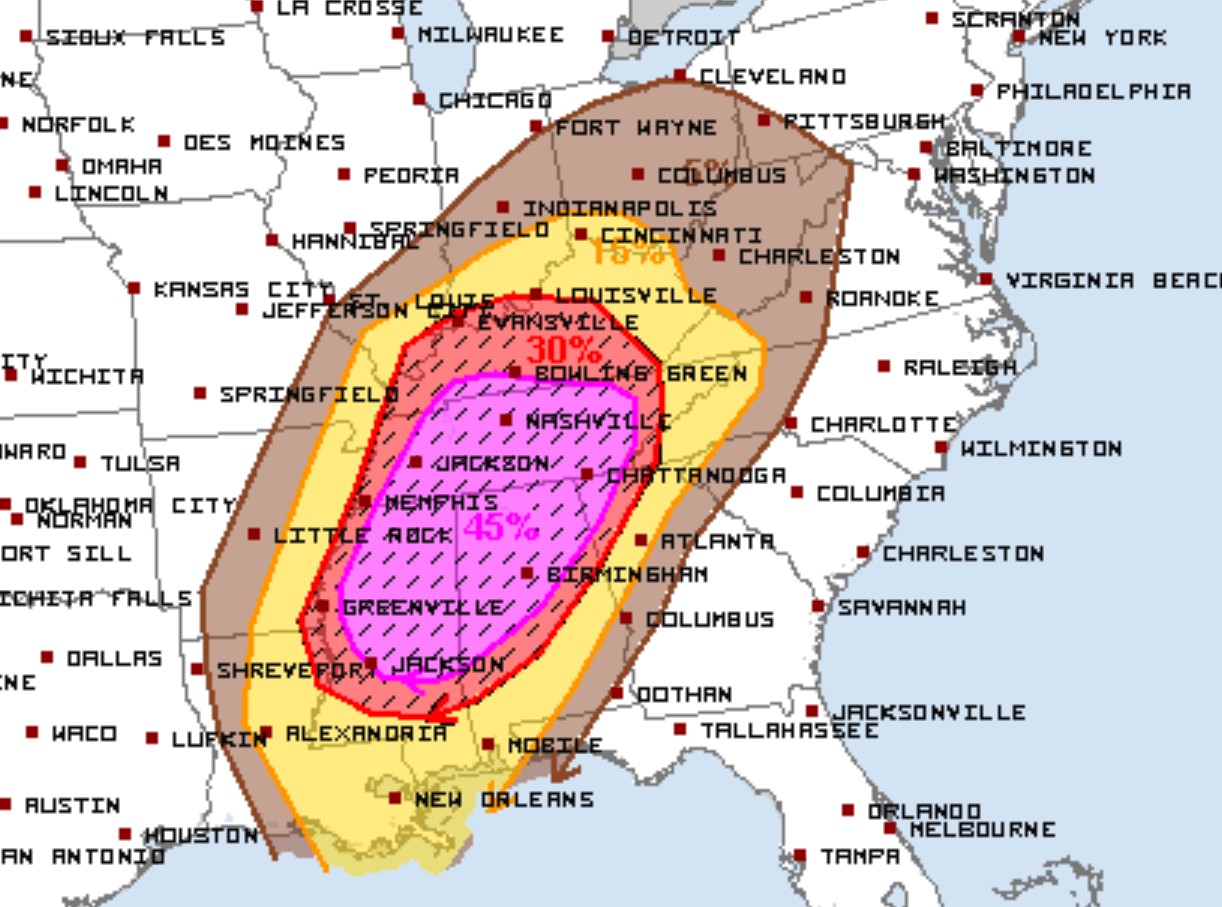 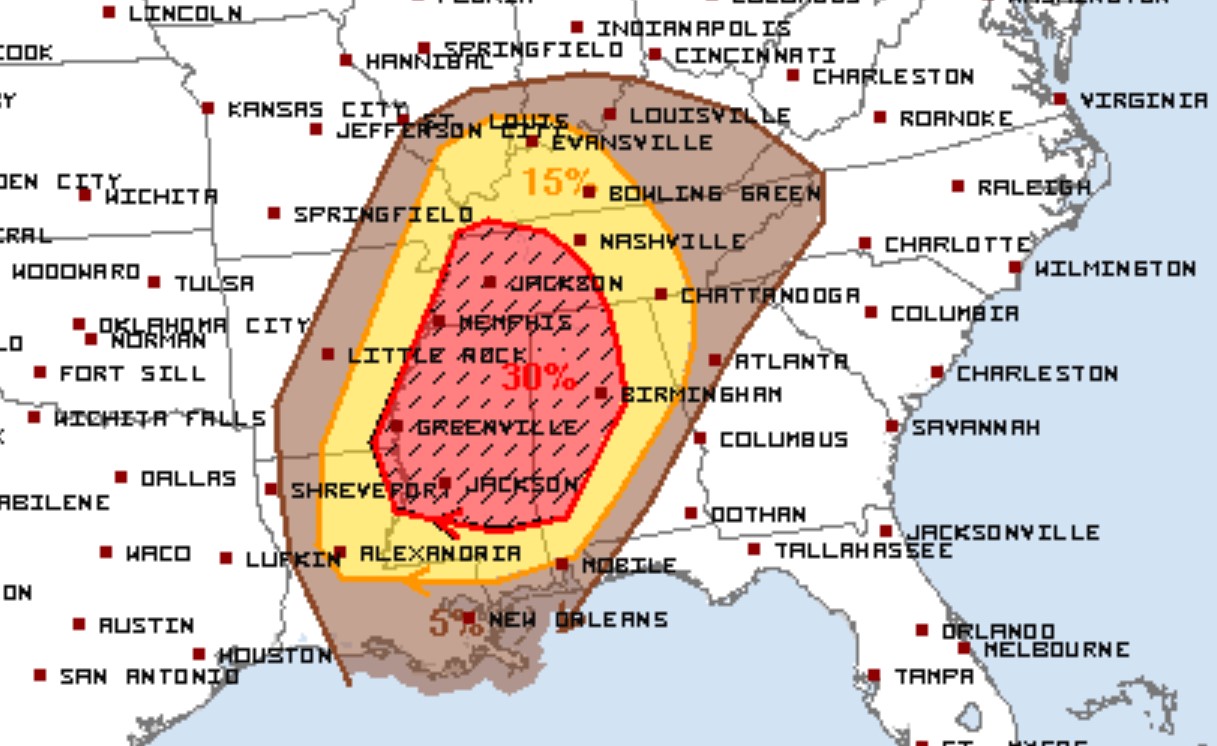 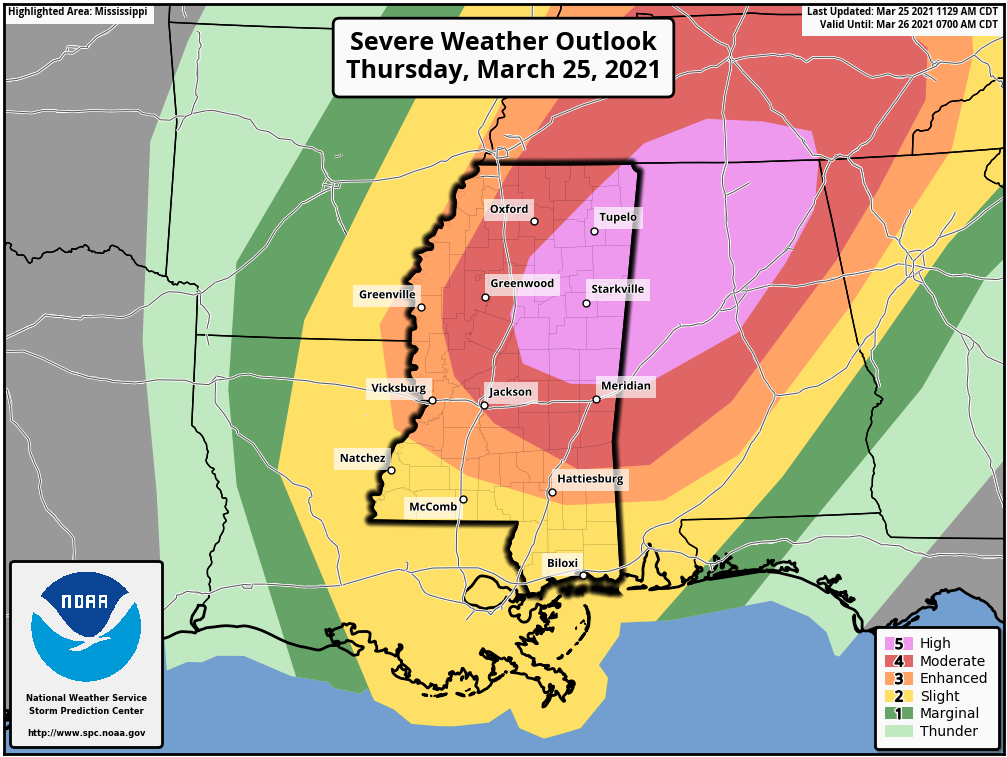 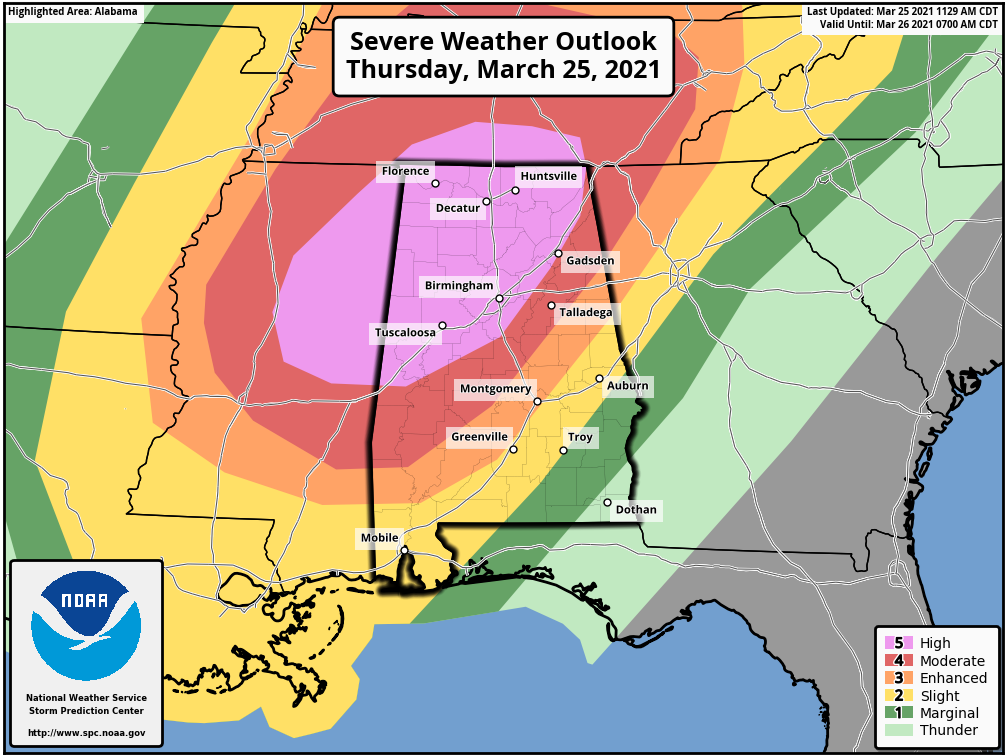 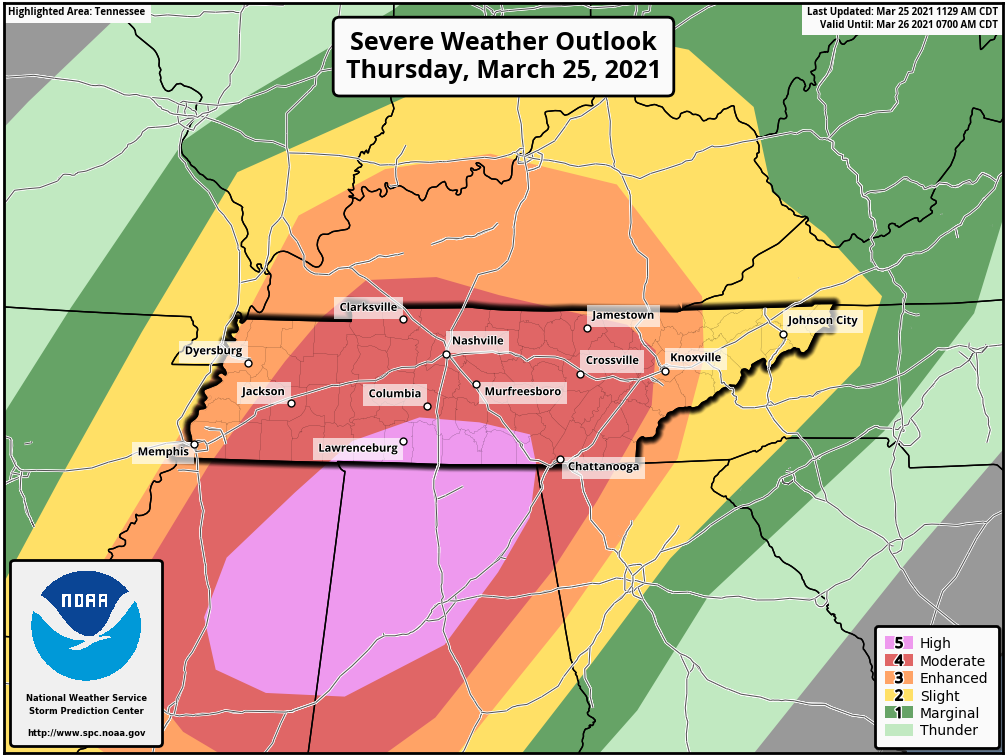