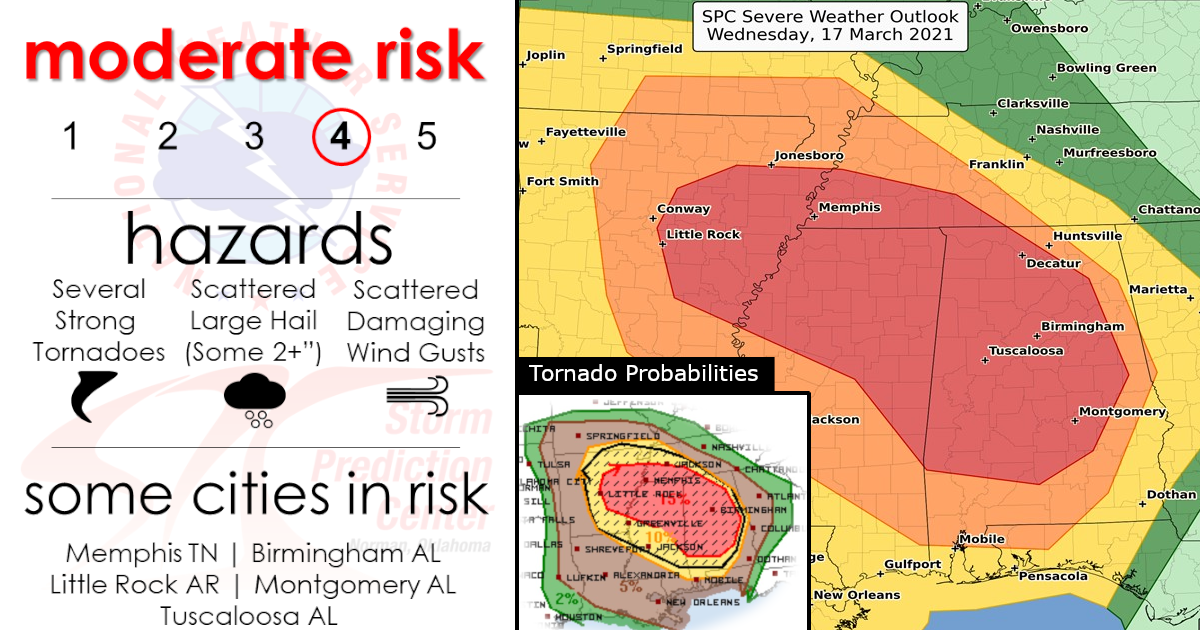 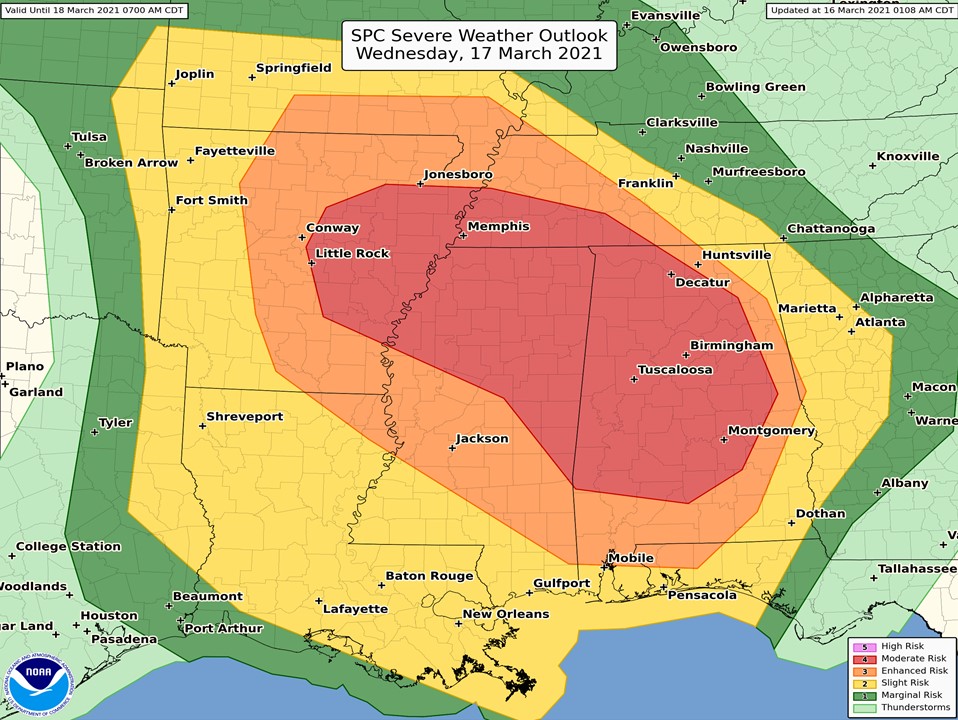 Confidence continues to increase that a broad area of substantial severe weather potential, including risk for several strong tornadoes, scattered large hail, and damaging winds will exist Wednesday (March 17, 2021) from the Arkansas/Louisiana vicinity eastward across the central Gulf Coast states and the southern Appalachians. This severe risk will likely continue into Wednesday night across Alabama and the vicinity.

(Keep scrolling down for a further closer look) 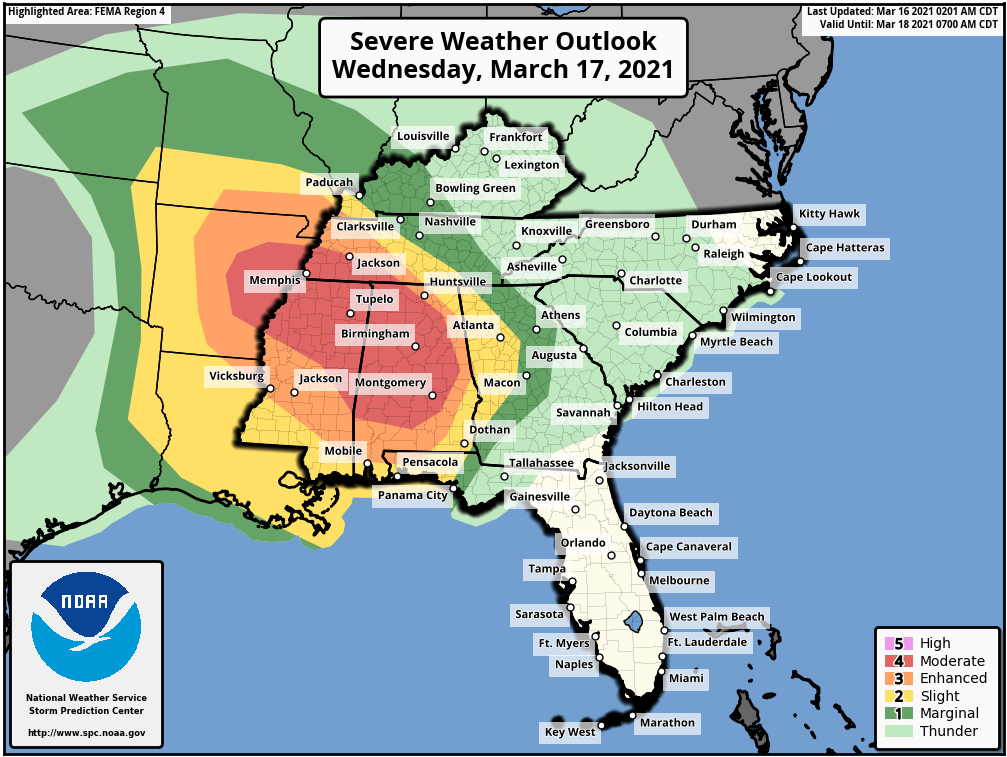 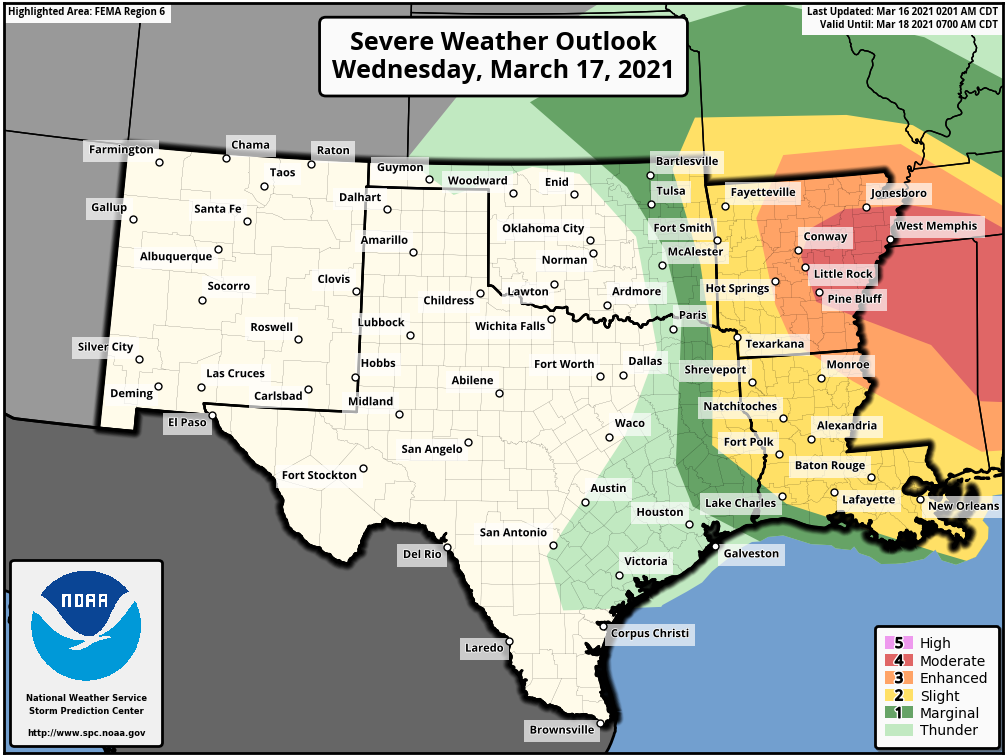 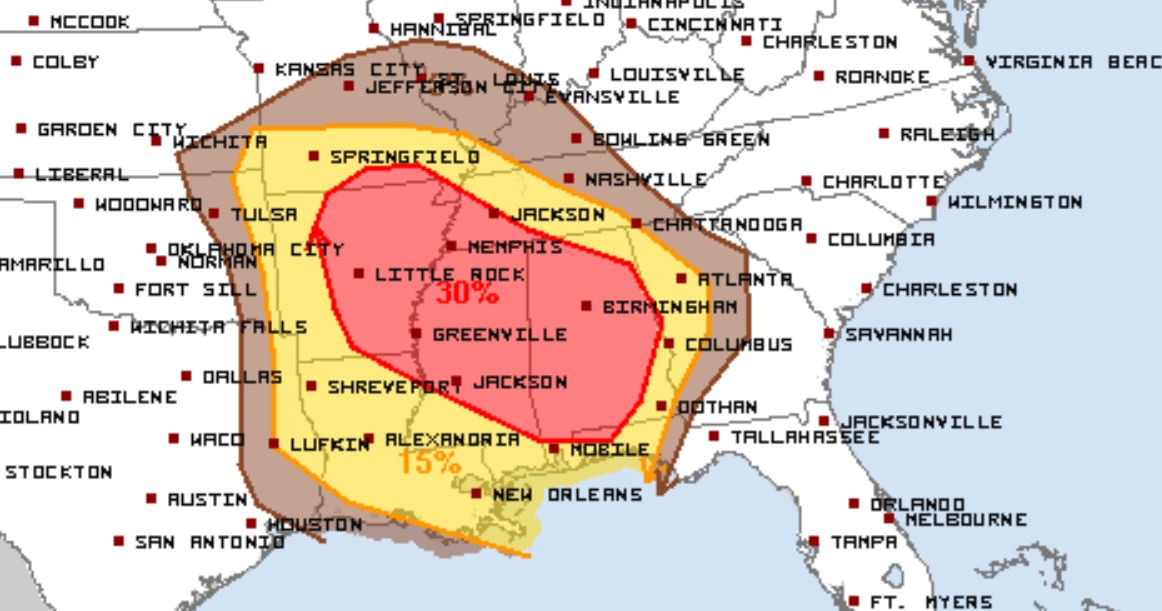 Severe storms are expected to become more numerous through the afternoon and into the nighttime hours from the central Gulf Coast and lower Mississippi Valley to possibly as far east as western Georgia and as far north as Tennessee and the lower Ohio Valley.

The greatest threat of tornadoes is expected from parts of central and eastern Arkansas and far southeast Missouri into western Tennessee, northern and central Mississippi, and much of Alabama. Please note, the possibility of stronger tornadoes are in this corridor.

(Keep scrolling down for a further closer look and more info) 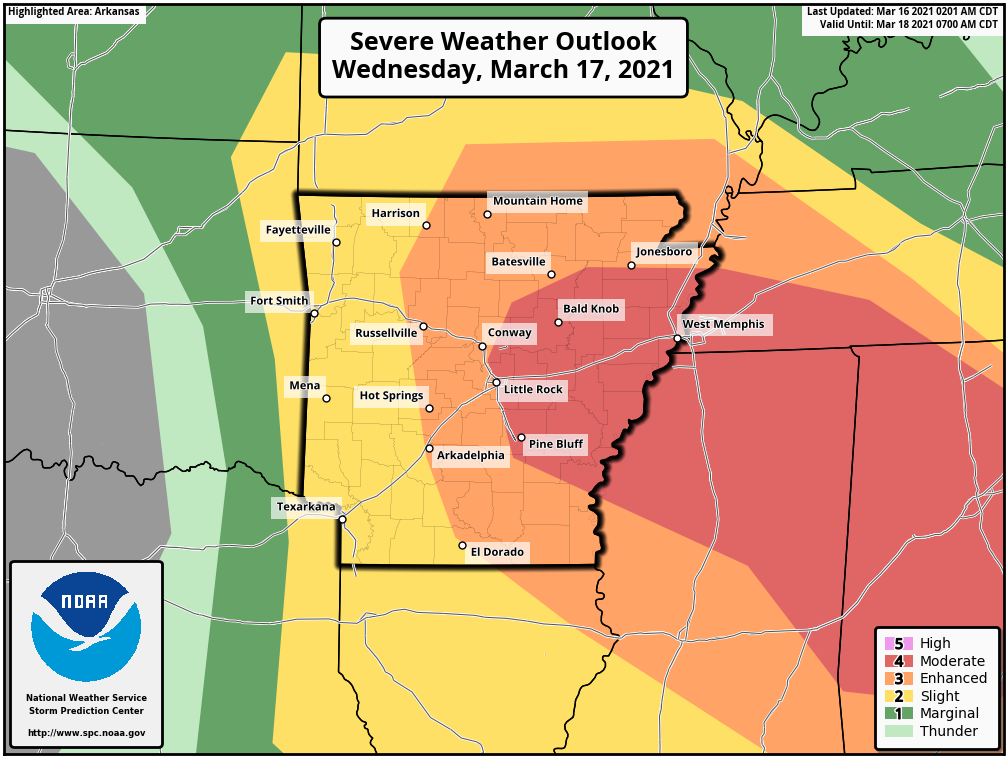 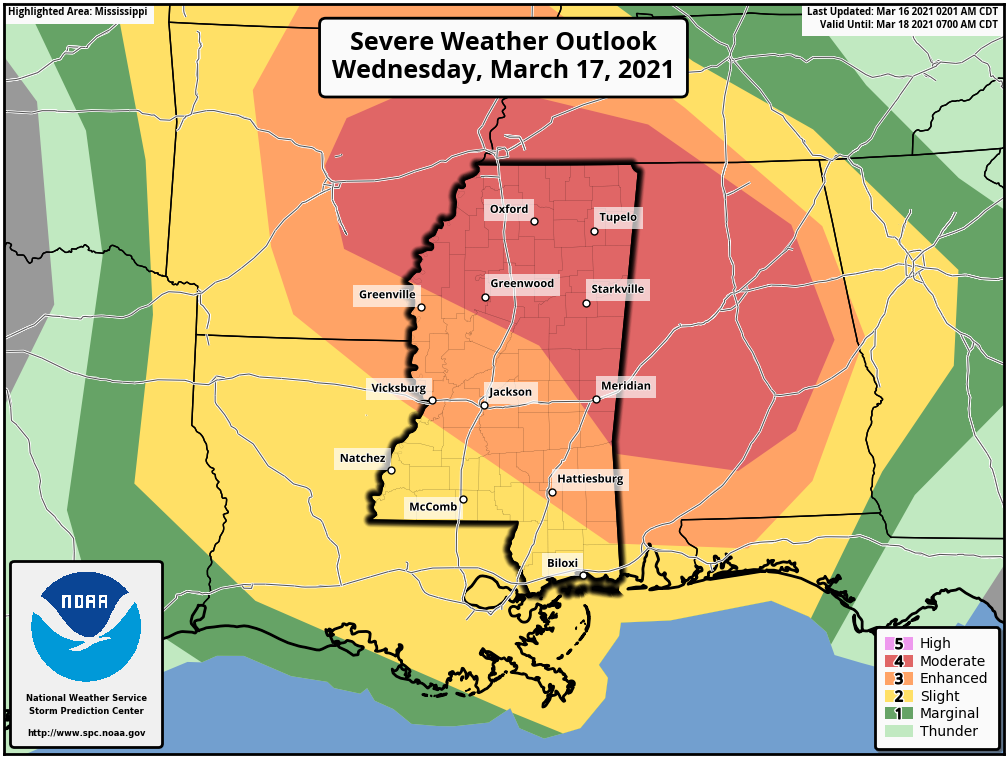 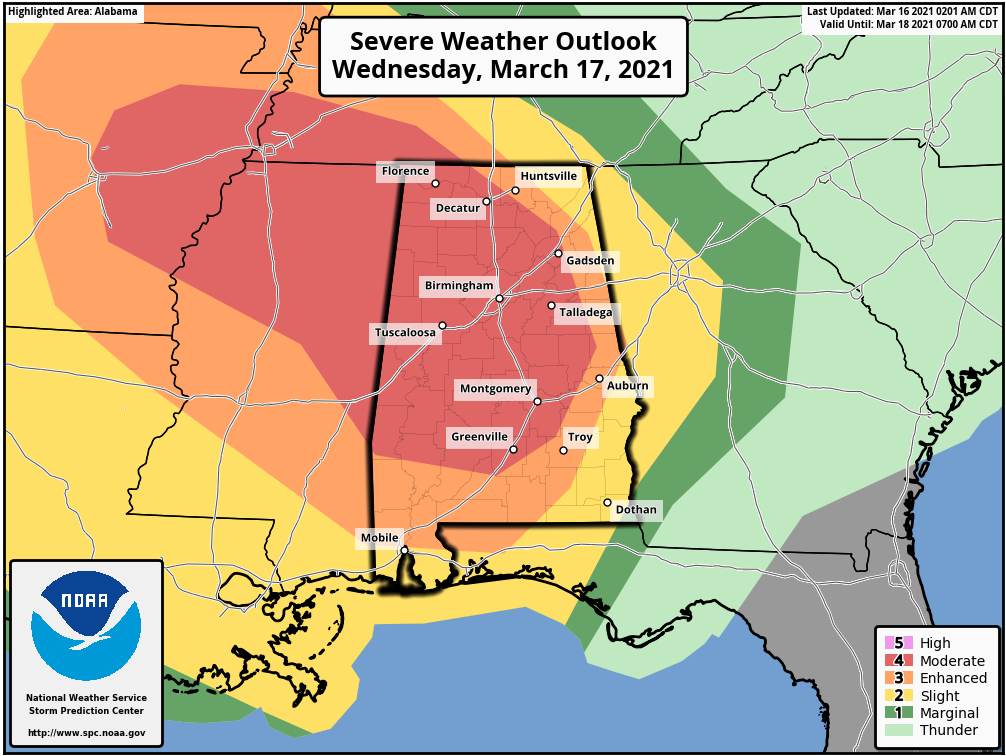 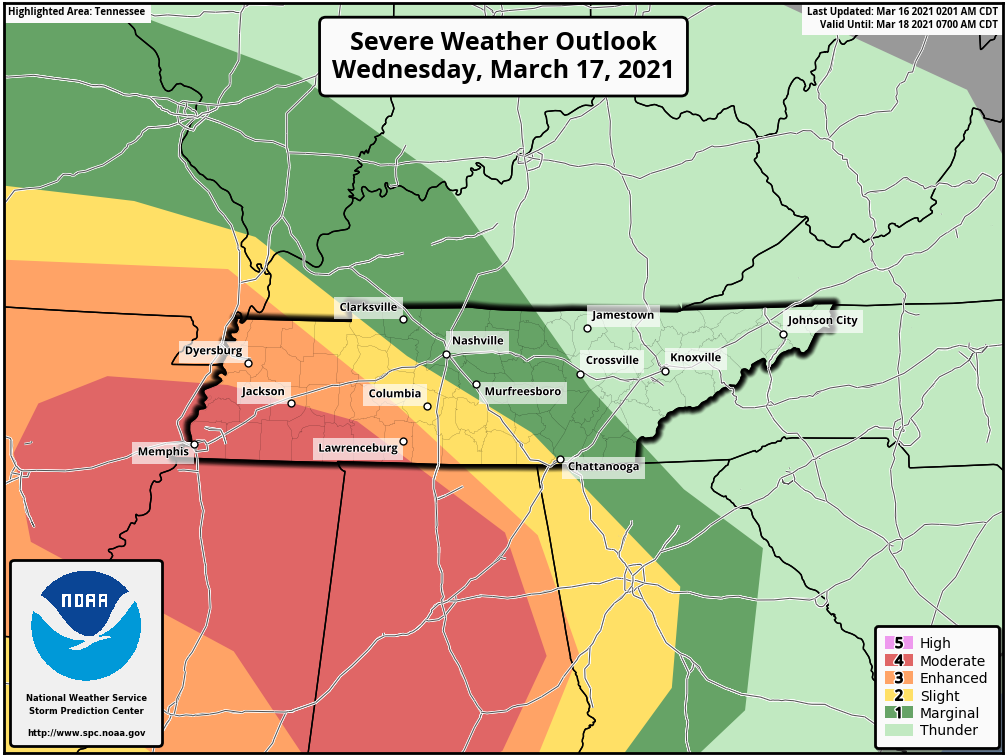 Localized flash flooding is also a potential threat in the South. 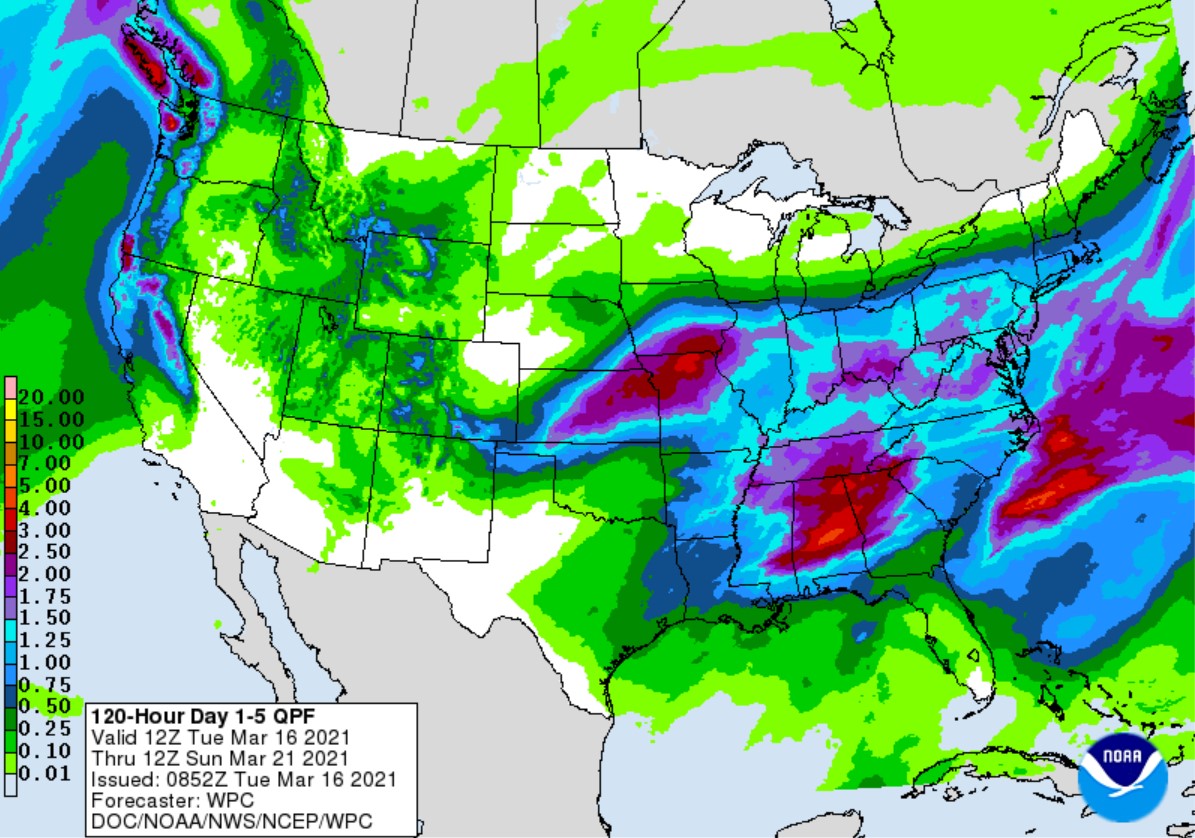 A compact/vigorous upper low initially over the Oklahoma area is forecast to move steadily eastward through the period, spreading strong flow aloft and a broad zone of enhanced ascent across the south-central and into the southeastern CONUS.

This low will reach the Ozarks overnight, flanked by ridging across the Rockies, and along the East Coast. At the surface, a 998 mb low is progged to advance eastward along a similar track, crossing northern Oklahoma/southern Kansas through the day, and then the Ozarks overnight.

A trailing cold front will shift from eastern portions of the southern Plains and across Arkansas/Louisiana through the afternoon, and then across the Tennessee Valley and central Gulf Coast states through the end of the period.

Meanwhile, a warm front extending eastward from the low across northern Arkansas/southern Missouri and then east-southeastward across the Tennessee Valley into Georgia will linger in place on its eastern fringe, but will lift slowly northward in advance of the progressing low.

These two fronts will outline a broad/moist warm sector, which will gradually destabilize through the day supporting a widespread/potentially significant severe weather event.

Scattered showers and thunderstorms are forecast to be ongoing ahead of the cold front from eastern Oklahoma/western Arkansas southward into east Texas, and east-southeastward along the warm front across the Tennessee Valley area to the southern Appalachians. As the synoptic system advances, convection over the central Gulf Coast region/Southeast should remain generally north of the warm front, while some decrease in pre-cold-frontal convection is also expected through the morning.

This should permit some heating of the moist (generally mid 60s dewpoints) warm-sector boundary layer, pushing mixed-layer CAPE values into the 1000 to 2000 J/kg range by early afternoon.

New storm development is expected to occur from the southwestern Missouri vicinity southward across the Arklatex region by early afternoon. Strong shear — including veering of the wind field with height from southerly to southwesterly — will support ready evolution of rotating updrafts, with some long-lived storms likely evolving with time. Along with large hail potential, locally damaging winds will be possible, along with a steadily increasing tornado risk through the afternoon.

As storms move into central and eastern Arkansas, at least a few intense supercells are expected, within the broader area of storms.

Potential for a couple of significant tornadoes are apparent, with this risk spreading into southwestern Tennessee and northern Mississippi with either pre-cold-frontal storms moving eastward into the region, or with other cells developing in a zone of increasing low-level warm advection in the warm sector/near the warm front.

During the evening and into the overnight hours, substantial strengthening of the low-level southerlies across the central Gulf Coast region is expected. While some diurnal decrease in instability is expected, this should be more than offset by the increasing low-level and deep-layer shear.

As such, risk for additional/significant tornadoes are anticipated to last through the overnight hours focused particularly across much of Alabama. Hail and relatively widespread damaging winds will also be possible across this same region.