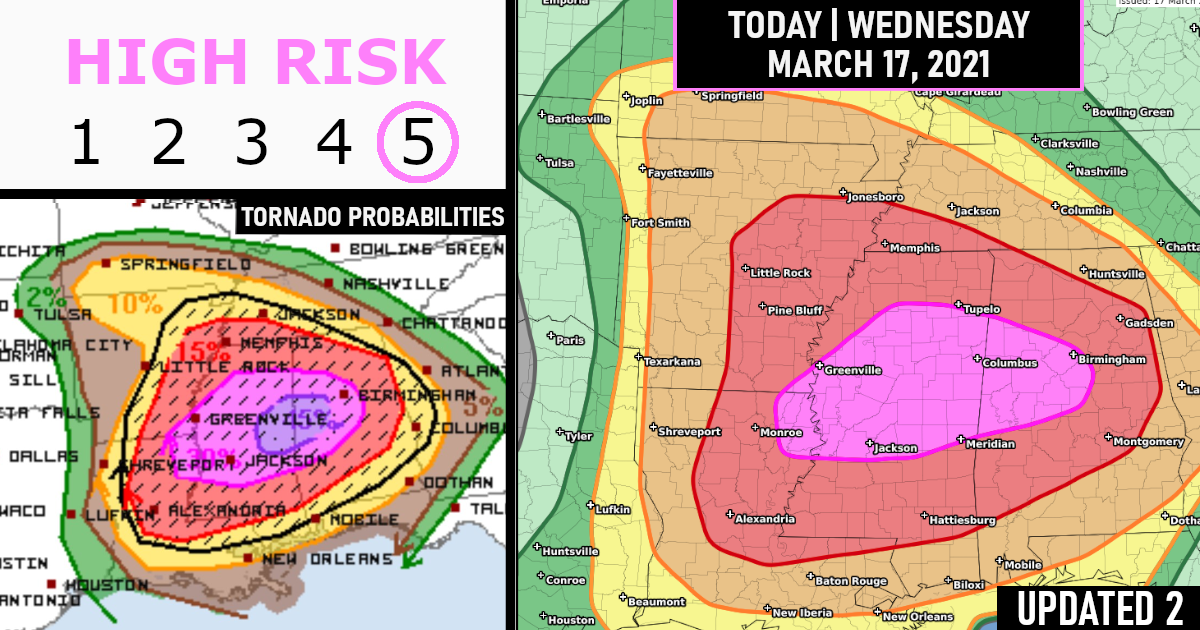 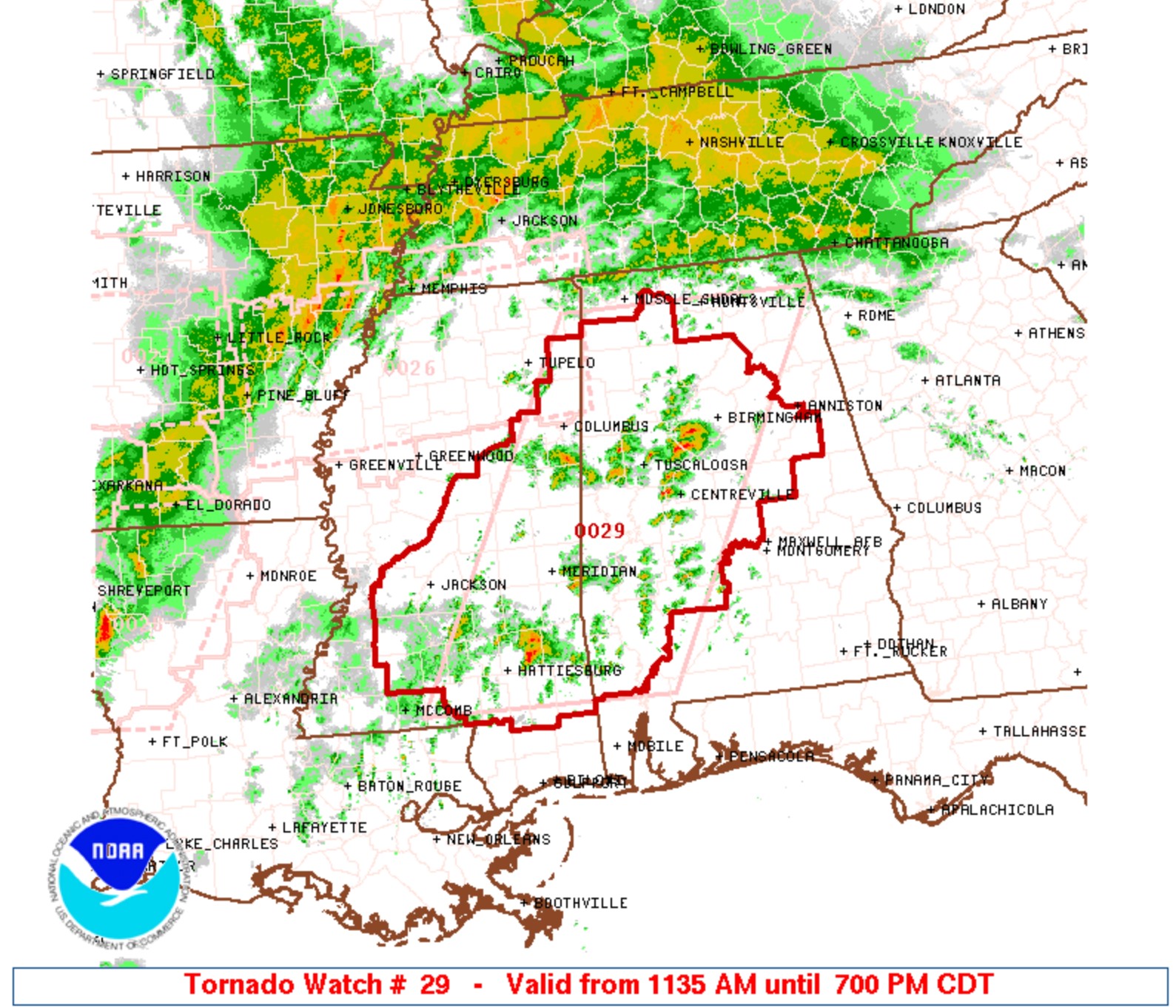 An outbreak of severe thunderstorms including, several long-track intense tornadoes, large hail, and damaging wind gusts is expected across portions of the Mississippi Valley and Southeast Today, Wednesday, March 17th, 2021!

A High Risk has been issued across portions of central Mississippi, northeastern Louisiana, and western Alabama. (KEEP SCROLLING TO REVIEW THE ENTIRE BLOG)

A significant tornado outbreak, with long-track, intense tornadoes is expected to begin this afternoon across parts of Louisiana and Arkansas, and then spread eastward and peak this evening into tonight across Mississippi and Alabama. 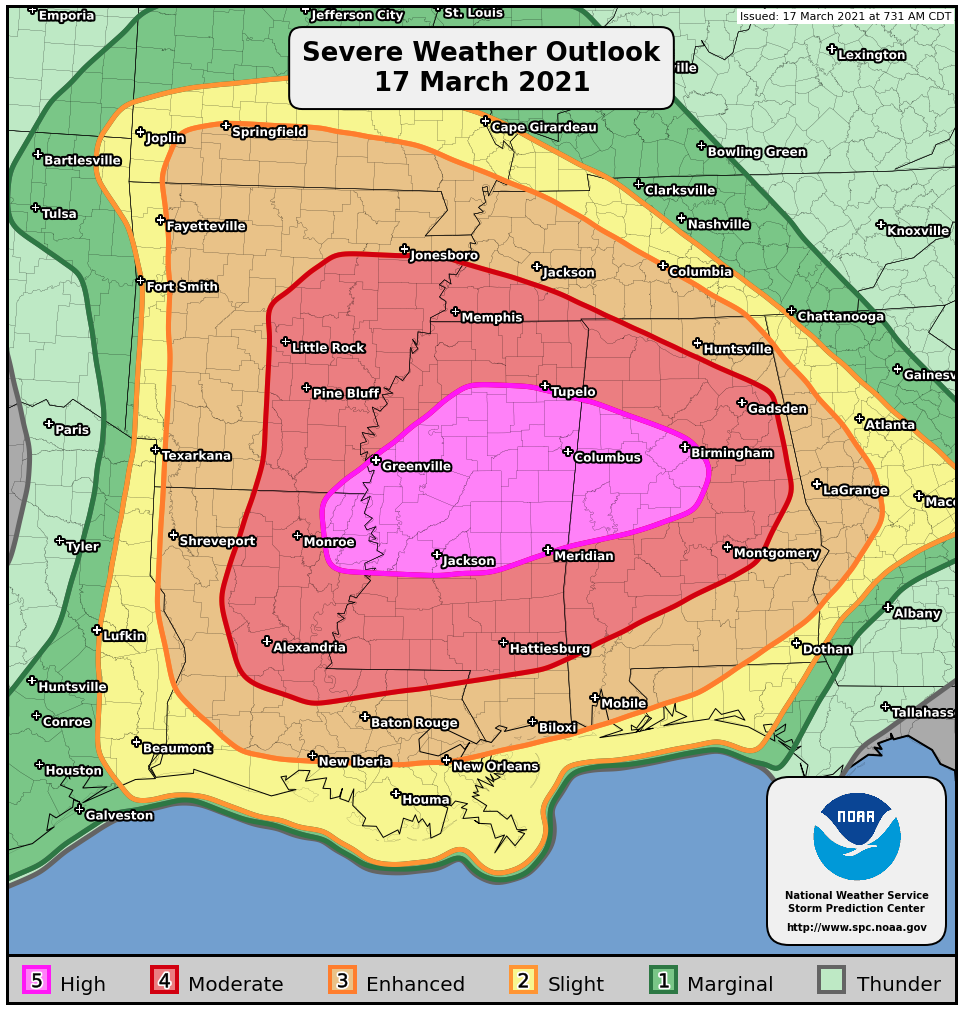 How Often Is There A High Risk?

To give an idea of how rare and how serious this situation is, for the first time since 2012, a “high risk” has been issued by the Storm Prediction Center (SPC) in the month of March. No high risk had been issued in any month since May 2019.

A high risk is reserved for days on which significant severe weather is expected, its the highest level possible – Level 5/5 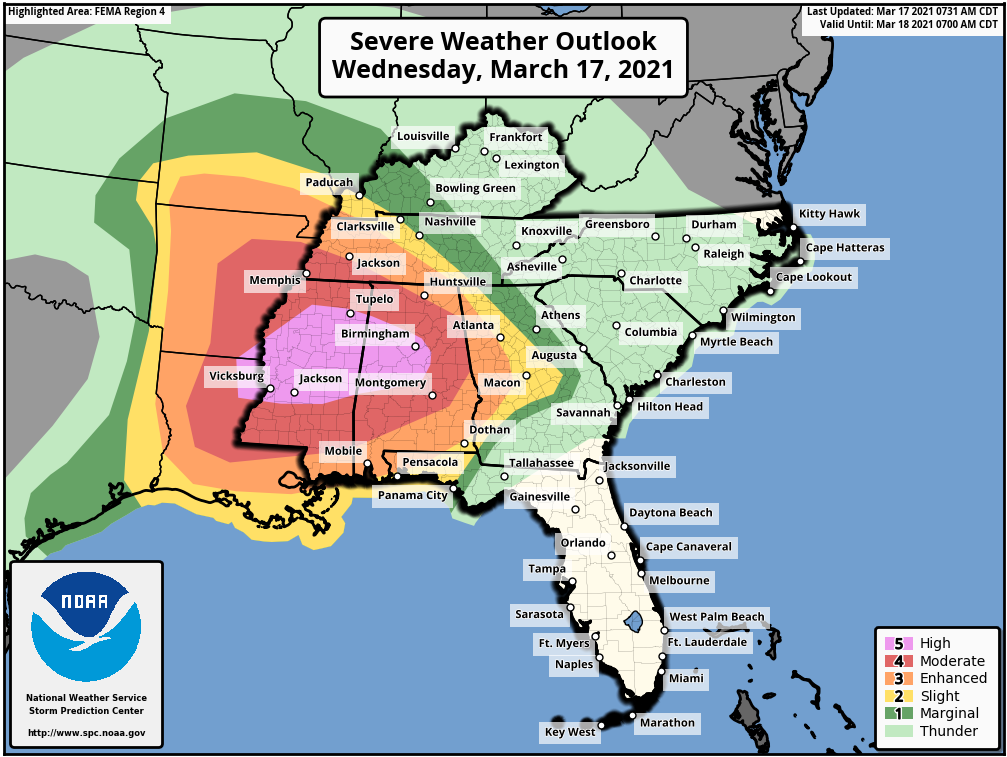 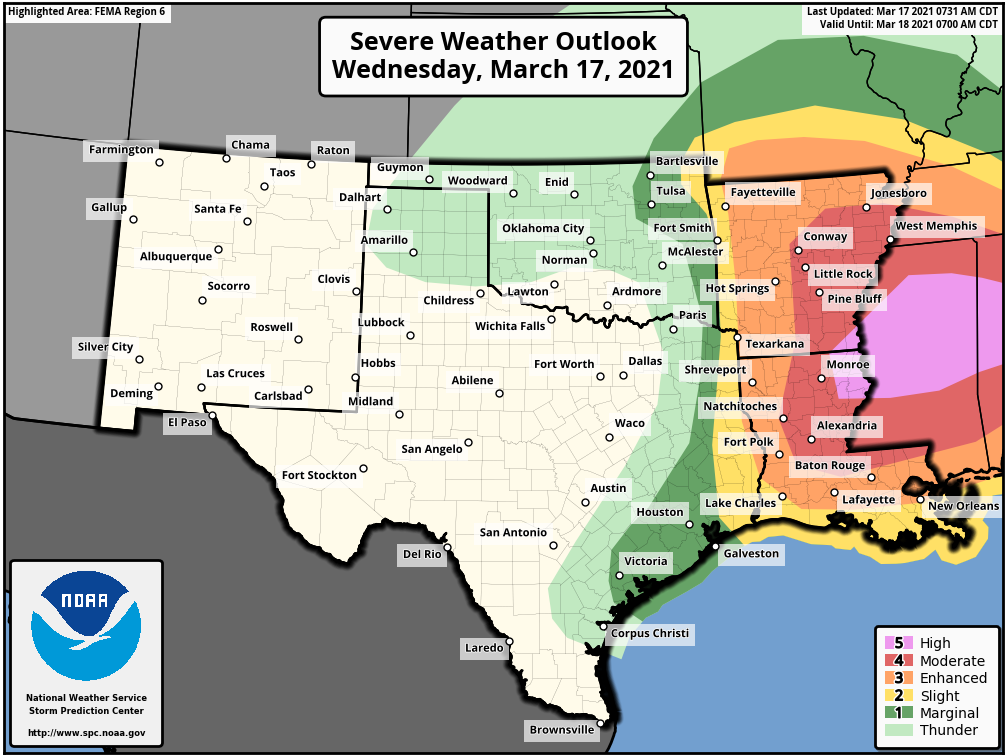 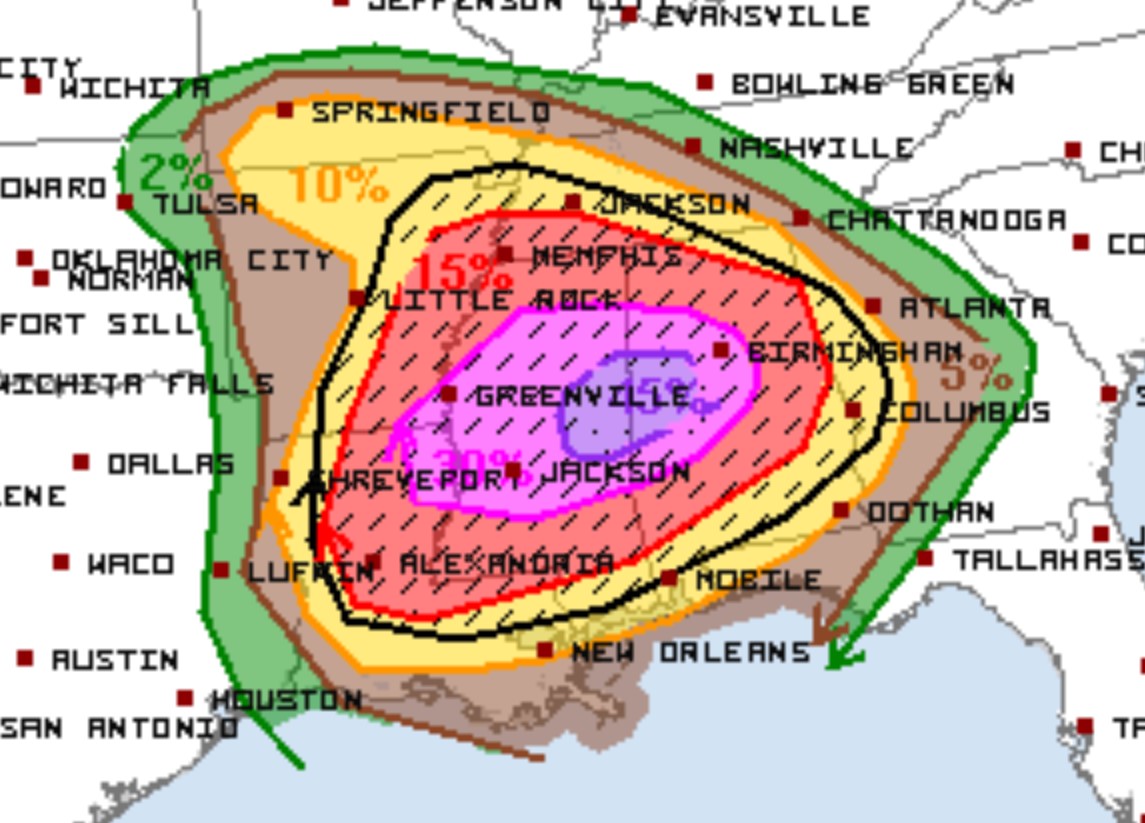 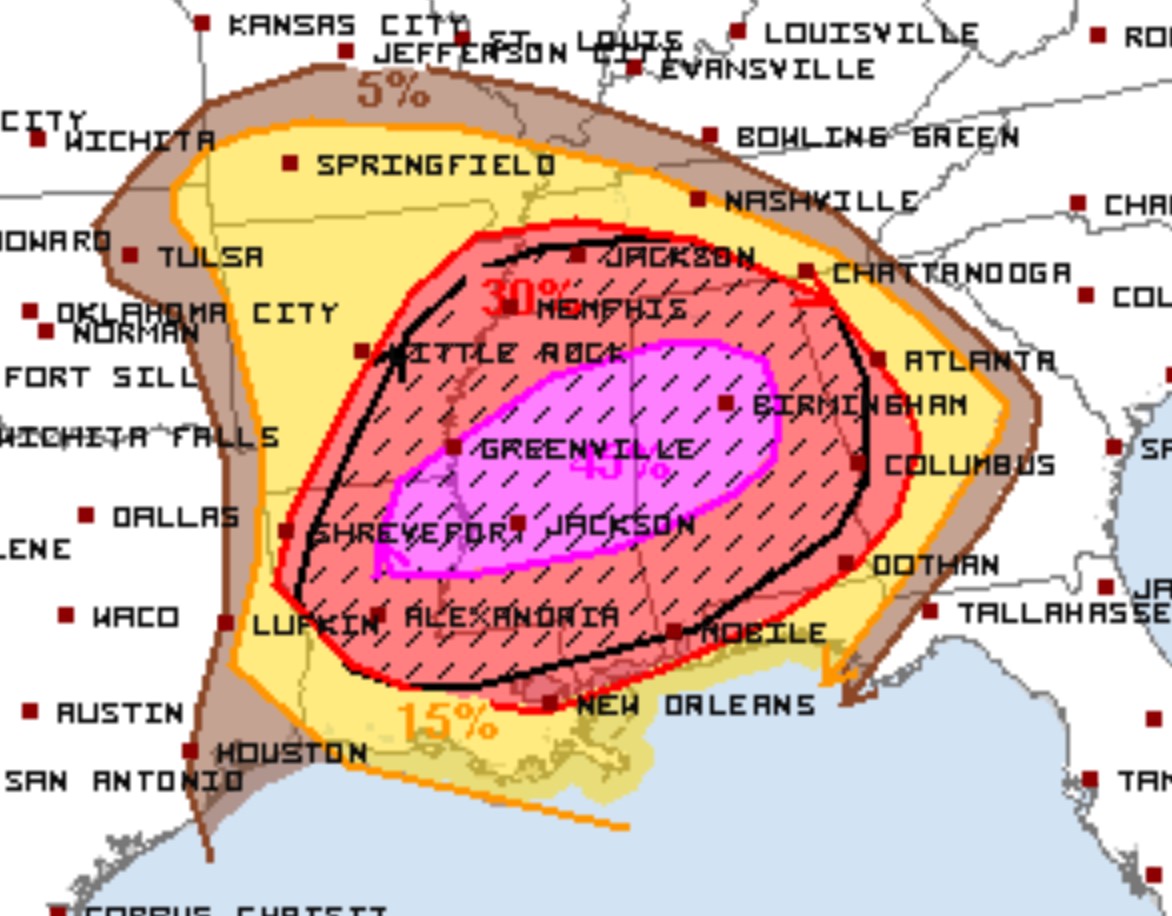 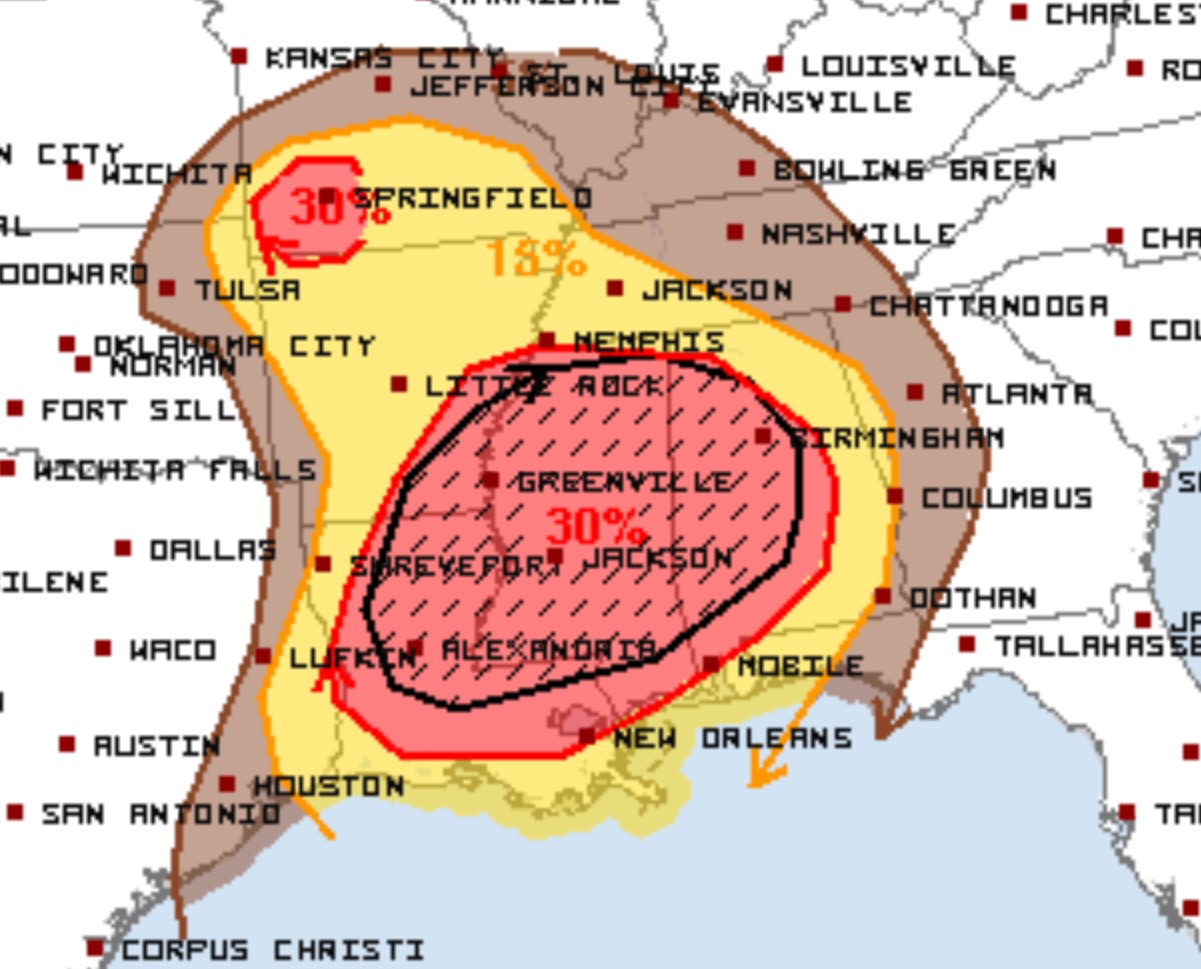 Widespread severe thunderstorms are likely through this afternoon into the overnight hours across the South, particularly from the lower Mississippi Valley eastward to western Georgia. Some areas like Mississippi and Alabama might see multiple rounds of severe storms

Supercell thunderstorms this afternoon and evening could produce long-track intense tornadoes, especially in the high-risk area shaded white in the map below from northeast Louisiana and southeast Arkansas into central and northern Mississippi and central Alabama.

However, the threat of dangerous severe storms capable of producing strong tornadoes, large hail and widespread damaging winds is expected in a broader area of the South.

This includes much of Arkansas, Louisiana, Mississippi, Alabama, southwest Tennesse and western and central Georgia.

Some of the cities that could see damaging storms are Little Rock, Arkansas; Monroe, Louisiana; Jackson, Mississippi; Memphis, Tennessee; and Birmingham, Alabama.

Localized flash flooding is also a potential threat in the South. 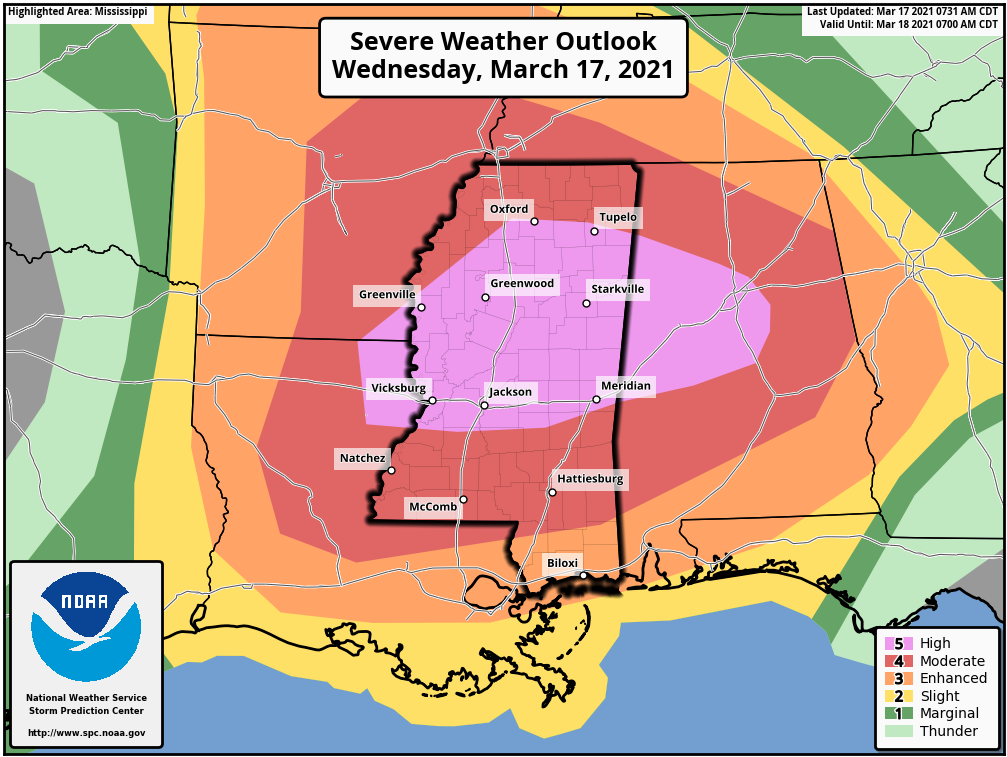 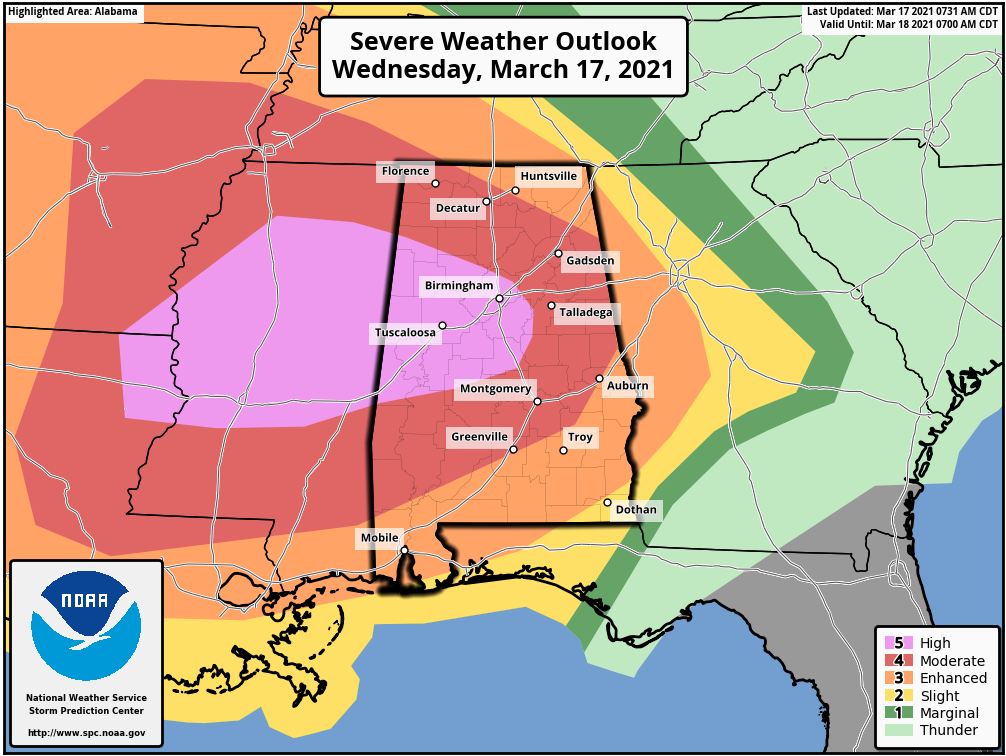 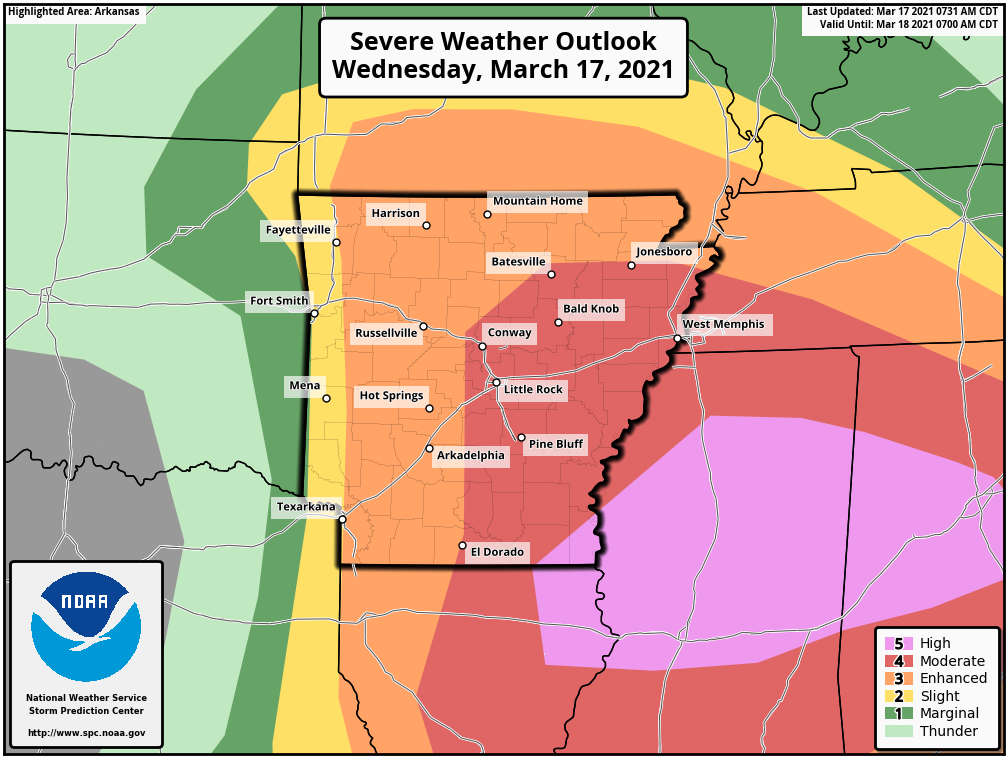 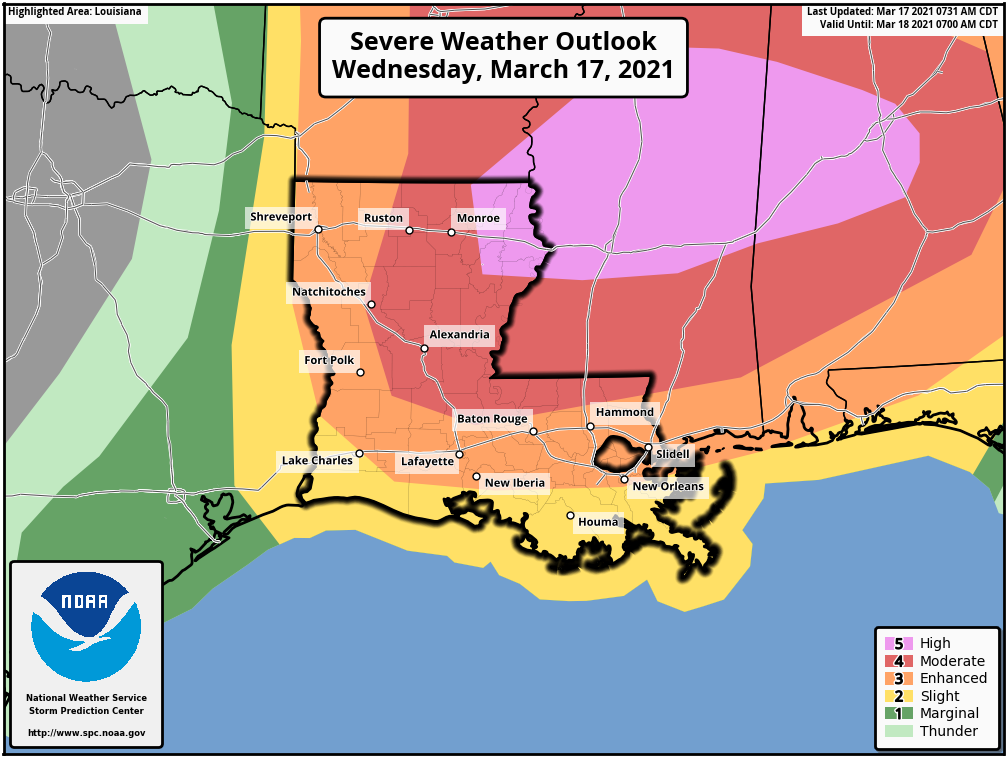 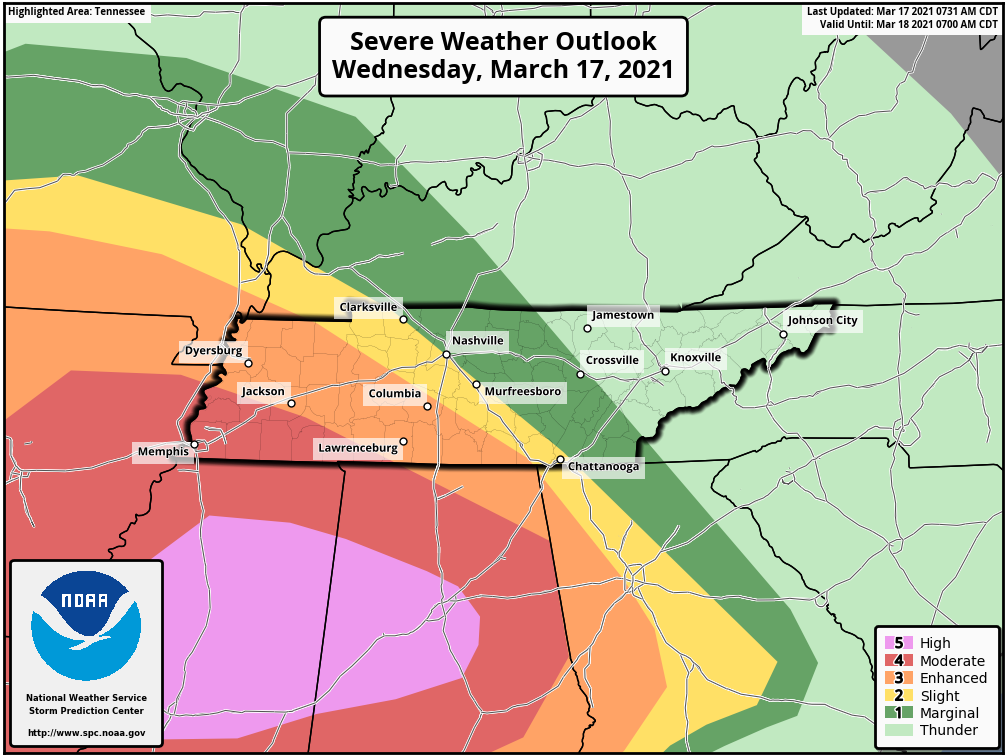 An upper low initially forecast over the Ozarks area is expected to shift steadily eastward through the period, reaching the Mid South by evening and then crossing the Appalachians and evolving into a more open wave overnight.

Meanwhile in the west, an eastern Pacific upper low/trough should approach the West Coast overnight. At the surface, a low initially progged over the southern Illinois area will cross the Ohio Valley through the day.

By evening, the low should reside in the central Appalachians area, and then is expected to elongate across the Mid Atlantic region overnight as weak offshore low development commences.

A cold front trailing from the low — bisecting the Mid South and extending south to the western Florida Panhandle — should clear the crest of the Appalachians during the early evening, before continuing eastward to move off the East Coast overnight.

Meanwhile, a remnant damming front will shift quickly northward as a warm front across the Atlantic Coast states, allowing a warm sector to spread northward into Virginia ahead of the advancing low. 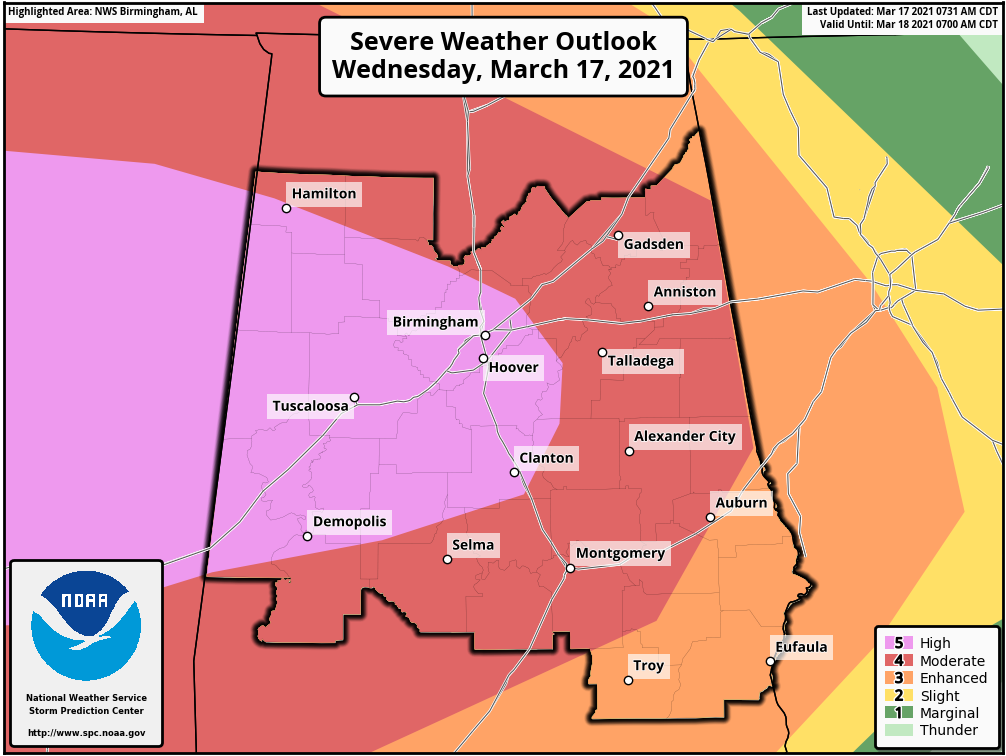 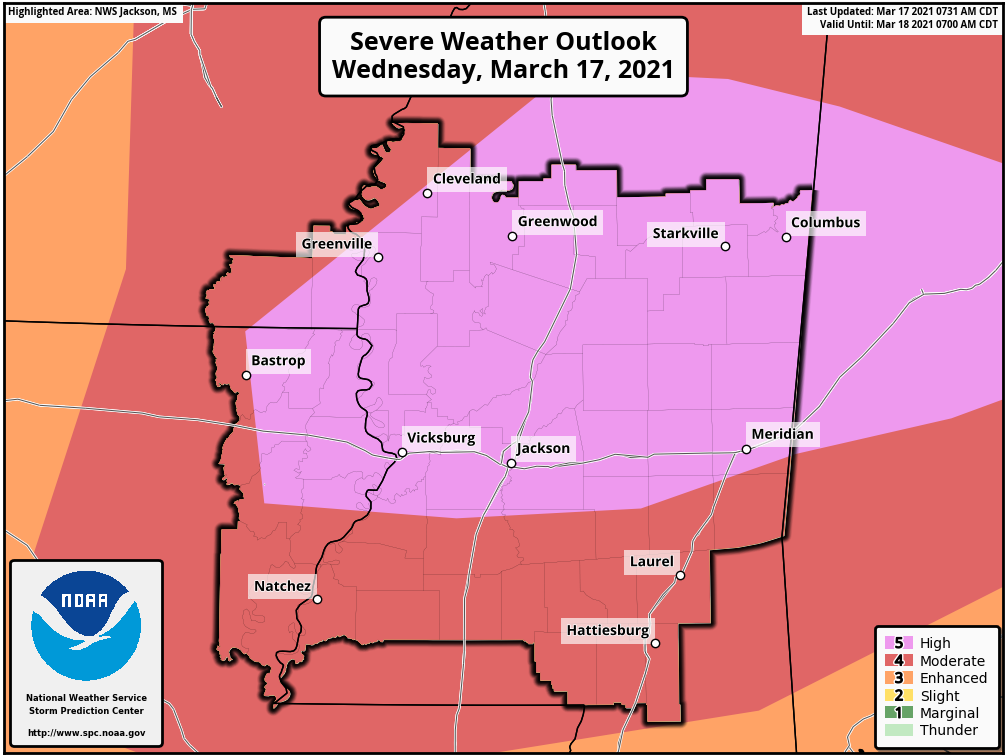 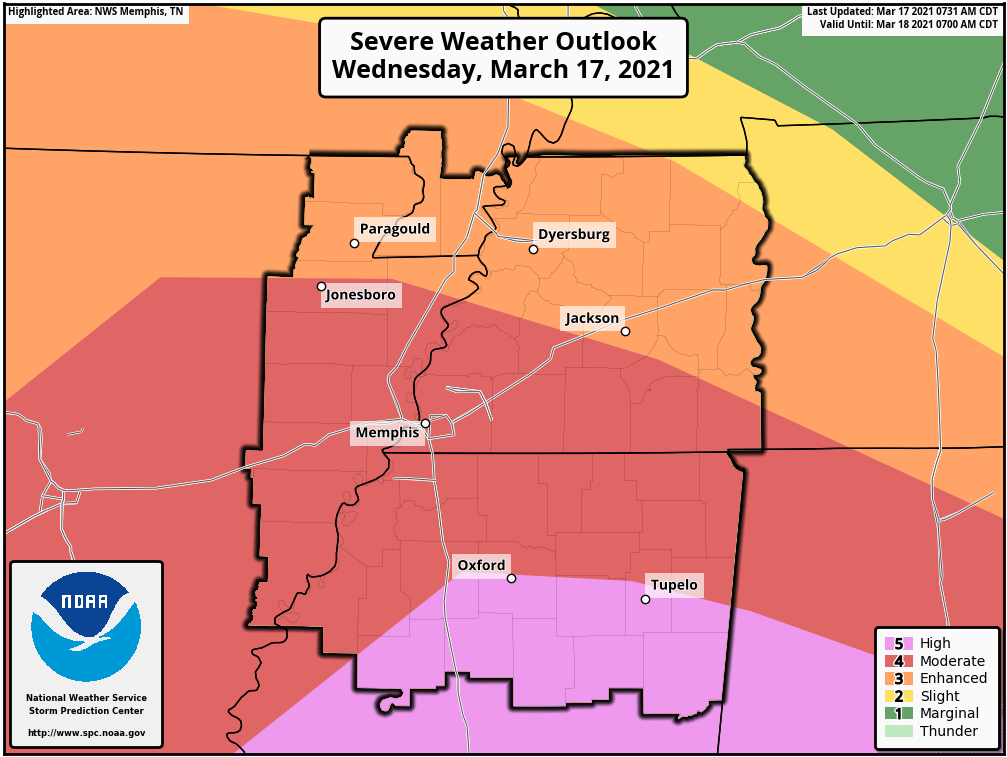 Showers and thunderstorms are forecast to be ongoing in an elongated zone of warm advection from Missouri east across the Ohio Valley states and into the Mid Atlantic region, and more significantly — from eastern Tennessee and possibly eastern Kentucky, southward across western Georgia, southeastern Alabama, and the Florida Panhandle.

Ongoing/all-hazards severe risk is expected to accompany the convection — primarily across the northern/western Georgia vicinity. With time, continued northward moistening/theta-e advection ahead of the approaching system will result in a broad warm sector east of the Appalachian crest, and secondarily — across parts of eastern Kentucky and southern Ohio into West Virginia/western Virginia.

Though heating may be tempered into the afternoon in many areas due to downstream cloud debris from ongoing convection, around 1000 J/kg mixed-layer CAPE should become widespread across the warm sector. The increasingly moist/unstable environment will support a continuation of the ongoing storms within a loose band ahead of the cold front, which will spread across Georgia and the Carolinas, and eventually southern Virginia, with some potential for isolated/cellular development ahead of this convective band.

Cells may also develop in the wake of an initial convective band northward into western North Carolina, while storms also develop into the afternoon west of the mountains into southern Ohio/western Kentucky/west Virginia.

The storms west of the mountains will likely become locally severe, with hail and damaging winds the primary risk, though a tornado or two would be possible. Farther south and east — into eastern Georgia and the Carolinas, and spreading north into parts of southern Virginia, very strong flow aloft, veering — and increasing substantially in magnitude with height through the lower troposphere — will result in shear quite favorable for supercells.

Along with hail potential, the more substantial risk will be from widespread damaging winds, as well as tornadoes — including possibility for a few strong/significant tornadoes during the afternoon and into the early evening.

Threat will gradually taper from west to east, as the system shifts eastward and the cold front eventually moves offshore.

Don’t Be Scared, Be Prepared!

A line of strong to severe storms will be ongoing early Thursday morning from around the Appalachians to portions of Georgia, eastern Alabama and the Florida Panhandle.

These storms might pose a risk of damaging wind gusts and some embedded tornadoes, including around the Atlanta area.

The risk of severe weather will spread as far east as the central and eastern Carolinas, eastern Georgia, southeastern Virginia and northeast Florida later in the day into the early evening. Widespread damaging winds, large hail and several tornadoes are possible.

Some of the cities that could see damaging storms are Columbia and Charleston, South Carolina; Raleigh and Charlotte, North Carolina; Norfolk, Virginia; and Savannah, Georgia. 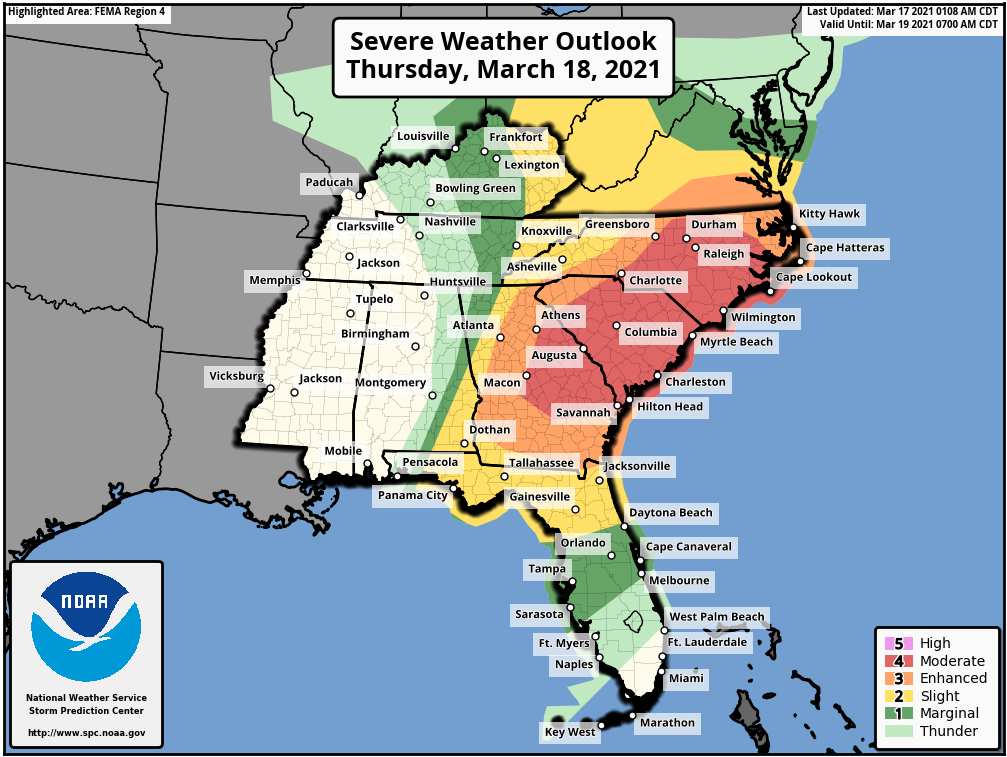 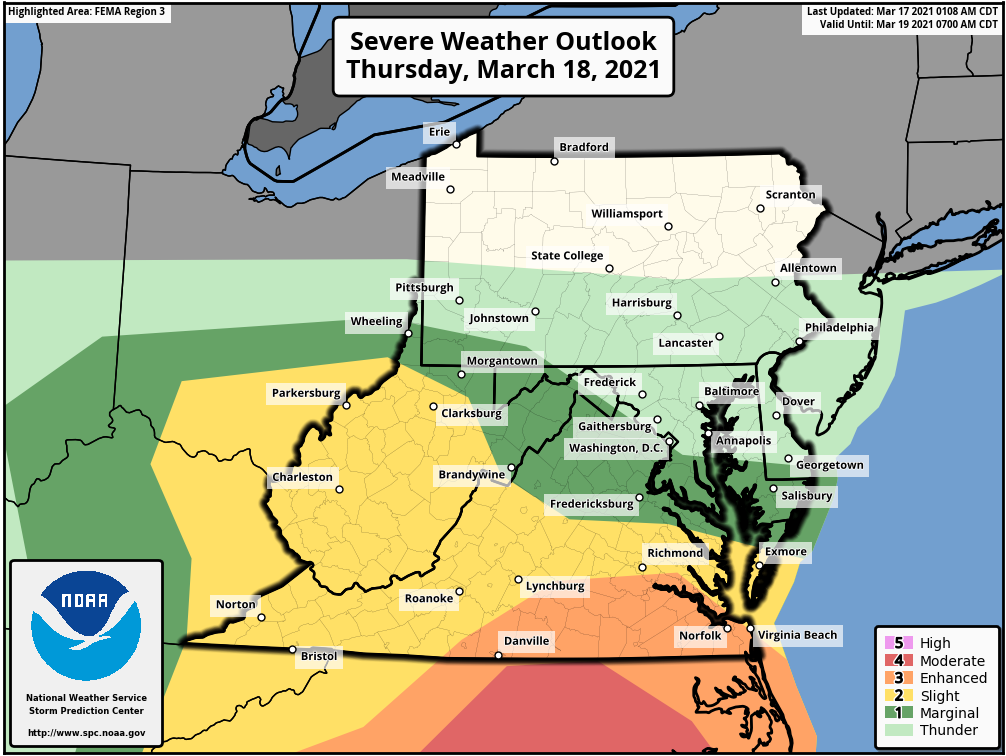 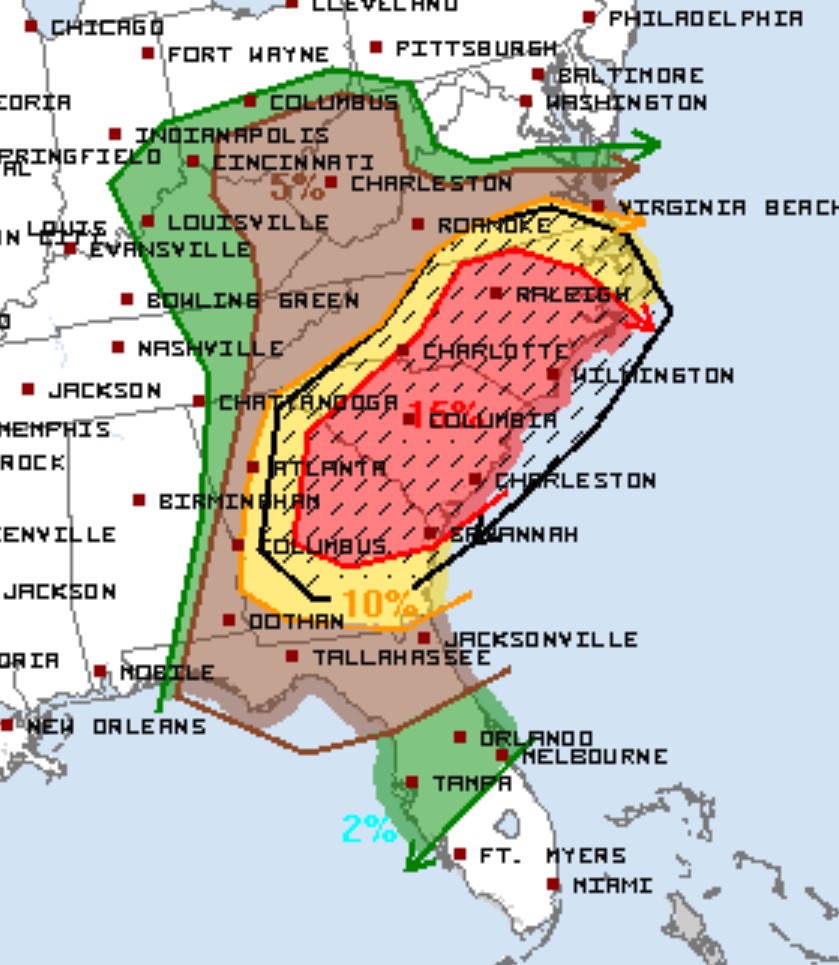 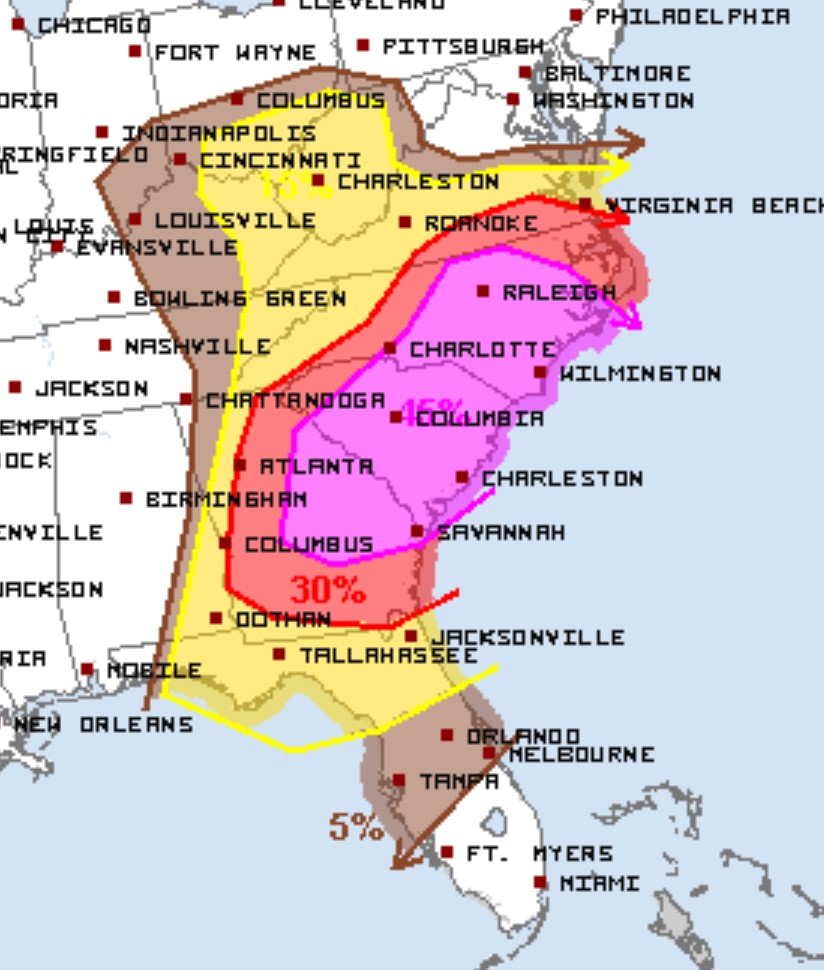 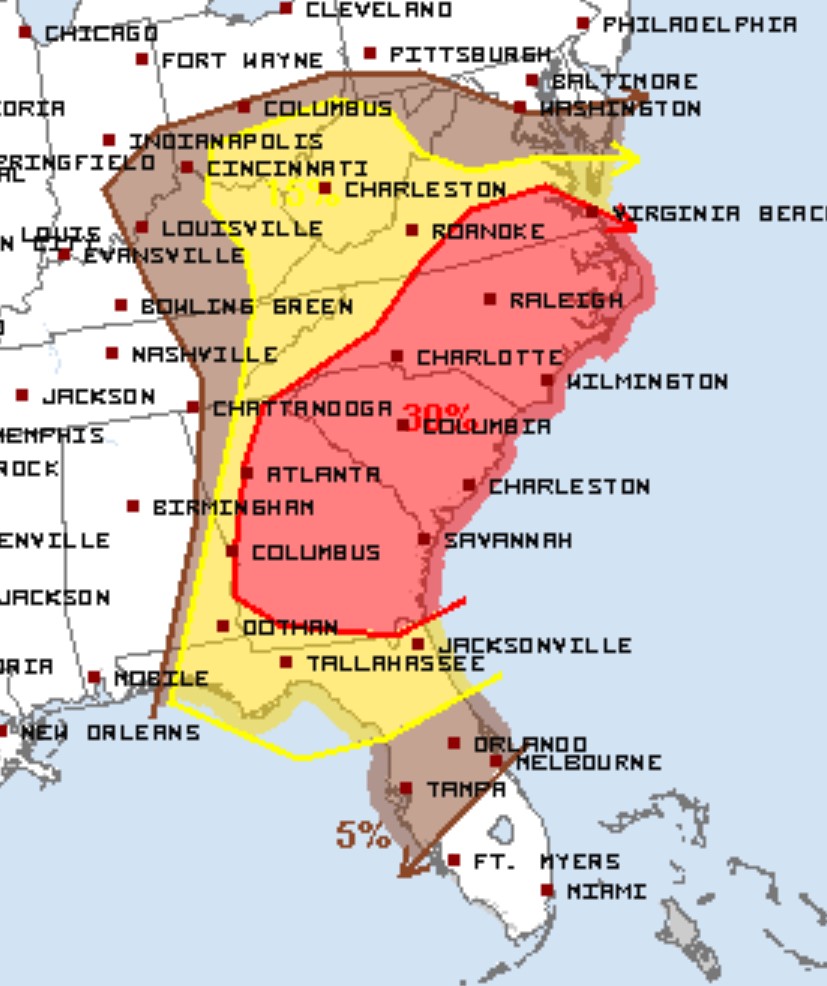