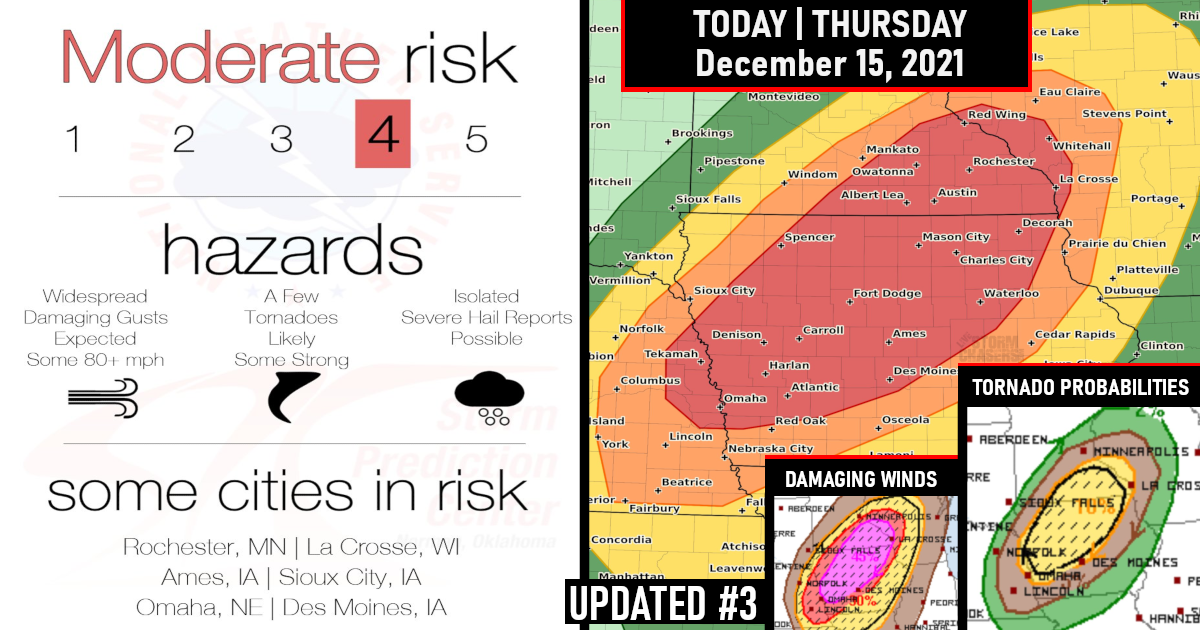 A rapidly evolving outbreak of severe storms with widespread damaging winds and a few tornadoes is expected to begin by mid-afternoon across eastern NE and continue northeastward into the upper MS Valley by early tonight!

Widespread severe wind gusts of 60-75 mph along with at least a few tornadoes are likely from mid-afternoon through early tonight across the Mid-Missouri Valley to the Upper Mississippi Valley.

Embedded gusts of 75-100 mph and a strong tornado or two are also possible, particularly from extreme eastern Nebraska across western to northern Iowa and southeastern Minnesota. 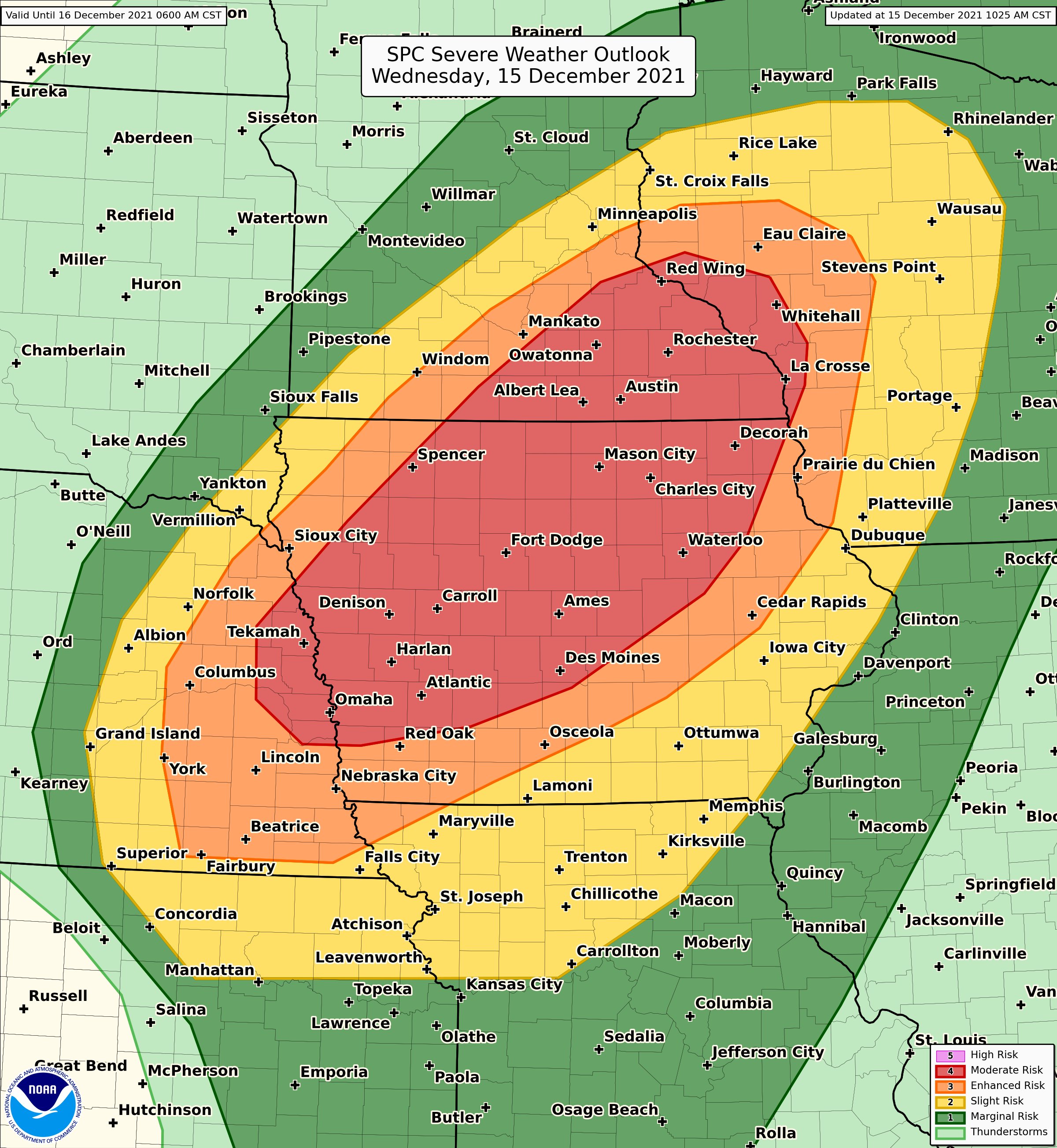 1) First Moderate Risk area in the IA/MN/WI region during the month of December in SPC (Storm Prediction Center) History!

Widespread wind damage with peak gusts potentially in the 75-100 mph range, and embedded circulations will be capable of producing a few fast-moving tornadoes (one or two of which could be strong) with both right-moving supercells and embedded QLCS mesovortices. 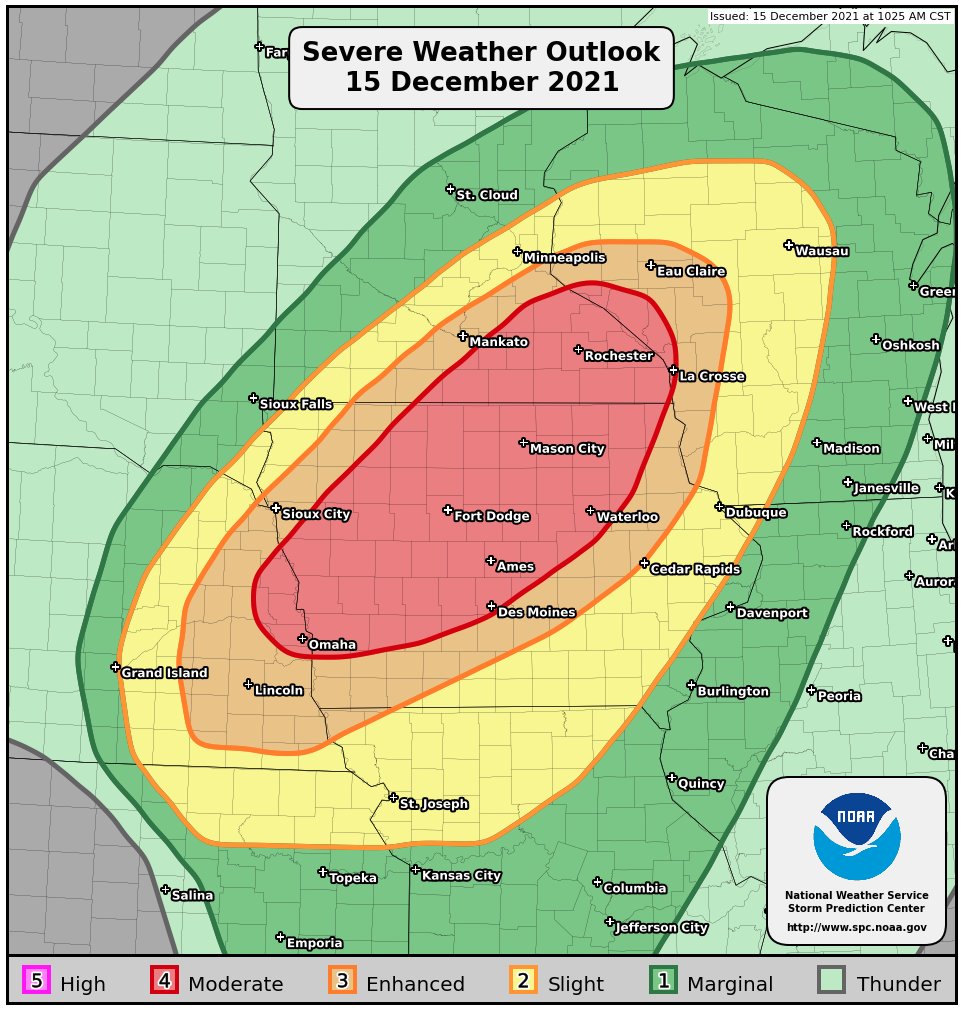 Extreme fire danger is also likely today as strong wind gusts and very dry conditions will develop across the central and southern Plains. Widespread wind gusts of 60+ mph may support fast-moving wildfires within areas of very dry fuels. An Extremely Critical Fire Weather area has been issued and is also the first ever recorded across the Great Plains in December. Avoid using tools that spark and release heat or smoking around flammable materials. 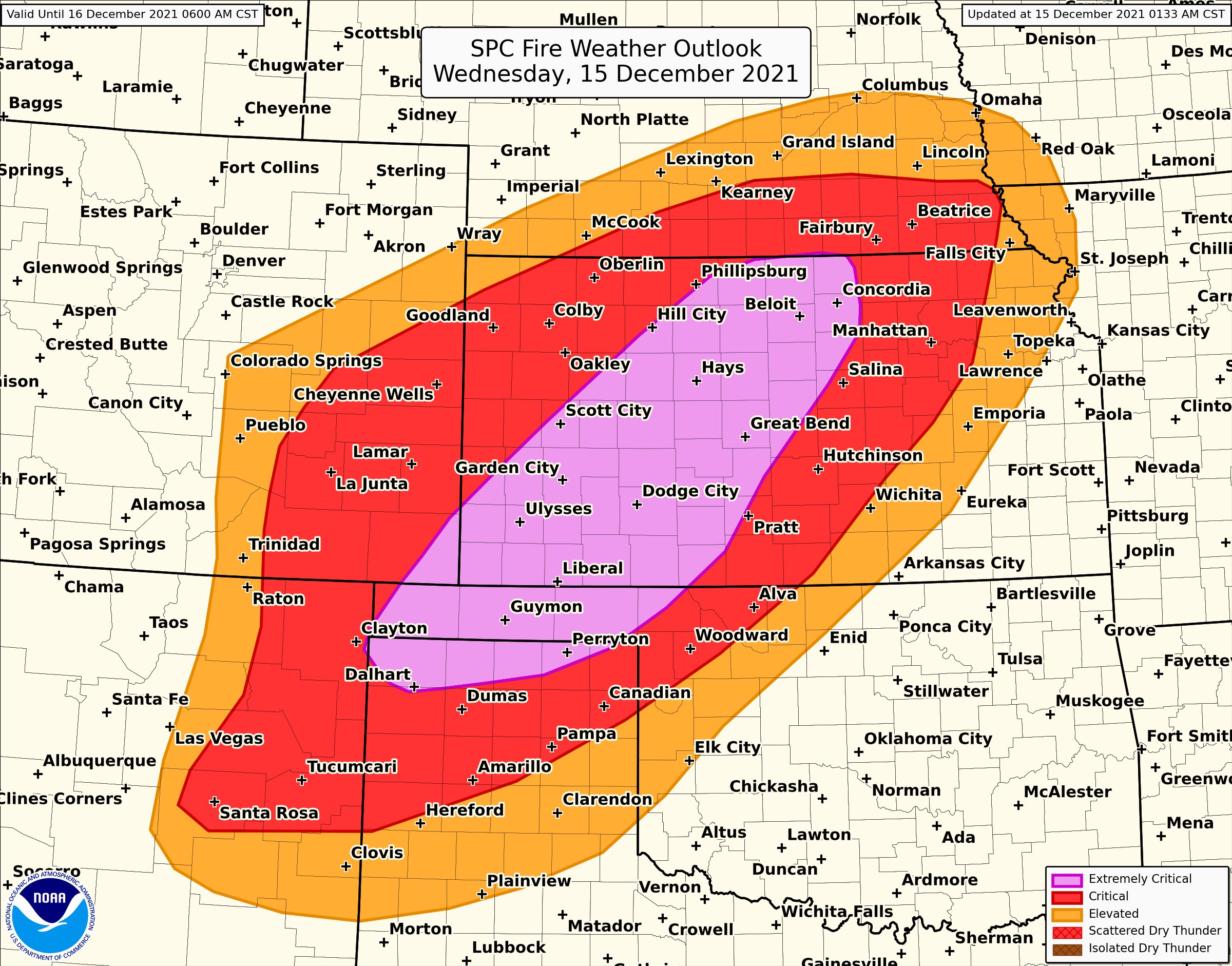 Widespread severe wind gusts of 60-75 mph along with at least a few tornadoes are likely – Embedded gusts of 80-100 mph and a nocturnal strong tornado or two are also possible, particularly across western to northern Iowa and southeast Minnesota.

Severe thunderstorms capable of widespread, intense wind gusts (some greater than 75 mph) and a few tornadoes are possible across Iowa, southeast Minnesota, and west-central Wisconsin.

The most likely time frame for this to occur is from late afternoon through this evening. However, Storms here could be moving EXTREMELY fast, up to 80 mph at times 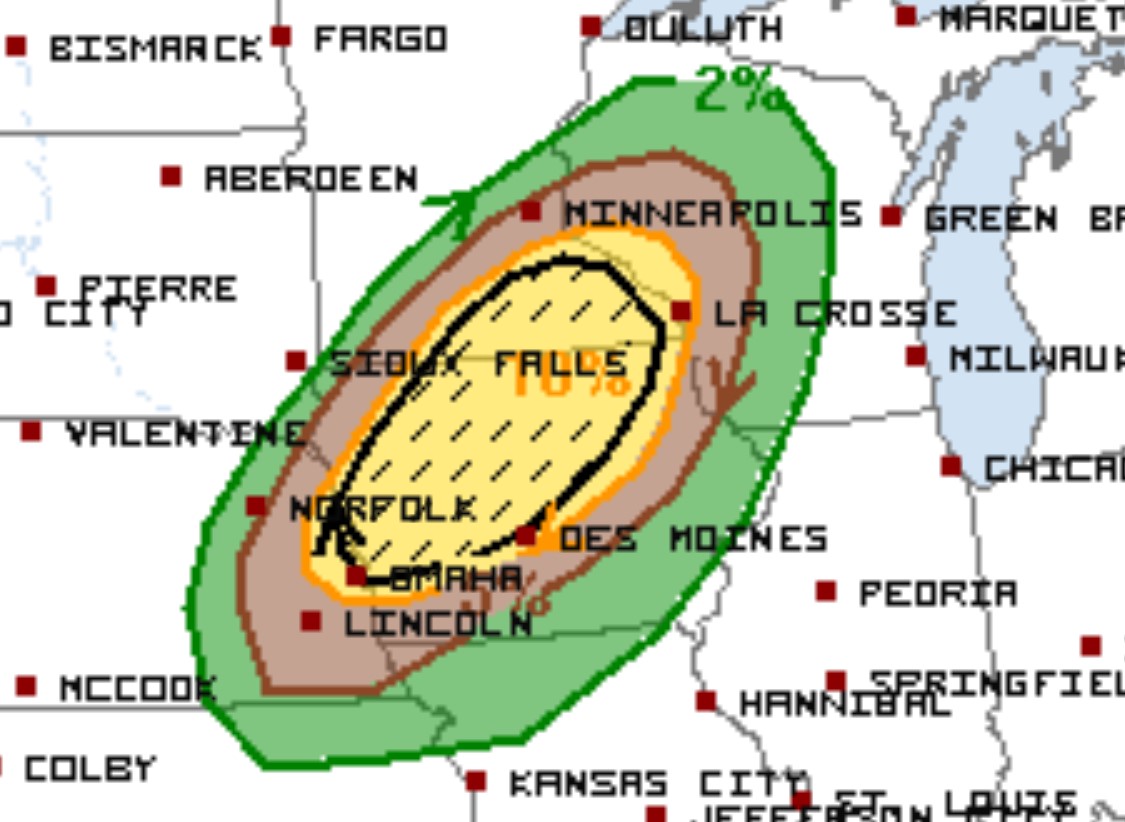 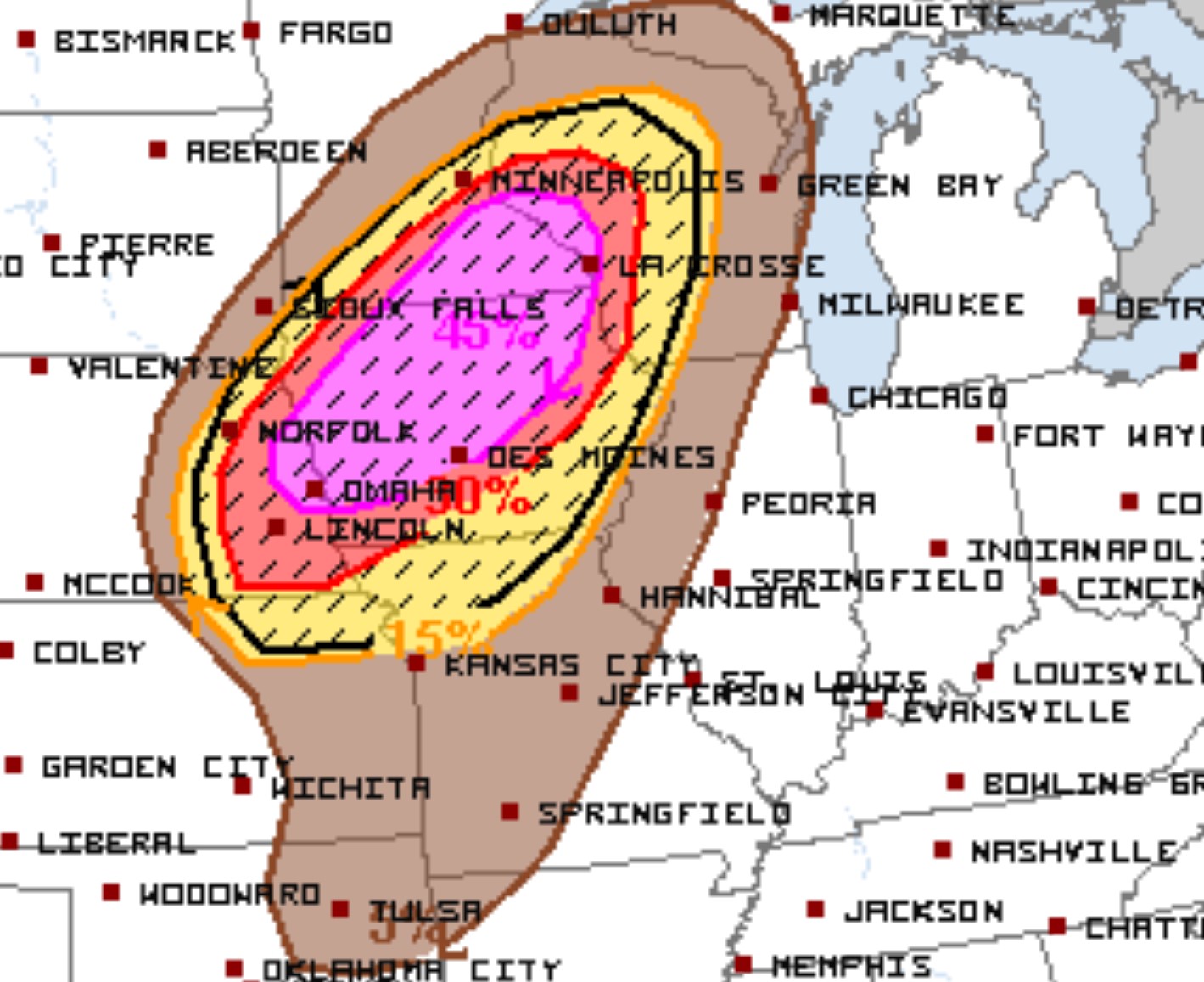 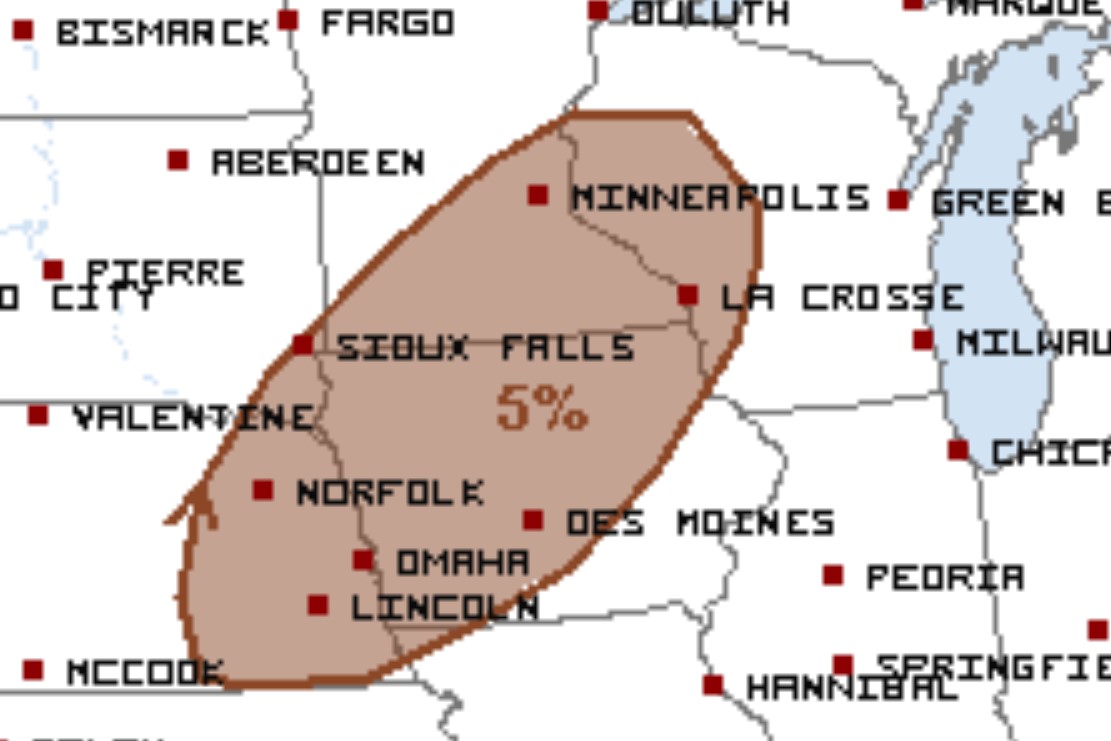 The last time anywhere in Minnesota saw a Slight Risk of severe weather during the month of December was 12/5/2001. Unusual December weather to say the least.

Per the state climatologist office, they have not seen December tornadoes, at least in the period from 1950-2020.

An unprecedented outbreak of severe thunderstorms for this time of year is likely early this evening.

The line of thunderstorms will race northeast across southern and eastern Minnesota into Wisconsin between 5 PM and 9 PM. Widespread wind damage from gusts possibly exceeding 80 mph will accompany the storms. Tornadoes are also possible.

The highest risk of severe thunderstorms is southeast of a line from Redwood Falls to Rush City. Storms will be moving between 60 and 70 mph! Conditions will deteriorate very quickly.

Unless preparations are made ahead of time, it may be hard to take adequate shelter when one notices storms beginning to approach.

These are expected to be high-end damaging wind producers, so pay close attention to warnings issued later today.

Very strong winds will develop behind a cold front tonight. Wind gusts of 60 to 65 mph are expected area-wide.

A High Wind Warning is in effect. Plummeting temperatures overnight could result in a flash freeze.

Some accumulating snow is also possible across western Minnesota.

Oh did we mention, there is snow on the ground where tornadoes could be today? 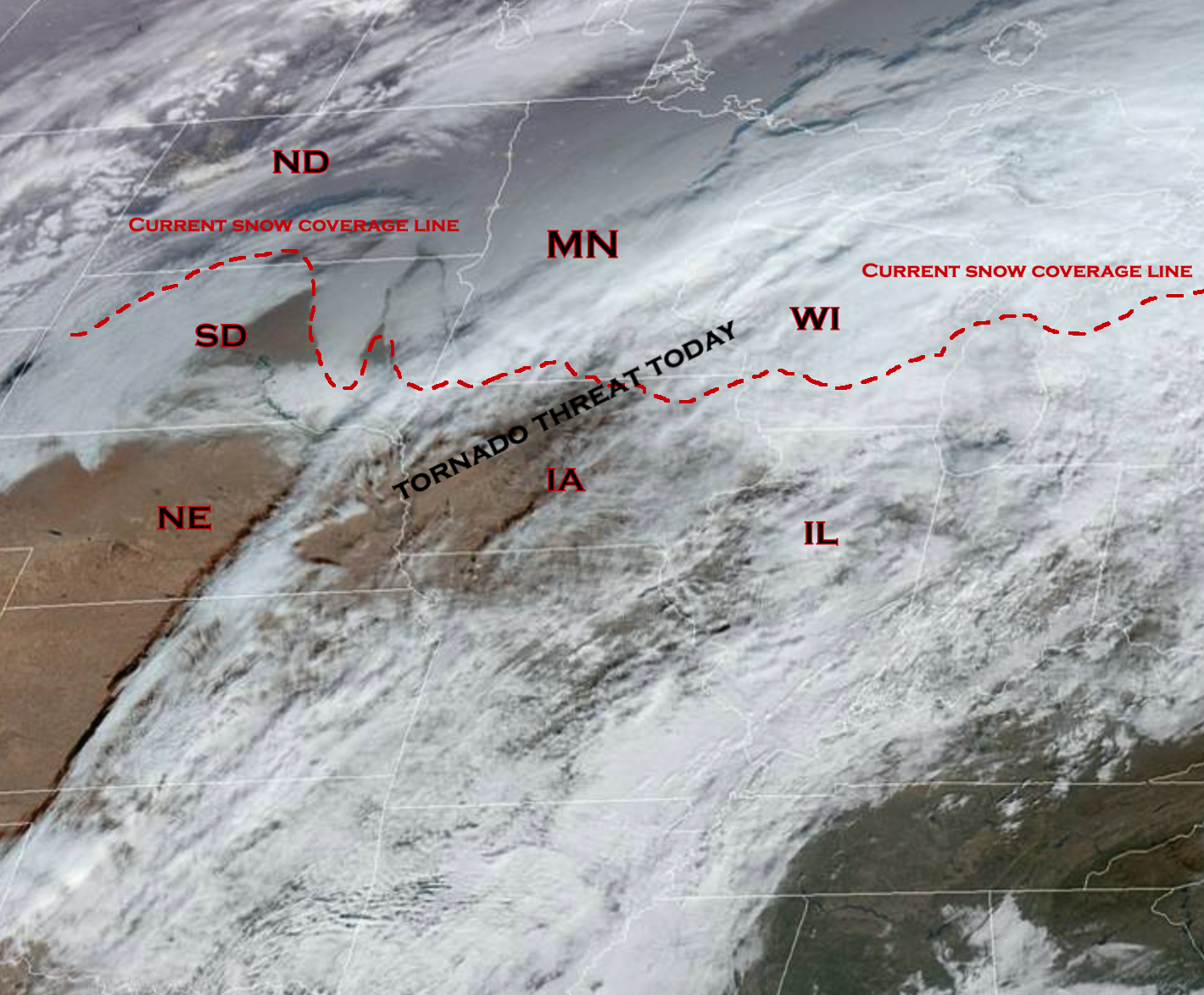 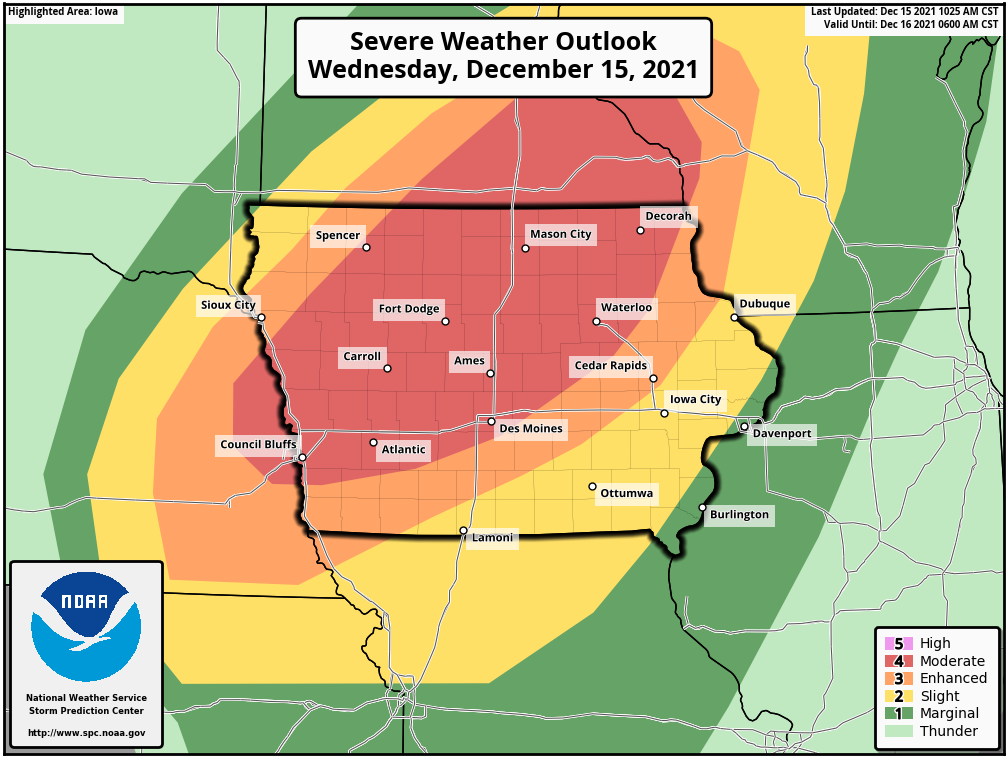 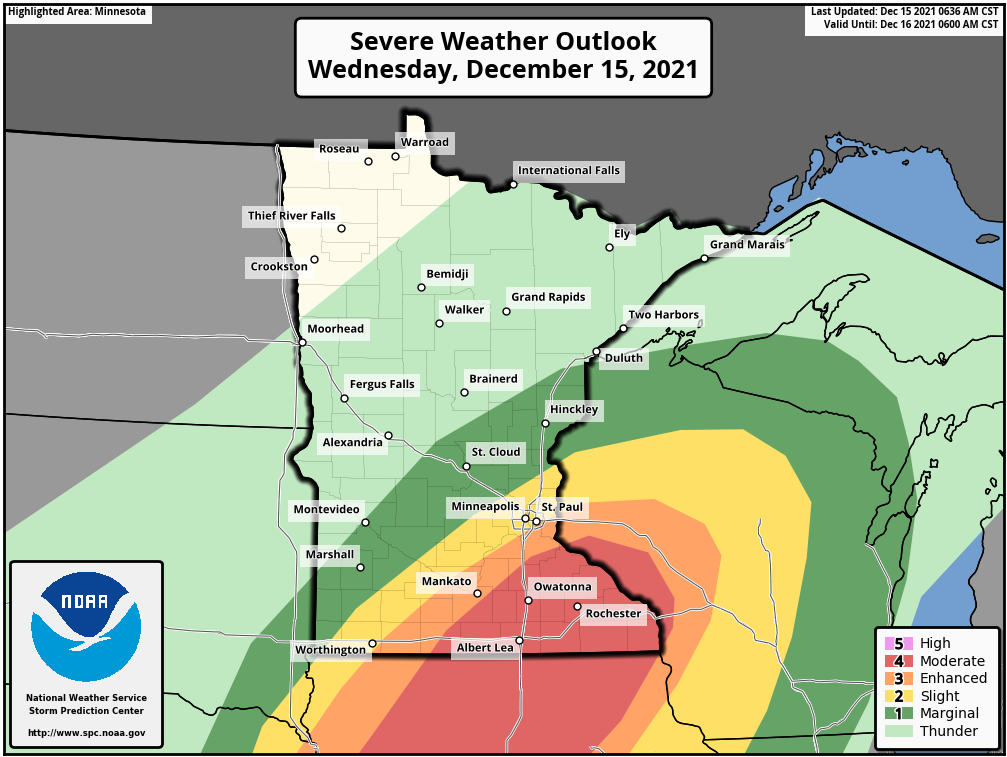 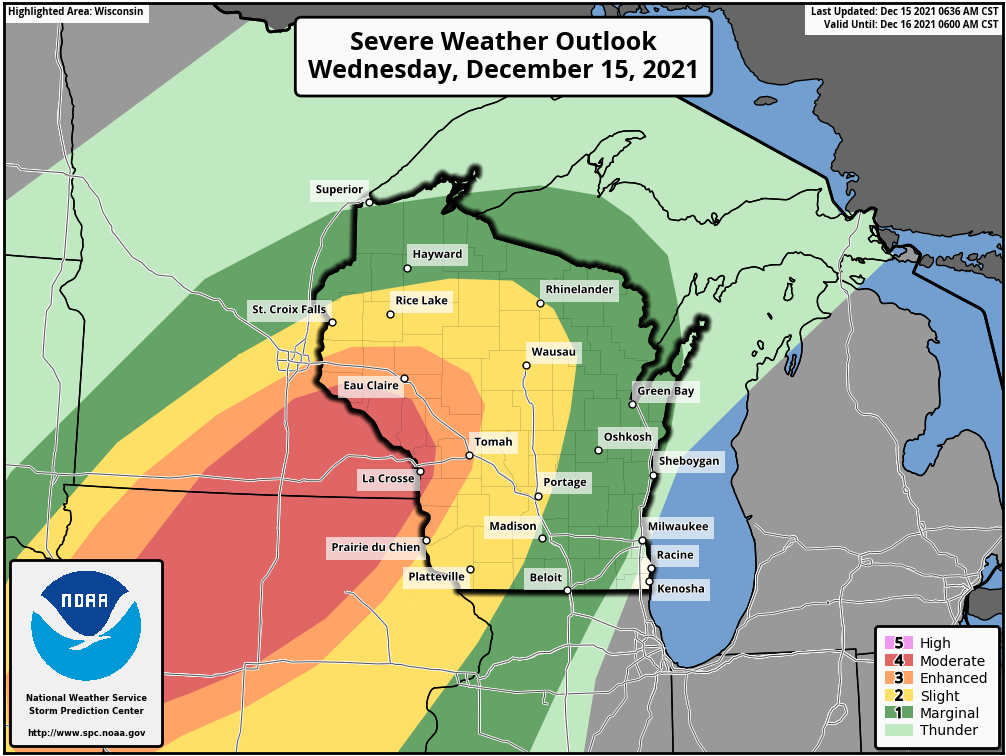 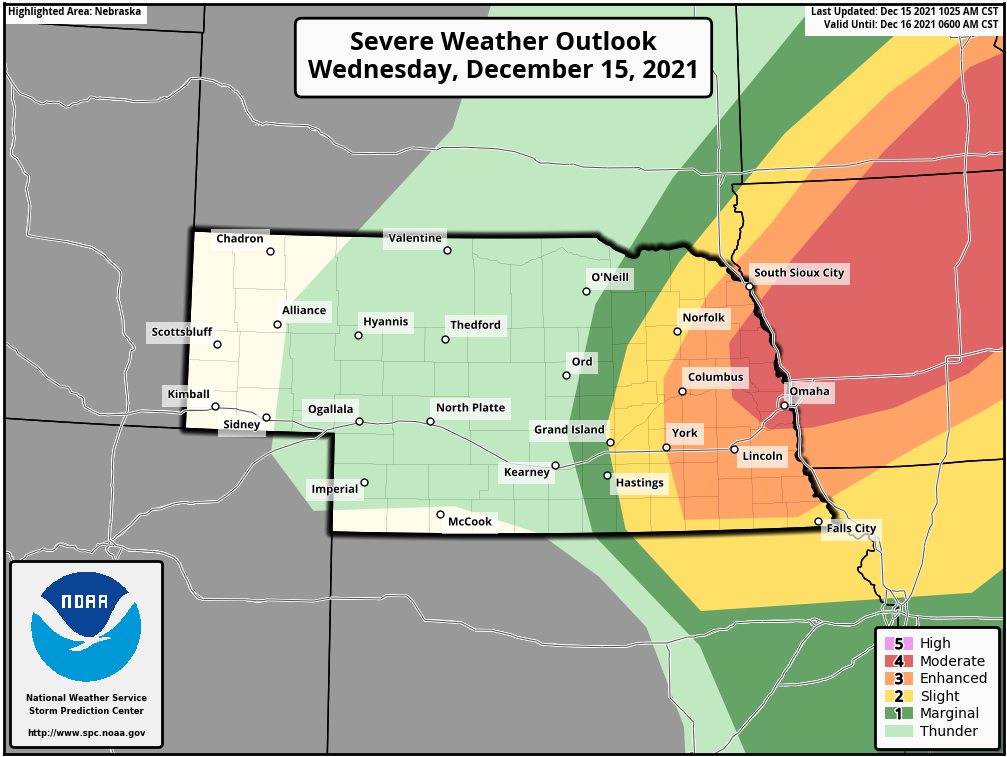