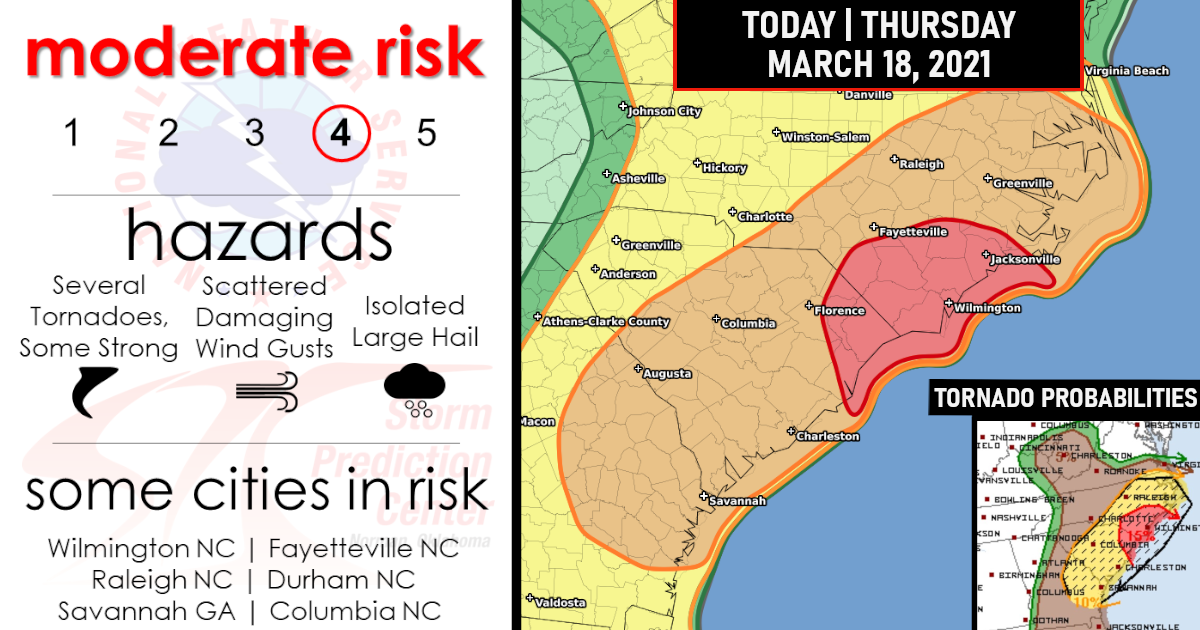 Moderate Risk Issued | All severe hazards are possible!
Scattered severe thunderstorms are expected today from portions of eastern Georgia, through the Carolinas, and into extreme southeast Virginia.

Other isolated severe storms are possible from southern Ohio into the central Appalachians! 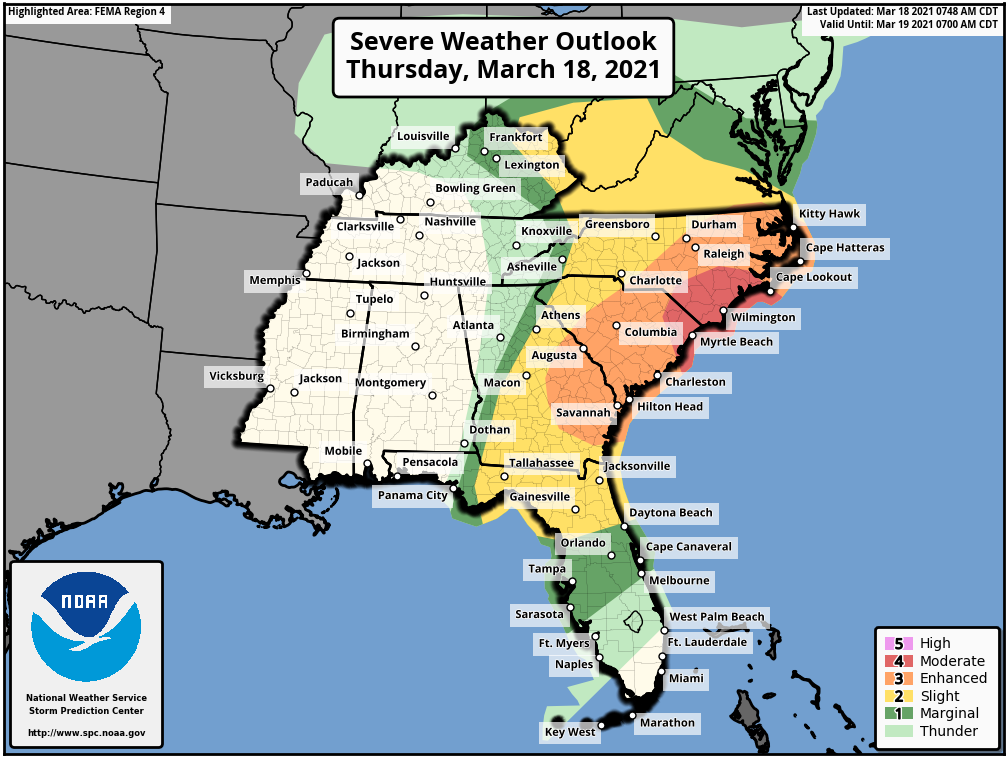 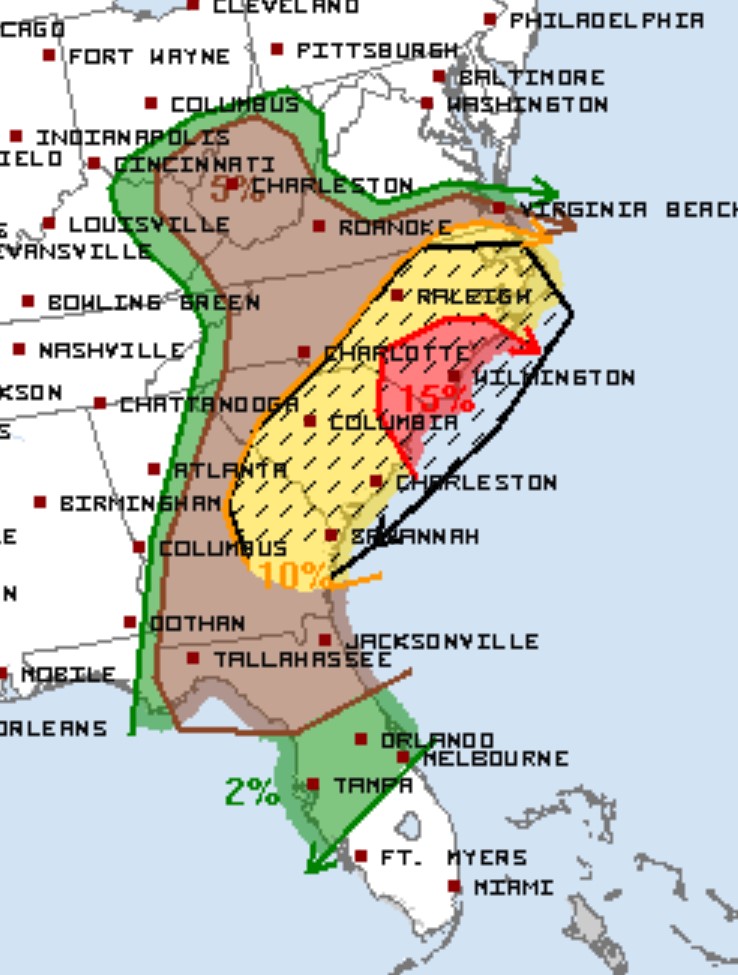 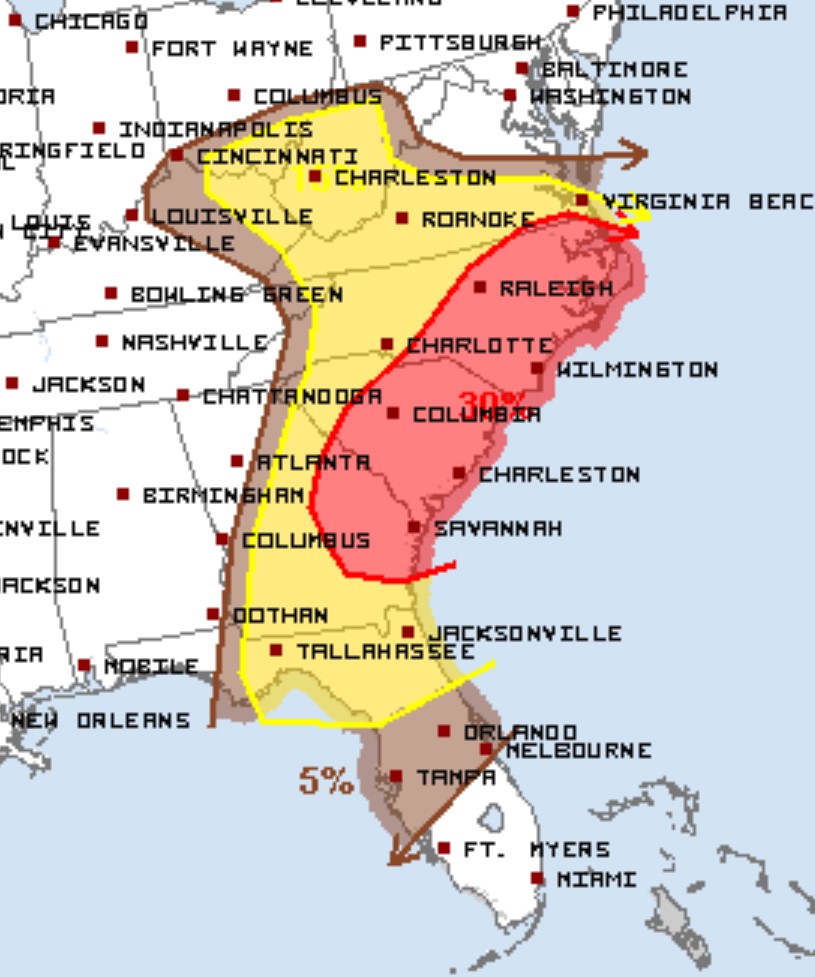 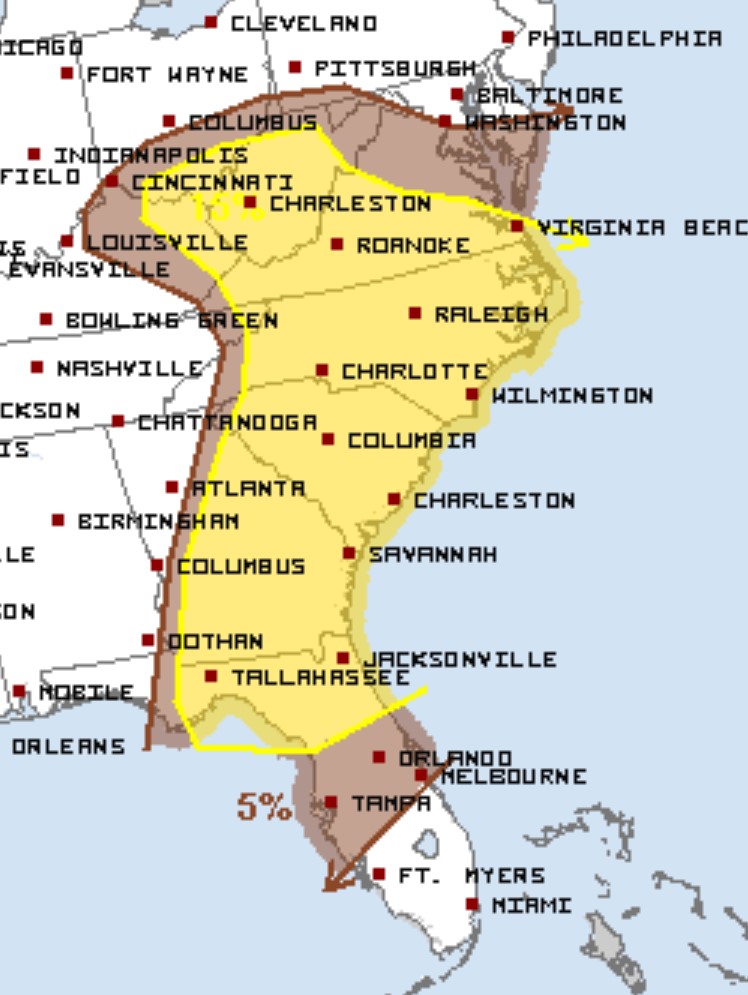 The atmosphere should become unstable enough to support another round of strong to severe thunderstorms in the Southeast this afternoon into the early evening.

Areas from eastern Georgia into the central and eastern Carolinas have the greatest chance of seeing severe thunderstorms later today.

Damaging winds, large hail, and some tornadoes are possible. 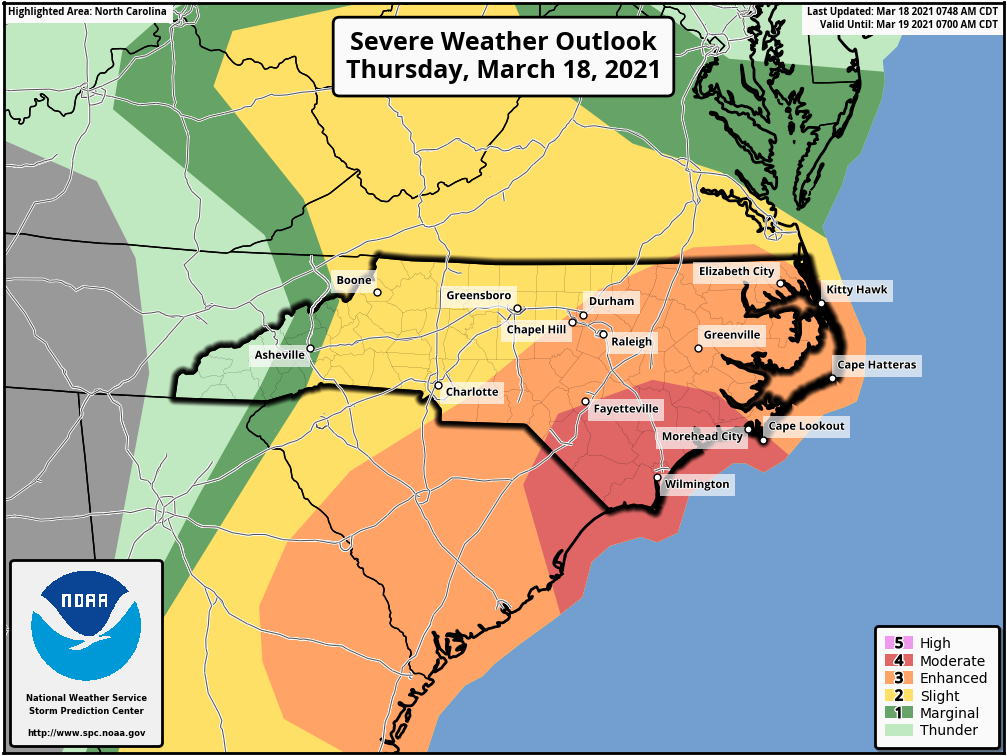 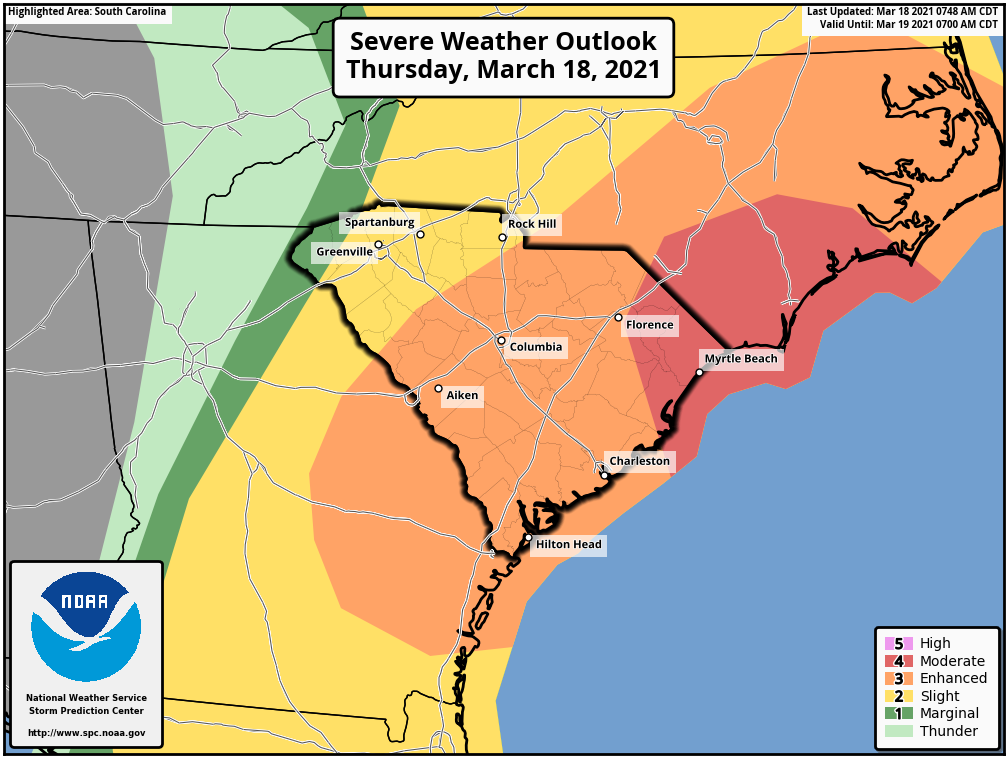 Some of the cities that could see strong storms are Columbia and Charleston, South Carolina; Raleigh, North Carolina; and Savannah, Georgia.

Scattered severe storms are also possible as far north as the upper Ohio Valley, West Virginia and southern Virginia, and as far south as northern Florida. Damaging winds, hail and a few tornadoes are potential threats in these areas.

Closer Look at the Moderate Risk! 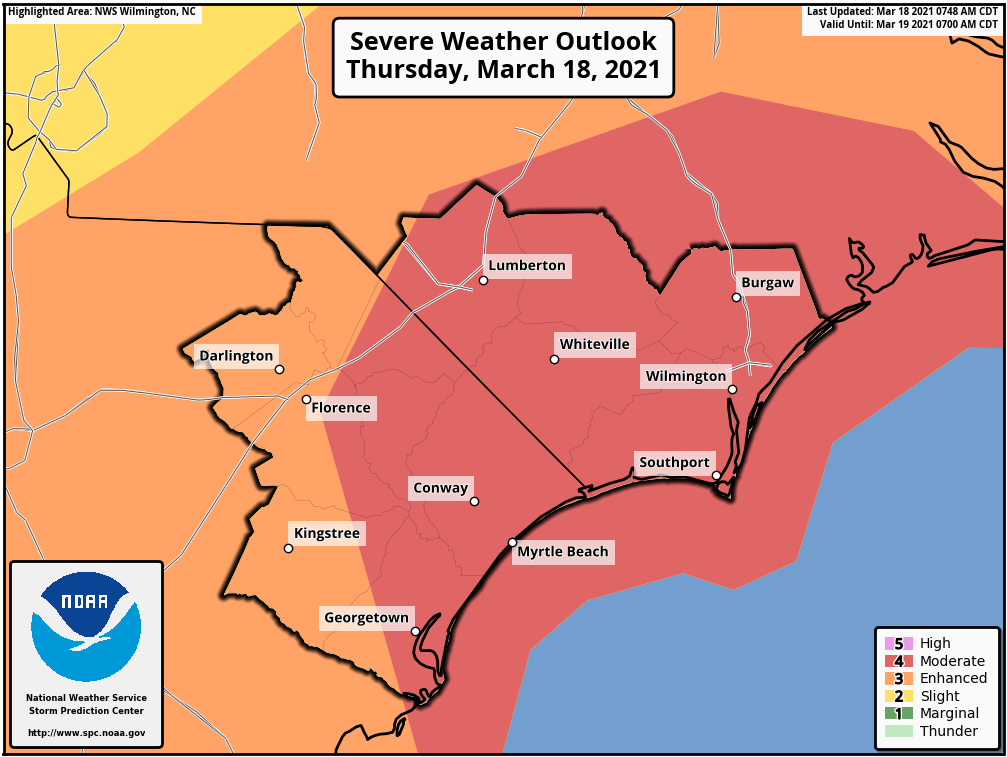 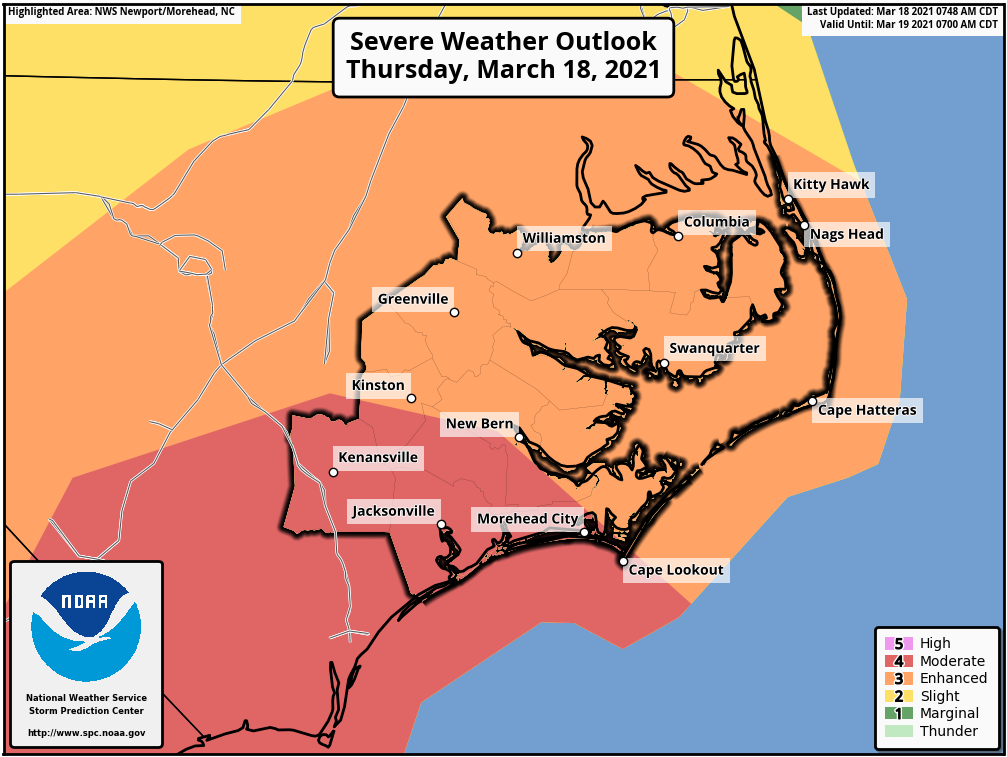 Southeast Atlantic states through this evening…

In advance of a pronounced midlevel trough over the lower MS Valley, a surface cyclone will occlude across the OH Valley, and a surface cold front will move eastward from AL to GA this afternoon and across the Carolinas tonight.

In advance of the front, a pre-frontal band of convection persists this morning from southwest GA into the FL Panhandle. Recent surface observations have revealed a mesolow with the convective cluster moving into southwest GA, and this may help maintain somewhat stronger vertical shear in the short term across southwest GA.

Otherwise, the pre-frontal storms are likely to develop east-northeastward through the morning across southern/eastern GA and extreme north FL, and then into the eastern Carolinas later this afternoon/evening.

As a coastal front moves northward today, low-level moisture will spread inland just in advance of the storms, and combine with some daytime heating to support MLCAPE of 500-1000 J/kg.

Midlevel lapse rates are expected to remain rather modest, which will temper buoyancy, though CAPE will still be large enough given 0-1 km SRH of 100-200 m2/s2 just ahead of the convection.

A few tornadoes, and perhaps an isolated strong tornado, along with damaging winds, will be the main threats.

Farther inland across the Piedmont, there may be sufficient destabilization in a narrow corridor to support a couple of storm clusters/supercells this afternoon.

The stronger storms could evolve later this morning/afternoon from the ongoing convection across north GA.

Where sufficient buoyancy overlaps the more favorable/curved hodographs east of the mountains, a couple of tornadoes, damaging gusts and isolated large hail will all be possible this afternoon/evening.

Near the weakening, occluded low, there could be pockets of surface heating this afternoon, on the nose of the midlevel dry slot.

With some surface heating and cool midlevel temperatures, buoyancy should become sufficient for a few strong-severe storms this afternoon.

This area will be on the northwest edge of the stronger flow/shear, where a mix of multicell clusters and low-end supercells will be possible.

Don’t Be Scared, Be Prepared!