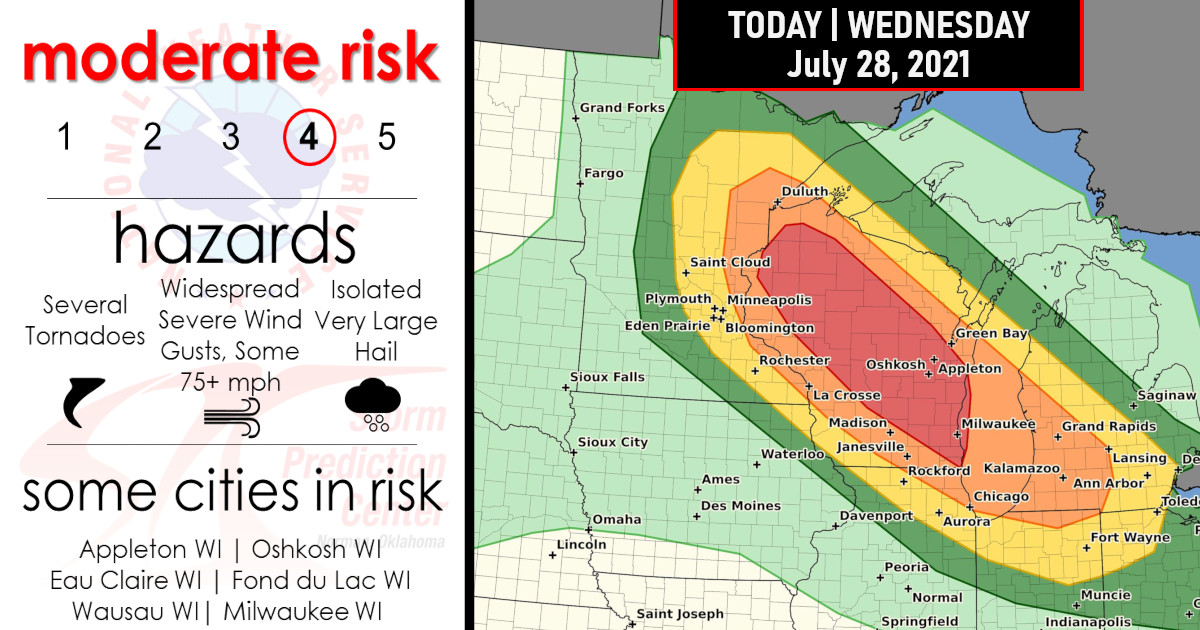 SPC has issued a MODERATE RISK (4/5) for the growing confidence of a dangerous DERECHO!

This afternoon and evening, a corridor from northeastern Minnesota across Wisconsin to the southern Lake Michigan region is under the threat of very large hail, severe wind (locally exceeding hurricane force) and a few tornadoes.

Storms will start as supercells with a tornado and very large hail threat across Eastern Minnesota then quickly grow upscale into a dangerous squall line capable of producing 70-80MPH+ straight-line winds with embedded tornadoes.

IMPORTANT NOTE: Those at this year’s EAA – The Spirit of Aviation AirVenture in Oshkosh, Wisconsin need to be on alert of the impending weather later today! 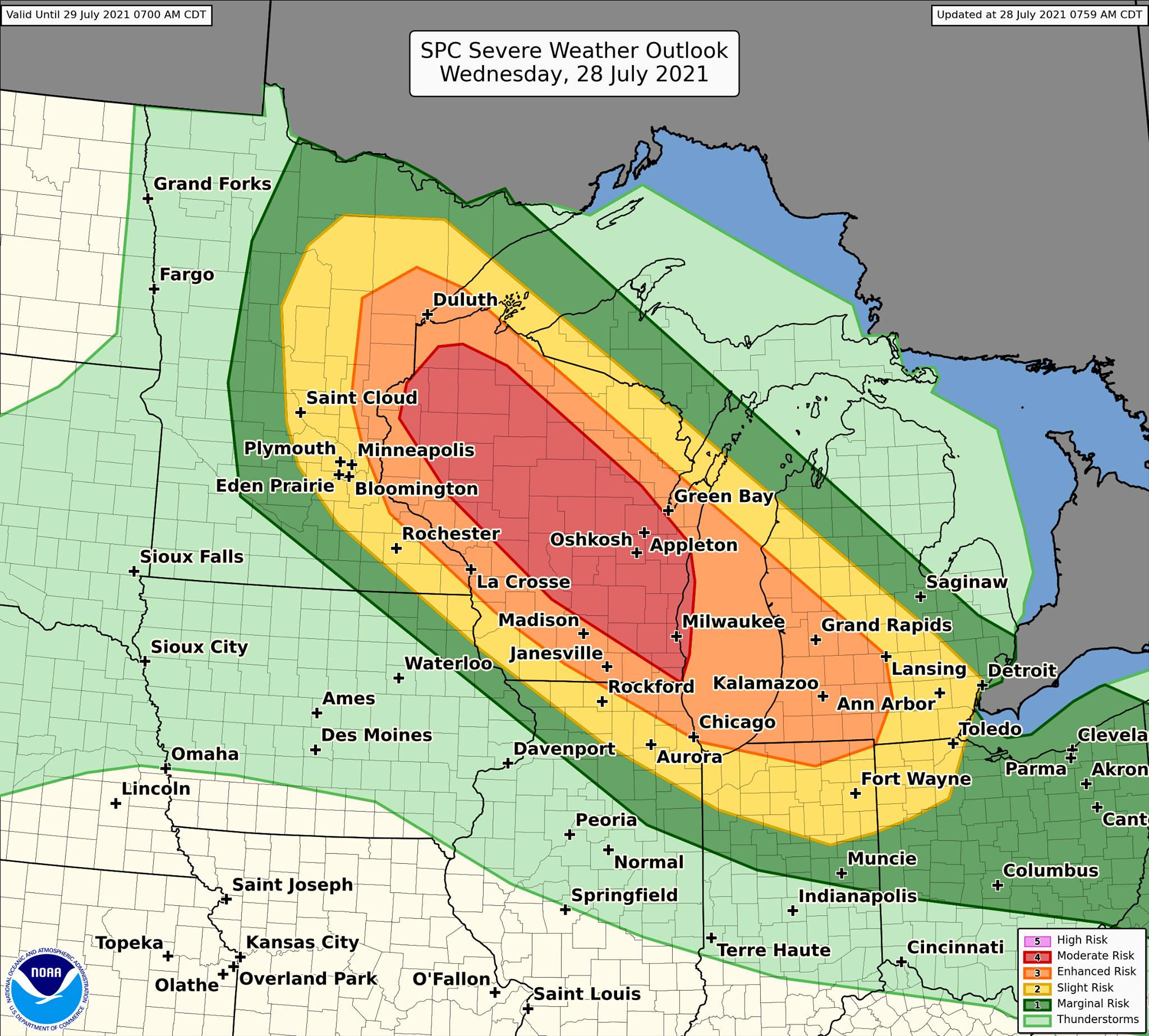 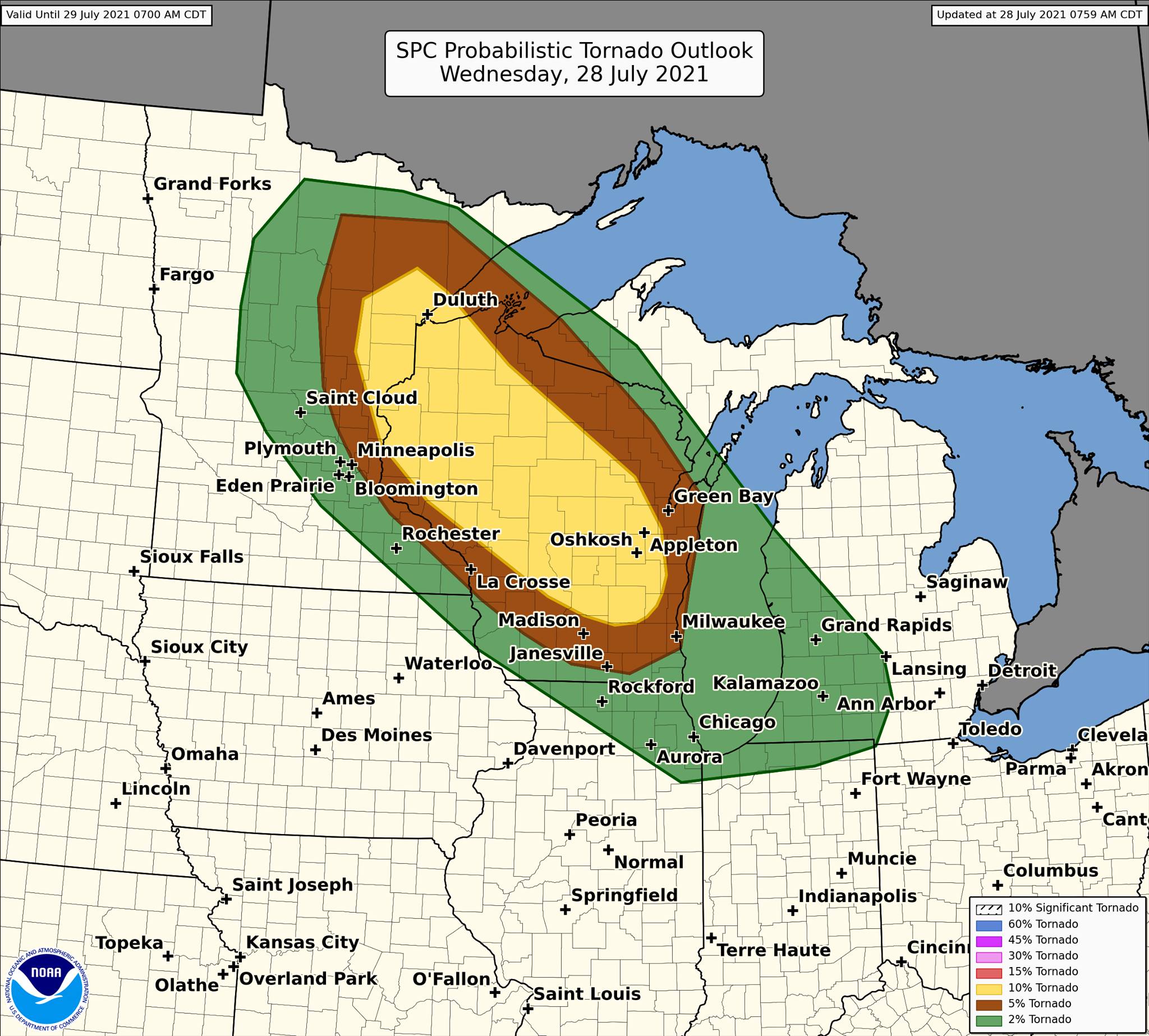 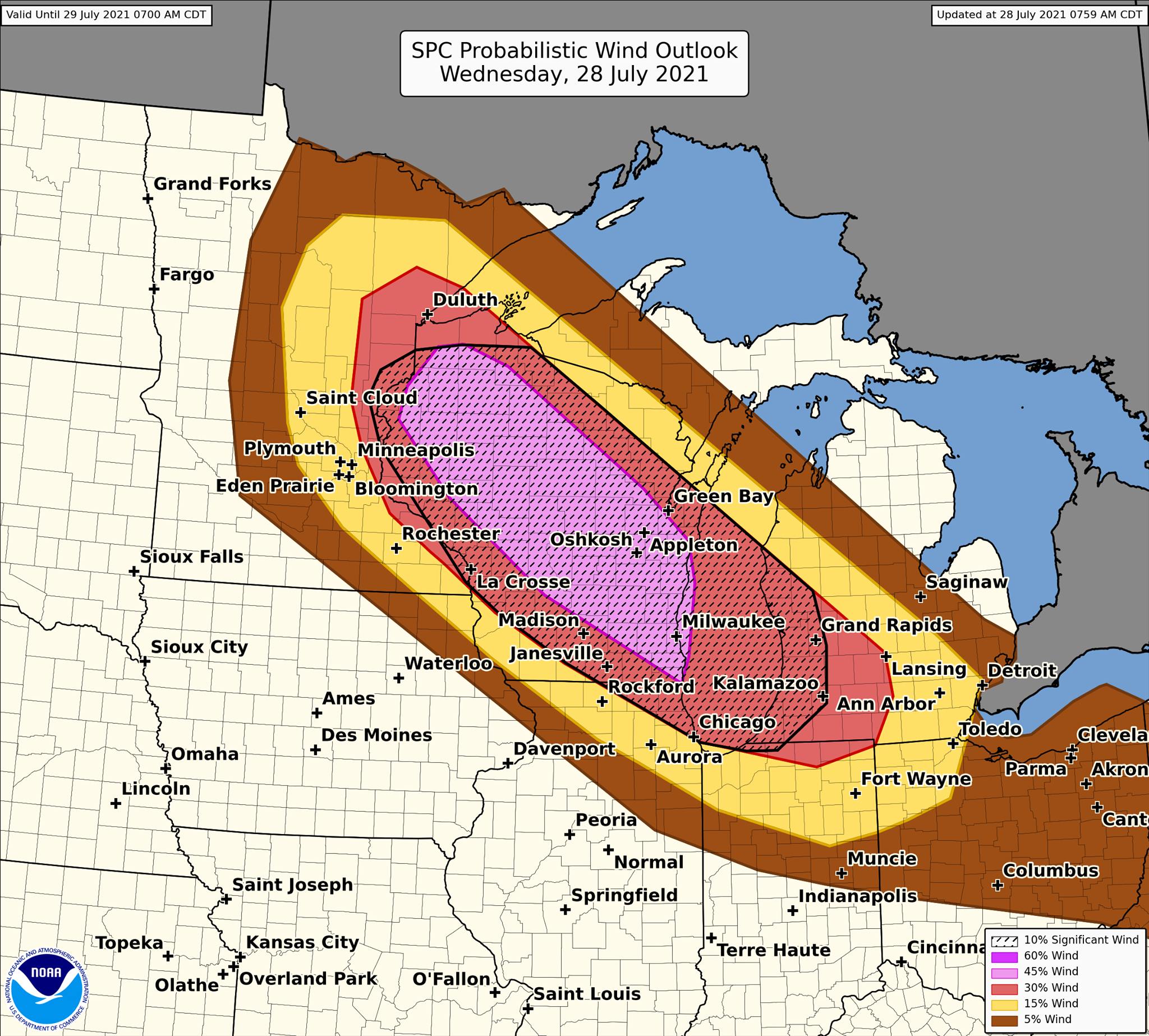 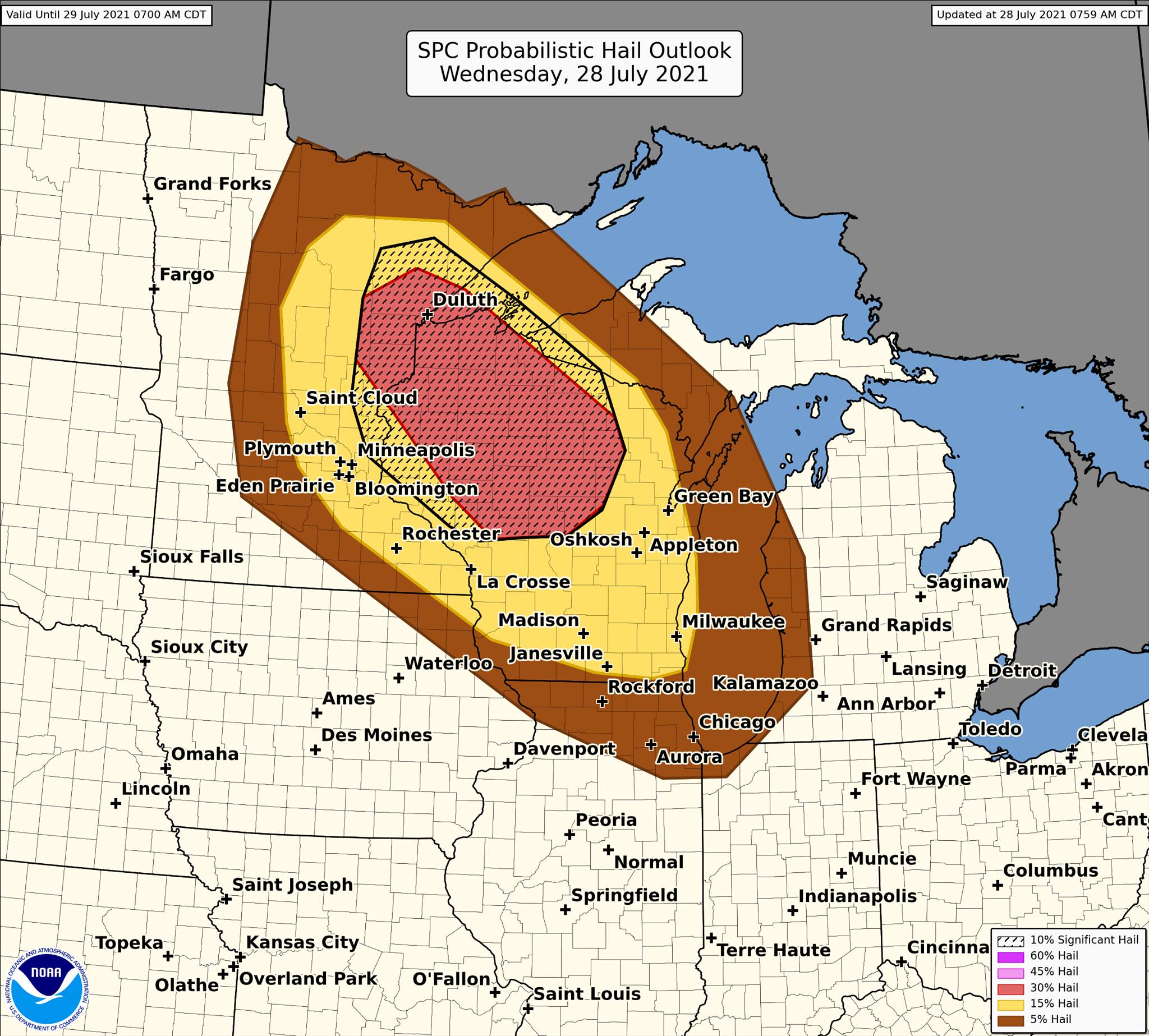 In mid/upper levels, a rather stagnant large-scale pattern is expected over the CONUS, with a strong anticyclone covering much of the central/northern Rockies and central/southern Plains, to the Mid-South region. To its northeast, a belt of somewhat difluent Northwest flow aloft will remain from central Canada across the upper Great Lakes, becoming cyclonic over the lower Great Lakes and Northeast.

Within that flow belt, a subtle shortwave trough — now apparent in moisture-channel imagery over parts of SK and MT — will move quickly away from the northern Rockies mean-ridge position, to the eastern ND/northern MN vicinity by 00Z. This perturbation should proceed southeastward across the upper Great Lakes overnight, with some likely convective vorticity augmentation/reinforcement.

The warm front should move northward across eastern MN and western/central WI ahead of the low, especially once ongoing convective influences clear out of the area (below). The warm-frontal zone will move more slowly over southeastern WI and southern MI.

CLOSER LOOK AT RISK BY STATE 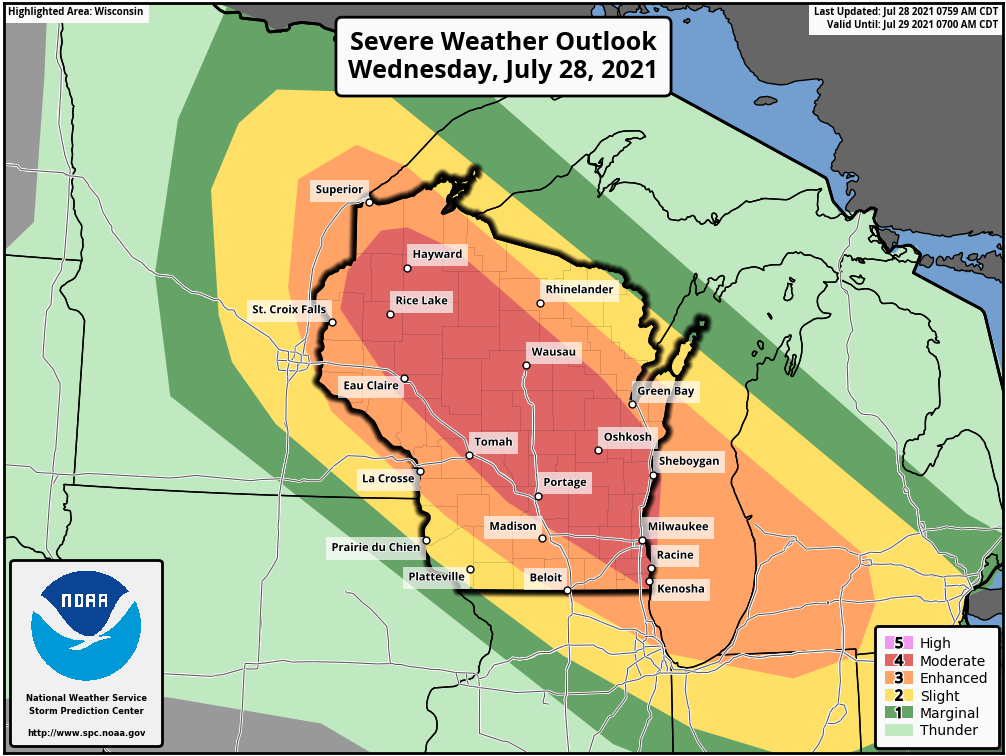 The main severe threat will arise from southeastward-moving supercells developing this afternoon over parts of northern MN and northwestern WI. This activity will pose a threat for significant/destructive hail, a few tornadoes, and severe gusts.

At some point, likely over WI but with some lingering uncertainty how far southeast, activity should expand into an MCS capable of severe gusts and tornadoes across the remainder of southern/eastern this evening, shifting into the southern Lake Michigan and lower MI vicinity tonight. A derecho may occur, with embedded channels of hurricane-force gusts.

Isolated severe hail and gusts remain possible from an ongoing area of thunderstorms (with elevated low-level inflow) across portions of MN and into western WI, before activity weakens later this morning. Associated precip has been falling into an already high-theta-e, moisture-rich boundary layer, with some cooling/stabilizing influence, but not to the extent expected with a drier antecedent boundary layer.

However, associated thick cloud cover can impede/delay substantial diurnal heating by a few hours today, especially over WI, with a differential-heating zone acting as the effective warm front. Airmass recovery is expected behind the morning convection during mid/late afternoon, by means of both boundary-layer theta-e advection and diabatic heating/destabilization.

This process should progress from west to east across the outlook area and effectively relocate the warm-frontal position northward. The rich low-level moisture content (supporting surface dew points commonly in the 70s F south of the warm-frontal zone) will underlie steep midlevel lapse rates apparent in 12Z ABR/MPX RAOBs this morning.

That, along with a deep troposphere, will contribute to MLCAPE values in the 2500-4500 J/kg range near and especially south of the warm front today over MN/WI, and over 2000 J/kg as far southeast as northeastern IL and perhaps parts of southwestern Lower MI. Vertical shear will be greatest near the warm front, but favorable in the warm sector as well, with effective SRH 300-600 J/kg in the frontal zone, along with 50-70-kt effective-shear magnitudes area-wide.

This parameter space is quite favorable for severe of all types, with convective mode being the principal determinant. Whether or not the timing/location of the upscale storm transition permits the event to be classified officially as a derecho in hindsight, there is strong concern it will have that kind of intense and destructive wind impact for at least a few hours. 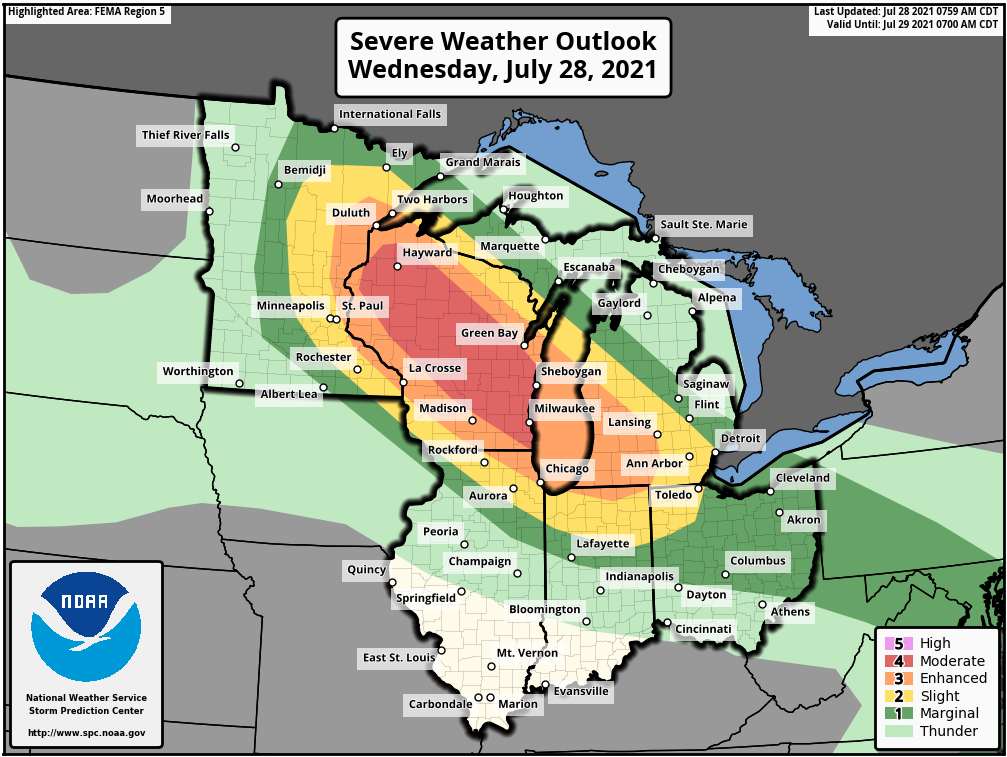 That said, preceding supercells in the northeastern MN/northern WI area may be more long-tracked and pose a more-sustained threat of large to very large hail and tornadoes than evident earlier.

The downshear side of the hail and wind probabilities have been shifted somewhat southeastward along the corridor accordingly.

Also, the 15%+ probabilities in hail and wind have been expanded laterally to account for:

1. Uncertainty (margin for error) in both axis and width extent of the supercell and later MCS coverage, and

2. Potential for a wider wind-producing thunderstorm swath (with a few embedded/QLCS tornadoes possible) near the warm front, whatever its specific axial position.

Although large-scale support aloft will be weak at best, diurnal heating of a richly moist air mass will reduce MLCINH through mid-late afternoon in support of isolated to scattered thunderstorms — especially east of the Appalachians.

Damaging gusts will be the main concern. Sea-breeze/bay-breeze boundaries also may assist with convective initiation over near-coastal areas.