An East Coast storm will develop early this week, and it may bring some locations in the Midwest, Appalachians and interior Northeast their first accumulating snow of the season.

This storm system will first develop across the southern Plains today where snow and sleet are already falling in parts of Colorado, Kansas and New Mexico.

Winter storm warnings, watches and winter weather advisories have been posted by the National Weather Service for parts of the Colorado Front Range, northeastern New Mexico, the Oklahoma and Texas panhandles, central Oklahoma and portions of Kansas.

The ongoing snow comes ahead of a surge of arctic air that will bring the coldest air of the season. This colder air will swing eastward into the upcoming work week as the jet stream takes a pronounced southward plunge over the central U.S.

When this southward jet stream plunge pivots eastward, low pressure typically forms at the surface and strengthens near or off the East Coast.

This low-pressure system will likely track from the northern Gulf Coast through the central Carolinas Monday, then near the Interstate 95 corridor in the mid-Atlantic and Northeast by Tuesday.

This system will produce snow if moisture from the storm interacts with cold-enough air, but where the cold air doesn’t hold, rain will dominate instead. Moderate to locally heavy rainfall is expected across the South and into the East.

A few introductory flurries will fly across the northern Rockies. Some of the central and southern Rockies and High Plains from Colorado to northern New Mexico will see snow, gradually becoming more widespread and heavier Sunday afternoon and evening.

Winter storm warnings, watches and winter weather advisories have been posted by the National Weather Service for parts of the Colorado Front Range, northeastern New Mexico, the Oklahoma and Texas panhandles, central Oklahoma and portions of Kansas.

Winter Storm Warnings is in effect for Amarillo, Texas, where the NWS said 4 to 7 inches of snow is possible between Sunday evening and about midday Monday. Gusty winds are also expected to produce blowing and drifting snow, significantly reducing visibility at times. 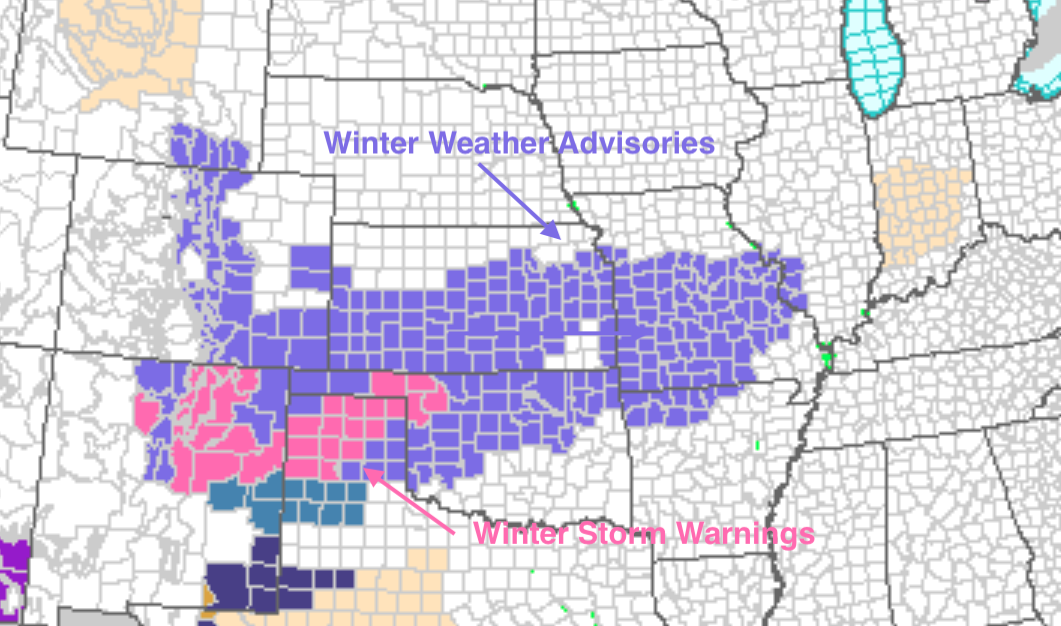 With any forecasts related to winter weather, it is important to make note that exact numbers ALWAYS fluctuate and at times the exact placement of the freeze line often always shifts. The main brunt of this storm system will be across Texas into Oklahoma. However, Missouri, Arkansas, Illinois, Indiana, and Ohio into the northeast will feel the impacts.

A swath of generally light to moderate accumulating snow is expected from the central and southern High Plains to the Midwest. Some locally heavy amounts are possible in the Front Range of southern Colorado and the High Plains of the Texas Panhandle and western Oklahoma. For a number of locations in this swath, it could be their season’s first accumulating snow.