Storms are expected by mid-to-late afternoon ahead of an eastward progressing cold front.

Widespread damaging winds (some 75 mph or greater) will be the main hazard with storms today, though a couple of tornadoes and isolated large hail also are possible through this evening. 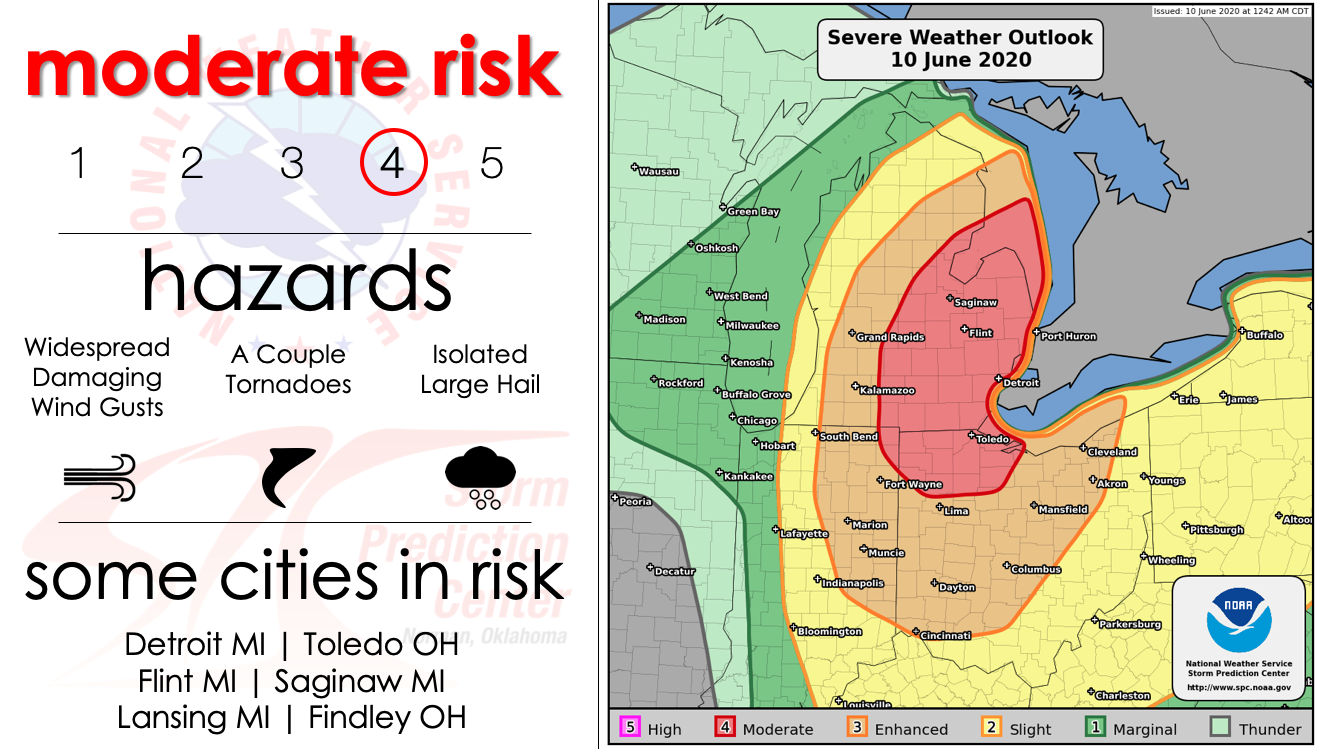 A regional outbreak of severe thunderstorms, primarily in the form of widespread damaging winds, are expected across Lower Michigan and eastern Indiana into Ohio mainly this afternoon and evening. Morning water vapor imagery features a relatively compact mid-level shortwave trough centered near the Kansas City area in the predawn hours.

As it ejects northeastward and takes on a negative tilt, this shortwave trough will increasingly phase with the remnants of Cristobal and a broad trough over northern Ontario/Lake Superior vicinity. The now extratropical remnants of Cristobal have contributed to a very moist air mass across the region, with lower 70s F surface dewpoints prevalent (as far north as northern Lower Michigan) to the east of an east-northeastward moving cold front.

This advancing cold front will spread across Lower Michigan/Indiana and western Ohio/east-central Kentucky through peak heating/early evening. Mid-level height falls between 120-150m will overspread the region and large-scale forcing for ascent will encourage an upward-evolving pre-frontal convective corridor.

Moderate pre-frontal buoyancy with 2000+ J/kg MLCAPE will ensure robust updrafts that should remain organized within the strongly sheared regime. Near the front, increasing bands of storms are already noted just after sunrise across east-central/northeast Illinois.

These storms are likely incipient signs of increasingly organized/intense storms that are expected to evolve east-northeastward through early afternoon into Indiana/Lower Michigan.

With a tendency for strengthening but backing (south-southwesterly) winds through much of the lower/mid-troposphere, aside from more of a westerly mid-level component along/south of the Ohio River, it appears a mixed storm mode will evolve with initial supercells giving way to more prevalent fast-moving line segments/clusters and evolving bowing segments. Mean storm motions around 45 kt/50+ mph are expected with these storms.

Widespread damaging winds are likely to be the most common impact from the fast-moving storms, particularly as they merge/evolve into northeastward-racing bands and bows this afternoon through early evening.

Isolated large hail will also be possible, particularly within the first couple of hours of surface-based initiation when storms may be in more of a semi-discrete supercellular form. 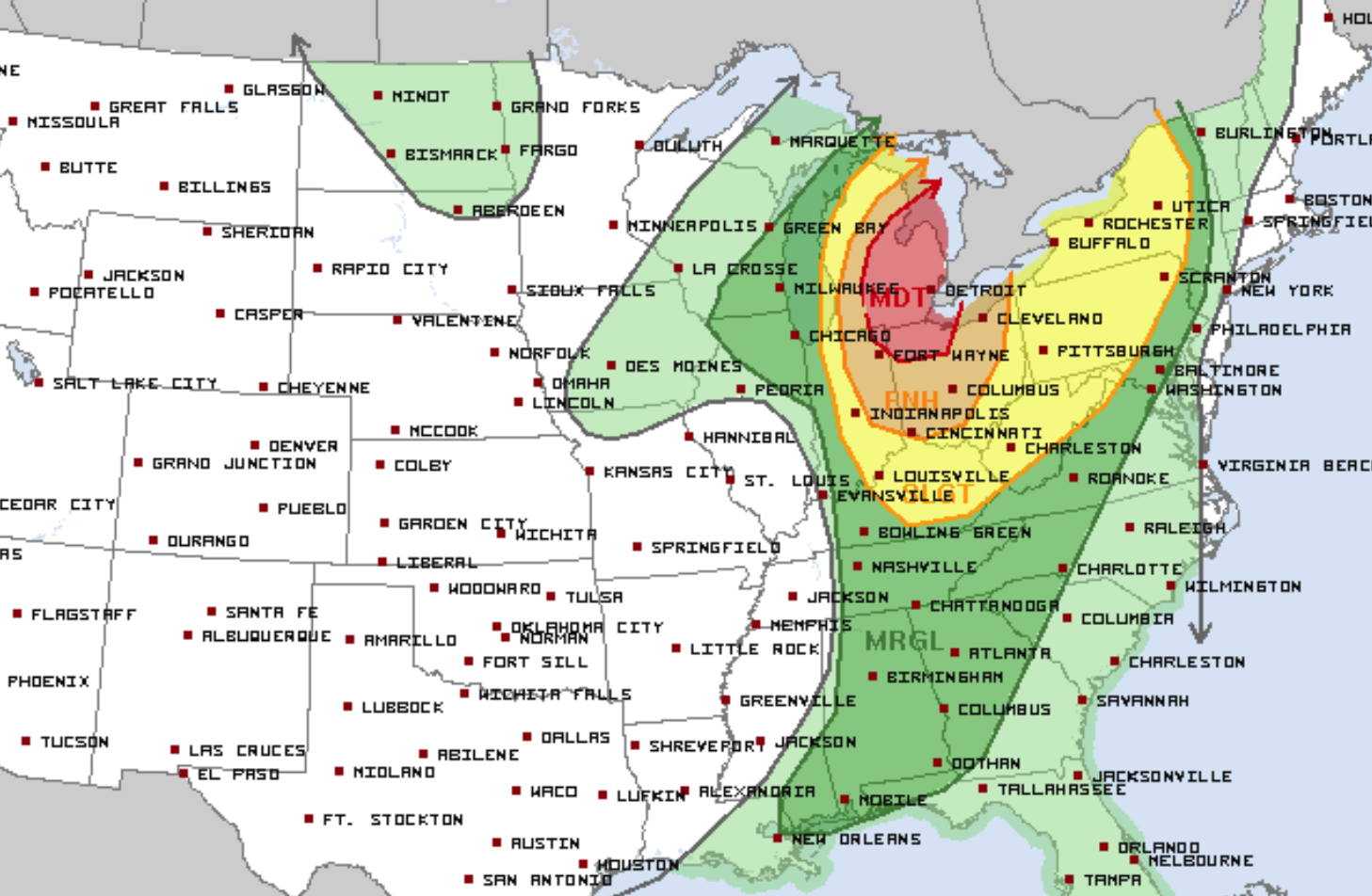 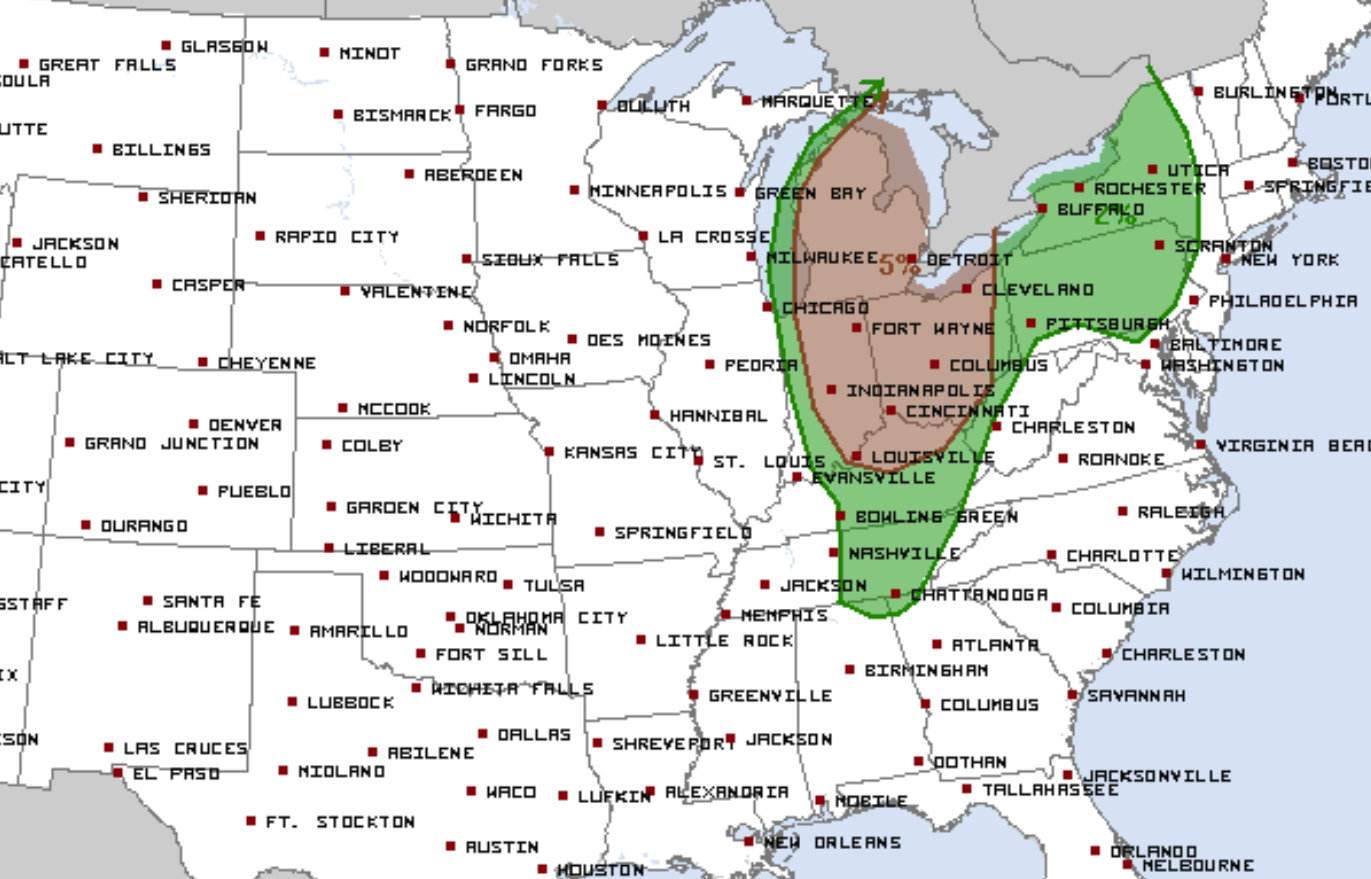 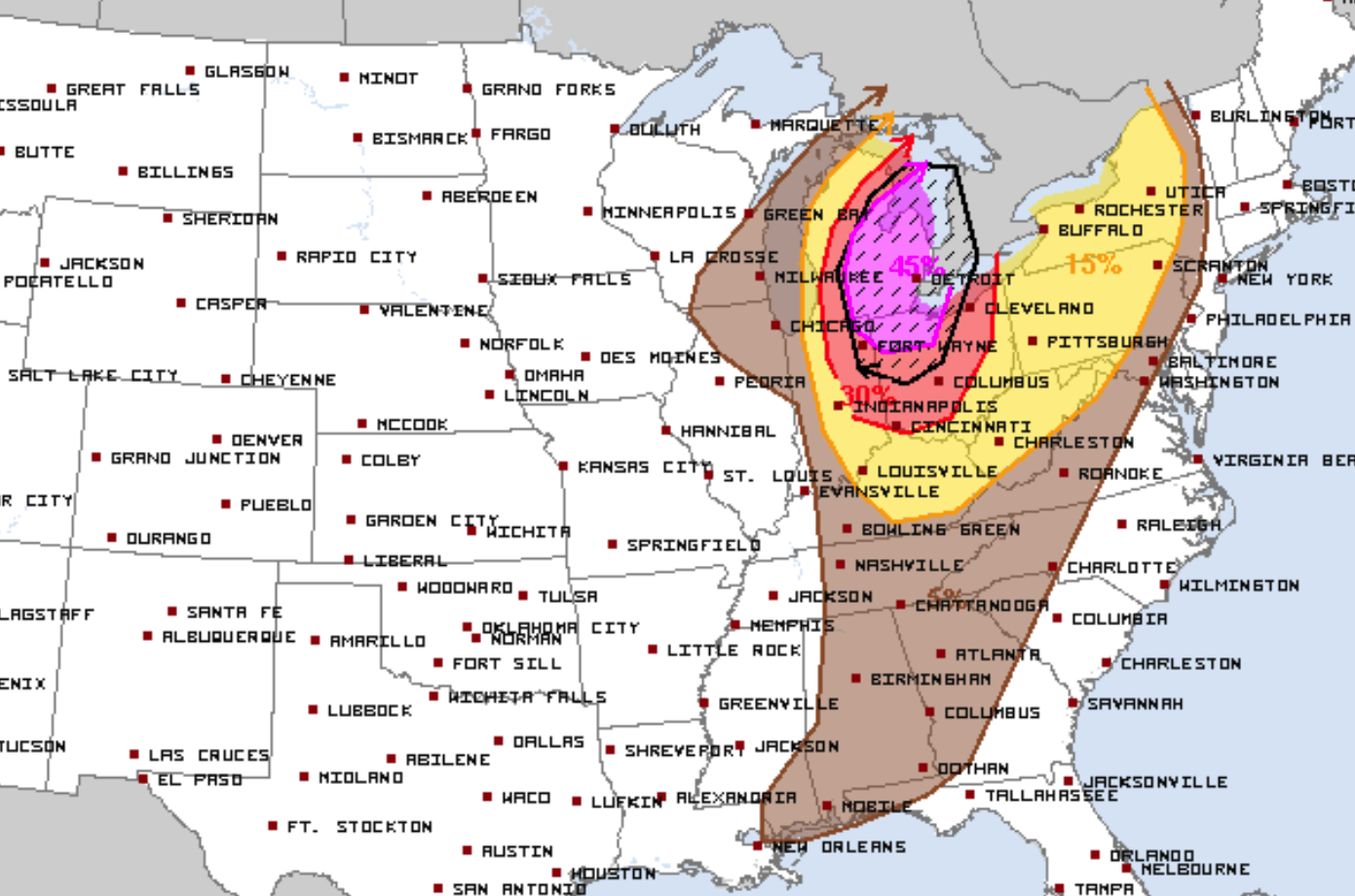 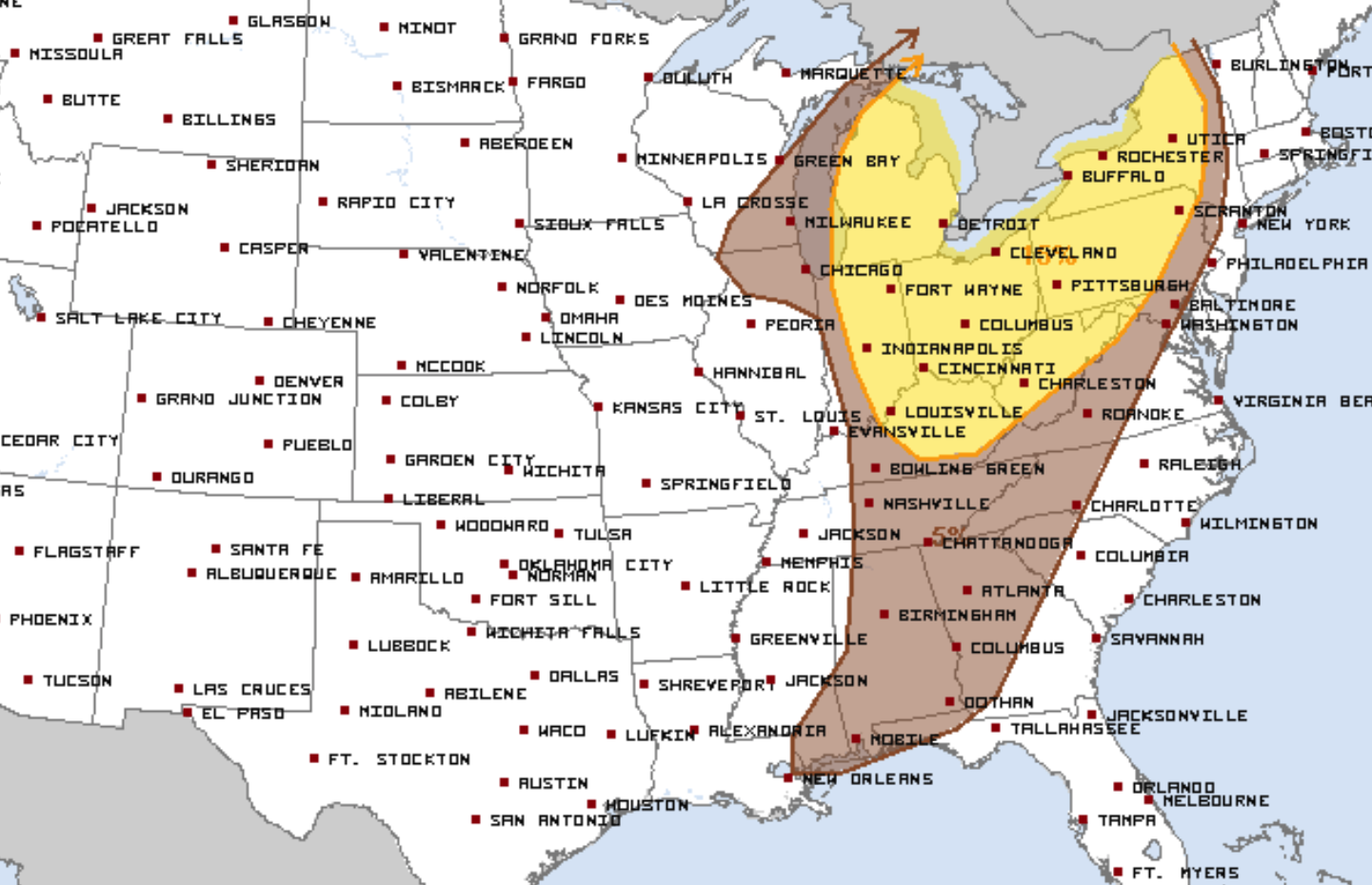 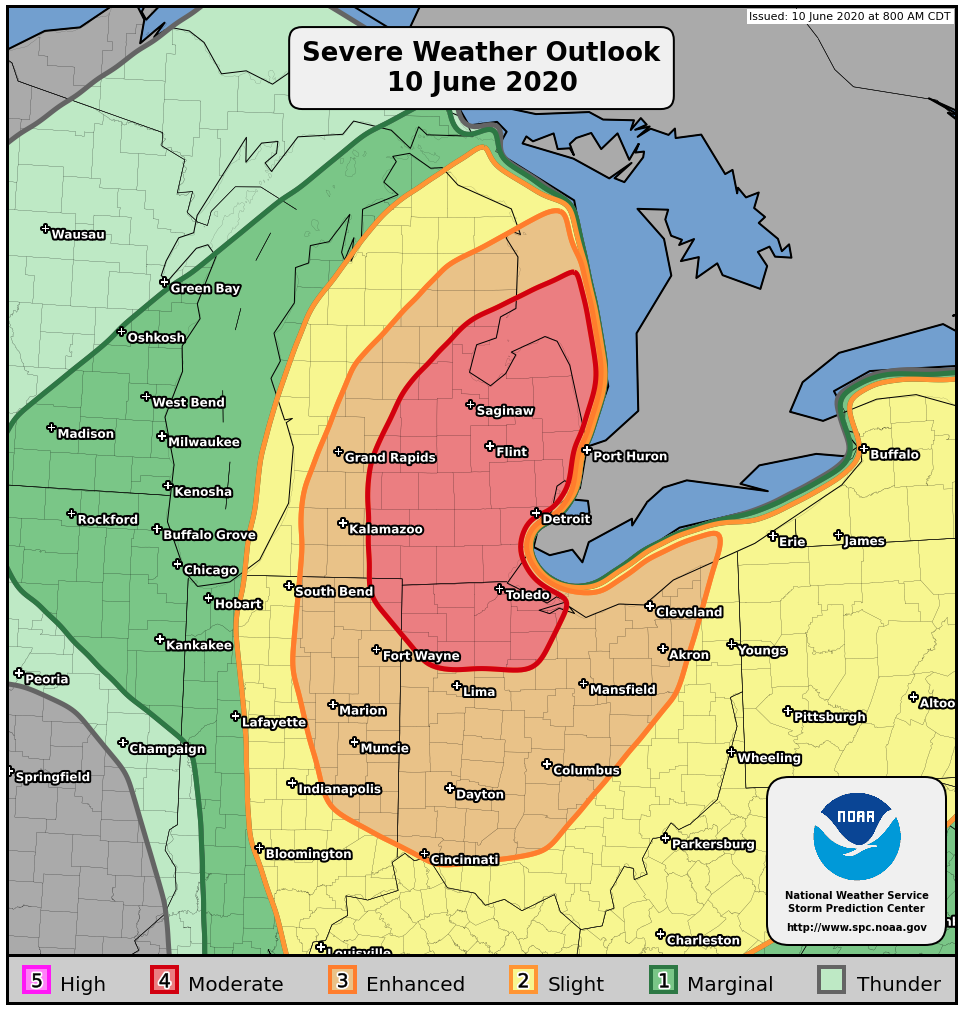 A lead/weak belt of ascent and strong heating across the region will contribute to scattered thunderstorm development by early afternoon well ahead of the upstream upper trough and synoptic cold front.

This activity will not be robustly forced, but moderate destabilization in the presence of 30-40 kt effective shear, which will be maximized across Pennsylvania and northern Maryland/southern New York, will allow for some risk for storms capable of isolated severe wind and possibly some hail.

Multiple bands of showers and thunderstorms will occur in areas along and east of the east/southeastward-advancing cold front today. An intensification of storms is probable into the afternoon as the very moist air mass preceding the front diurnal destabilizes, particularly if cloud breaks become more prevalent.

Only modest deep-layer shear (25-35 kt) will exist over the region, relatively strongest over the Tennessee Valley where a few supercells could occur. That said, multicells will be most common across the region with isolated damaging winds the most probable severe risk. Severe hail potential will tend to be limited by aforementioned modest deep-layer shear and weak mid-level lapse rates. SPC/Storm Prediction Center: Guyer/Leitman.. 06/10/2020