A Moderate Risk for All modes of Severe Weather – Primarily Damaging Winds!

Severe thunderstorms are expected across portions of the northern Plains into the Upper Midwest this afternoon into the overnight. 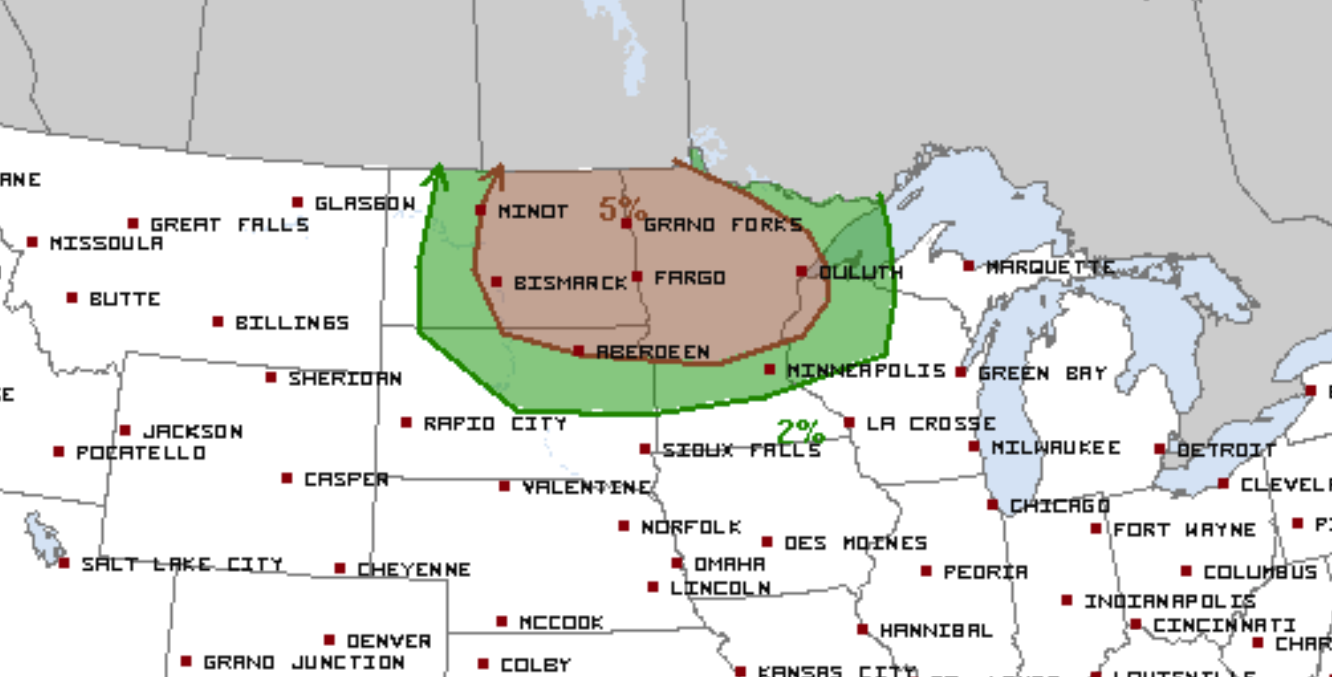 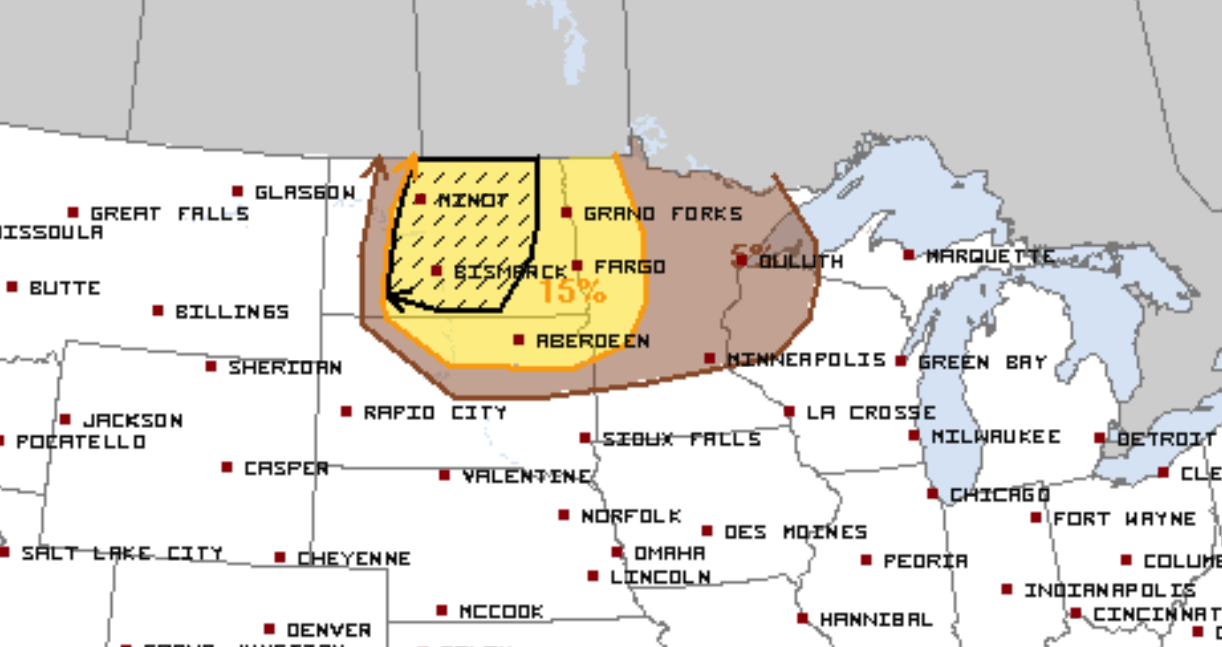 In mid/upper levels, a belt of nearly zonal flow will prevail across the northern tier of the CONUS, from the Pacific Northwest across the Great Lakes and New England.

The main perturbation involved is a trough now evident in moisture-channel imagery near the coastal Northwest, and forecast to reach central MT by 12Z tomorrow.

Ahead of that, smaller-scale vorticity lobes and shortwaves are expected, including a subtle feature currently apparent from the western MT mountains southward to central/south-central ID. The latter feature should reach the western border of the Dakotas around 00Z, and western MN 12 hours later. 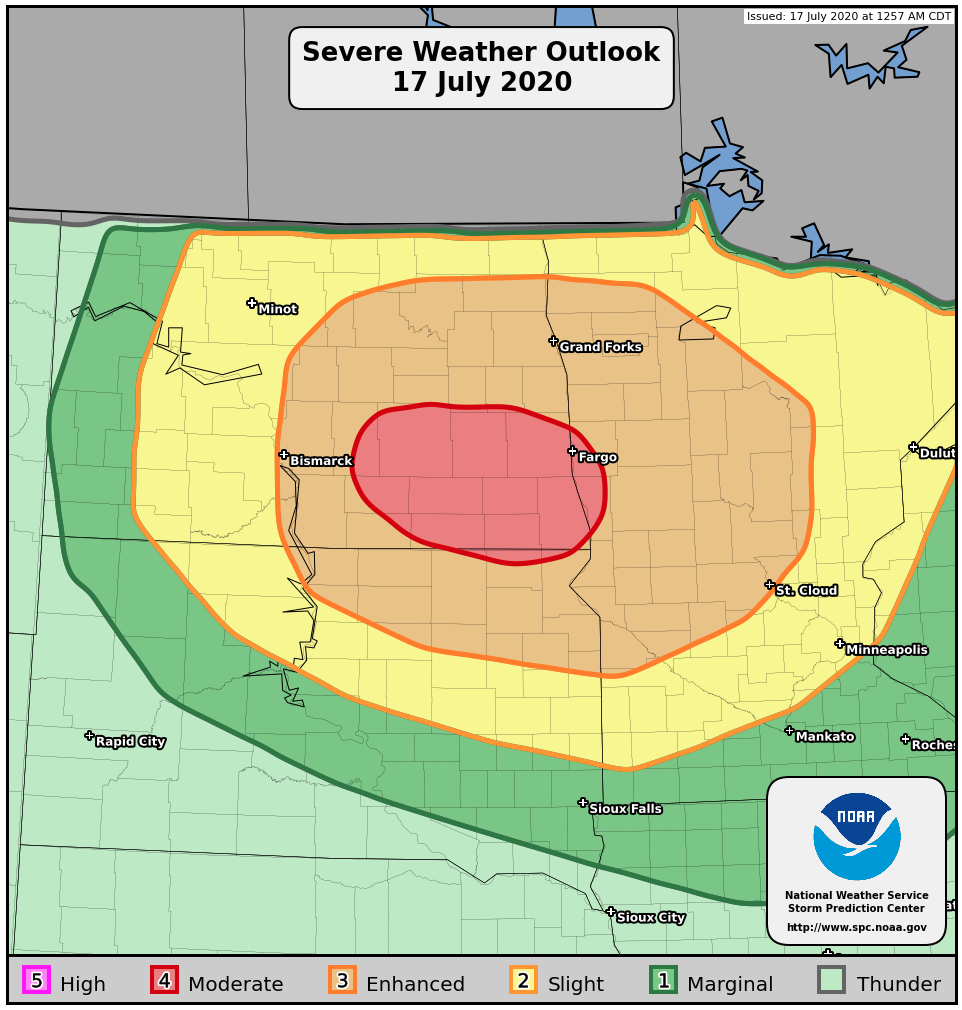 The cold front is forecast to move eastward to the central Dakotas by 00Z, then reach northwestern MN, eastern SD, and central WY by 12Z. The warm front will move northward across much of ND, MN and WI through the period, possibly reaching western Lake Superior before the front at that longitude is overtaken by the convective complex discussed below.

Widely scattered thunderstorms should develop from mid to late afternoon along/ahead of the cold front, from the triple point near the international border southward across west-central or central ND. Supercells with severe to very large hail, a few tornadoes and sporadic severe winds will be possible in the first few hours of the convective cycle across portions of ND.

Activity should evolve upscale with eastward extent into this evening, building a well-organized cold pool, with severe wind becoming the dominant hazard, a QLCS tornado threat on a localized/brief basis, and isolated severe hail.

The most important change for this outlook cycle was twofold:

1. A northward compression of the probabilities in deference to forecast forward-propagational MCS-motion vectors closer to the warm front, where both lift and storm-relative winds in low levels will be maximized as well.

2. An eastward extension of probabilities for wind potential extending into the late-overnight time frame. The warm front will be aligned west-northwest/east-southeast ahead of the MCS, but also should move northward across northern MN/WI and the western U.P. prior to its arrival in those areas, further supporting a more eastward probable track.

Activity will be encouraged by combination of steep low/middle-level lapse rates related to the EML, and modest MLCINH on the EML’s northern rim that can be overcome with frontal lift, diurnal heating and very rich low-level moisture.

Hodographs should be relatively enlarged along and near the warm front as well, in support of supercell potential early and a tornado threat where the later MCS encounters the boundary. Depending on mesobeta- to storm-scale processes like cold-pool width/depth and associated isallobaric/thermal perturbations, resultant leading-edge acceleration may thrust damaging-wind potential into western/central upper MI late in the period, before the forced-ascent arc outruns favorable buoyancy at or just above the surface.

The probabilities are tapered gently eastward due to uncertainties over MCS speed. Extent of southward building of the MCS is still uncertain, but will be limited by the EML, related warmer temperatures above the boundary layer, and weaker convective-scale forcing.

Widely scattered thunderstorms should form this afternoon over the higher terrain of southwestern MT, as diurnal heating of the elevated ground preferentially overcomes MLCINH, amidst marginal but sufficient low-level moisture.

Lack of more-robust moisture, with surface dew points mostly in the 40s F in lower elevations, should keep peak/preconvective MLCAPE below 500 J/kg in the area, except on a brief/spotty basis. The threat should end this evening as low-level lapse rates stabilize greatly. 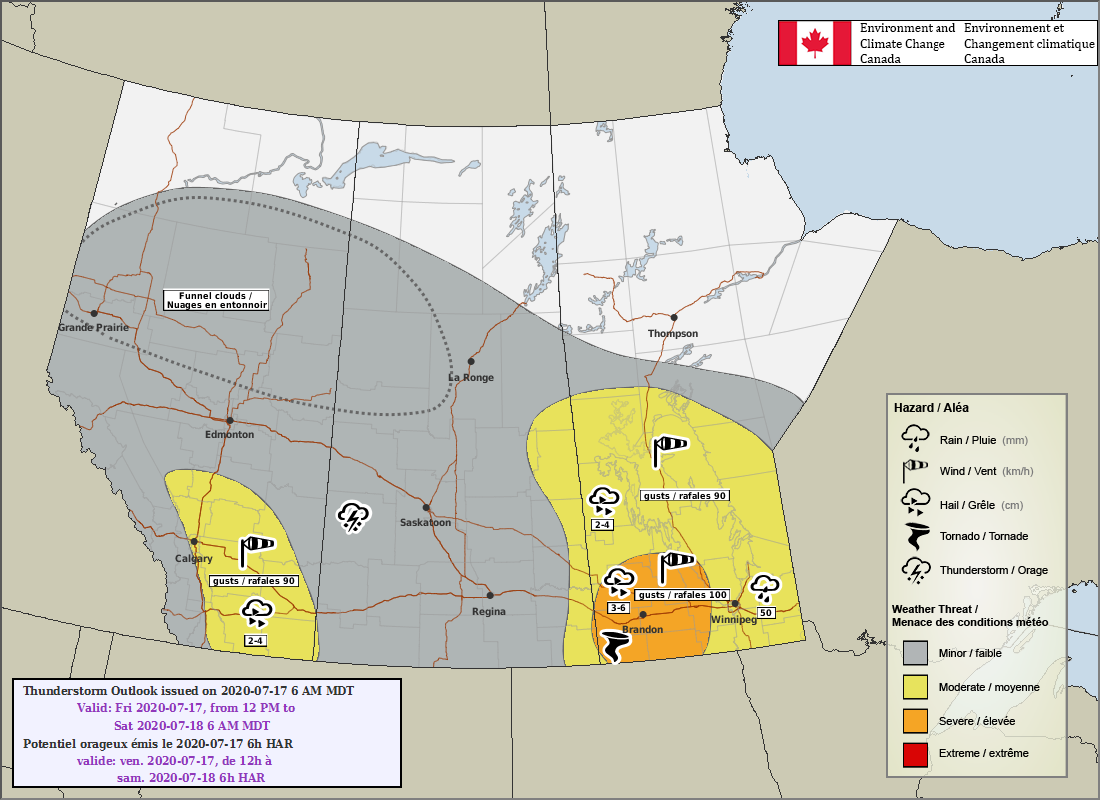 A dryline will trigger thunderstorms along the foothills in the afternoon. These storms could produce 2 to 4 cm hail and 90km/h wind gusts as they move eastwards through the evening. An area of low pressure over northern Alberta will produce generally non-severe thunderstorms with a chance of funnel clouds this afternoon.

A low pressure area moving across southern Saskatchewan and into Manitoba on Friday will lead the formation of showers and thunderstorms across the southern Prairies. Across southern Manitoba and particularly in the southwest corner, these thunderstorms are likely to be severe with the main threats being 2 to 6 cm hail, wind gusts up to 100 km/h and heavy rain up to 50 mm. There is also a chance of a tornado in southwestern Manitoba.

A weak low pressure system near Norman Wells will produce thunderstorms today. Thunderstorms are also expected to develop over the terrain in the western NT.