Couple of tornadoes could be strong if they develop with damaging winds!

SPC HAS UPDATED, SO PLEASE READ OUR UPDATE HERE

Severe thunderstorms may occur Saturday from parts of eastern Oklahoma and Texas into the lower/mid Mississippi Valleys, lower Ohio Valley, and Southeast. The best potential for scattered damaging winds and a few tornadoes appears to be across parts of the ArkLaMiss into northern Mississippi and southwestern Tennessee. A couple of these tornadoes could be strong. 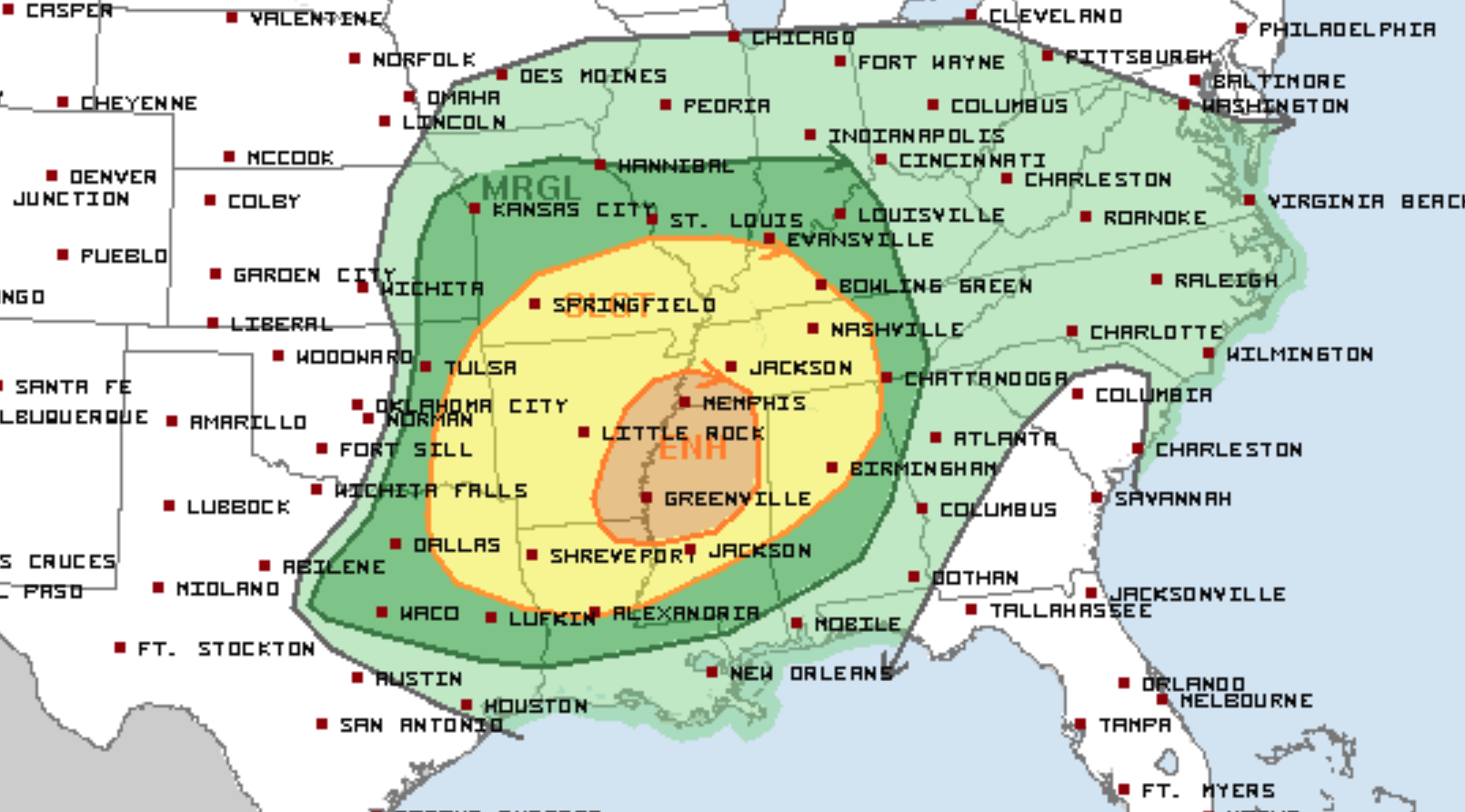 A negatively tilted shortwave trough initially over the southern and central Plains will move rapidly northeastward to the Upper Midwest, Great Lakes, and OH Valley regions by Saturday evening. An associated surface low over central KS should develop northeastward in the same time frame to the vicinity of eastern IA/northern IL while deepening slightly. A cold front attendant to this surface low will sweep eastward across much of the lower/mid MS Valley into the lower OH Valley and Mid-South through the day.

The trailing portion of this front should stall over parts of the Southeast Saturday night as this boundary becomes increasingly aligned parallel to the mid-level flow.

Increasing ascent associated with the approaching shortwave trough and a strengthening low-level jet will likely foster an increase in convective coverage and intensity across parts of eastern OK/TX into the ArkLaTex region early Saturday morning.

These thunderstorms will have some potential to be surface-based, especially along and south I-40 in central AR where surface dewpoints should reach into the mid 60s to the south of a warm front. A couple tornadoes and isolated damaging winds should be the main threat given the strong low-level shear that will be present, although some large hail could also occur as far northward as the Ozarks in southern MO with any elevated supercells that develop.

The main uncertainty regarding the overall magnitude of the severe threat across the lower MS Valley into the Mid South remains the northward extent of potential destabilization. The early morning convection should move quickly east-northeastward in tandem with the low-level jet and surface cold front. It appears that a greater chance for surface-based thunderstorms should occur from parts of the ArkLaMiss region into northern MS and southwestern TN from late Saturday morning into the early afternoon, where MLCAPE of 500-1000 J/kg could develop.

Low-level shear is forecast to be very strong through 18-21Z as a 50-65 kt southwesterly low-level jet overlies this region. Forecast soundings show ample effective SRH to support rotating updrafts, and a few tornadoes could occur, particularly if convection can remain semi-discrete. There is some concern that a couple of these tornadoes could be strong given the very favorable kinematic environment. Scattered damaging winds may also be possible across this region.

By late afternoon into the evening, the shortwave trough and strongest mid-level flow will become increasingly displaced to the north of the greater low-level moisture across the TN Valley and Southeast. Still, some severe threat may persist into parts of middle TN and northern/central AL.

Farther north into the mid MS Valley and lower OH Valley, confidence in sufficient destabilization to support surface-based convection is even more questionable.

Regardless, there will be very strong low- and mid-level flow present which could support isolated damaging winds and perhaps a tornado. This threat should wane with eastward extent across southern IN and central KY by Saturday evening as low-level moisture and related instability become increasingly marginal.