Numerous severe storms are expected across the Plains, especially across southern/eastern Nebraska, western Iowa, and portions of Kansas and Oklahoma late this afternoon and tonight.

The primary threats will be large hail (some very large), and damaging winds (some hurricane force). A few tornadoes may also be possible 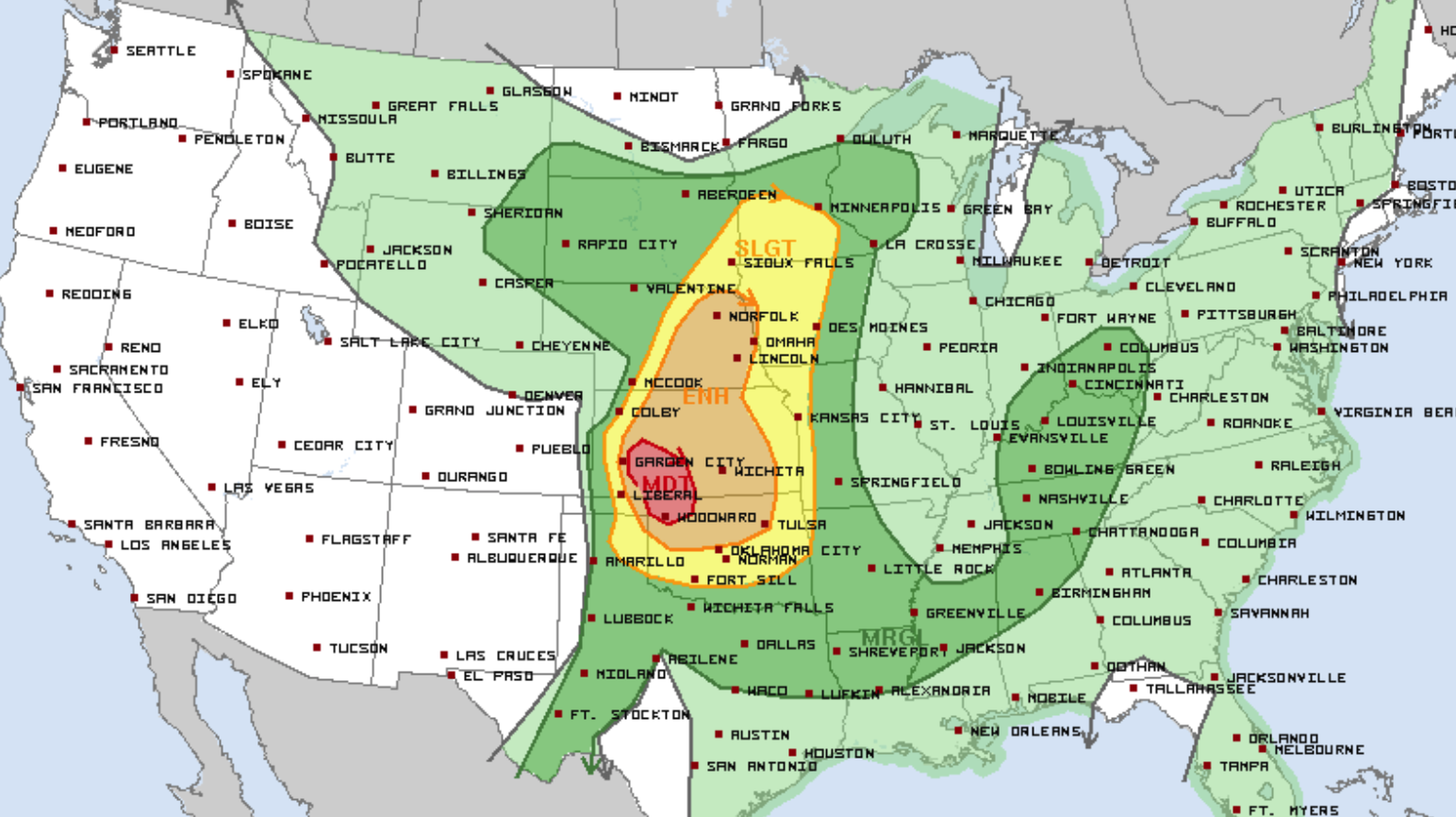 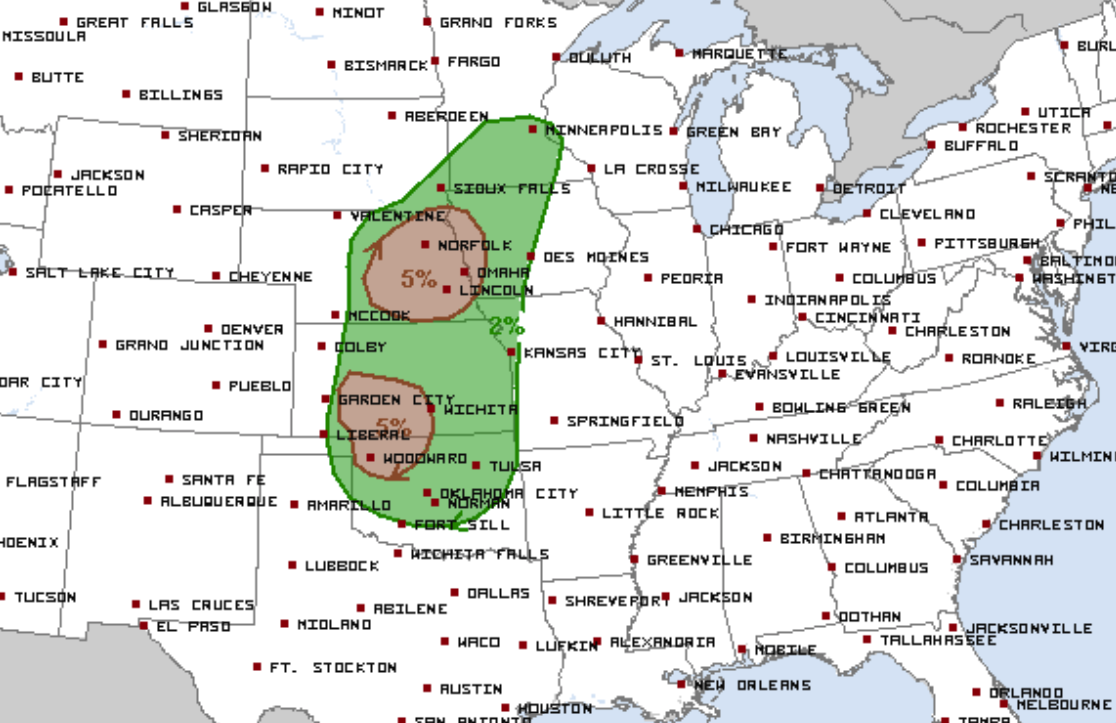 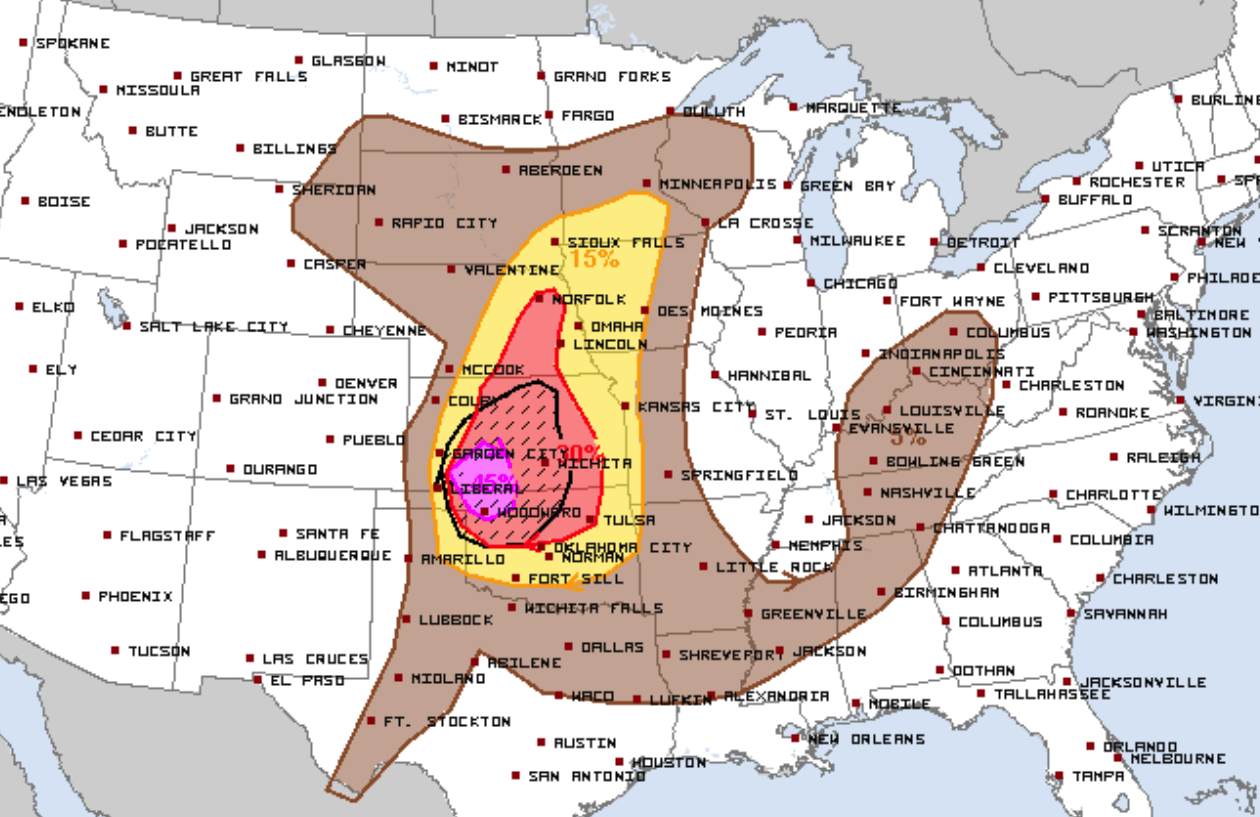 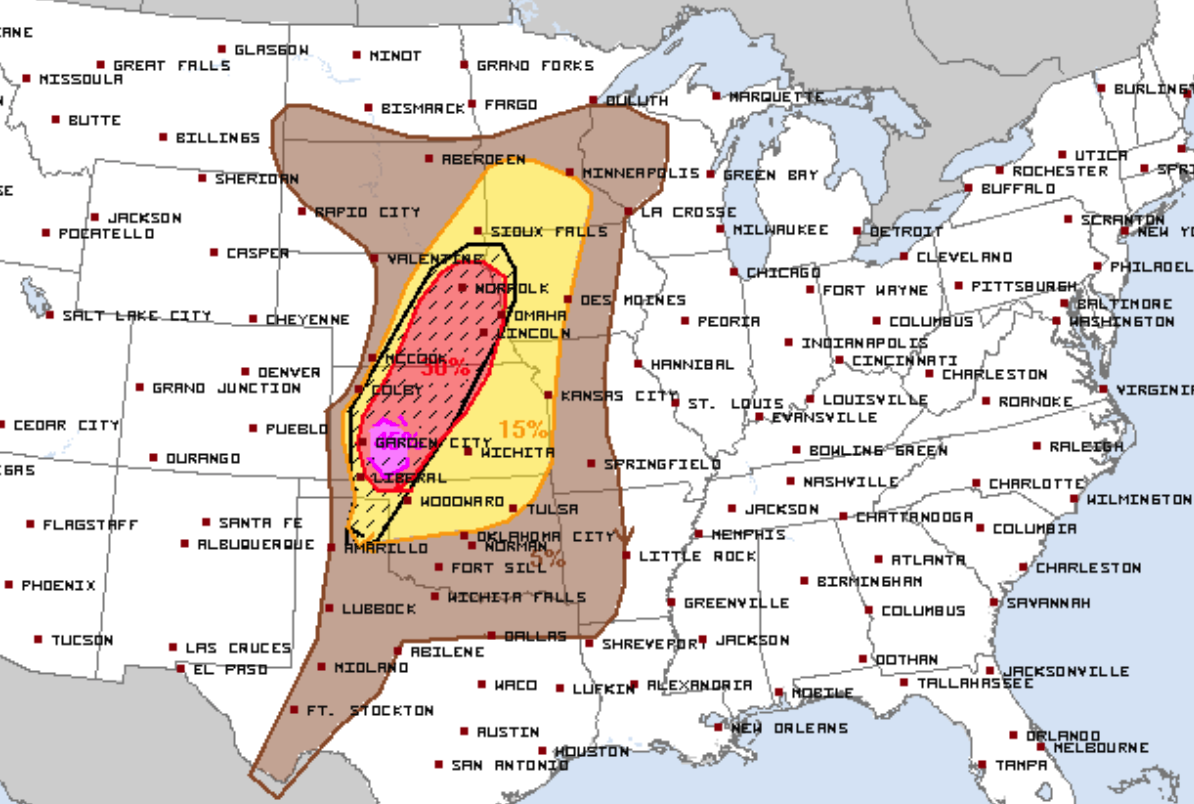 Severe thunderstorms are likely across the region, particularly late this afternoon and tonight across eastern/southern Nebraska, far western Iowa, and portions of Kansas/Oklahoma. A slow-moving MCS continues to gradually decay across southern Oklahoma and north Texas, with this MCS having largely overturned the air mass across the middle part of Oklahoma/I-35 corridor vicinity.

However, strong destabilization is expected especially on the western periphery of the MCS where outflow will continue to modify and the thicker cloud canopy will gradually thin. As sampled by 12Z observed soundings such as Amarillo/Dodge City, a plume of steep mid-level lapse rates will extend atop a moist boundary layer, with upwards of 3000-4500 J/kg MLCAPE expected by peak heating near/east of a surface low/triple point across west-central Kansas, southward into the eastern Texas Panhandle/western Oklahoma near/east of the dryline.

Deep convective initiation may occur as early as mid-afternoon across west-central Kansas, with subsequent development expected across southwest Kansas and possibly the Texas Panhandle/Oklahoma border vicinity. Initial supercells capable of very large hail can be expected, along with some tornado risk.

Storms are expected to gradually congeal/organize into a forward-propagating/southeastward-moving MCS this evening, with the greatest risk for a corridor of potentially widespread severe wind gusts (some significant 75+ mph) and wind-driven hail expected across southwest Kansas into northwest Oklahoma. Farther north, an isolated short-term severe threat may persist early this afternoon across north-central Kansas, but a more consequential severe risk should evolve later this afternoon.

This convection across eastern/south-central Nebraska and north-central Kansas has complicated the scenario to a degree, but severe thunderstorm development is still expected later this afternoon, particularly where outflow intercepts the front across eastern/south-central Nebraska. Severe wind/hail are the primary hazards with some initial supercells likely evolving into southeastward-moving clusters this evening.

An MCV over far western Kentucky will drift across the Ohio Valley today. Diabatic heating will be slowed near the MCV by relatively widespread early-day stratiform. Nevertheless, boundary-layer heating farther east and south of the morning precip may overlap with modest enhancement to mid-level flow to support multicell clustering. Isolated damaging winds should be the primary threat. ..Guyer/Nauslar.. 06/21/2020