Tornadoes and severe wind will be the main concerns today! April 23, 2020

Tornado watches are already in place as this strong storm system continues to push off to the east. 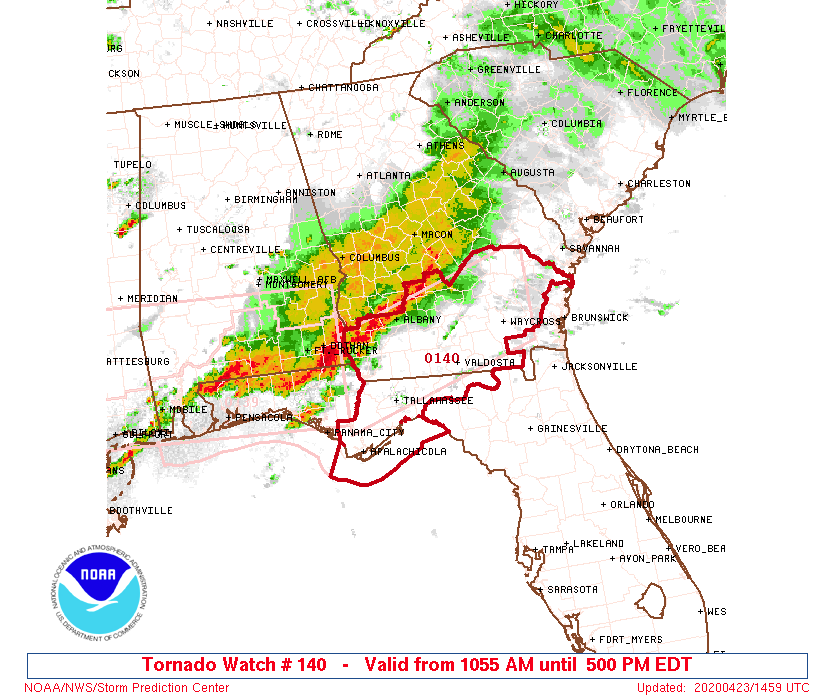 Effective this Thursday morning and afternoon from 1055 AM until 500 PM EDT.

A few tornadoes likely with a couple of intense tornadoes possible

A cluster of intense thunderstorms over southeast Alabama will track eastward today across the watch area. Locally damaging winds and a few tornadoes are the main threats with this activity. 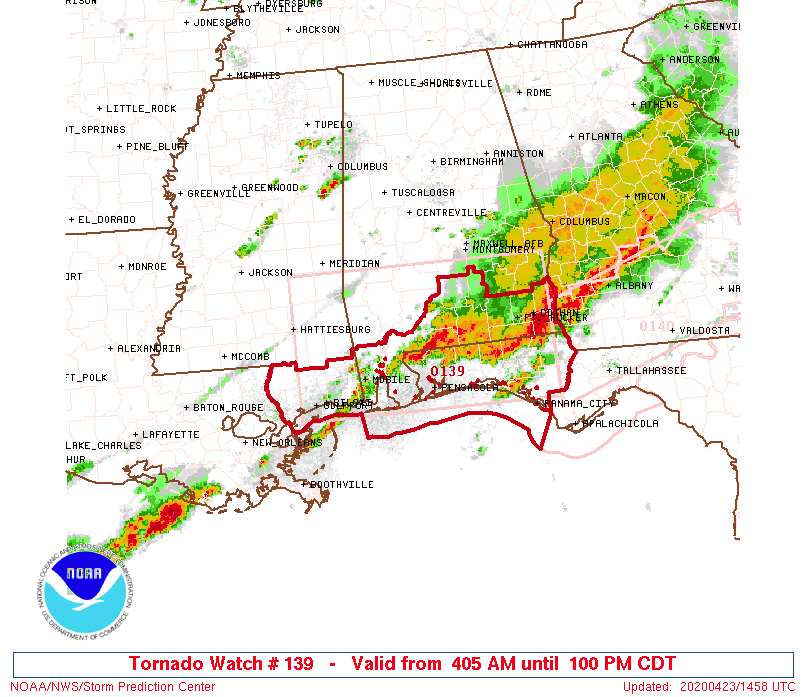 Effective this Thursday morning and afternoon from 405 AM until 100 PM CDT.

A few tornadoes likely with a couple of intense tornadoes possible

A complex of severe thunderstorms, with supercells and potential for line-embedded mesovortices will sweep eastward over the watch area, offering a threat for tornadoes (some strong) as it interacts with a warm-frontal zone along the Gulf Coastal Plain. Damaging wind is likely too, and isolated severe hail cannot be ruled out. 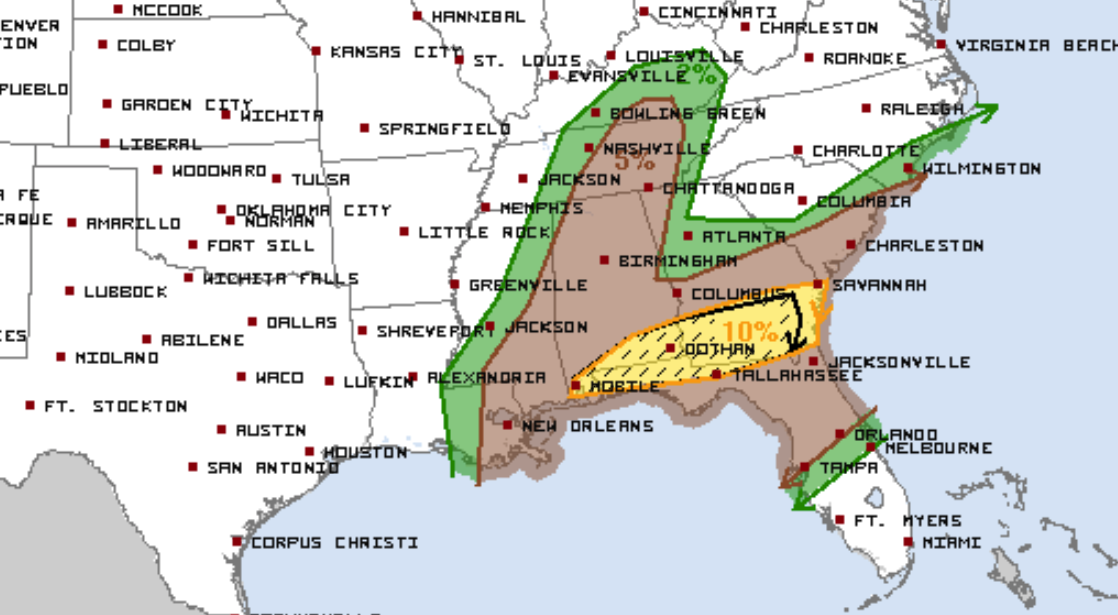 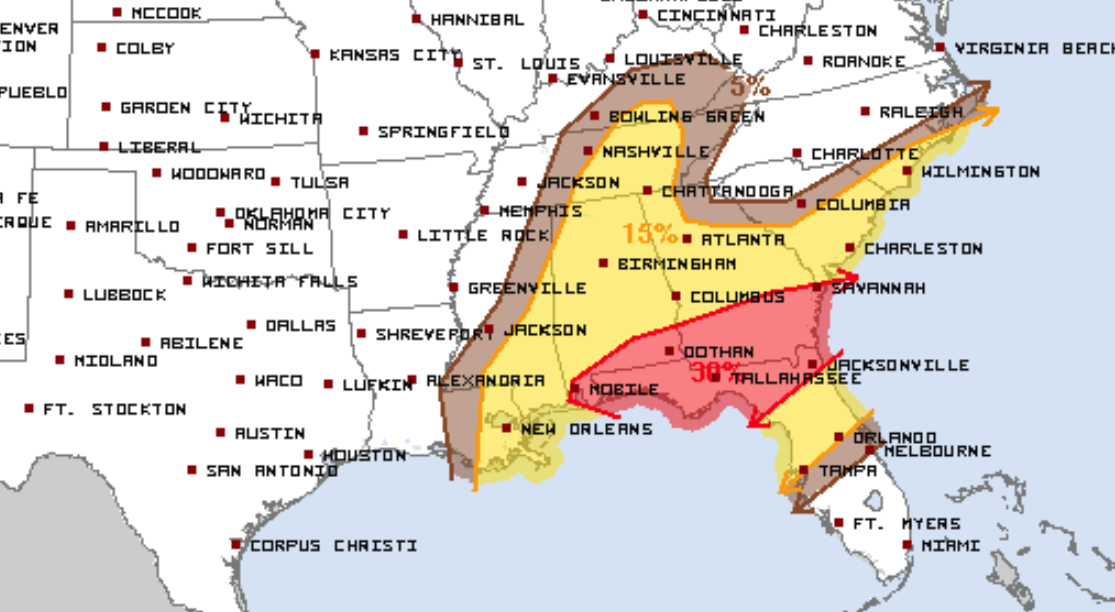 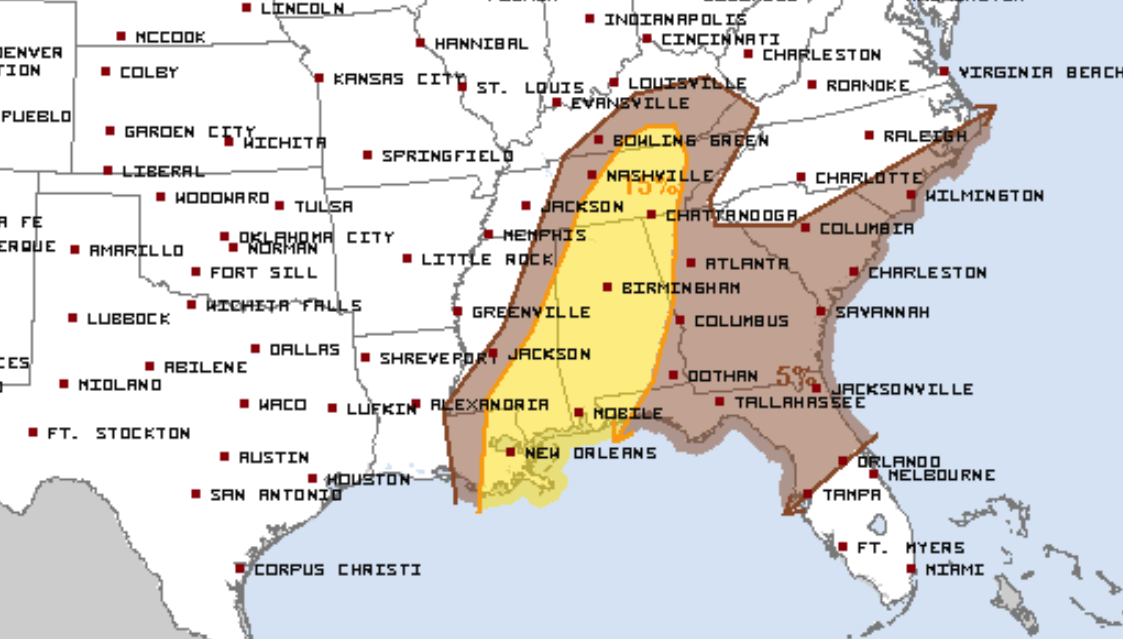 In mid/upper levels, a series of shortwaves will contribute to increasingly cyclonic large-scale flow across much of the central CONUS. The leading of these perturbations, and most crucial for this forecast, is apparent in moisture-channel imagery from a circulation over southern/central MO southwestward across eastern OK, north TX, and northern Coahuila.

This trough will deamplify gradually through the period, but remain fairly well-defined, extending by 00Z from the lowermost Ohio Valley to the upper/middle TX Coast. It should reach eastern portions of KY/TN, northern GA and southern AL by the end of the period.

At the surface, 11Z analysis showed a surface cyclone over the MO/AR Ozarks, with occluded front to northern LA, and cold front southwestward across the mid/upper TX Coastal Plain. The low should move eastward across portions of western/central KY by 00Z, with occluded/cold front across middle TN, central/western AL, and southern LA.

This complex should continue to offer a tornado/wind-damage risk, with isolated/marginally severe hail also possible, as it crosses the Gulf Coastal Plain and eastward to either side of the Florida/ Georgia line, through early afternoon. Additional convection should develop in a comparatively undisturbed air mass to its southwest — perhaps along a trailing outflow/convergence boundary — later this afternoon through tonight. The buoyancy/shear parameter space will be greatest near the Gulf Coast, along and south of the warm front. The area near the front should exhibit enhancement of low-level hodograph size, inflow-layer vorticity, and storm-relative boundary- layer winds, with 200-400 J/kg effective SRH and 45-55-kt effective- shear magnitudes.

In addition to destabilization inland related to warm-frontal passage, muted diurnal heating is expected beneath the anvil-cloud cover. Theta-e advection inland from the Atlantic over parts of southeastern GA also should contribute. The northward extent of the destabilization favorable for surface-based inflow is uncertain, but increasingly appears to be not as vigorous as suggested by earlier guidance, due to the MCS’ projected translation relative to the inland pace of the warm front, and its spread of downshear precip/ clouds well northeastward across GA/Carolinas. As such, some southward shunting of the northern probability lines is warranted. In addition, a band of strong-severe convection may shift as far south as central FL by the end of the period.

Severe potential still exists with a possible second episode, along/ahead of the cold front from the Tennesseee Valley region southward, but is very conditional. Substantial stabilization to near the Gulf Coast is associated with the leading MCS. Only a narrow back door of at least marginally favorable theta-e advection and related airmass recovery will exist to the west, which comes with offsetting influences:

1. Southwesterly near-surface flow ahead of the front will yield the best trajectories for theta-e recovery around the morning MCS outflow, but also contribute to relatively reduced low-level shear and convergence.

2. Any southerly to southeasterly trajectories from the MCS passage will be more convectively stabilized. Still, a narrow plume of favorable buoyancy may develop — with MLCAPE ranging from around 500-1000 J/kg in the north where deep lift, cooling aloft and shear will be greatest, to around 2000 J/kg in the south under weaker ascent and shear. With uncertain coverage, duration and intensity of convection in this regime, the risk level is not as great as farther southeast, and should diminish markedly after dark.