An organized cluster of severe thunderstorms may evolve Saturday in a corridor across the Ozark Plateau through the lower Ohio Valley, with additional severe storms possible across the lower Mississippi into Tennessee Valleys. Considerable wind damage may accompany these storms along with the risk for tornadoes, some of which could be strong. 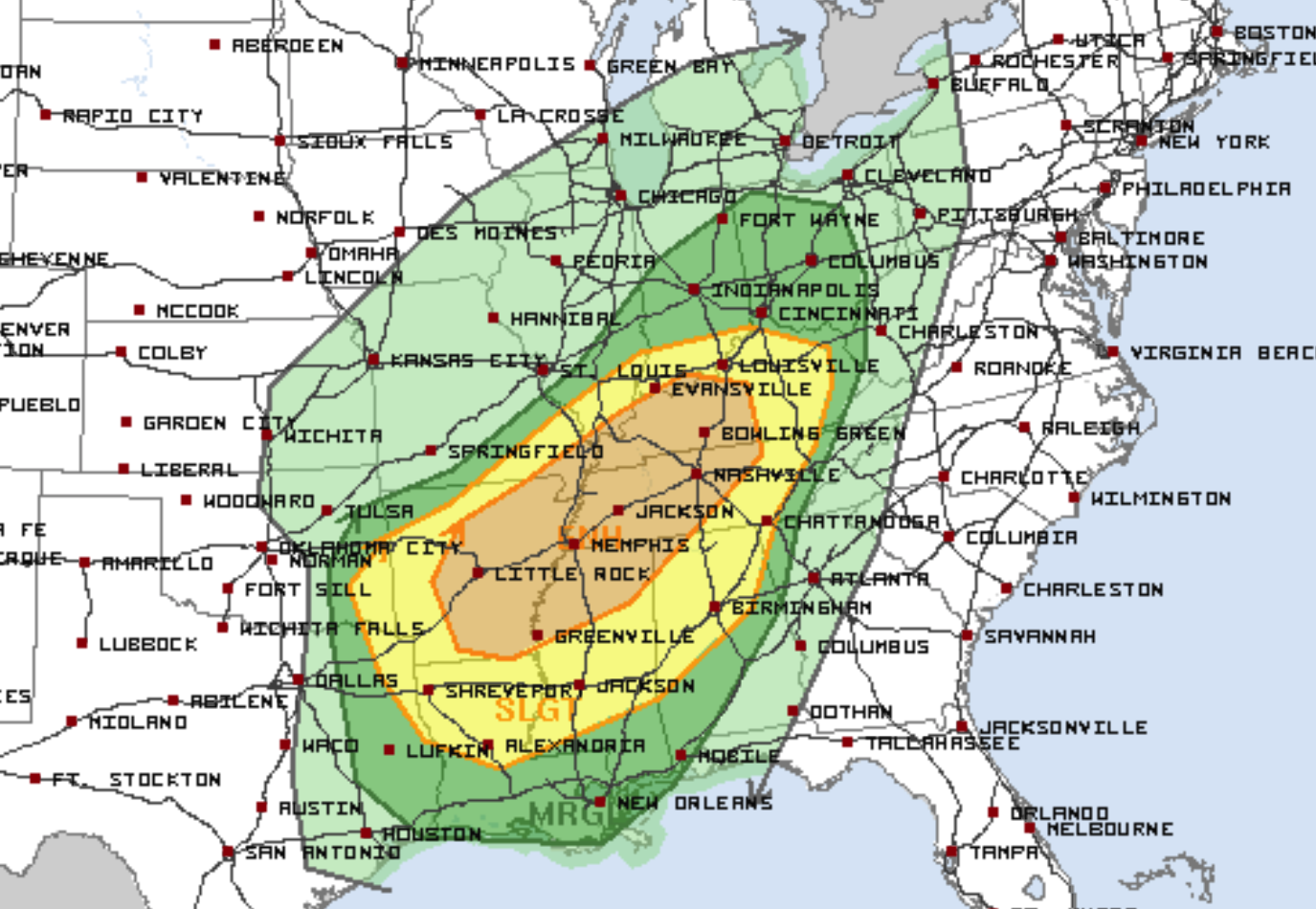 The image below is the probability of severe weather as it stand! 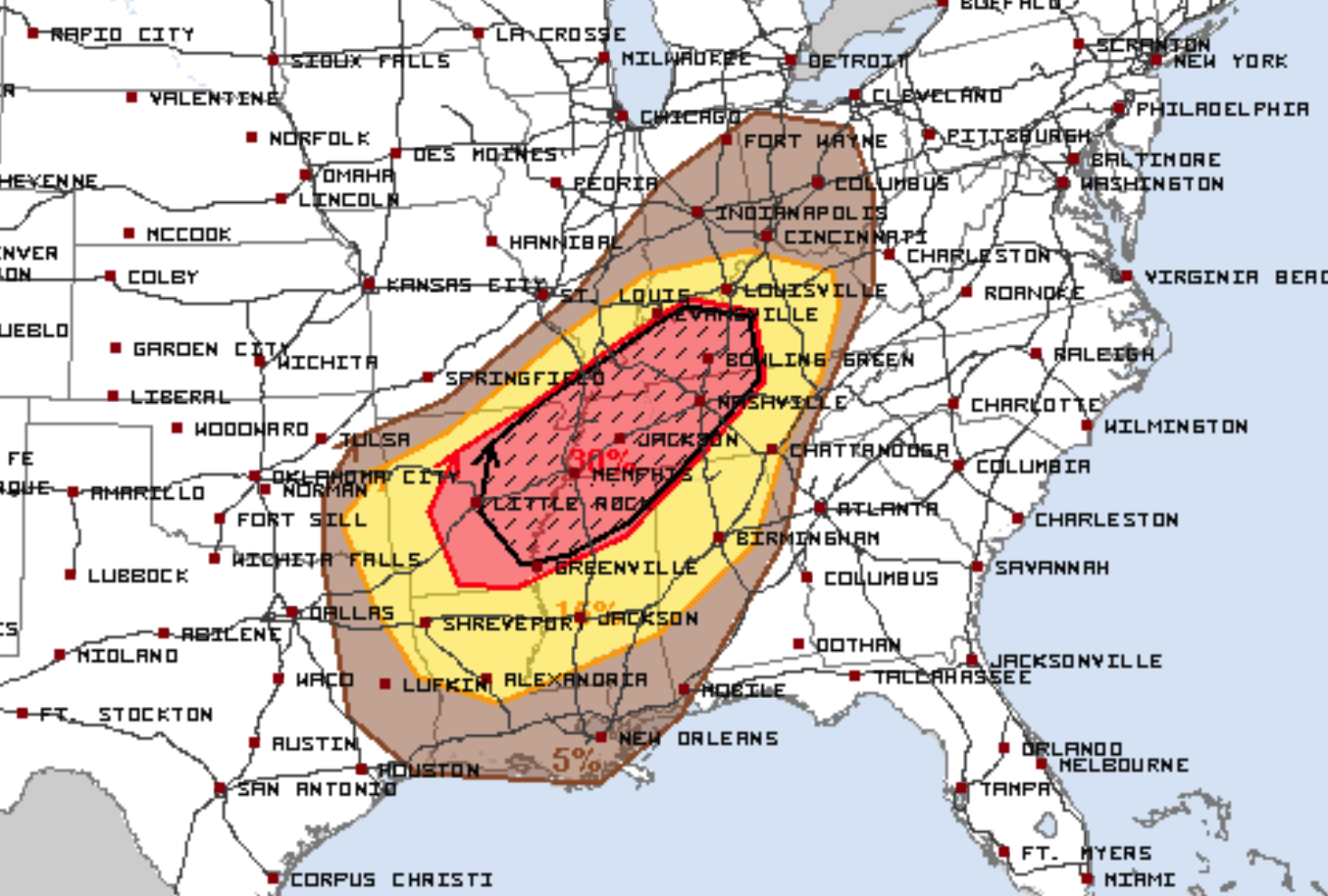 In phase with the subtropical westerlies, a vigorous short wave impulse of mid-latitude Pacific origins is forecast to accelerate northeast of the southern Plains through the Great Lakes region during this period. Strong cyclogenesis may already be underway by 12Z Saturday near the Texas/Oklahoma Panhandle vicinity, and models continue to indicate that the rapid evolution of a broad and deep cyclone will proceed northeastward into the Great Lakes region by the end of the period.

This likely will include the intensification of a cyclonic mid-level jet, including speeds in excess of 100 kt at 500 mb, across the southern Plains Red River Valley, through the middle Mississippi and Ohio Valleys. Across the evolving warm sector, models indicate that south/southwesterly winds will strengthen to 50-70+ kt through the 850-700 mb layer.

Although the warm frontal zone probably will surge north of the Ohio River, and into/through the lower Great Lakes region by late Saturday evening, an initial position roughly along the Ohio River west-southwestward into the Ozark Plateau may provide the main focus for severe thunderstorm potential.

Early period convection, associated with weak elevated destabilization above the front, may inhibit, or at least slow, boundary-layer destabilization to the north while leaving a remnant surface boundary.

In association with the onset of stronger surface pressure falls, surface dew points are expected to increase through the lower/mid-60s along and south of this boundary. Coupled with strengthening large-scale ascent, this is expected to contribute at least weak boundary-layer destabilization supportive of an evolving organized mesoscale convective system.

CAPE on the order of 500+ J/kg appears possible. Given the strength of the environmental wind fields (and shear) within the convective layer, the convective system may be accompanied by considerable potential for strong and damaging wind gusts.

It appears that this may initiate over parts of central and eastern Arkansas by midday, before progressing east-northeastward through the lower Ohio Valley by Saturday evening. A few tornadoes, some strong, are also possible, particularly with discrete supercells which may form near/just ahead of mainly the southern flank of the evolving system.

More discrete storms, including supercells, may eventually develop as far south as the lower Mississippi Valley through portions of the southern Appalachians by late Saturday night. 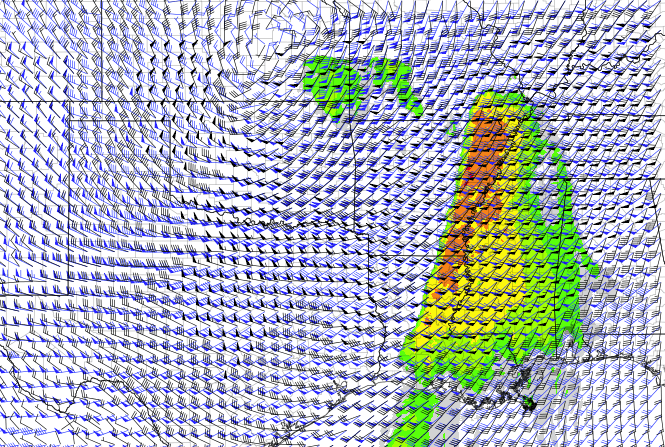 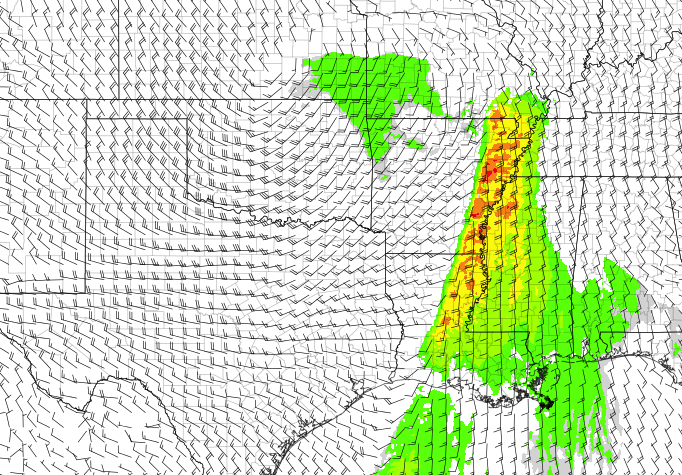 All weather hazards are likely with this severe weather side of this system!

We will have our team live with likely live coverage from several locations in the highlighted areas. This will be available on our website or our facebook page!

We can’t stress enough that now is the time to prepare. Not only because of this weather system but because storm season is fast approaching!