Significant tornado and wind damage event expected across parts of the lower to mid-Mississippi and Tennessee Valleys today.

Fast moving Tornadoes & Damaging winds are the main threats, but hail is also possible. Flooding is also a HUGE concern for this very same area.

Scattered severe thunderstorms are expected to develop today from the Arklatex region and lower to mid-Mississippi Valley eastward into the Tennessee and Ohio Valleys. Tornadoes, wind damage, and isolated large hail will be possible across much of the area.

At a Glance, the Storm Prediction Center has issued a MODERATE Risk! 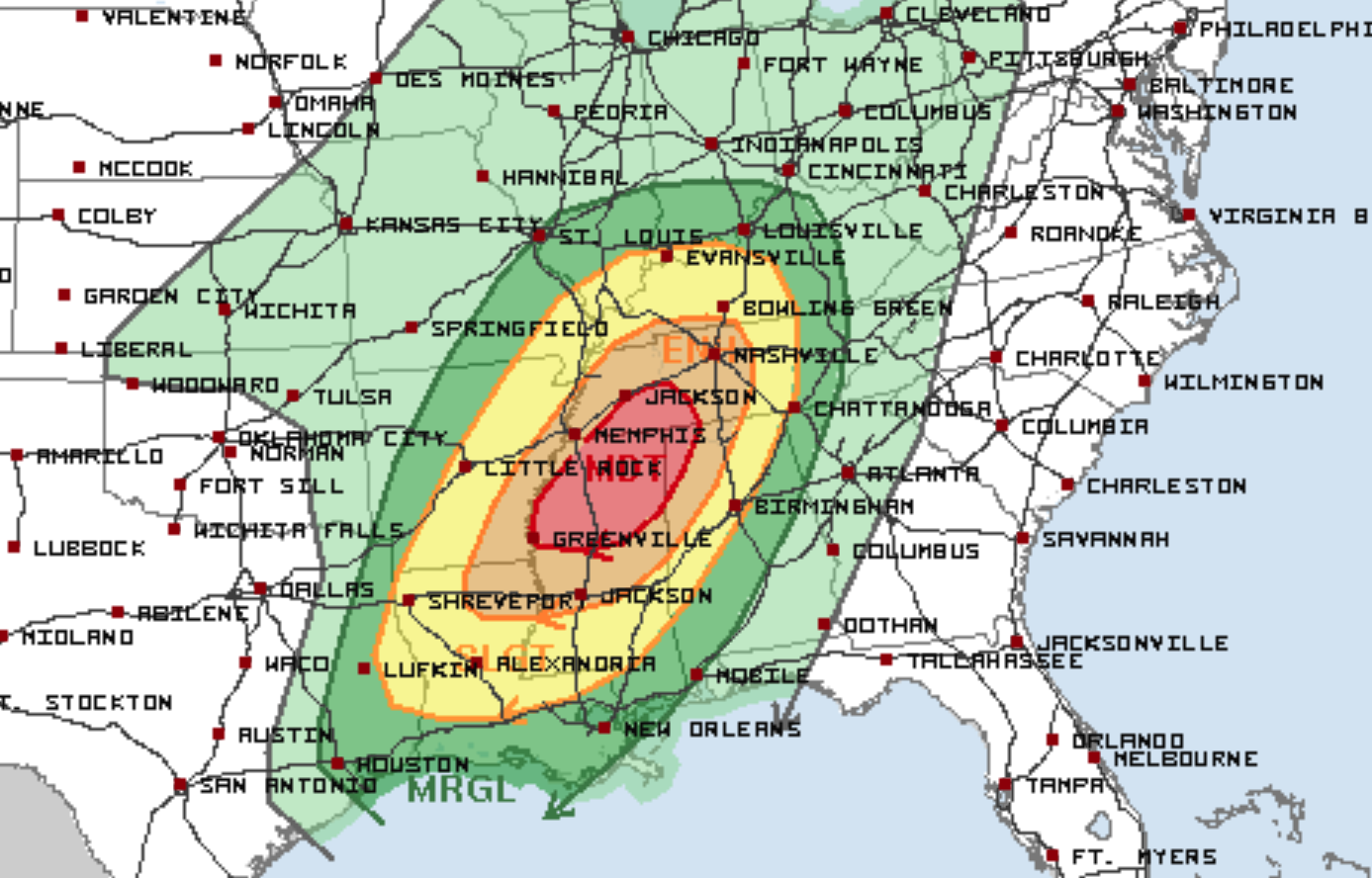 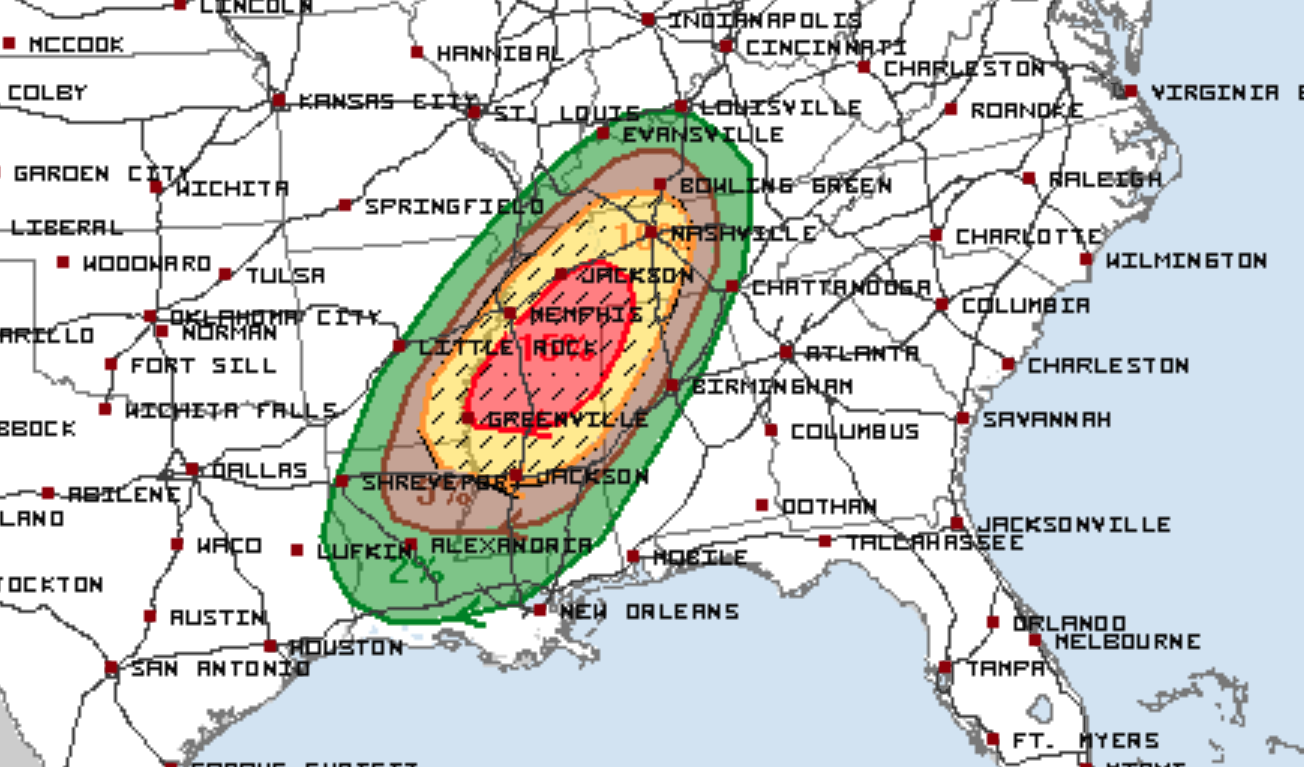 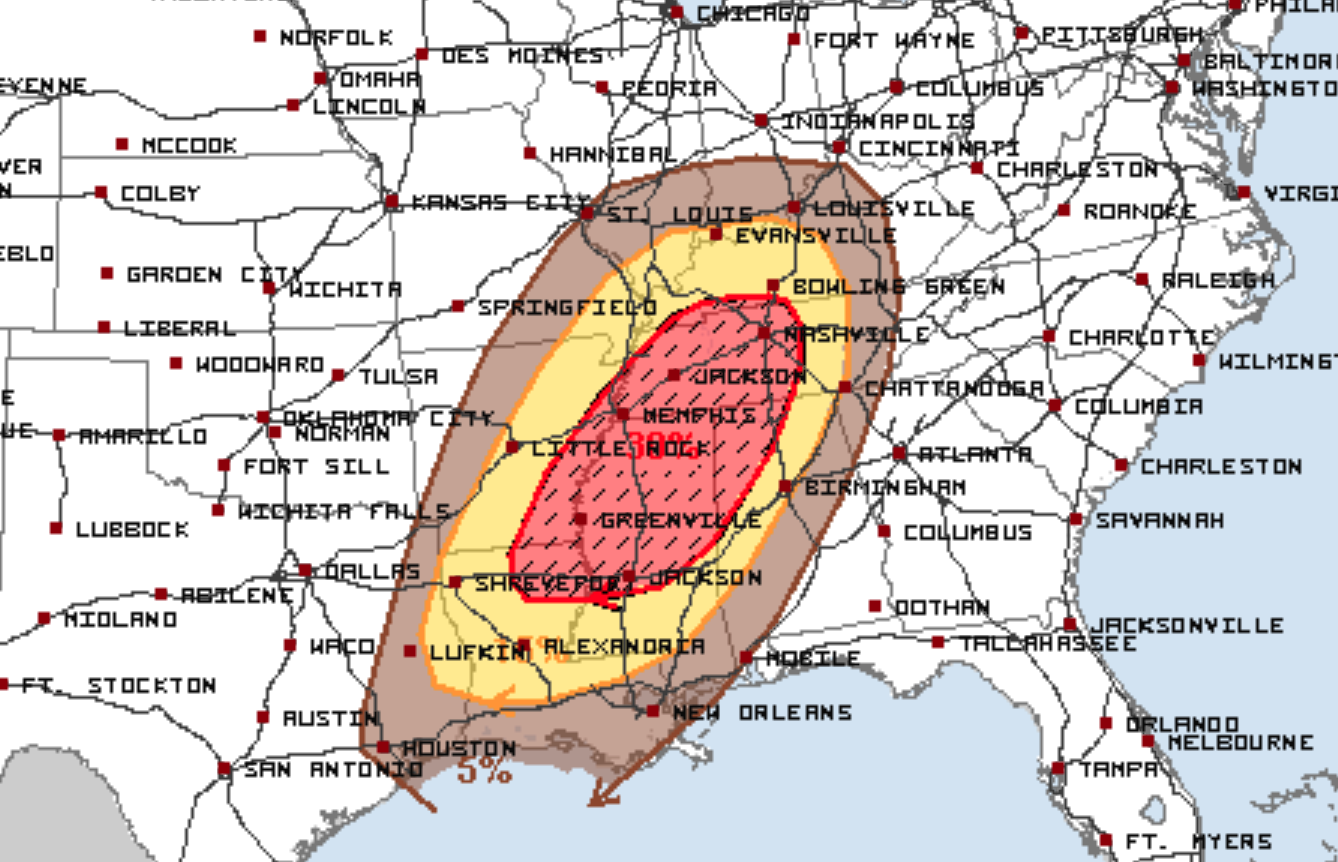 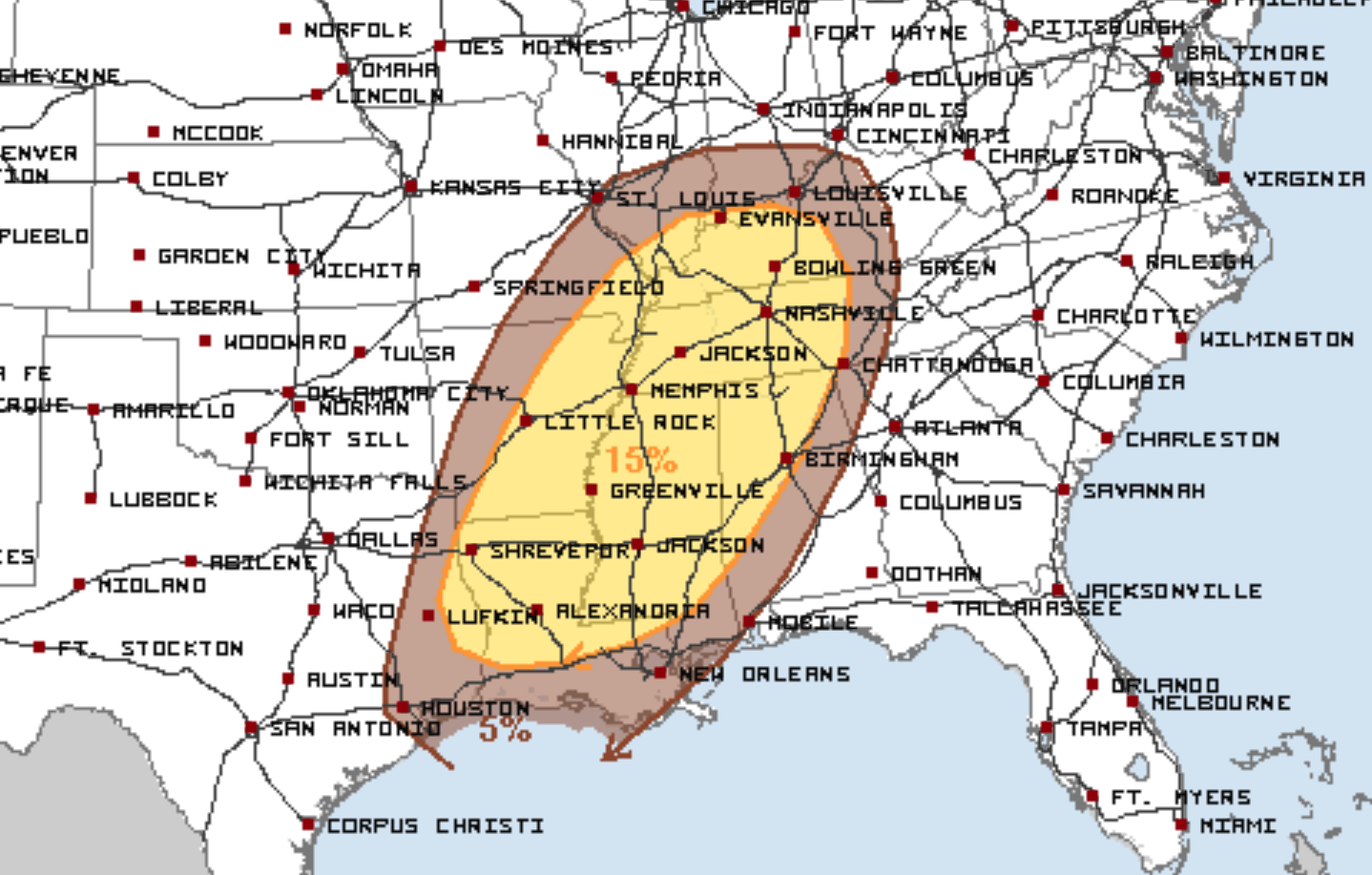 A well organized negatively-tilted upper-level trough will move across the southern Plains today as a 90 to 100 kt mid-level jet moves through the base of the trough. At the surface, a low will gradually deepen and move northeastward across the central Plains into the lower Missouri Valley. A surface trough is forecast to extend southward into the lower Mississippi Valley with a moist airmass located across the region. Surface dewpoints in the upper 60s and lower 70s F will overspread northern Louisiana, southeast Arkansas and most of Mississippi by midday. At the start of the period, a cluster of thunderstorms should be ongoing from northern Mississippi into western and middle Tennessee.

The stronger storms embedded in the cluster may have an isolated severe threat. This activity is forecast to move northeastward away the moderate risk area allowing for the moist sector to warm up late this morning. In response, a corridor of moderate instability is expected to be in place by midday from northeast Louisiana into far southeast Arkansas and western Tennessee. As large-scale ascent increases ahead of the southern Plains upper-level trough, thunderstorms are forecast to develop during the morning along the surface trough in the Arklatex with this convection moving northeastward into southeastern Arkansas by midday. More isolated thunderstorms will be possible across the moist sector from northern Louisiana into north-central Mississippi. During the early to mid afternoon, convective coverage should increase with scattered thunderstorms moving east-northeastward across the Enhanced and Moderate Risk areas.

RAP forecast soundings across the Moderate Risk area from north-central Mississippi into southwest Tennessee at 21Z show moderate instability and impressive kinematic profiles. MLCAPE is forecast to be from 1000 to 1200 J/kg with 0-6 km shear in the 50 to 55 kt range. This will support supercell formation with cells that remain discrete. In addition, hodographs are long and looped with 0-3 km storm relative helicity values in the 350 to 450 m2/s2 range.

This low-level shear environment will be favorable for tornadoes. A potential for long-track significant tornadoes will exist across the Moderate Risk area from late this morning through much of the afternoon. Wind damage and isolated large hail will also be possible with supercells. A squall-line is also expected to develop and move across the Enhanced and Moderate risk areas during the late afternoon and early evening. Wind damage, isolated large hail and a few tornadoes will also be possible with the stronger thunderstorms embedded in the line. This squall-line with wind damage potential should move across middle Tennessee and north-central Alabama during the evening.

Further north across the Ohio Valley, scattered thunderstorms are forecast to move northeastward into western Kentucky and southern Indiana during the afternoon. Forecast soundings at 21Z for Paducah show MLCAPE near 800 J/kg with 0-6 km shear of 65 kt. This combined with strong low-level shear will be sufficient for severe storms capable of producing tornadoes and wind damage. Most of the severe convection should remain south of the Ohio River. Due to the weaker instability in the Ohio Valley, severe coverage is expected to be less.

Flooding is a HUGE concern with much of the anticipated impact zone already flooded, near flood stage or ground nearly if not already saturated.

NOW IS THE TIME TOO BE PREPARED!

Please have your weather radios on, have a plan in place and pay close attention to local NWS warnings and instructions.

If you are in a flood zone that is to be impacted PLEASE pay close attention to local management and instructions if told to leave. Always remember to Turn Around, Don’t Drown & When Thunder Roars, Go Indoors!

Check out the ways you can support us here