A significant severe weather outbreak is possible for portions of the middle Mississippi Valley on Saturday.

The threats with the stronger storms include tornadoes, a few which may be significant, large to very large hail, and severe gusts. 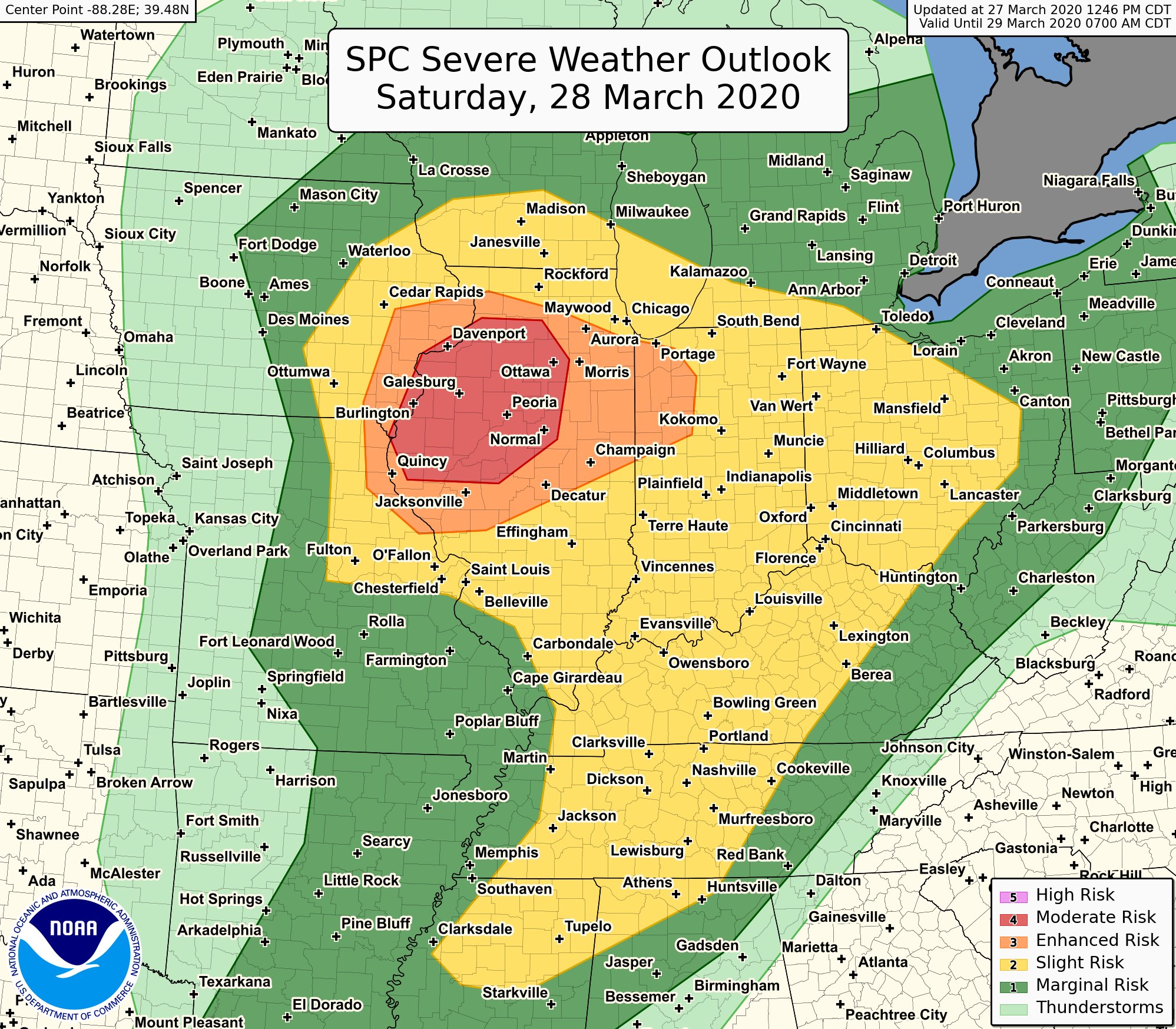 Anyone who lives within the risk area, particularly the red “moderate risk” area, including the cities of Peoria, IL and Davenport, IA, should pay particular attention to the weather tomorrow afternoon and evening.

On the UPDATED Severe Weather Outlook, a Moderate Risk continues to remain in place for what appears to be a high impact day 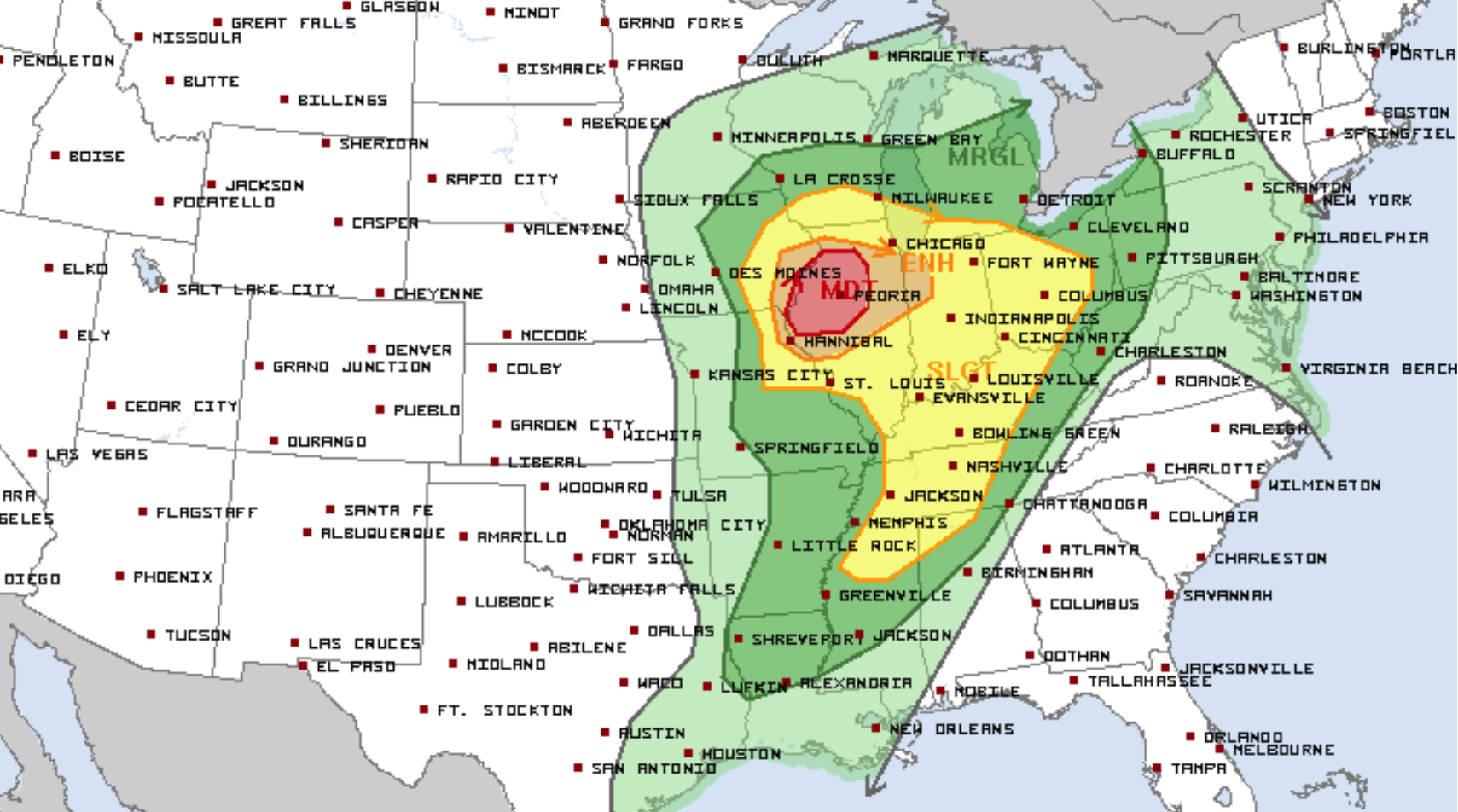 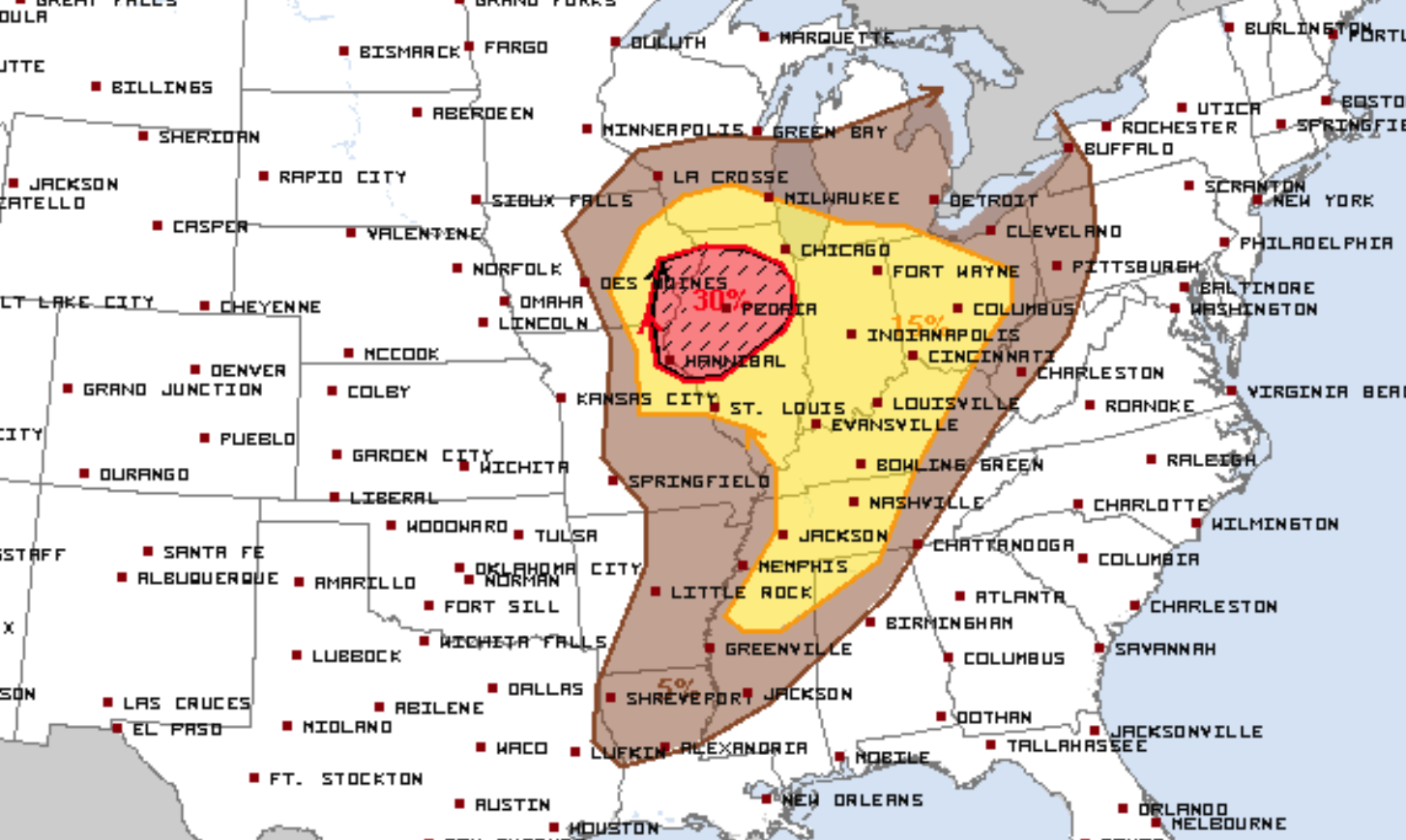 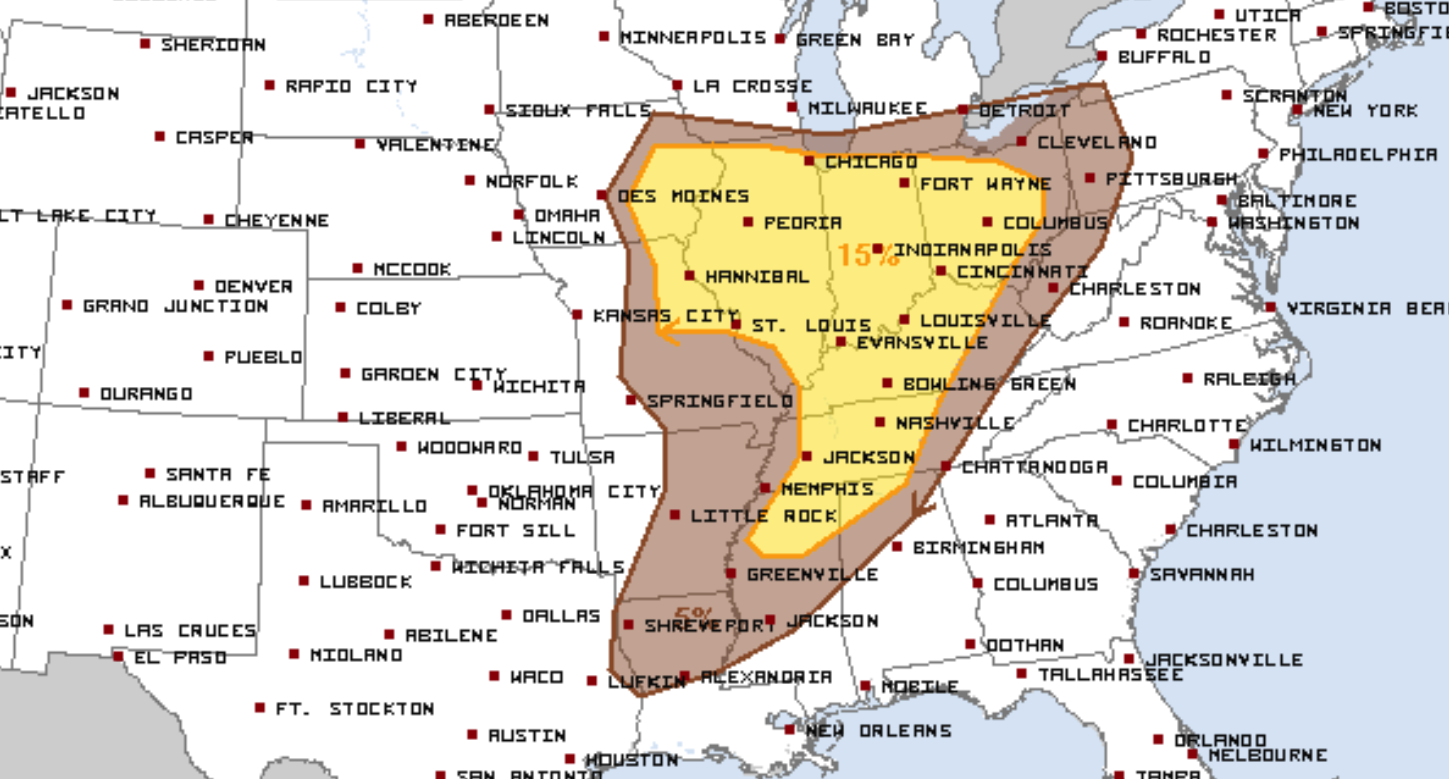 The most prominent feature within the upper flow pattern over the U.S. Saturday will be a strong short-wave trough shifitng northeastward across the Plains, and evolving into a compact closed low. This low should reside over the mid Missouri Valley during the afternoon, and then continue moving northeastward to a position over Wisconsin by the end of the period.

—Confidence is increasing for a potentially potent severe weather setup as ingredients needed for this are appearing to favorably align on Saturday.—

At the surface, a low initially over Kansas is expected to move steadily northeastward in conjunction with the evolving upper low — occluding as it does. The low should reside over Iowa by late afternoon/early evening, and northeastern Wisconsin by the end of the period.

A warm front extending east from the evolving low should reside over the Midwest through the daylight hours before advancing northward into the Great Lakes overnight, while a cold front shifts out of the Plains and across the Mid Mississippi Valley through late afternoon/early evening, and then the Ohio/Tennessee/lower Mississippi Valleys overnight.

A significant severe-weather event is expected across the northern Illinois area and portions of adjacent states — focusing during the afternoon and early evening hours.

A rapidly evolving environment will characterize the ENH and MDT risk areas — i.e. the Middle Mississippi Valley area — during the first half of the period, as the upper system closes off and the surface low deepens, and eventually occludes. Early-period convection across the risk area is forecast to shift northeastward and dissipate, allowing heating — in conjunction with rapid steepening of mid-level lapse rates — to yield moderate destabilization.

New storm development is forecast to occur during the mid afternoon time frame in the far eastern Iowa/far northeastern Missouri/northwestern Illinois area, and cellular mode is anticipated. Pronounced low-level veering in the wind field — particularly in the vicinity of the warm front over northern Illinois — is expected, with flow increasing to southwesterly at near 100kt at mid levels, as the upper system approaches.

The resulting shear will be strongly supportive of strong updraft rotation — and thus attendant risk for tornadoes, a few of which could be significant.

Peak tornado risk through late afternoon should begin to gradually diminish into the evening, as diurnal cooling begins. Still, severe risk — including potential for large hail with elevated storms north of the warm front — will likely continue through the evening before decreasing overnight.

…KY and TN southwestward to the Lower MS Valley area…

A band of showers and thunderstorms is progged to gradually evolve ahead of the advancing cold front — from far East Texas/northwestern Louisiana northeastward across the Mid Mississippi/Lower Ohio Valleys during the afternoon.

Despite modest low-level veering, deep-layer shear will support organized/rotating storms — with increasing risk with northward extent across the Tennessee Valley and into the Ohio Valley region through the afternoon/early evening.

Damaging winds and hail will likely be the primary risk, though a couple of tornadoes will be possible — particularly nearer the Ohio Valley. Risk should gradually diminish beginning in the evening and into the overnight hours. SPC, Goss.. 03/27/2020