Severe thunderstorms with tornadoes, large hail and wind damage are likely across parts of the mid-Mississippi, Ohio and Tennessee Valleys this afternoon and evening.

Isolated severe storms will also be possible in parts of the Arklatex and Ozarks. A few marginally severe storms could occur in the Desert Southwest. 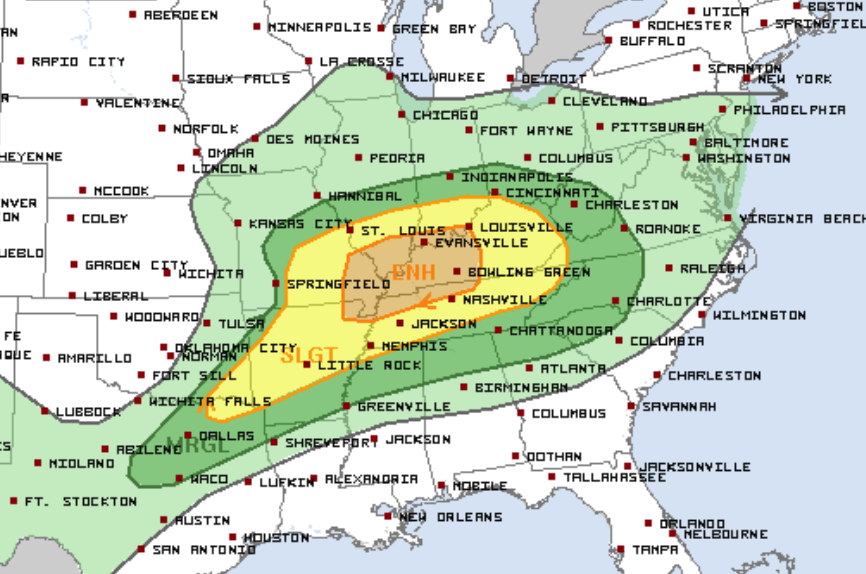 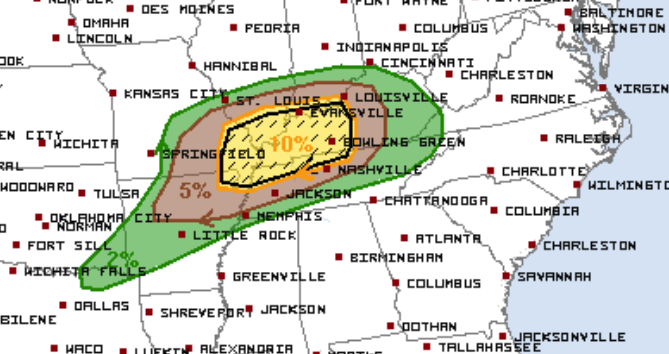 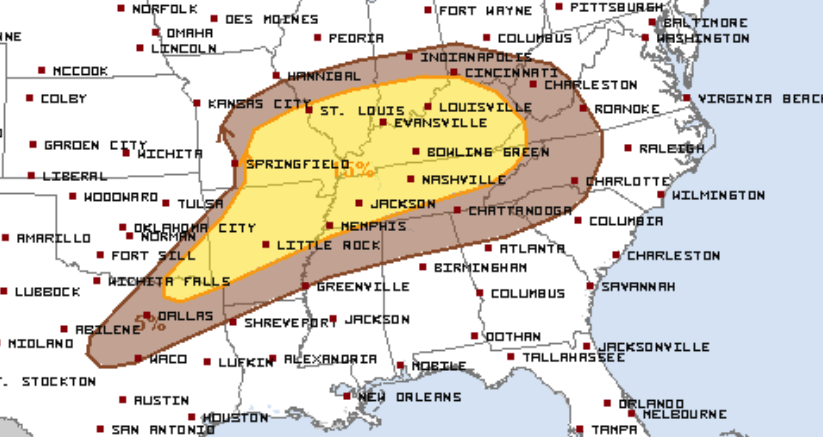 Live Storm Chasers’s team will be out in the field reporting so stay tuned to our Facebook Page and Online for more updates as this severe weather unfolds.

An upper-level trough will move eastward across the Great Plains today as a 75 to 100 kt mid-level jet moves across the central Plains and upper Mississippi Valley. A secondary 60 to 80 kt mid-level jet will move into the lower Ohio Valley. Increasing low-level moisture ahead of a cold front will result in surface dewpoints in the 60 to 65 F range from southeast Missouri and northeast Arkansas eastward across western Kentucky and Tennessee. This will lead to the development of an east to west corridor of instability by afternoon. Thunderstorms are forecast to first develop across south-central Missouri this morning and spread eastward into western Kentucky and northwest Tennessee by early to mid afternoon. The instability combined with strong deep-layer shear will be favorable for severe storms.

Concerning the finer-scale details, scattered thunderstorms should develop near a surface low in south-central Missouri around midday with this convection moving eastward across southern Illinois nad into western Kentucky early this afternoon. This activity should stay along and to the south of a warm front extending eastward from the surface low. Cells that can move into the air south of the warm front will likely be surface-based, and will have the greatest chance to become severe. Forecast soundings near Paducah this afternoon show MLCAPE near 750 J/kg and 0-6 km shear of 60-65 kt. Hodographs show strong speed shear in the lowest 1 km AGL with strong directional shear below 850 mb. This will be favorable for supercells and tornadoes. The tornado threat will likely be greatest in association with the 850 mb and 500 mb jet couplet. Storm relative helicities of 450 to 550 m2/s2 will support a threat for significant tornadoes as well. Supercells that move along and parallel to the warm front should have the greatest potential for tornadoes. A threat for large hail and wind damage will also be associated with supercells. A wind-damage threat will also be possible with bowing line segments.

Further southwest across the Arklatex and Ozarks, a cold front will advance southeastward this afternoon. Model forecast suggest that a pocket of instability will develop ahead of the front. Convection that initiates along and ahead of the front will move east-southeastward across the region. Surface dewpoints in the mid 60s F, MLCAPE of 500 to 750 J/kg and 0-6 km shear near 50 kt will likely support the development of isolated severe storms with potential for wind damage and hail.

An upper-level low will move slowly eastward off the coast of southern California. A 75 to 100 kt mid-level jet will move through the southeastern part of the system with the exit region affecting the Desert Southwest today. A surface low will deepen beneath the mid-level jet as a moist airmass with surface dewpoints in the 55 to 60 F range remains in place across southeast California and southwest Arizona. Surface heating will allow a pocket of instability to develop by afternoon with MLCAPE reaching 500 J/kg in many locations. As scattered thunderstorms develop this afternoon, the instability combined with moderate deep-layer shear should be sufficient for a marginal severe threat. Wind damage and hail will be possible with the stronger multicell clusters and short line-segments. ..Broyles/Wendt.. 03/12/2020