Damaging thunderstorm winds and tornadoes are possible across much of the Florida Peninsula today, and in eastern portions of the Carolinas late afternoon into tonight. 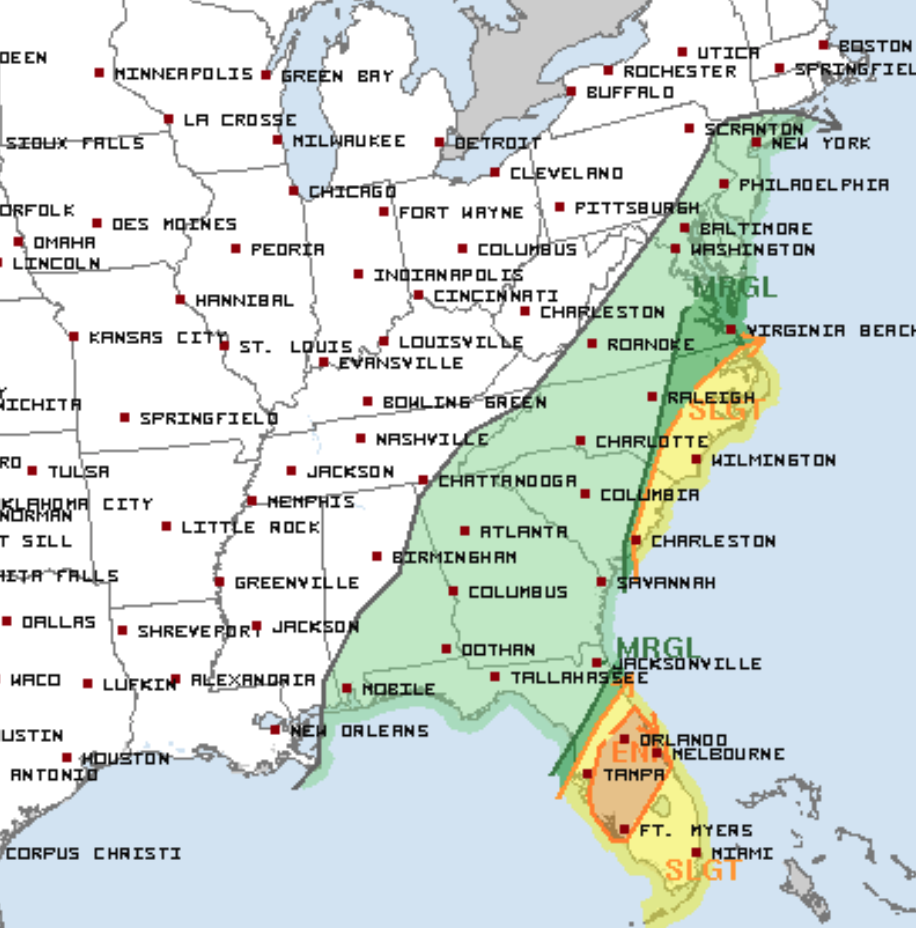 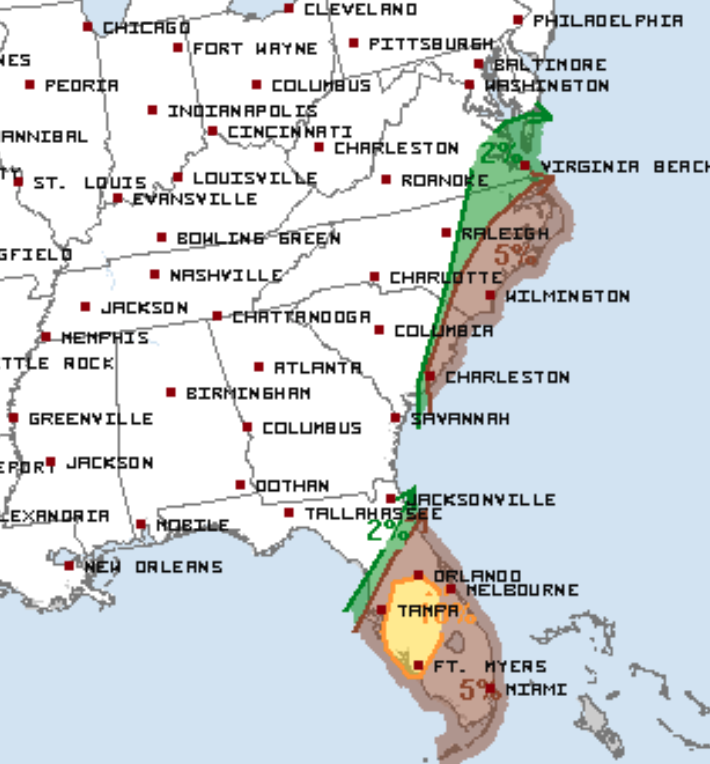 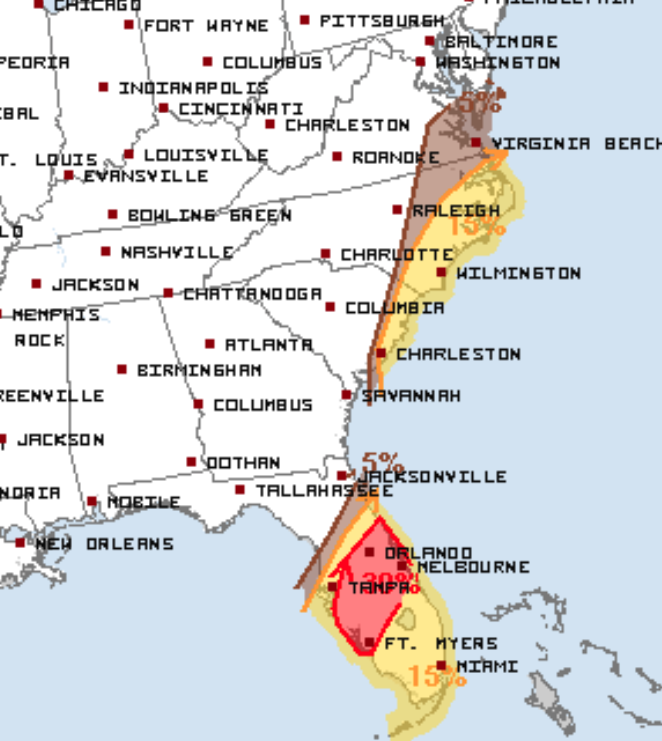 * Effective this Thursday morning and afternoon from 755 AM until – 400 PM EST.

Bands of thunderstorms should cross the watch area through mid-afternoon. This activity will offer sporadic tornado and damaging-wind threats in a favorable shear regime, as the inflow air mass gradually destabilizes. 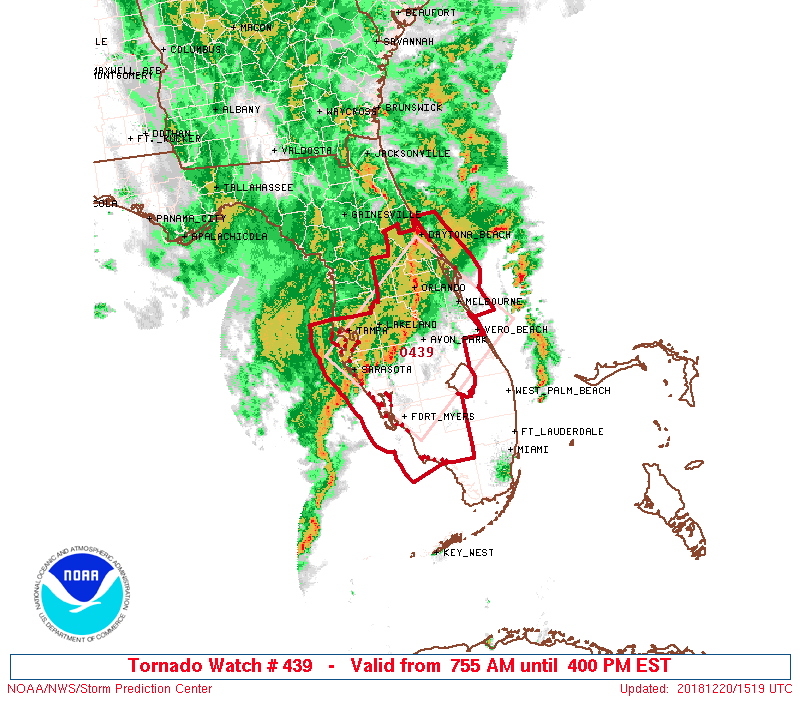 Scattered to numerous thunderstorms are expected to move northeastward across the outlook area through this evening in two primary bands:

1.  Morning activity now over the TBW/SRQ areas and extending southwestward across the Gulf.  A marginal tornado threat exists in the next hour or two with this activity as it moves inland.

2.  A longer band in both spatial length and timespan, expected to consolidate over the Gulf and west-central FL behind the morning convection and initially ahead of the front.  This evening and overnight, the front should catch up and cause some eastward acceleration of the resulting QLCS as a whole across the remainder of eastern/southern FL.

Following the morning activity, the main band should move into an increasingly high-thetae air mass over southwest, east-central and southeast FL.  Meanwhile, over central FL, this QLCS will have more limited recovery time with weaker buoyancy.  A moist, southerly Caribbean return-flow fetch will serve both to destabilize the boundary layer and keep winds backed enough to maintain favorably large low-level hodographs.  This is in notable contrast to many cool-season frontal-passage convective scenarios in FL, where surface flow substantially veers and reduces SRH/convergence. Instead, the general mass response to the low-latitude mid/upper processes will maintain a favorable CAPE/shear parameter spaces ahead of the line for bow/LEWP formations, embedded supercells and QLCS mesovortices, with associated tornadic and nontornadic wind potential.

A prefrontal band of strong-severe thunderstorms — at least loosely manifesting the northern extension of the FL activity — is expected to sweep north-northeastward across the Atlantic off GA and parts of SC, crossing coastal northeastern SC and eastern NC this evening into tonight.  Damaging winds are the main concern, and a tornado threat also exists.

Though the most-unstable boundary layer will remain over the Atlantic, partially modified marine air will spread somewhat inland across this region, amidst modest but sufficient lapse rates to support roughly 200-600 J/kg MLCAPE.  Though instability will be marginal, and diminishing with northward extent across eastern NC into VA, sufficiently intense deep-layer winds, and both flow and shear in the lowest few km above the surface, will support a 15%/slight-risk-level wind-damage threat wherever unstable surface-based parcels are present, and a marginal threat farther north into very shallow layers of weak near-surface static stability.

Stay Alert to local warnings and watches per NWS offices in your area.

Advised to also have your weather radios on!