A potential severe weather outbreak, including tornadoes, is possible early next week in the Lower Mississippi Valley, Southeast and possibly into the mid-Atlantic as an area of low pressure strengthens in the Midwest. 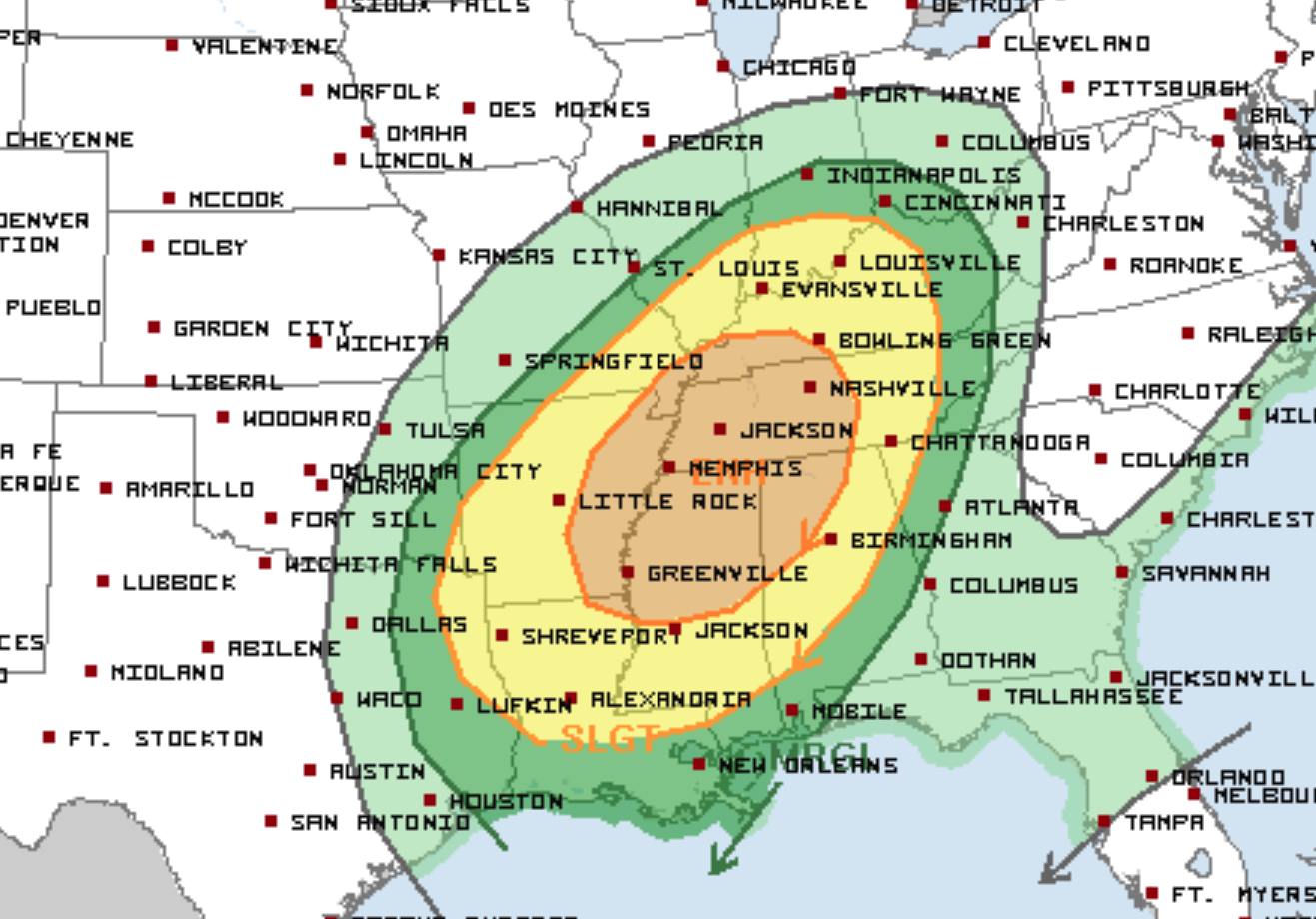 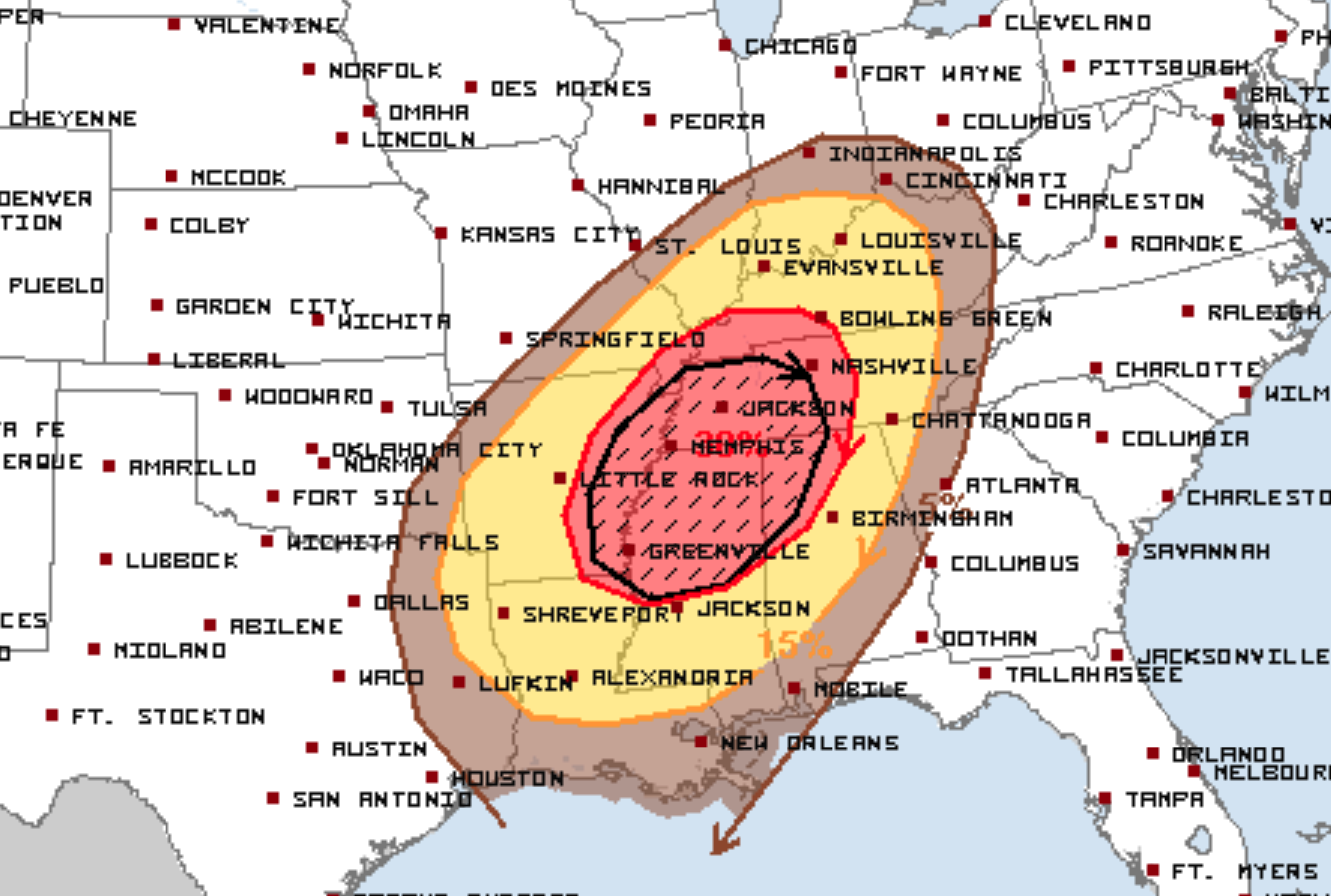 Numerous severe storms with the potential for damaging wind and tornadoes are expected Monday evening into the overnight from a portion of the lower Mississippi Valley into the Tennessee and Ohio Valleys.

Potential still exists for significant severe weather to transpire Monday evening and overnight, mainly from the lower MS Valley into the Tennessee Valley regions. Though the NAM and GFS are slightly less amplified with approaching upper trough compared to the ECMWF, models have demonstrated reasonably good consistency. Cyclogenesis should commence by Monday evening over the lower MS Valley in response to ascent within exit region of an approaching, intense jet streak within base of an amplifying shortwave trough. The low is forecast to deepen as it lifts northeast into the OH Valley overnight with trailing cold front advancing through the TN and lower MS valley regions. Richer low-level moisture residing over the northern Gulf will advect rapidly northward through the warm sector in response to the strengthening low-level jet, contributing to destabilization with modest instability (1000-1500 J/kg MLCAPE). Mixed storm modes including a squall line and supercells are likely to develop along and ahead of advancing cold front Monday afternoon initially over the lower MS Valley, and continuing east into the TN Valley and Southeast States Monday night. Impressive wind profiles with large hodographs and an intense upper jet will promote a threat for mainly damaging wind and tornadoes, though some hail will also be possible. 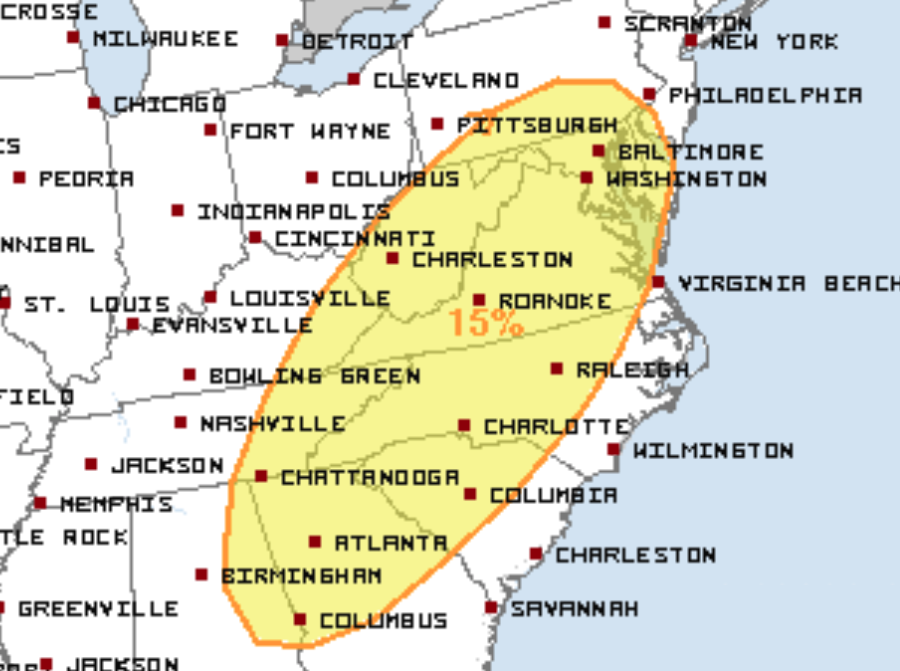 Some threat for severe storms should persist into Tuesday (day 4), mainly from a portion of the Southeast States into the Middle Atlantic. Showers and thunderstorms will be ongoing along and just ahead of the cold front from the OH Valley into the Gulf Coast states. Surface low will shift from the OH Valley into the lower Great Lakes as the attendant shortwave trough continues northeast. Vertical wind profiles will support organized convection along the cold front. However, widespread clouds and more limited moisture return should result in weak instability, especially with northward extent into the Middle Atlantic where the strongest kinematic environment will evolve. Nevertheless, at least some threat for damaging wind and perhaps a couple of tornadoes will exist during the day.