Severe weather threat slowly increasing for the end of this week!

We are looking at our first widespread severe weather likely to develop by the end of the week Saturday, (Feb 23, 2019) across Dixie Alley.

The Storm Prediction Center has already made mention of this in their D6 outlook! 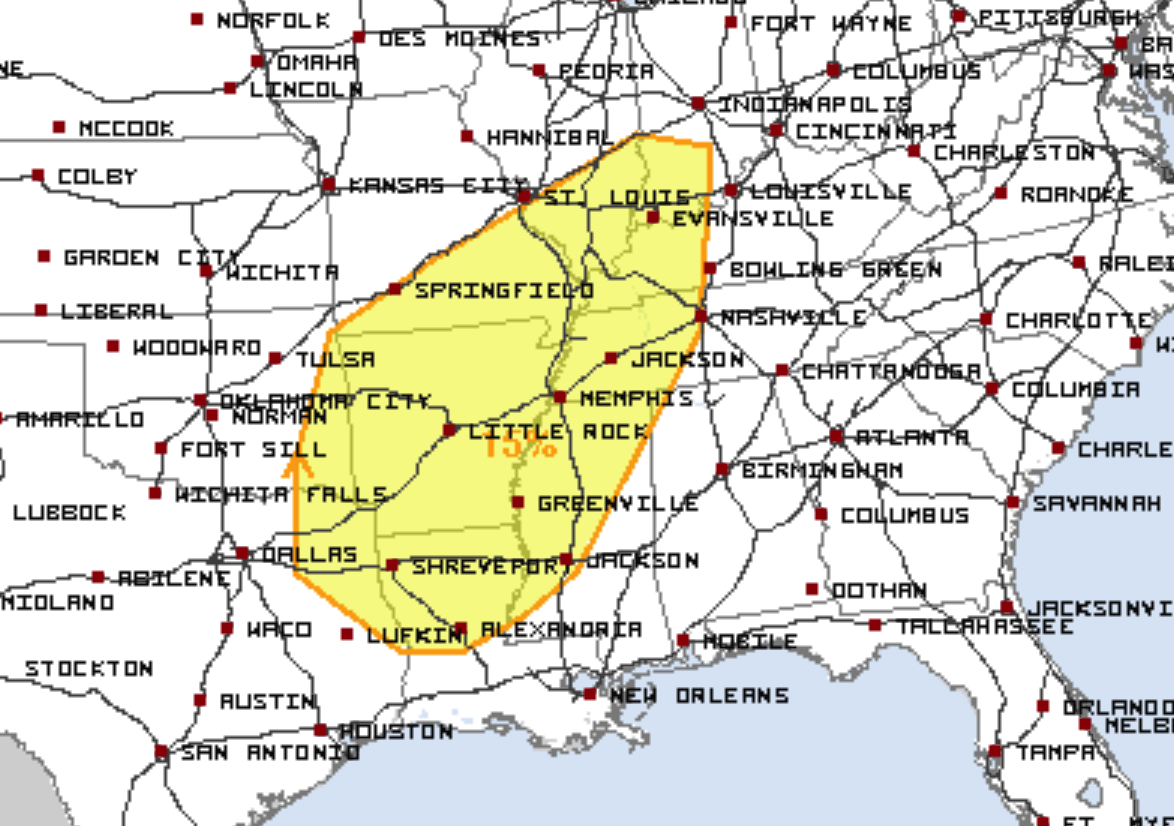 Models continue to indicate that blocking will remain prominent within the mid-latitude westerlies across the northeastern Pacific through this period.

Downstream, it appears that flow may transition to a broadly confluent regime across the Pacific coast, Rockies, and Plains, and a less amplified regime in general across the southern tier of the U.S., by late next weekend into early next week. As this takes place, one more vigorous short wave impulse is forecast accelerate east-northeastward out of the Southwest.

There appears increasing consensus, within and among the various model output, that this feature will provide support for strong surface cyclogenesis to the lee of the southern Rockies by this weekend.

Guidance generally indicates that the cyclone center will rapidly migrate from the Texas/Oklahoma Panhandle region into the Great Lakes on Saturday. This probably will include intensifying lower/mid tropospheric flow (to 50-70 kt in the 850-500 mb layer) across an evolving warm sector boundary layer that will become at least weakly unstable, across lower portions of the southern Plains through the mid to lower Mississippi Valley region.

This environment may become conducive to the evolution of an organized mesoscale convective system, and perhaps discrete supercell development ahead of it, accompanied by the risk for damaging wind gusts and tornadoes.

Heavy rain is expected in parts of the south and Ohio valley through this weekend. Flash flooding and river flooding will likely develop as the ground in much of the are is already saturated.

Multiple rounds of rain will soak the South and Ohio Valley into this weekend, raising the threat of more flooding in what has already been a soaked late-fall and winter.

The heaviest rain from this setup will develop across parts of the South and Ohio Valley starting Tuesday and Wednesday. Additional bouts of soaking rain could impact those regions late this week into the weekend.

Widespread rainfall totals of 3 to 5 inches are likely in the above-mentioned locations. Localized totals of up to 10 inches are not out of the question by this weekend.

Flash flooding and river flooding will likely develop where the heaviest rain sets up.

Some river gauges in the lower Ohio Valley and mid-Mississippi Valley are already in minor or moderate flood from heavy rain earlier this month.

As always, if you are in an automobile and encounter a flooded roadway, do not attempt to drive through floodwaters. If you live a flood-prone location, be sure to stay informed this week on the impacts from any rising rivers or streams.