Severe thunderstorms with very large hail and damaging wind gusts are expected from the Texas Hill Country into south and southeast Texas this afternoon into tonight.

Damaging wind gusts may also occur this afternoon along the Interstate 95 corridor, generally from near Washington D.C. to the New York City area. 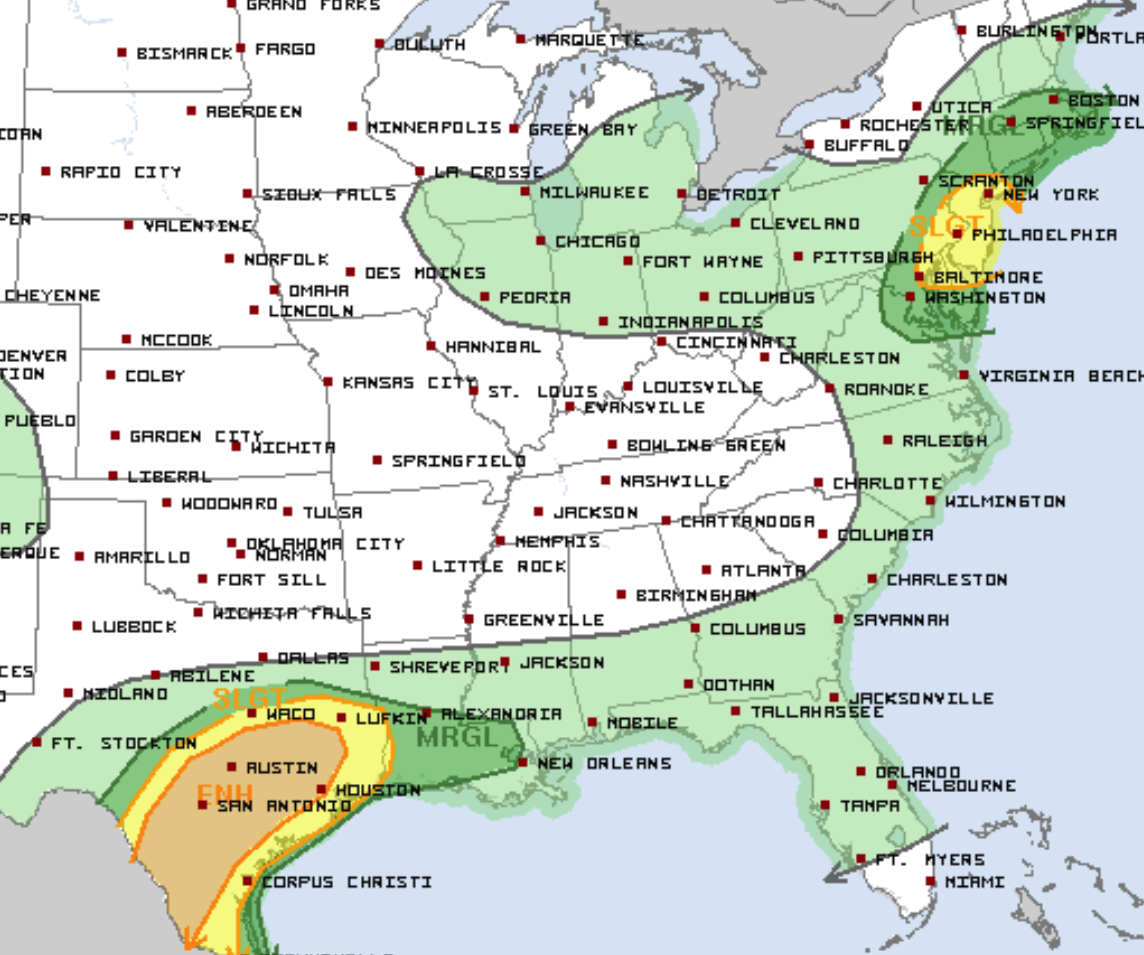 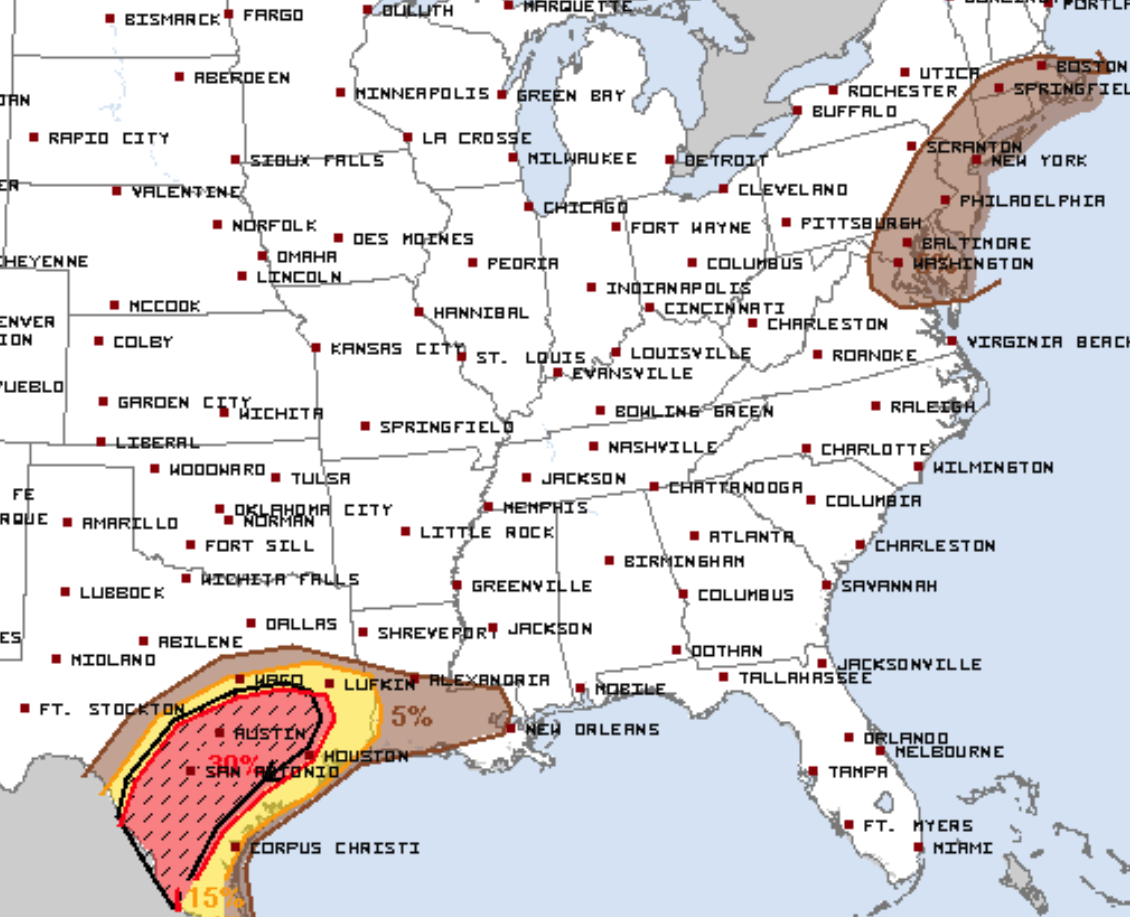 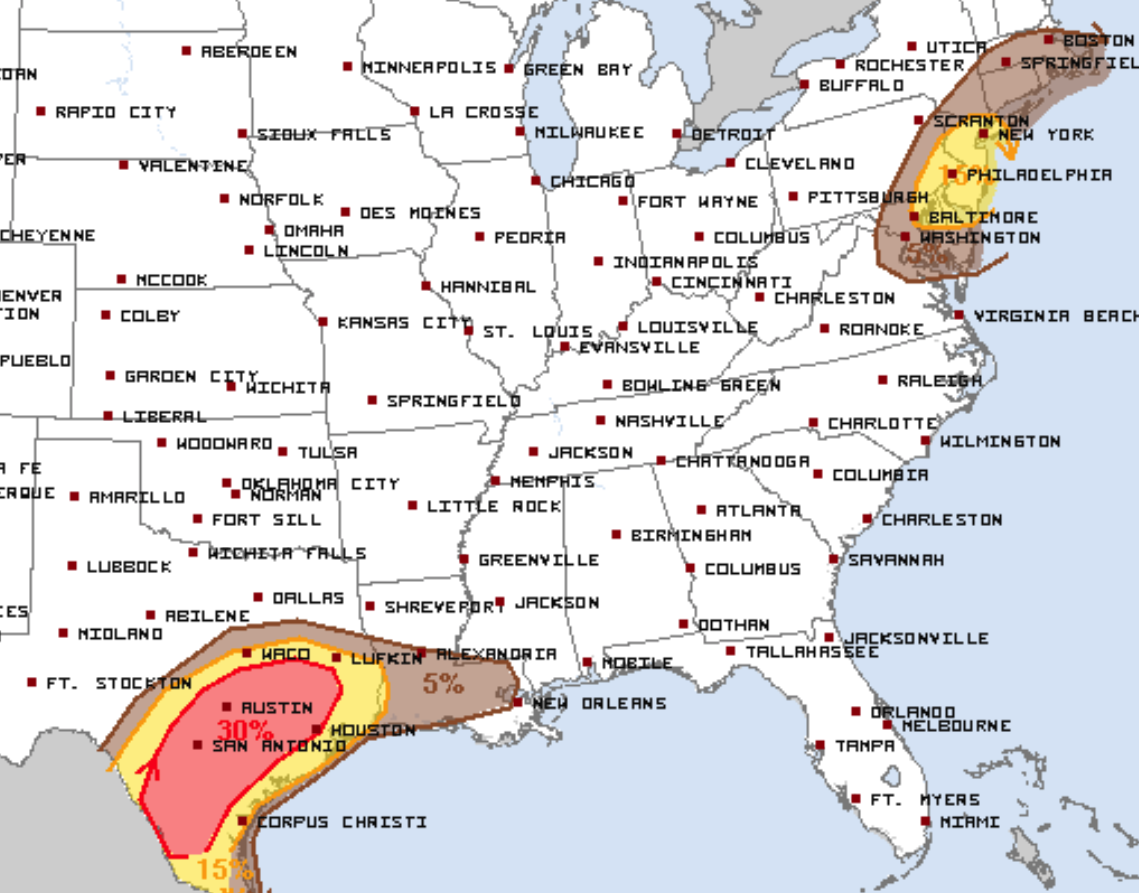 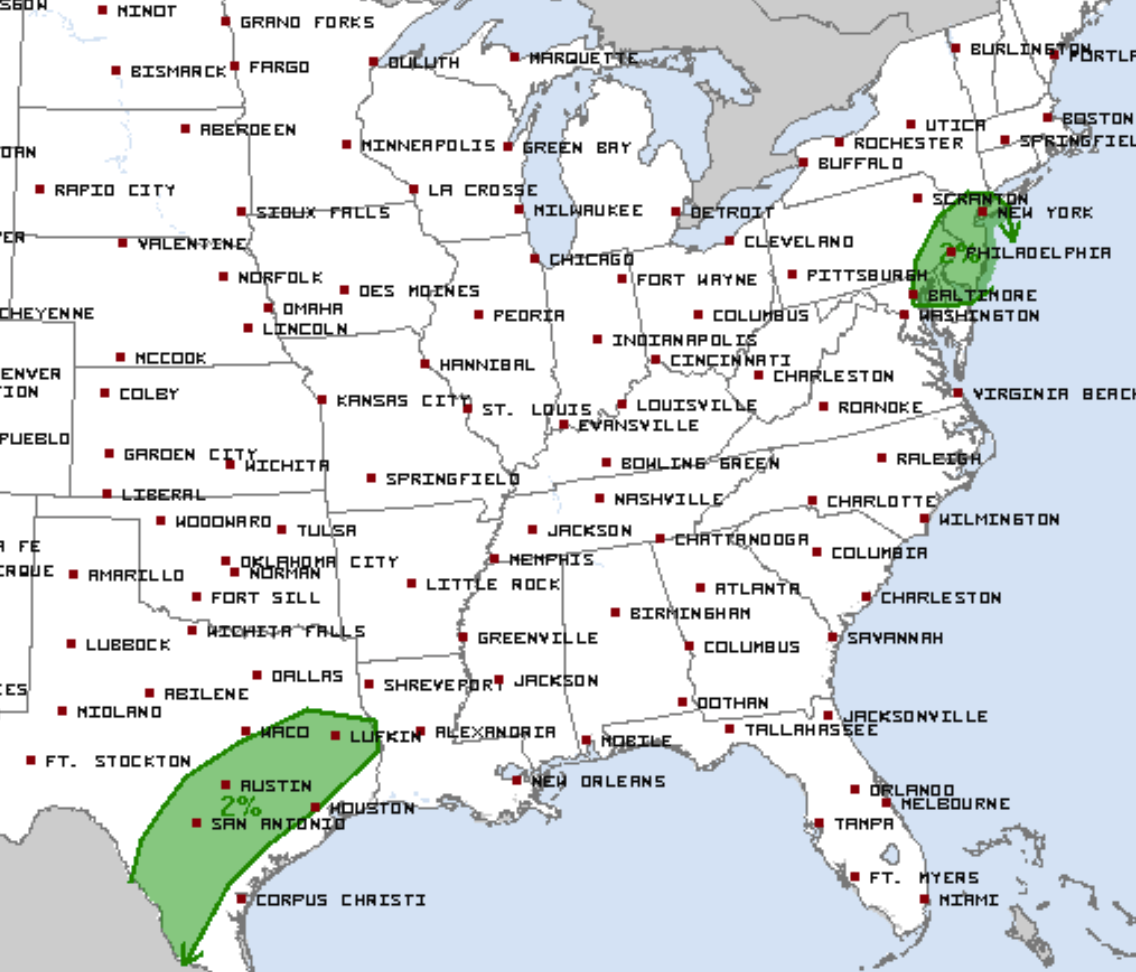 In the wake of an MCS/MCV that exited the coast earlier this morning, clearing continues to occur at midday in vicinity of the I-95 corridor/coastal areas from eastern Virginia/Delmarva Peninsula northward into New Jersey and eastern Pennsylvania just ahead of an east/southeastward-moving cold front.

This clearing has allowed for moderate heating/eroding inhibition within a modestly moist air mass (dewpoints generally in the 50s F). While convergence is not strong (reference veering pre-frontal winds) and destabilization will be weak overall, there will be a short-term deepening/intensification of low-topped convection, prior to the cold front exiting the coast later this afternoon. Locally damaging winds are the primary concern.

Forecast scenario remains on track for later this afternoon/evening. A surface cold front will slow and stall this afternoon from central into northeast Texas, before accelerating southward tonight. A southern-stream shortwave trough/associated speed max over West Texas late this morning will reach east-central Texas by early evening. Near/south of the front, surface heating and boundary-layer dewpoints in the low-mid 70s will begin to erode convective inhibition by mid-afternoon.

Storm development is expected by mid-afternoon along the boundary generally near I-35, at which time MLCAPE is likely to have increased into the 3000-4000 J/kg range. Though low-level flow/shear will remain weak, deep-layer shear will be favorable for supercells, and storm interactions will likely lead to some upscale growth by this evening.

The more discrete supercells will pose a threat for isolated very large hail, while damaging winds can be expected with the storm mergers and upscale growth into east/southeastward-moving clusters. These convective clusters will likely reach southeast Texas and the middle-upper Texas coastal plain by evening.

The threat for isolated severe storms could linger into the overnight hours across deep South Texas, as storms cross the Rio Grande from northeast Mexico.

As the amplifying, northern-stream trough moves over the Great Lakes/Ohio Valley today, lapse rates below the 600 mb level will steepen with cold temperatures aloft and surface heating/mixing.

Despite very marginal low-level moisture (boundary-layer dewpoints dropping into the 20s F), the steep lapse rates will allow SBCAPE of 100-200 J/kg this afternoon from WI across northern IL to Lower MI, on the cyclonic side of the mid-upper jet.

Scattered, low-topped storms are expected with daytime heating and with buoyancy profiles extending to at least -25 C near the equilibrium level. Some graupel will be possible given the cold temperature profiles, as well as gusty outflow winds with inverted-v profiles in the low levels. SPC/Storm Prediction Center: Guyer/Moore.. 04/09/2020