However, the big show is tomorrow with already an enhanced risk for severe weather including Tornadoes and Damaging wind where last weeks deadly storms wreaked havoc across the south. (READ MORE) 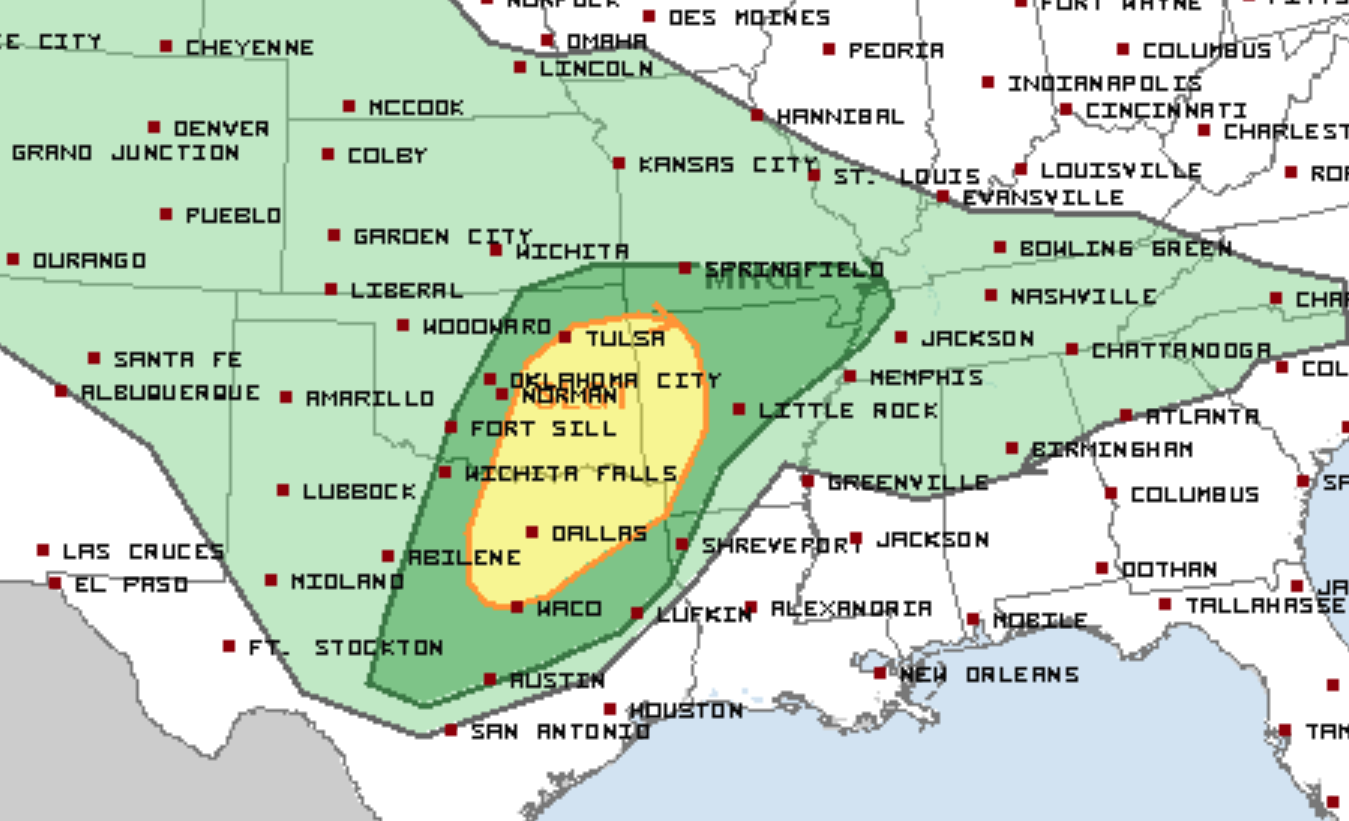 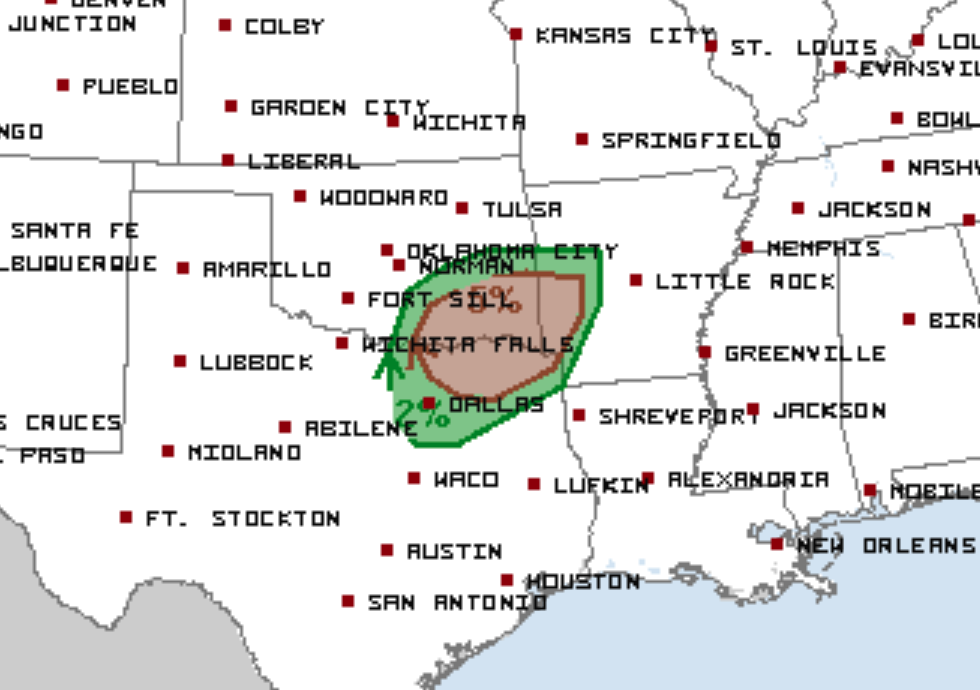 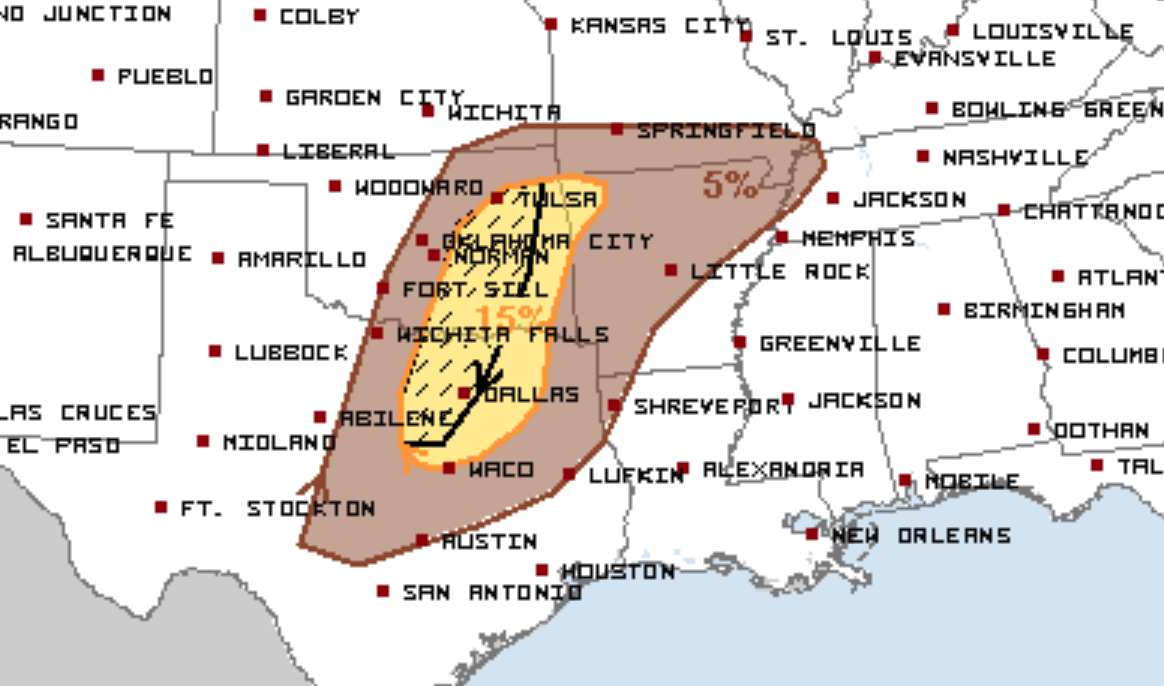 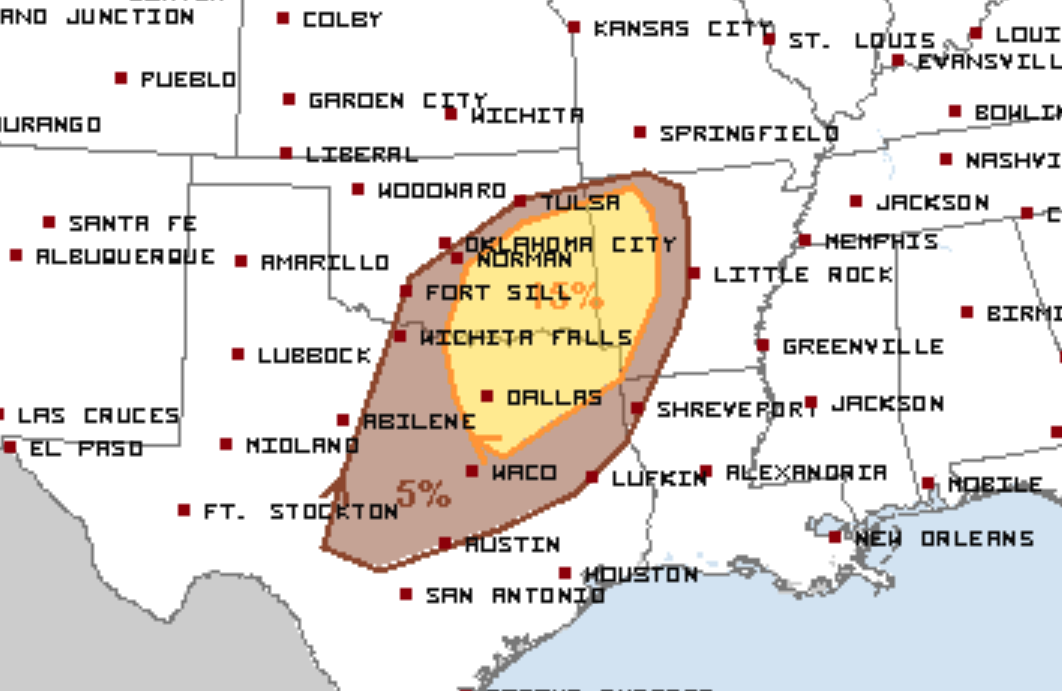 In mid/upper levels, a nearly zonal pattern will prevail over most of the CONUS. The major perturbation relevant to this forecast is a currently positively tilted trough — now evident in moisture- channel imagery from western NV southwestward across central CA to Pacific waters well west of northern Baja. The basal vorticity lobe will pivot eastward faster than the remainder of the perturbation. This gradually will change the overall tilt to neutral over the southern Rockies and NM around 06Z, and negative from the central High Plains to western OK and northwest TX by the end of the period.

The low-level response will include strengthening warm advection across a broad swath of the south-central CONUS and southern Plains, and intensifying lee troughing just east of the central/southern Rockies. A Pacific cold front will emerge from the southern Rockies after 00Z and move eastward, overtaking a dryline that is becoming better-defined currently from the DRT area to parts of north-central TX.

11Z surface analysis showed an elongated area of low pressure along a quasistationary to slowly moving warm frontal zone, from the Red River near PRX west-southwestward to north of DYS. The quasistationary front extended from there northwestward to another low near LVS.

The eastern part of the warm frontal zone was in two segments, one over southeastern OK and south-central AR, the other over northeast TX — each expected to consolidate gradually into one front over the southeastern OK/southern AR region today.

This boundary will linger over the southern AR and TX/OK Red River regions through evening, then shift northward as a warm front over at least parts of southern/eastern OK, prior to being overtaken by the surging Pacific front/dryline late tonight. The cold front should reach central OK and north-central through southwest TX by 12Z. During the 06-12Z time frame, the associated surface cyclone should develop out of the CO lee trough and move eastward to near the central portion of the KS/NE state line.

Scattered thunderstorms in at least a couple of bands or clusters should form beginning late this evening along/ahead of the Pacific front and dryline, within the corridor between central TX and southwestern/central OK. This activity should move northeastward to east-northeastward while backbuilding somewhat, growing upscale, and aggregating into at least a broken line of strong-severe convection during the 06-12Z time frame. By the end of the period, activity should extend from southern MO across western AR, southeastern OK to parts of northeast to east-central TX. This convection will continue into the day-2 period as at least the first phase of an enhanced risk over parts of the Mid-South region.

This evening and overnight, inflow parcels will transition from being elevated in the Ozarks region to surface based across at least central TX to southeastern OK. The demarcation from surface-based to elevated should evolve northward to be near the warm-frontal zone, as higher-theta-e return-flow air advects into the region overnight. The poleward location of that transition will be crucial to the northern extent of the SLGT/15%-level wind threat and 5% tornado threat, as will how quickly the mode evolves from discrete to quasi-linear. As such, these probability lines could be rather fluid through succeeding updates, as mesoscale trends and shorter-fused progs warrant

In general, the environment will be characterized by a gradual increase in surface theta-e from the warm frontal zone to central/ south TX. Surface dew points in the 60s F already are analyzed as far north as around PRX, and should become more widespread across the preconvective moist sector through the period, while overall PW increases. Meanwhile, strengthening deep shear and large-scale ascent aloft will occur rapidly after 00Z with the quick approach of the mid/upper trough, substantially decreasing what had been strong MLCINH and boosting the severe-favorable parameter space. A corridor of 500-1000 J/kg MLCAPE, juxtaposed with 45-60-kt effective-shear magnitudes and enlarging low-level hodographs supporting supercell and QLCS-embedded circulation potential, should develop ahead of the overnight convection from central TX into southeastern OK.

Elevated storms further north — roughly from about I-40 into the western Ozarks — will be in an environment of favorably steep midlevel lapse rates and 1000-2000 J/kg MUCAPE supporting large (perhaps significant) hail threat, and isolated severe gusts penetrating the shallow-sloped/near-surface stable layer cannot be ruled out.