Severe Weather forecasted today with Damaging wind gusts and a few Tornadoes being the primary threat!

Severe thunderstorms are expected today and tonight across portions of the Lower Mississippi Valley and Southeast, with damaging wind gusts and a few tornadoes.

Effective this Wednesday morning and evening from 1150 AM until 600 PM CST.

*A few Tornadoes likely with a Couple Intense Tornadoes Possible

Thunderstorms are expected to continue to develop over central Louisiana this afternoon and spread northeastward across the watch area.

A few supercell storms are possible, capable of damaging winds and tornadoes. 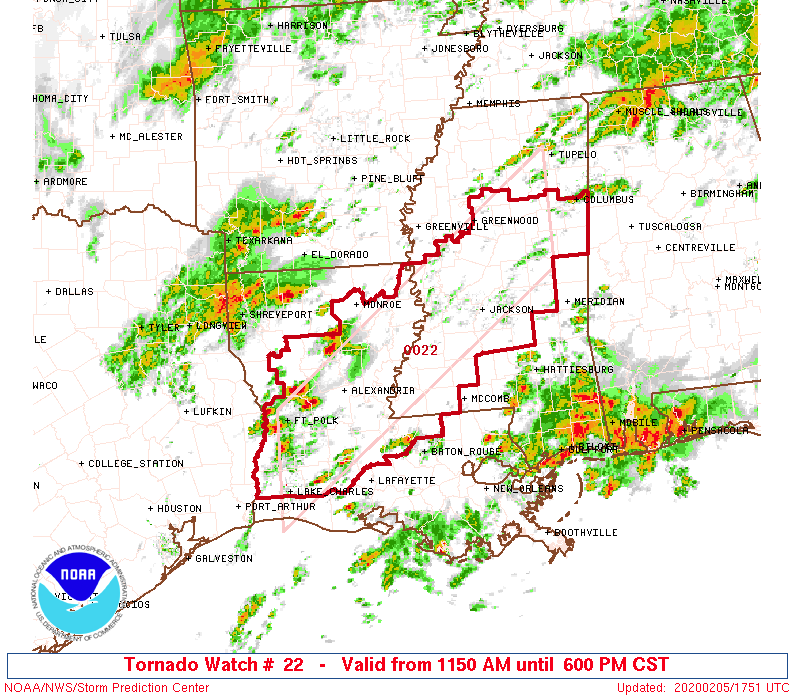 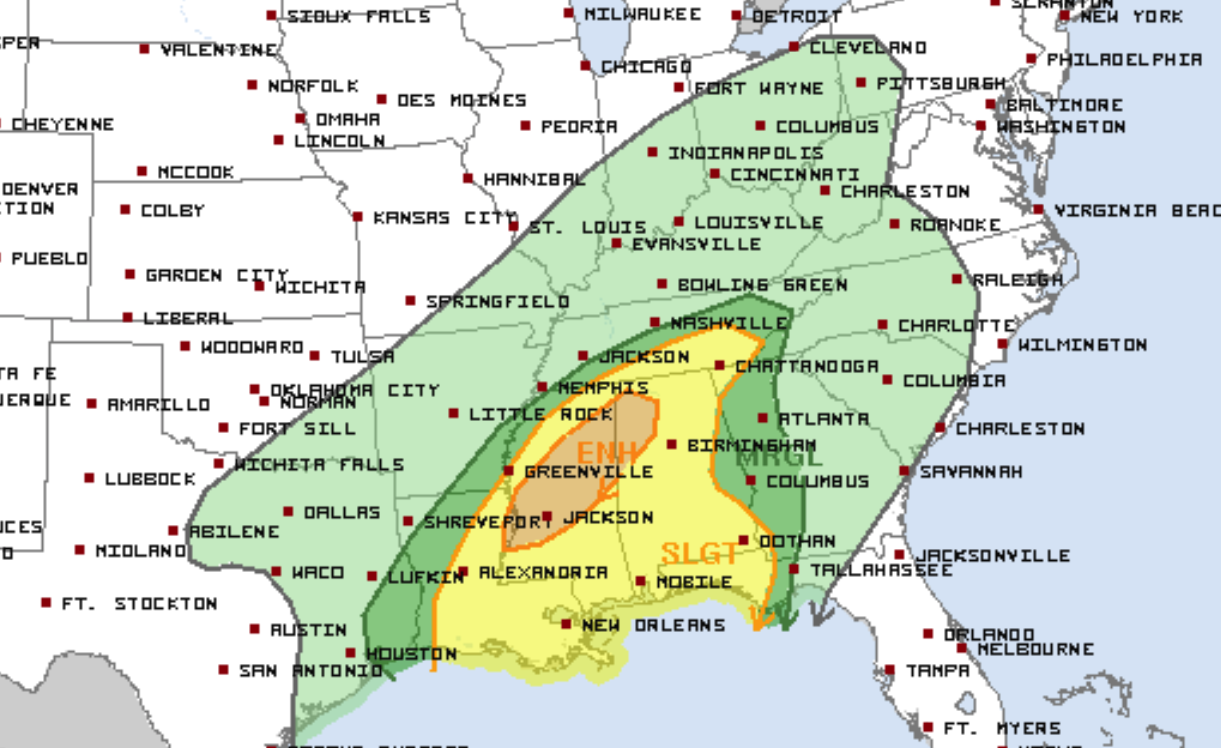 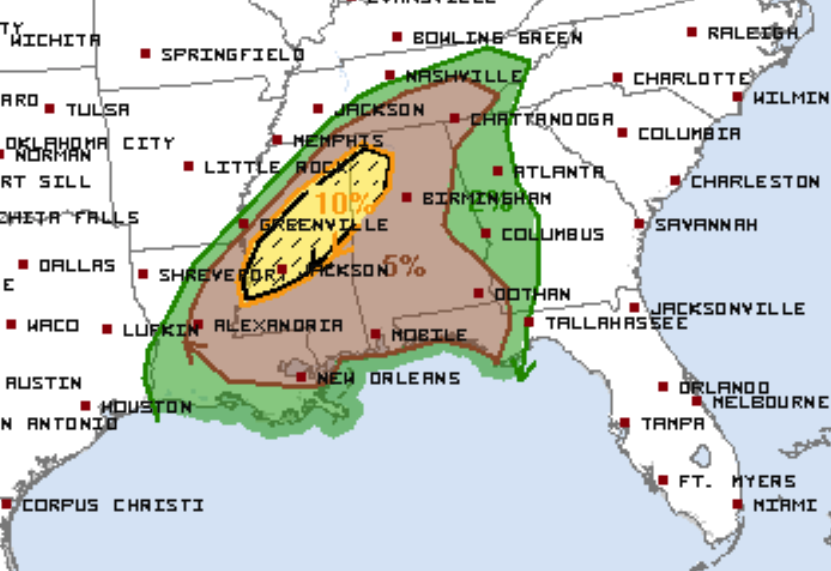 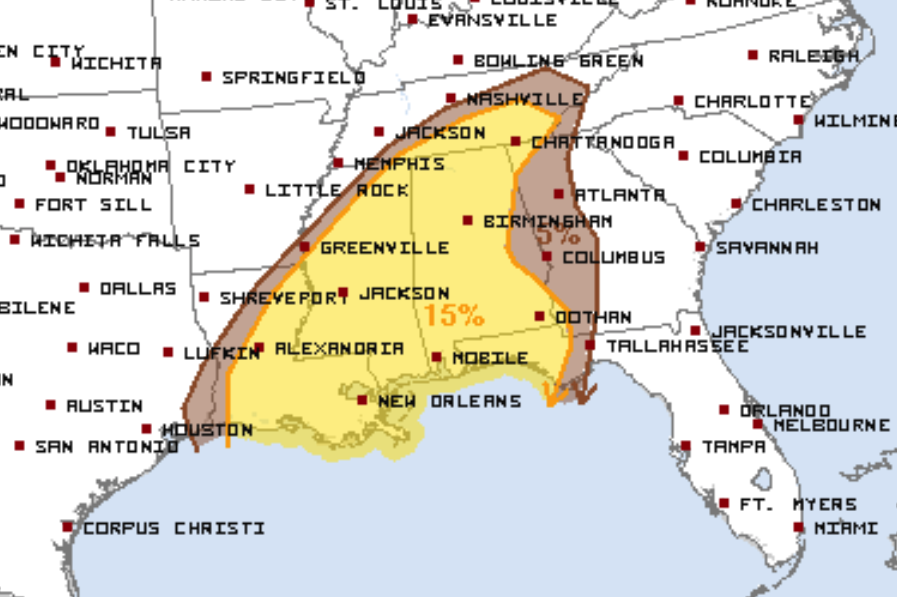 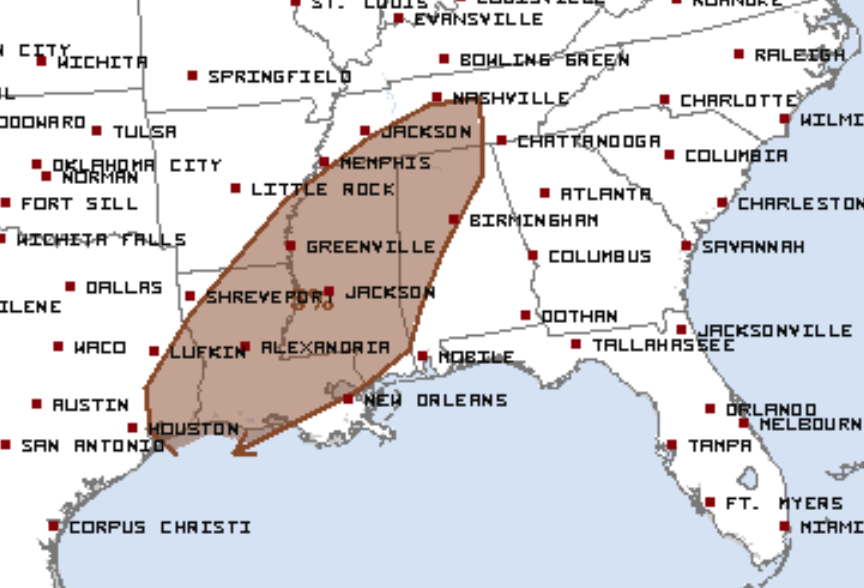 Morning water vapor imagery shows a strong upper trough digging across the southern Plains. In the low-levels, a deepening surface low currently over LA will track northeastward along the front into parts of MS and northwest AL this afternoon and evening.

The air mass in the warm-sector has become quite moist with dewpoints in the mid/upper 60s, with forecast soundings suggesting afternoon MLCAPE values around 1500 J/kg. Given the increasing forcing mechanisms, this should be sufficient for scattered thunderstorm development in the vicinity of the low and front. 12z CAM solutions suggest that convection will first form over central LA as the large-scale forcing approaches.

Low-level vertical shear will promote some risk of discrete supercells, along with more complex bowing structures. Forecast hodographs indicate favorable parameters for a few tornadoes, including the risk of strong tornadoes, as activity builds northeastward across the ENH risk area. Damaging wind gusts and perhaps some hail is also possible in the strongest cells.

Later tonight, another round of severe storms appears likely to form along/ahead of the front across the remainder of the SLGT risk area. Models are more diverse regarding timing/placement of this activity, but sufficient vertical shear will pose a risk of a few supercells capable of damaging winds and isolated tornadoes.

Scattered severe thunderstorms, capable primarily of damaging gusts and perhaps a few tornadoes, are forecast from the northeast Gulf Coast northward into the Carolinas. 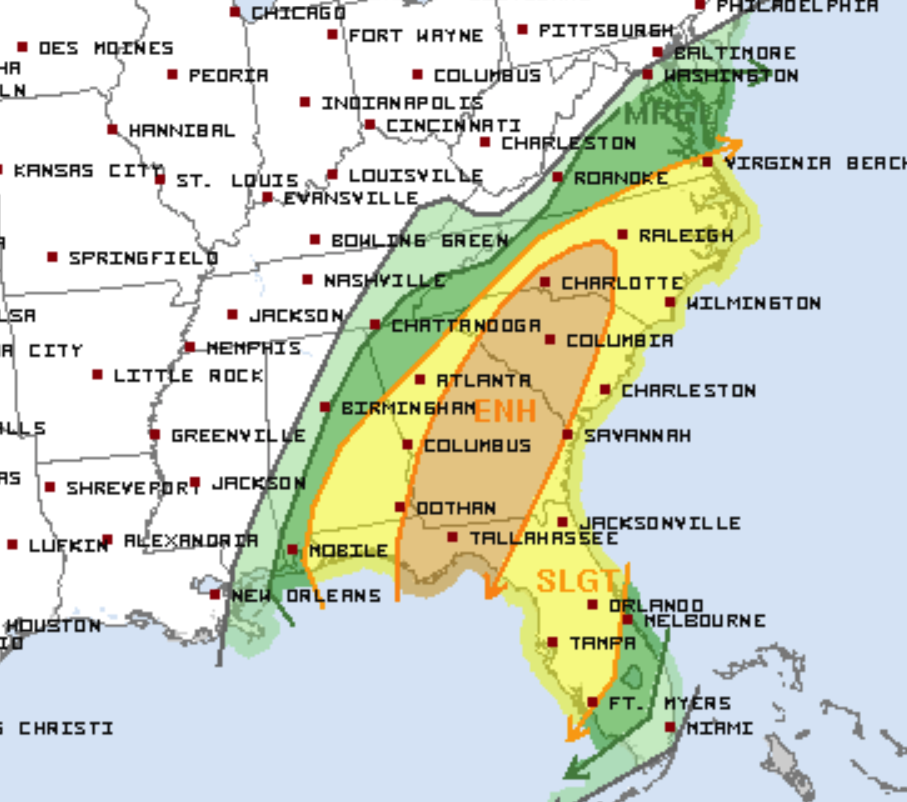 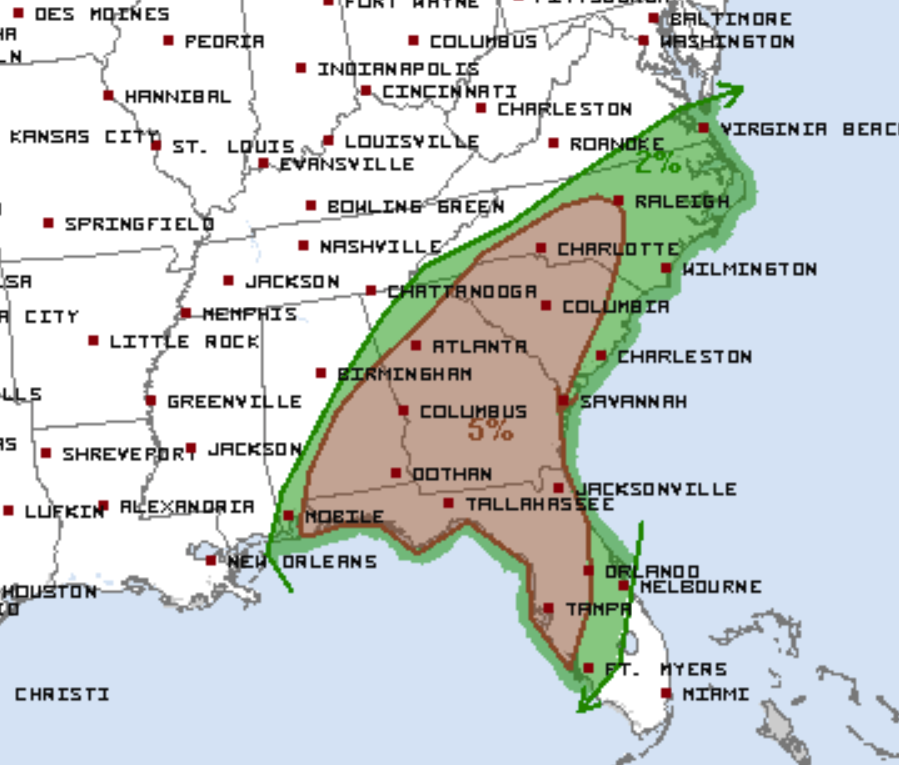 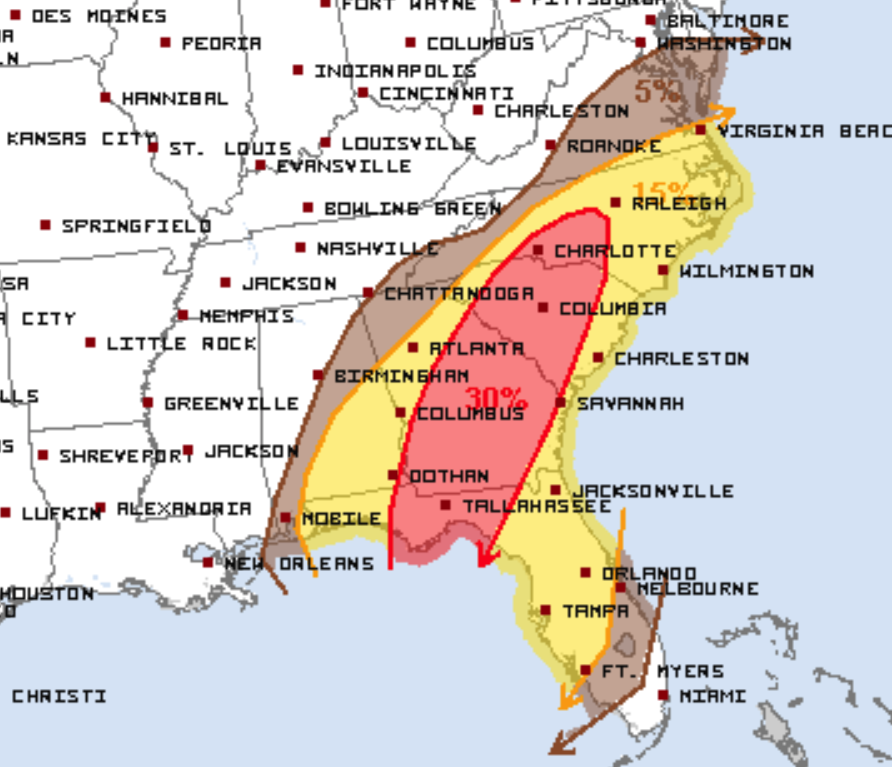 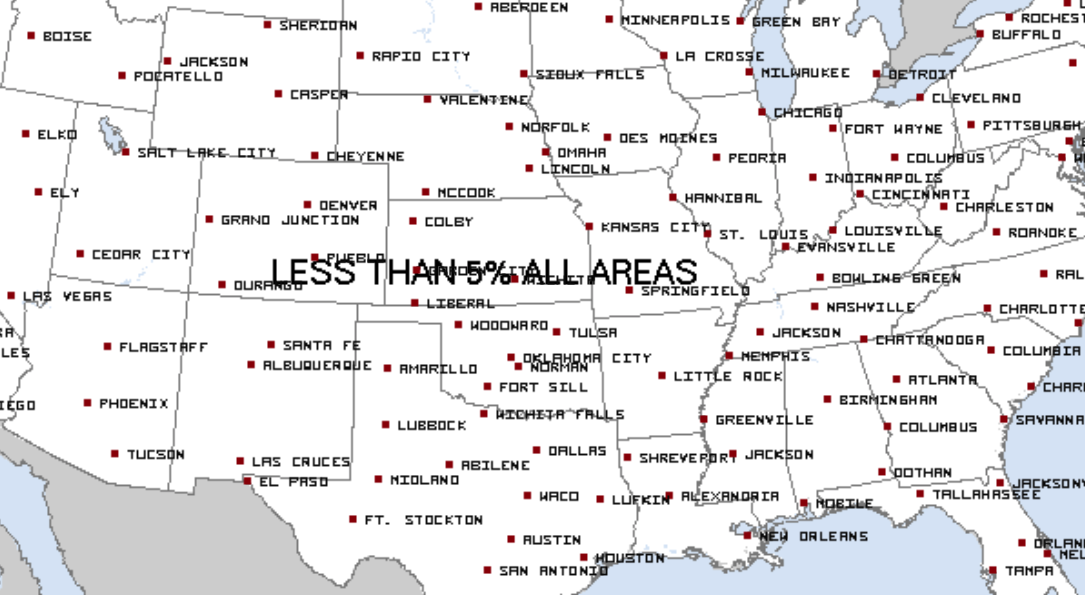 …Southeast to the Mid-Atlantic…

A large-scale upper trough over the Plains and Upper Midwest is forecast to amplify Thursday as it moves eastward over the MS/TN/OH Valleys. As this occurs, both a low and mid-level jet should strengthen across parts of the Southeast into the Mid-Atlantic.

At the surface, a low initially over parts of the OH Valley should slowly develop northeastward across the Appalachians. A secondary surface low is forecast to form over the western/central Carolinas by late Thursday afternoon, and eventually, merge with the primary low over the coastal Mid-Atlantic and Northeast late Thursday night.

A cold front extending southwestward from these surface lows will sweep eastward across parts of the Southeast into the Carolinas and Mid-Atlantic. Storms will very likely be ongoing at the start of the period Thursday morning along or just ahead of the cold front across parts of southern/central AL into the FL Panhandle and western GA.

Although instability will remain weak, a strongly sheared wind profile across this region should support continued storm organization. Damaging winds would appear to be the primary threat given the mainly linear storm mode, but a couple of embedded tornadoes cannot be ruled out either given effective SRH generally in excess of 200 m2/s2.

As the upper trough mentioned previously advances eastward, southwesterly flow within roughly the 850-700 mb layer is expected to quickly increase to 50-70+ kt across the warm sector extending from northern FL northeastward to the Carolinas and southeastern VA.

Low-level moisture should also gradually increase across this region, with surface dewpoints in the low to mid 60s becoming common by early Thursday afternoon.

Resultant MLCAPE of 250-750 J/kg should develop even with only modest diurnal heating. Given the very strong flow present in low to mid-levels and the linear forcing of the front, at least scattered damaging winds should be the main severe risk along a line of thunderstorms from parts of northern FL into much of central/eastern GA, SC, and central NC.

A couple QLCS tornadoes cannot be ruled out either.

An isolated damaging wind threat may persist Thursday evening into the overnight across much of the FL Peninsula, although large-scale ascent will more muted compared to locations farther north. Strong to locally severe wind gusts may also continue with the squall line Thursday night across central/eastern NC and far southeastern VA – SPC > Gleason