The greatest severe-weather threat extends from parts of central/eastern Oklahoma to north-central/east Texas, to the lower Mississippi Valley.

Any relatively discrete cells that can maintain enough mature-stage residence time in the instability plume will pose a risk of tornadoes (possibly strong) and very large, damaging hail. 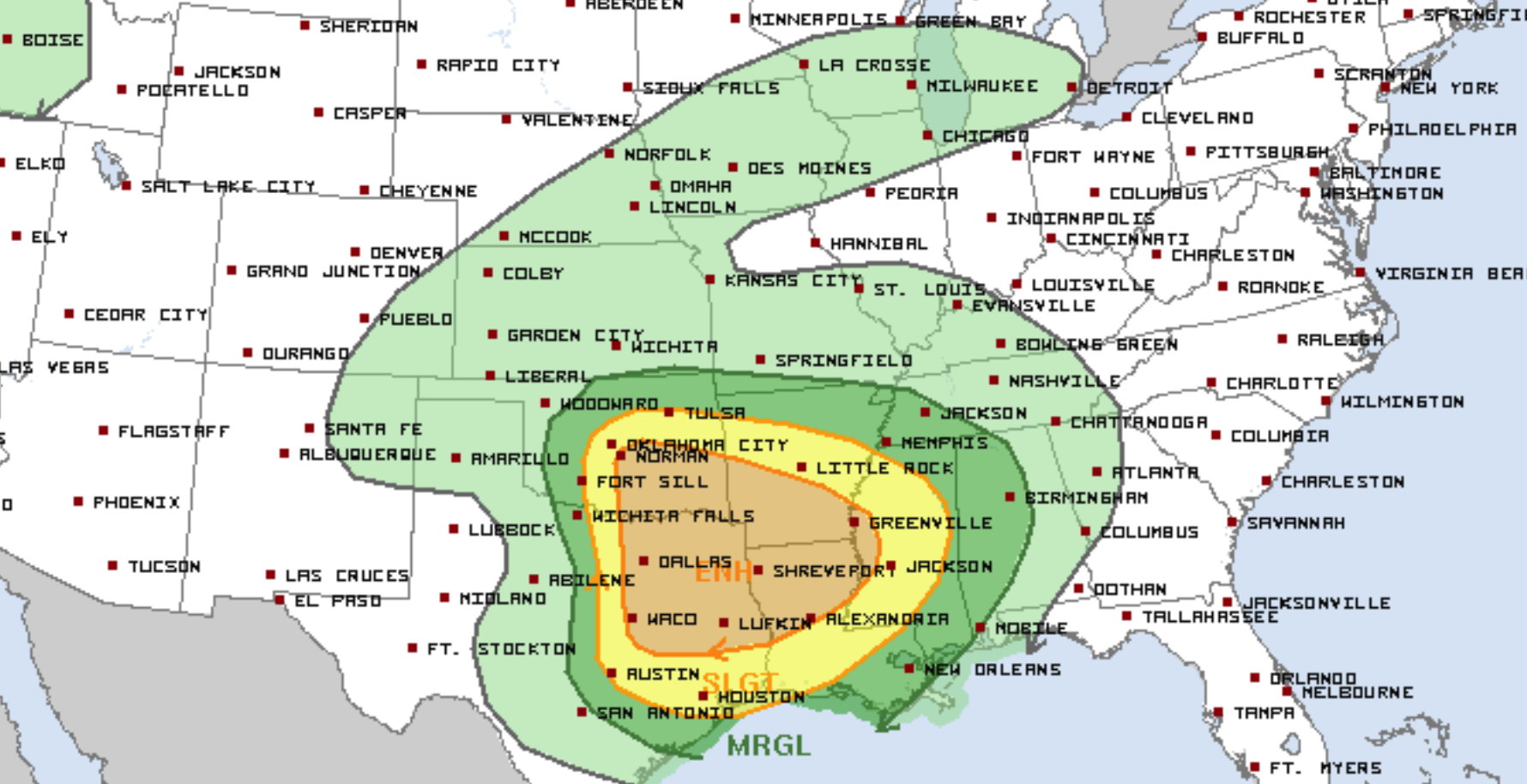 A progressive belt of westerlies and northwesterlies will overlie the CONUS behind a strong cyclone moving down the St. Lawrence River in southeastern Canada. The most important feature aloft for this forecast will be a trough, initially evident in moisture channel imagery from a small/closed low near CAO across southern NM and northwestern MX.

This perturbation should move eastward to eastern KS, central OK and west TX by 00Z, then eastern/southern MO, the Arklatex region and central/southwest TX by 12Z tomorrow. At the surface 11Z analysis showed a low over the southeastern TX Panhandle, with dryline south-southwestward over the Permian Basin to near the Big Bend.

A wavy warm front was drawn across southwestern OK and extreme north-central TX (reinforced by outflow in those areas), then winding southeastward over northeast, east- central and southeast TX to coastal southwestern LA.

The warm front will move northward erratically today and tonight, modulated strongly by areas of clouds/precip and outflow on its poleward side. By the end of the period, this boundary may reach parts of central/eastern MS and southeastern MS/southwestern AL.

The dryline should sharpen through the day and move eastward largely in step with the surface low/triple point, with a bulge or surge possible across southern OK. By 00Z, the dryline should extend from parts of east-central/southeastern OK, east of the DFW Metroplex to central TX, before being overtaken by a cold front from north-south.

By 12Z, the combined boundary should extend from the low over southeastern MO, across the Mid-South region and central LA to the middle/upper TX Coastal Plain. 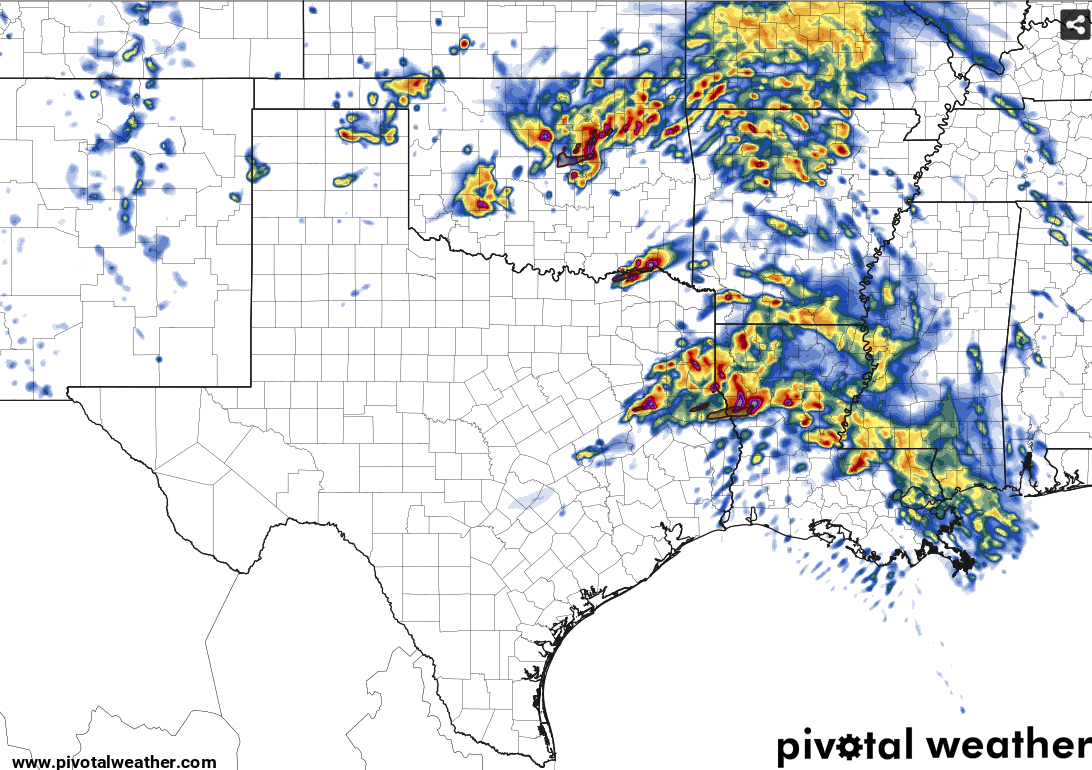 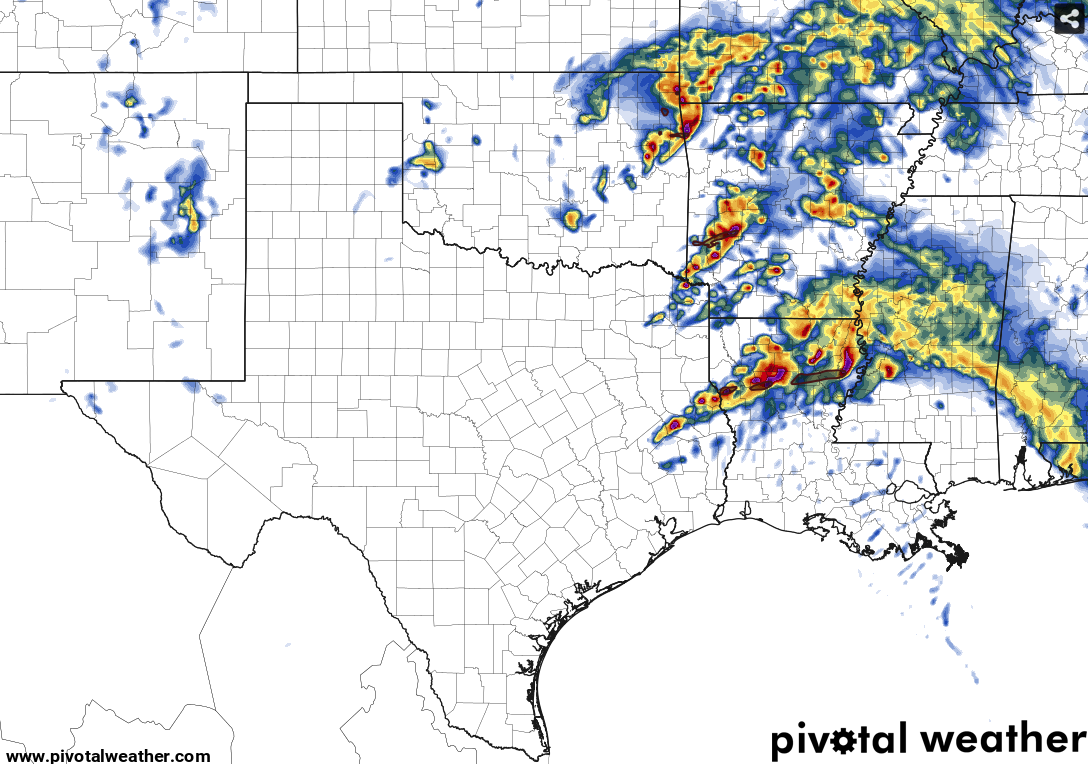 Sporadic severe hail may remain possible for a few more hours from an area of elevated thunderstorms initially over northern OK. Otherwise, a broad area farther south and southeast will have a threat of all severe hazards today and tonight.

However, mesoscale processes likely will render severe-weather production much more non-uniform than implied by the broad-brushed appearance of the outlook lines. From this afternoon into the overnight hours, two regimes should dominate organized severe potential:

1. A broad, leading warm-advection and moisture-transport plume crossing, but mostly north, of the surface warm-frontal zone. This regime will shift slowly eastward from east TX and LA toward portions of MS and AL through tomorrow morning, supporting scattered to numerous embedded thunderstorms.

All hazards are possible. The greatest severe threats should be around the southern and western portions of the expansive precip plume, near the warm front and somewhat into the warm sector, where activity will have best access to relatively unperturbed, increasingly moist/unstable, low-level trajectories. Rich low-level moisture (east of the surface dry hole described below) will spread across the region, around the southern and western rim of the plume, as the warm front moves northeastward.

Diurnal heating and related steepening of low-level lapse rates will occur in a boundary layer containing mid 60s to low 70s F surface dew points, some of this beneath the eastern edge of DCVA/cooling aloft. With mid/upper-level lapse rates increasing westward, warm- sector MLCAPE should range from around 1500-2000 J/kg south of the precip plume to the 3000-4000 J/kg range to its southwest and west.

This horizontal profile of buoyancy should shift eastward overnight ahead of the cold front in support of additional development on the west/south side of the precip area. Meanwhile, strong to severe thunderstorms in the plume — perhaps as an MCS — may move eastward across the Delta region, with the potential to outpace the favorable surface-based destabilization farther east.

2. A narrow but pronounced corridor of destabilization between the warm-advection regime and the dryline, located from central/north- central TX to central OK during midday and shifting eastward to east-central OK and east-central TX by late afternoon.

This process will be related to both diurnal heating and strong DCVA/cooling aloft ahead of the low/trough, from near the surface low/triple point southward. Resultant steepening of low/middle-level lapse rates will occur amidst a somewhat fragmented boundary-layer moisture field. The latter is related to both:

a. Earlier convective processes and outflow across OK and

b. Trajectories inconsistently emanating from a well-defined dry hole that has been analyzed on surface charts over central/north- central TX during the prior overnight into this morning.

As such, buoyancy likely will not be uniform up and down the corridor, but pockets of 2500-3500 J/kg MLCAPE occurring amidst 45-55-kt effective-shear magnitudes and 200-400 J/kg effective SRH.

As such, any relatively discrete cells that can maintain enough mature-stage residence time in the instability plume will pose a risk of tornadoes (possible strong) and very large, damaging hail. Aided by cooling aloft and frontal/prefrontal convergence, some of this activity may shift into AR overnight, perhaps merging with the western part of the first regime.