A regional outbreak of severe thunderstorms is expected today (Sunday April 19, 2020) across portions of the lower Mississippi Valley eastward across the Deep South.

Several tornadoes (a few strong), widespread damaging wind gusts, and large hail (some greater than 2 inches in diameter) are expected in several rounds of storms from this morning into tonight. 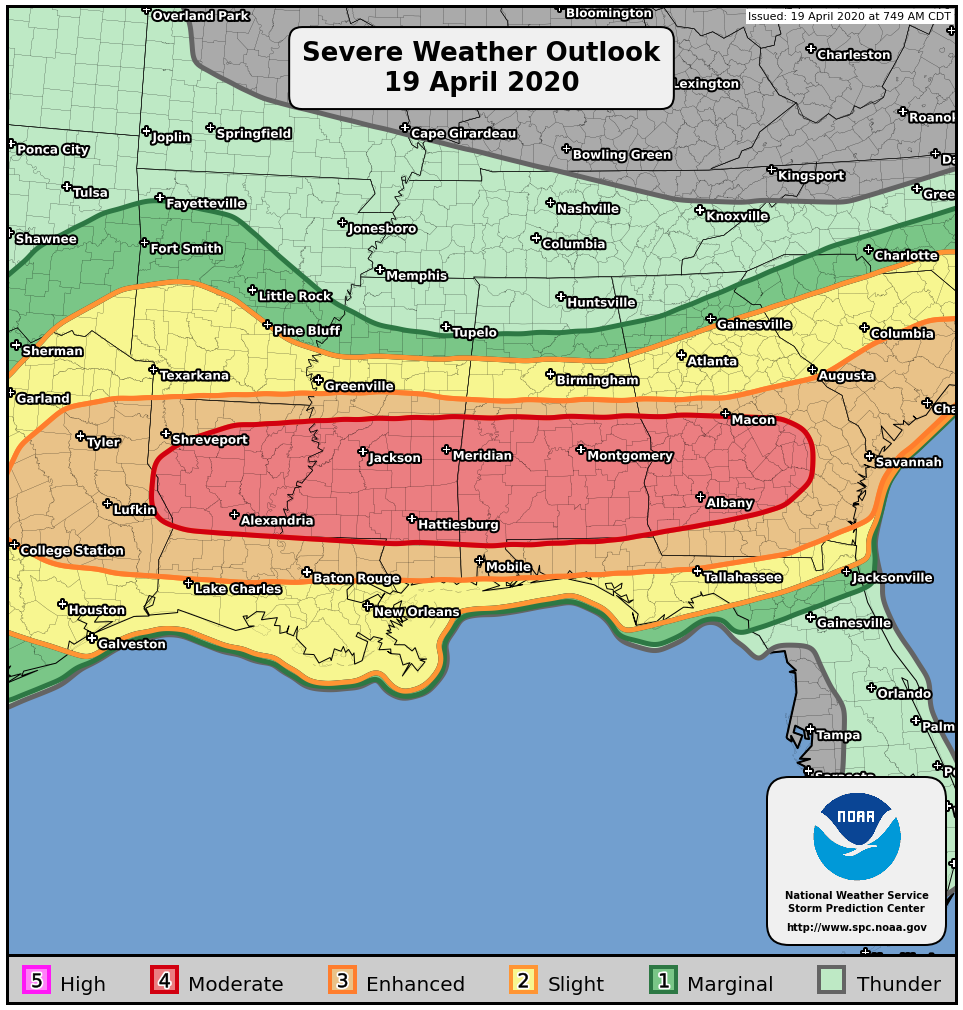 A severe-weather outbreak is expected across much of the Deep South through tonight. The greatest threat will extend from east Texas and Louisiana, eastward across Mississippi, and into parts of Alabama and Georgia. Multiple episodes of thunderstorms will result in tornadoes, including the possibility for a few strong tornadoes. Scattered to widespread damaging wind gusts and large hail are also possible.

In mid/upper levels, the continental pattern will be dominated by a very large cyclone covering much of northern and eastern Canada, centered north of Hudson Bay. Associated cyclonic flow will extend across the Great Lakes.

The long-lived ridge upstream — initially positioned off the Pacific Northwest to the main body of AK — will deamplify and move ashore from the AK Panhandle to interior WA/OR through the period. Meanwhile, to its south, an unbroken southern- stream fetch will continue from off the CA coastline across the Southwest and southern Plains, blending into a broad area of nearly zonal flow from the Mississippi Valley eastward.

An embedded trough — initially evident in moisture-channel imagery from the TX Panhandle to southeastern NM and far west TX — will be the main shortwave influence for this forecast.

Available morning RAOBs and radar-derived wind profiles already are strengthening ahead of this feature over central and north TX. This process — along with increasing large-scale lift — will spread eastward across the South in step with the trough’s translation eastward to parts of AL/GA by 12Z tomorrow.

At the surface, 11Z analysis showed a wavy warm front from near SSI across southern GA, the northwestern FL Panhandle, to near MOB, HEZ, DRI, to a weak low near CLL. A diffuse cold to quasistationary front extended from there southwestward across the LRD area.

The warm front is expected to shift northward through the day, to northern LA and central portions of MS/AL/GA. Further poleward progress of the front effectively should be stalled by ongoing and increasing convection to its north, before MCS activity overtakes it in a west-east manner.

Multiple episodes of severe thunderstorms are expected to cross the outlined severe-risk corridor through tomorrow morning. In aggregate, this activity should yield a swath of damaging wind, tornadoes and large hail.

Tornadoes are possible from supercells near the warm front, in the warm sector, and a combination of line-embedded supercells and QLCS vortices with a dominant MCS that is forecast to sweep across the outlook area from west to east.

Initial severe threats this morning should evolve out of activity in the eastern and western ends of the outlook swath. An ongoing area of mostly non-severe, elevated thunderstorms over parts of MS/AL may continue to offer isolated, sporadic large-hail potential, while its southern end accepts progressively more-unstable inflow rooted nearer to the surface with time in eastern AL and GA.

Other thunderstorms may develop over parts of central/southern GA, moving into a diurnally destabilizing air mass closer to the GA coast. Meanwhile, ahead of the shortwave trough, strengthening deep-layer lift will support development and upscale growth of convection from central/east TX eastward this morning into afternoon, and perhaps from southeastern OK/northeast TX eastward this afternoon into overnight.

Significant-hail risk should be greatest relatively early in either associated MCS-organization process, or whatever warm-sector supercells form, in a regime of steep low/middle-level lapse rates and favorable deep shear. As this activity shifts quickly eastward, it will encounter relatively maximized low-level shear/lift along the warm front, as well as a warm sector characterized by upper 60s to low 70s F surface dew points, greater diurnal heating, 2000-3000 J/kg MLCAPE, and 40-55-kt effective-shear magnitudes. 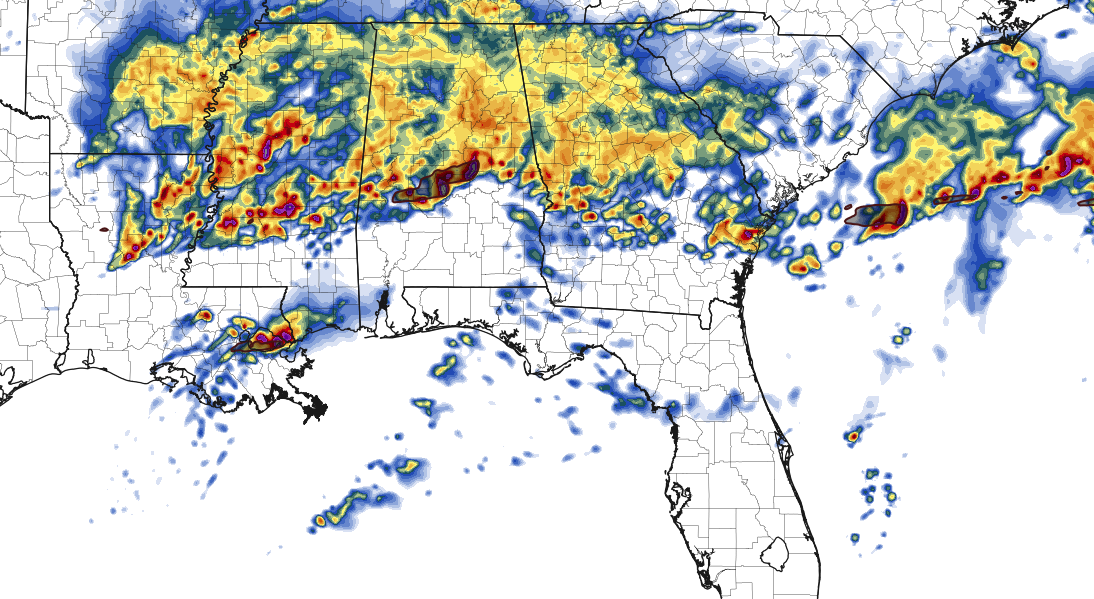 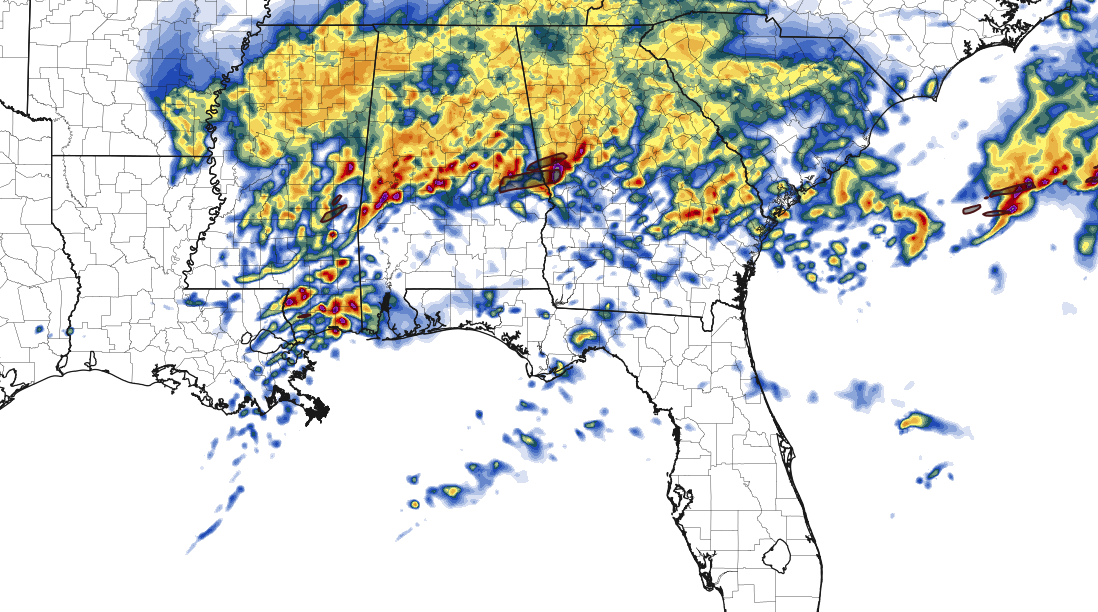 Though westerly surface-wind components will limit hodograph size somewhat, effective SRH of 200-400 J/kg is possible in the warm sector, larger in the warm-frontal zone. Strong-severe thunderstorms should train along and north of the front as far east as coastal SC, until the MCS activity arrives late tonight into tomorrow morning with a predominant wind/tornado threat.

The main uncertainties precluding greater probabilities at this time are two-fold:

1. Coverage and duration of any supercells in the free warm sector, about which most synoptic and convection-allowing progs appear somewhat reserved, in the absence of stronger deep-layer/pre-MCS forcing,

Tornado Watch for portions of

Effective this Sunday morning and afternoon from 840 AM until 300 PM CDT. 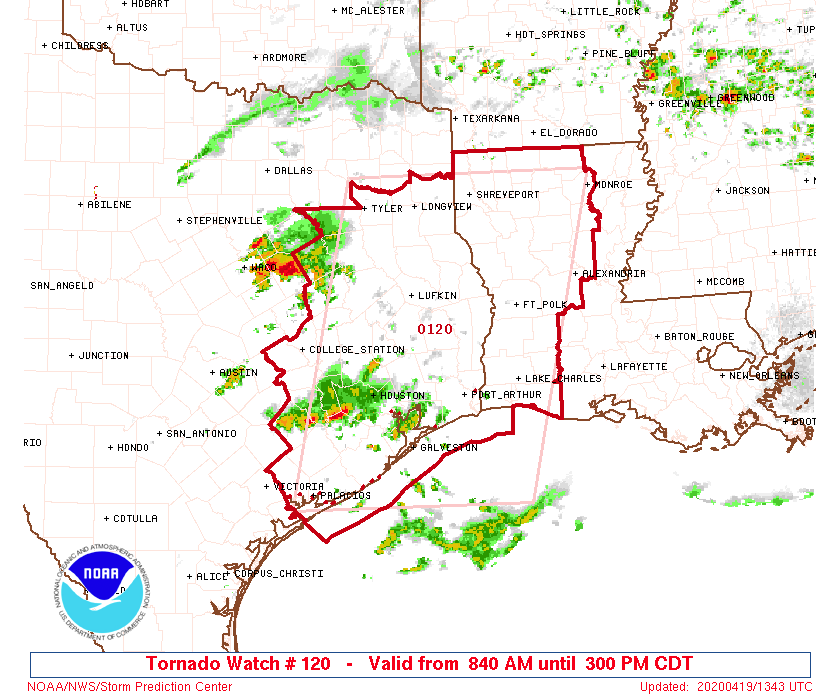 Thunderstorms are expected to intensify this morning across east Texas and spread across the watch area through the afternoon.

Large hail is the primary threat this morning. But increasing winds aloft will promote a risk of tornadoes by early afternoon.