Hurricane and tropical storm warnings are in effect for portions of the U.S. Gulf Coast today as Sally continues to churn for landfall later this week! 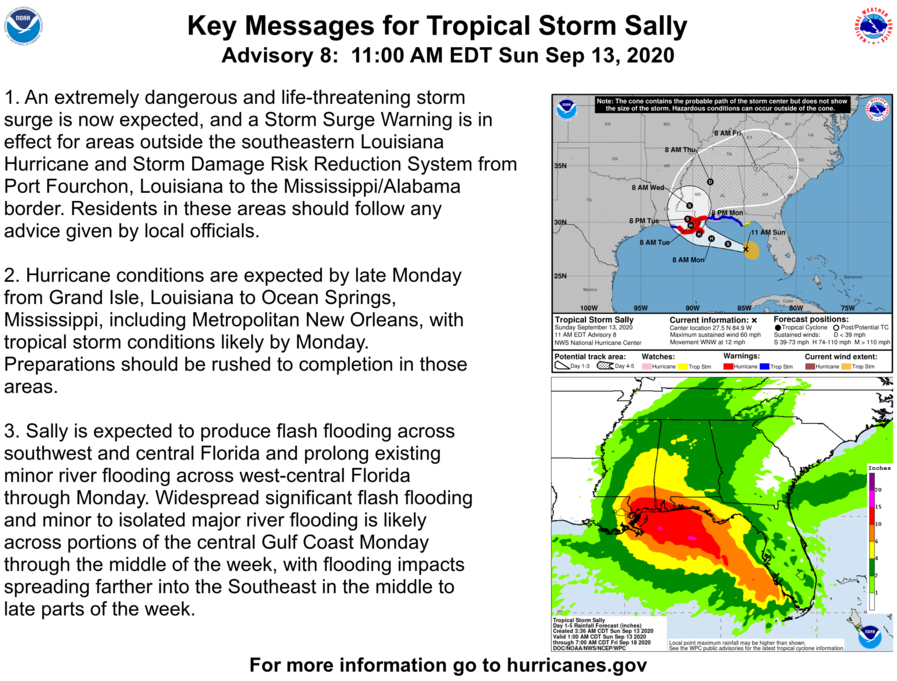 Sally was gathering strength as it moved over the Gulf of Mexico, where water temperatures range from the low- to mid-80s F, and the storm is forecast to reach hurricane strength before making landfall along the Gulf Coast.

Currently the system is producing rain and thunderstorms over western Florida at this time. The storm brought flooding rainfall to parts of the Florida Keys on Saturday. Some areas in the Keys picked up nearly a foot of rainfall. 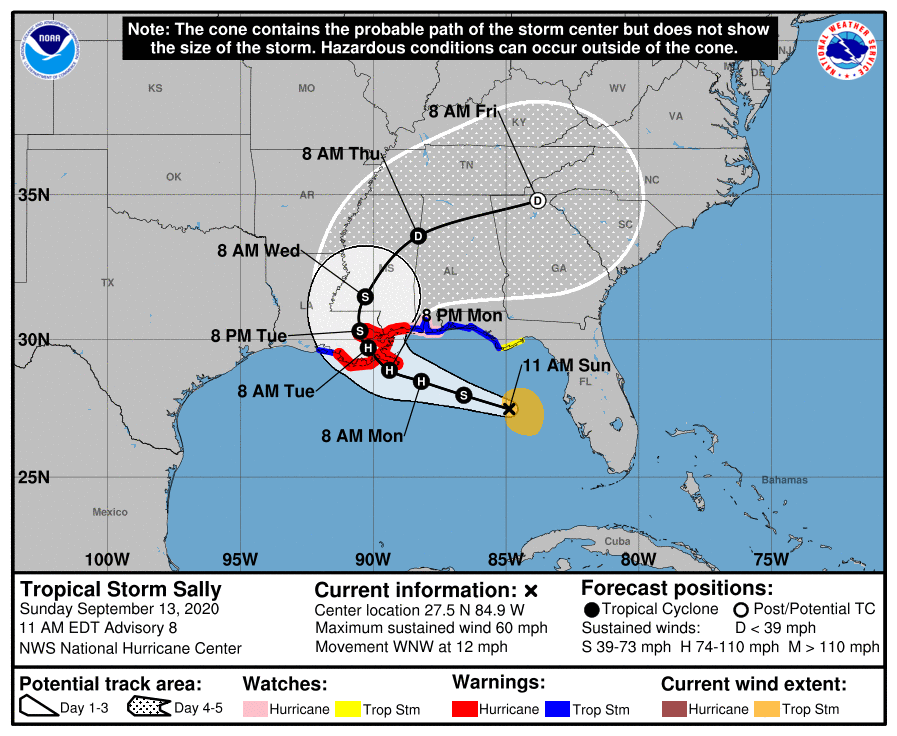 By late morning on Sunday, the storm was centered 135 miles west of St. Petersburg, Florida, and about 280 miles east-southeast of the mouth of Mississippi River.

Sally was moving west-northwestward at 12 mph and maximum sustained winds had increased to 60 mph. Sally, formerly Tropical Depression 19, ramped up quickly and strengthened to a tropical storm at 2 p.m. EDT on Saturday afternoon.

That said Sally is expected to strengthen as it moves northwestward toward the northern Gulf Coast early this week.

The system will arrive on the northern Gulf Coast beginning late Monday and Tuesday and could be a Category 1 or 2 hurricane as it nears landfall, according to the latest National Hurricane Center forecast.

NOTE: There is uncertainty in this intensity forecast, so stay alert for possible changes.

Sally will likely slow down near the coast of Louisiana and Mississippi on Monday night into Tuesday. That slow forward speed could result in prolonged impacts from rainfall, storm surge and strong winds.

1 to 3 inches with locally up to 6 inches in southwestern Florida through Monday.

-6 to 12 inches with locally up to 20 inches on the Gulf Coast from the western Florida Panhandle to far southeast Louisiana from Monday into the middle of the week.

-4 to 8 inches is possible farther inland over portions of Mississippi and Alabama.

This rainfall could trigger serious flash flooding and river flooding in some of these areas.

A potentially life-threatening storm surge is expected along the northern Gulf Coast from Monday through at least Tuesday.

The highest storm surge of 7 to 11 feet is expected from the mouth of the Mississippi River to Ocean Springs, Mississippi, including Lake Borgne. Storm surge could be 4 to 6 feet in southeast Louisiana’s Lake Pontchartrain and Lake Maurepas.

Below is a look at the storm surge forecast for the Gulf Coast if peak surge occurs at the time of high tide. High tide along the Louisiana and Mississippi coasts is in the morning hours on both Monday and Tuesday.

The worst storm surge will be near and to the right of where the center of Sally makes landfall. Large waves could worsen the storm surge impacts in some areas and cause significant beach erosion on much of the northern Gulf Coast. 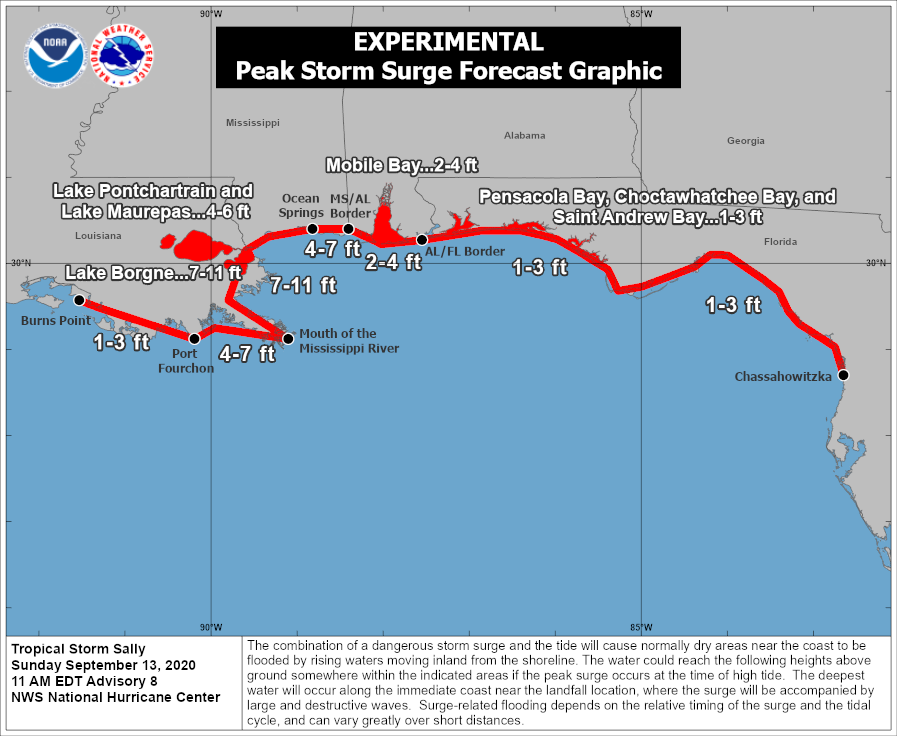 Strong winds will impact the Gulf Coast near where Sally crosses the coast later Monday into Tuesday.

The winds could contribute to structural damage, downed trees and power outages. 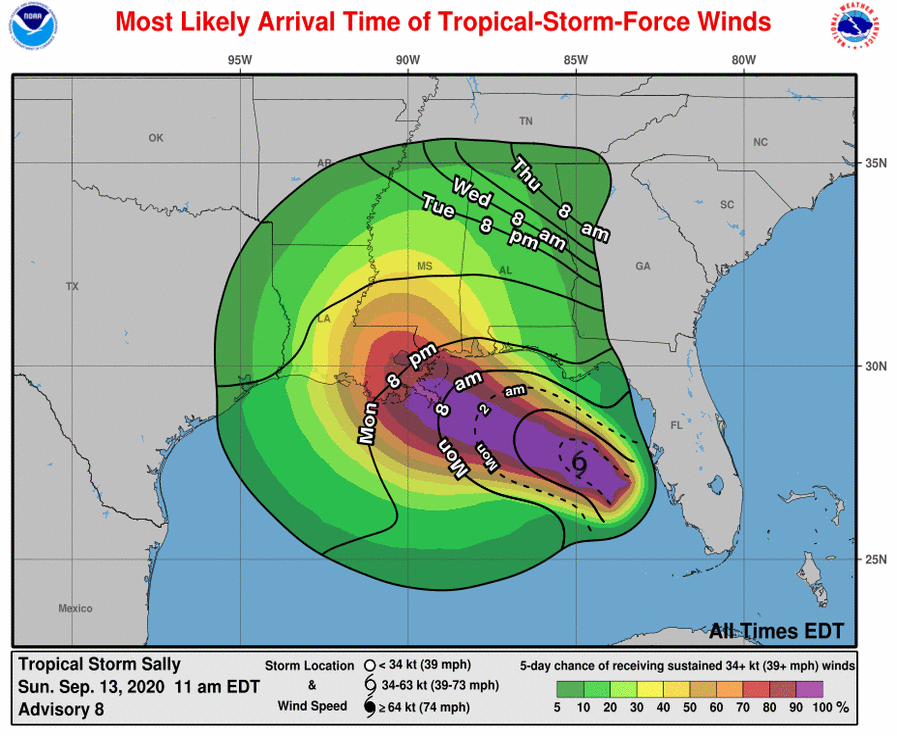 Now will be a good time to check your weather radios and have several ways to receive watches & warnings. 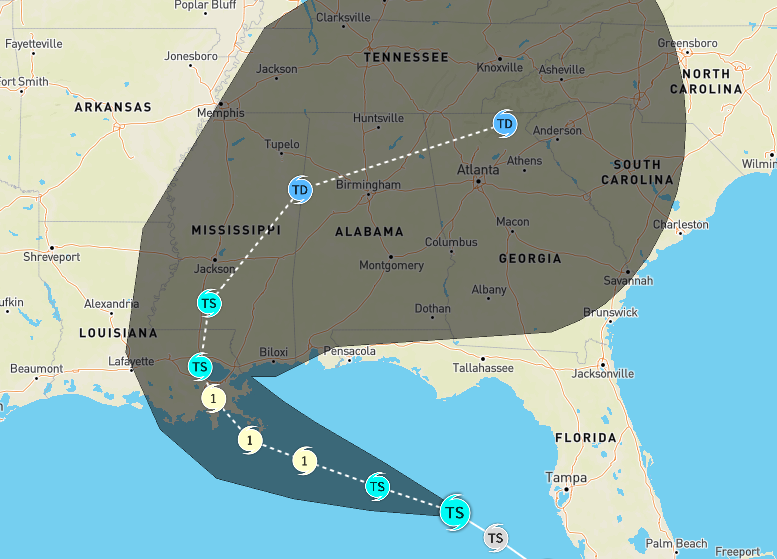 Dual Storms are making their approach to a Gulf Coast Landfall as Forecasted Hurricanes with a one-two punch!  Two tropical storms — Laura and Marco […]