An outbreak of severe thunderstorms is likely today into tonight, with the greatest threat expected from Louisiana through much of the Southeast and Tennessee Valley. Strong tornadoes will be most probable during the day from the northeast Louisiana across Mississippi and Alabama. Later in the afternoon and evening, another round of severe storms with Widespread Damaging Winds, Large Hail and Tornadoes (Some Strong & Intense) are expected across Arkansas into western Tennessee and western Kentucky by early tonight. The severe weather threat will persist into tonight and early Monday across Georgia and the western Carolinas. 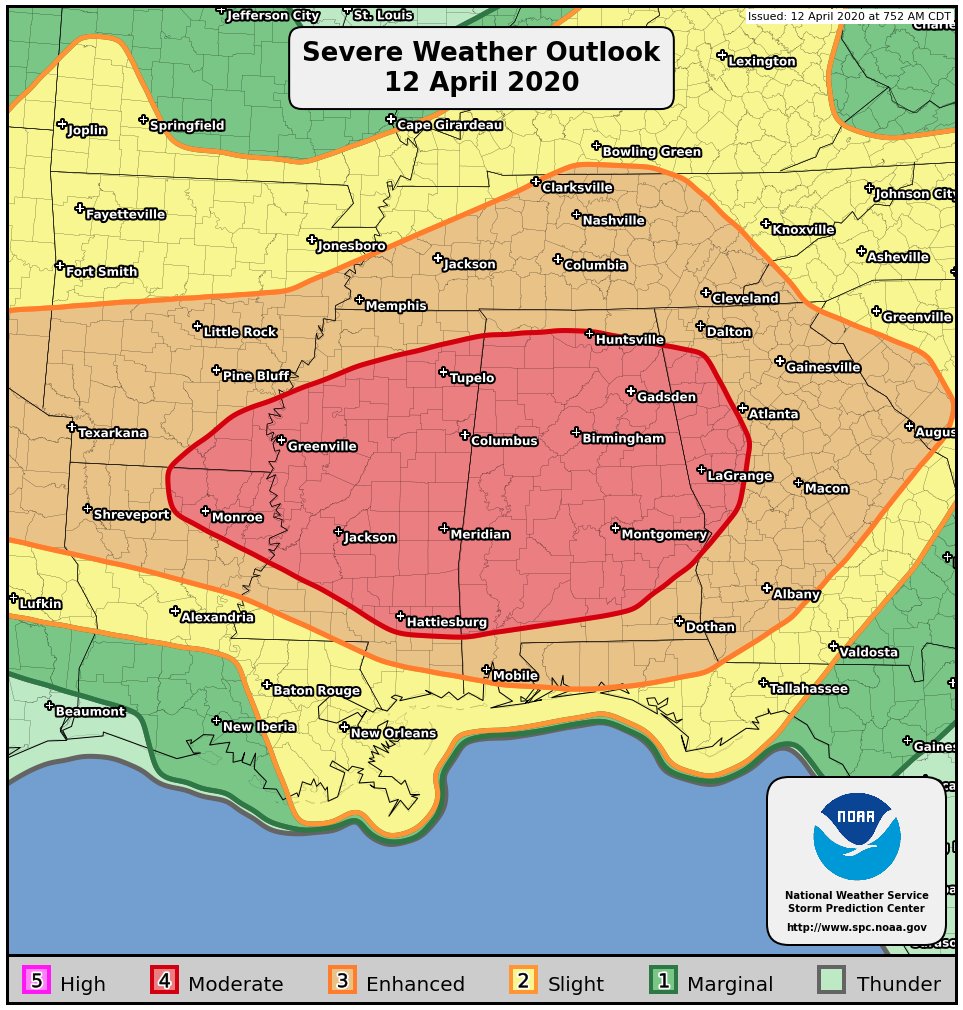 We expect more Tornado Watches to follow east of this watch

TORNADO WATCH for portions of

* Effective this Sunday morning from 550 AM until NOON CDT.

A few tornadoes likely with a couple intense tornadoes possible 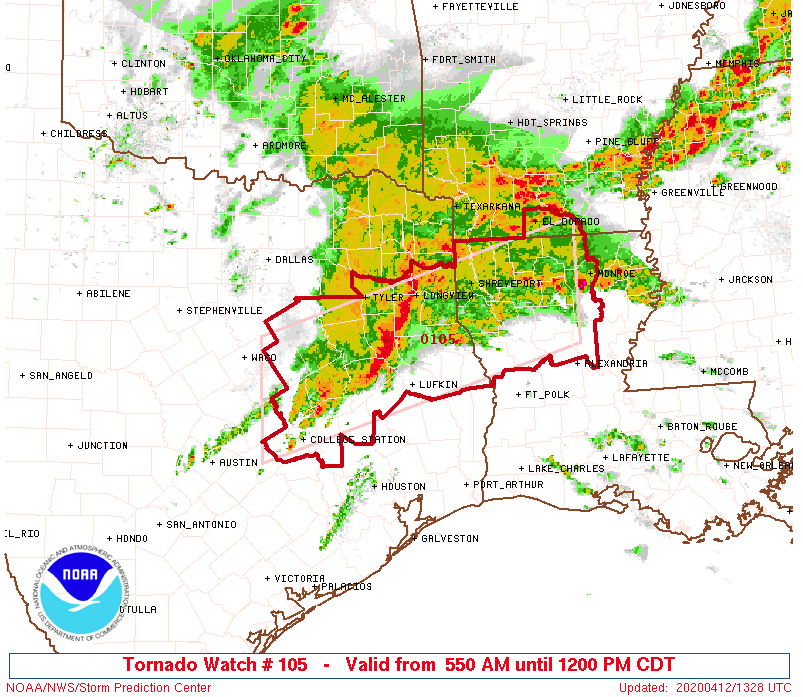 An increasingly organized storm cluster with embedded larger-scale circulation will likely persist through the morning while spreading east-northeastward into east central Texas and northwestern Louisiana. The storm environment will support embedded supercells and bowing segments capable of producing tornadoes and damaging winds as it warms and moistens quickly at the surface from Texas into Louisiana immediately in advance of the storms. 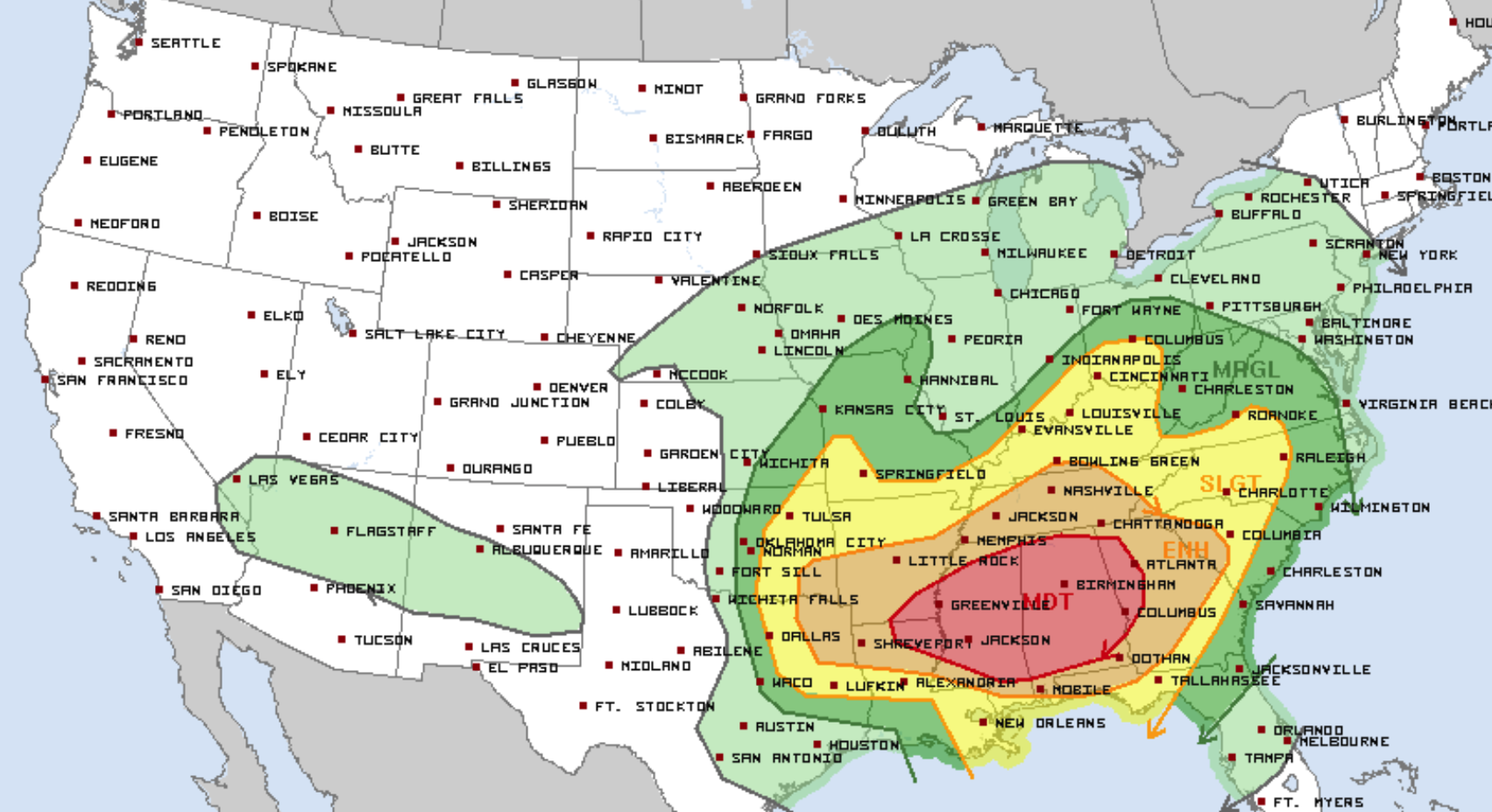 A complex forecast today with multiple scenarios possible across a broad area from the lower MS Valley into the TN/OH Valleys and the Southeast.

A midlevel trough near the TX Big Bend this morning will accelerate east-northeastward to the Ark-La-Miss by this evening and the Appalachians by the end of the period, in response to continued amplification of a large-scale trough over the north central CONUS.

At the surface, a cyclone will move across OK today and develop eastward to AR by this evening, followed by substantial deepening as the cyclone moves northeastward to the OH Valley/Great Lakes overnight.

A moist/unstable warm sector will surge northward across LA/MS/AL/GA today, setting the stage for severe storms with the ejecting shortwave trough and deepening cyclone through tonight. Several scenarios are possible within the overall outlook area, with substantial uncertainty related to early/ongoing convection now in TX. 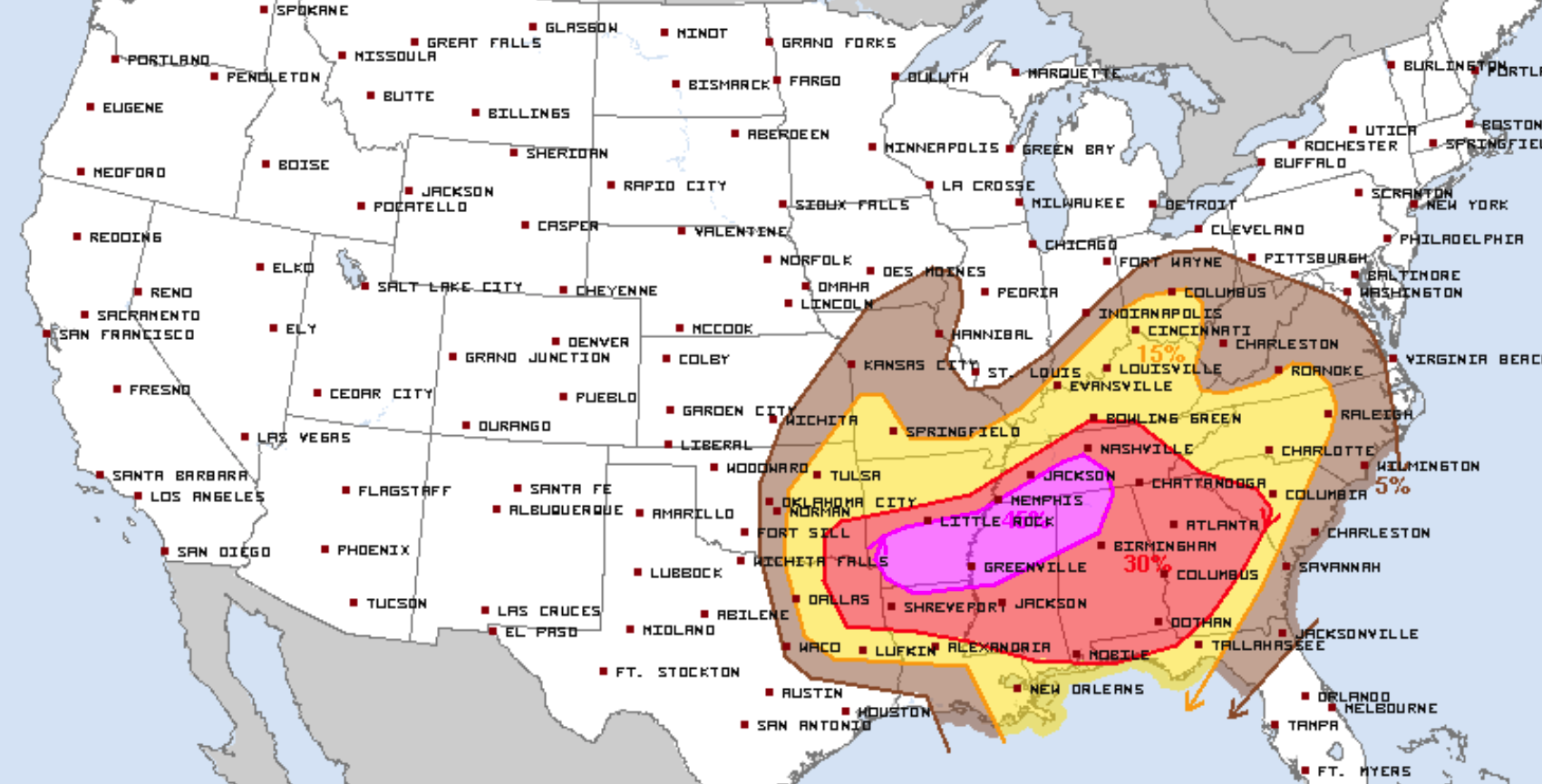 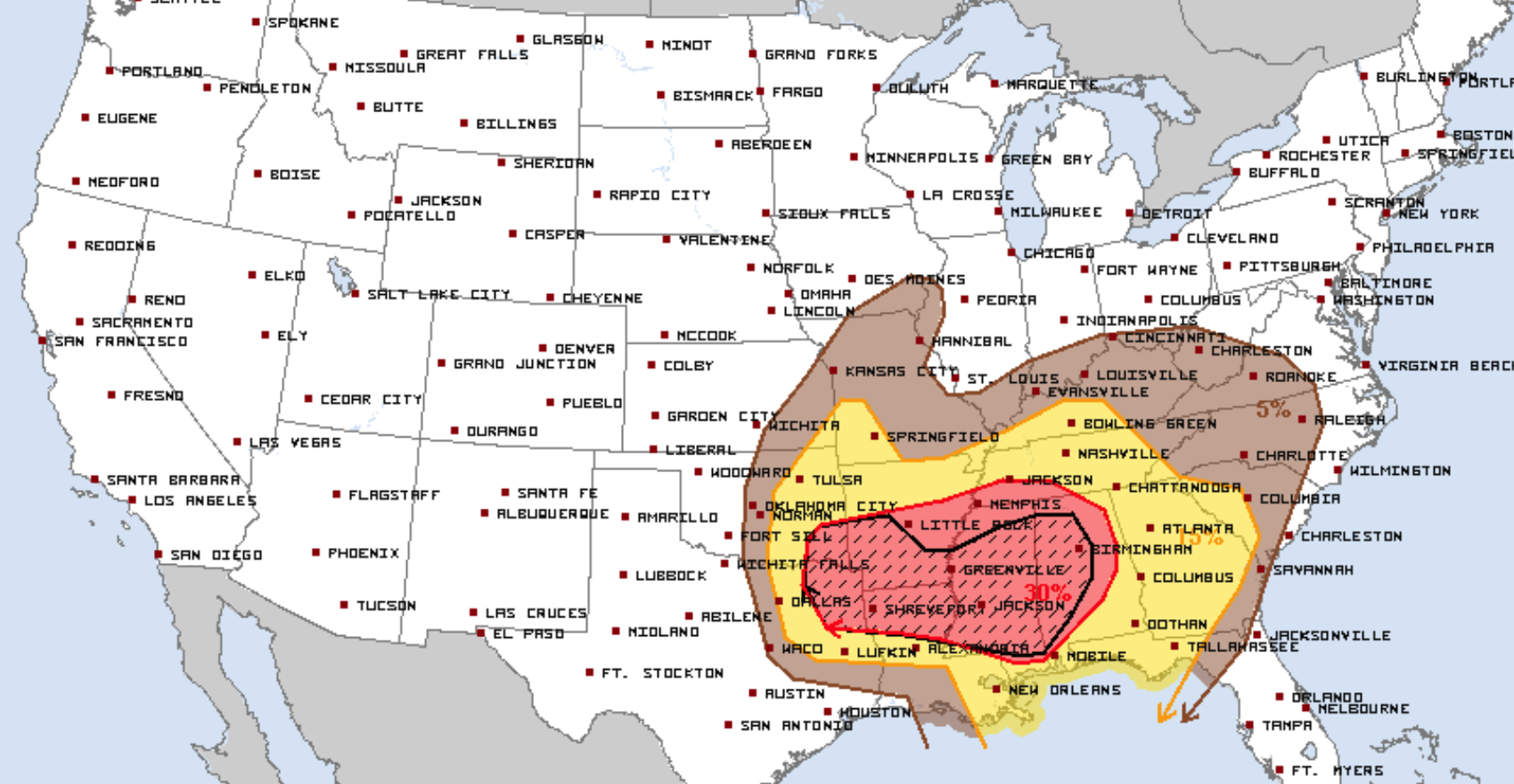 …Northeast TX to northern MS/AL and TN this afternoon…

An ongoing cluster of severe storms continues to move east-northeastward into east central and northeast TX this morning, in association with a lead shortwave trough. All hazards will be possible with this cluster which will include a mixed convective mode of supercells and bowing segments. 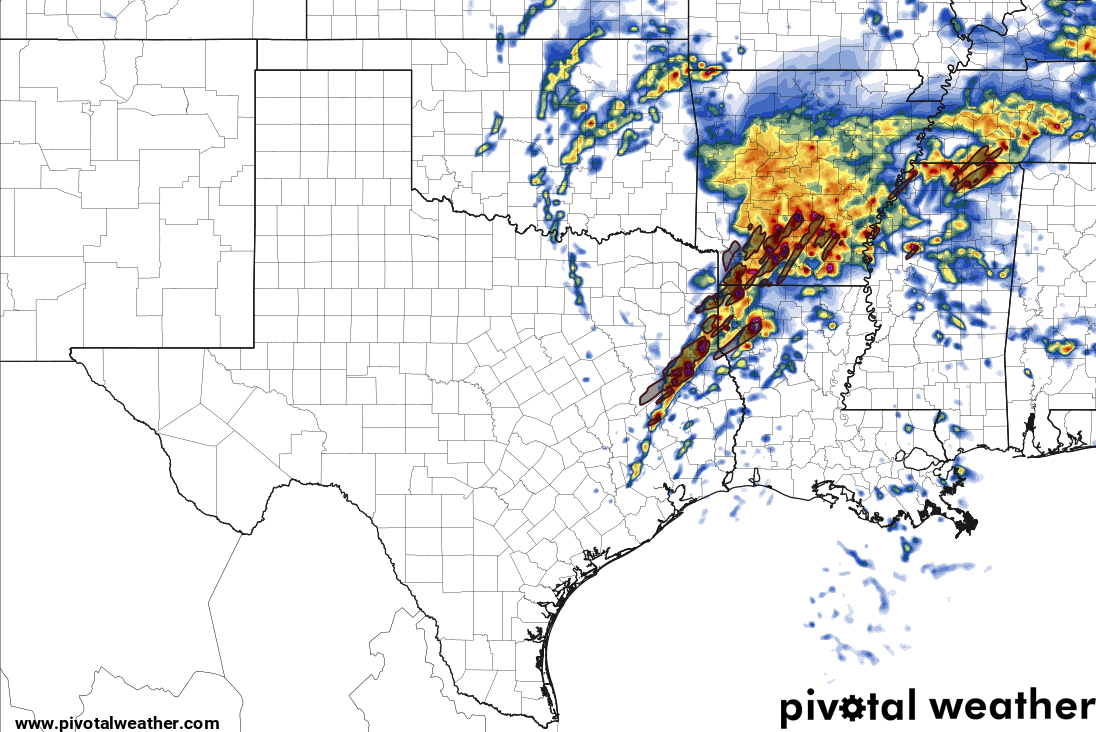 Low-level moisture will surge northward today across LA/MS/AL in response to the deepening cyclone moving from OK to AR. The main question through mid afternoon will be whether or not surface destabilization will keep pace with the initial cluster.

If warming/moistening can occur quickly enough, the chance for surface-based storms on the southern flank will increase. This may occur coincident with an environment characterized by moderate buoyancy (MLCAPE of 1500-2500 J/kg), very strong low-level shear (0-1 km SRH of 400-500 m2/s2) as the low-level jet strengthens over LA/MS, and effective bulk shear in excess of 70 kt. 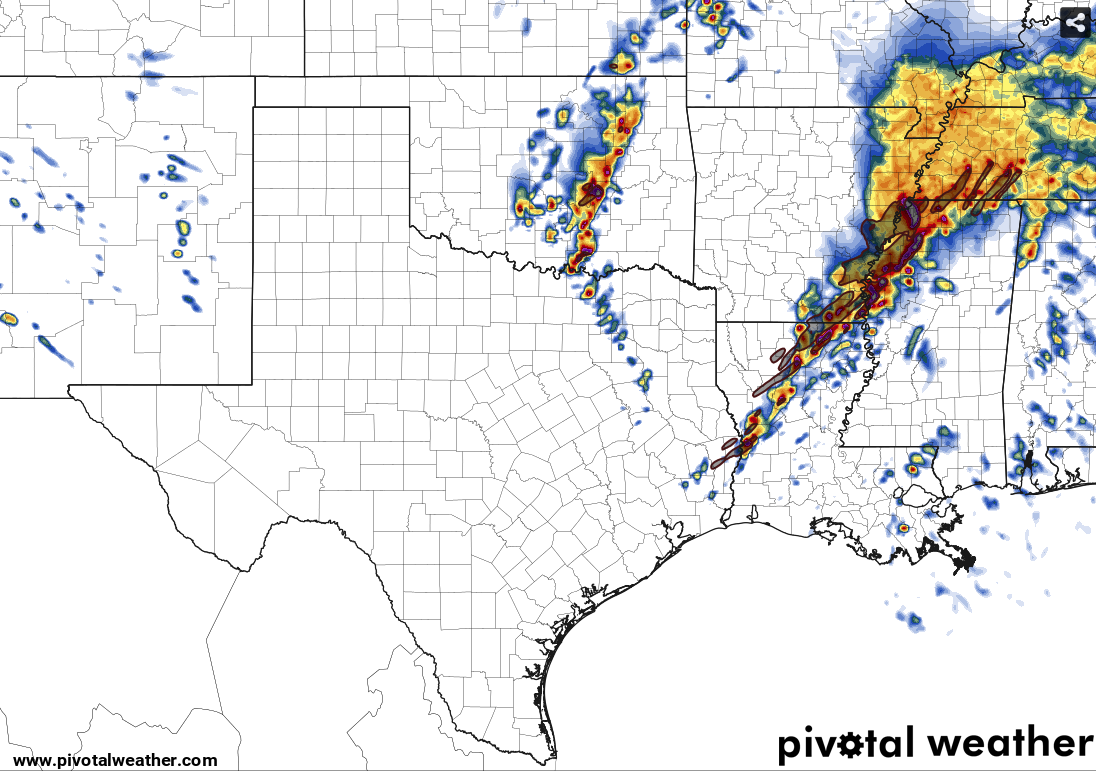 Again, the main questions in this corridor through this afternoon will be the degree of organization of the late morning-early afternoon convection, and its phasing with the surface warm front.

…MS/AL/GA/Carolinas late this afternoon through tonight…

To the south of the initial storm cluster crossing northern MS/AL/TN, a separate pre-frontal band of convection is expected to develop by late afternoon from southern MS into western/central AL. This convection will be well east the synoptic cold front, in an environment with surface-based buoyancy and very strong vertical shear. 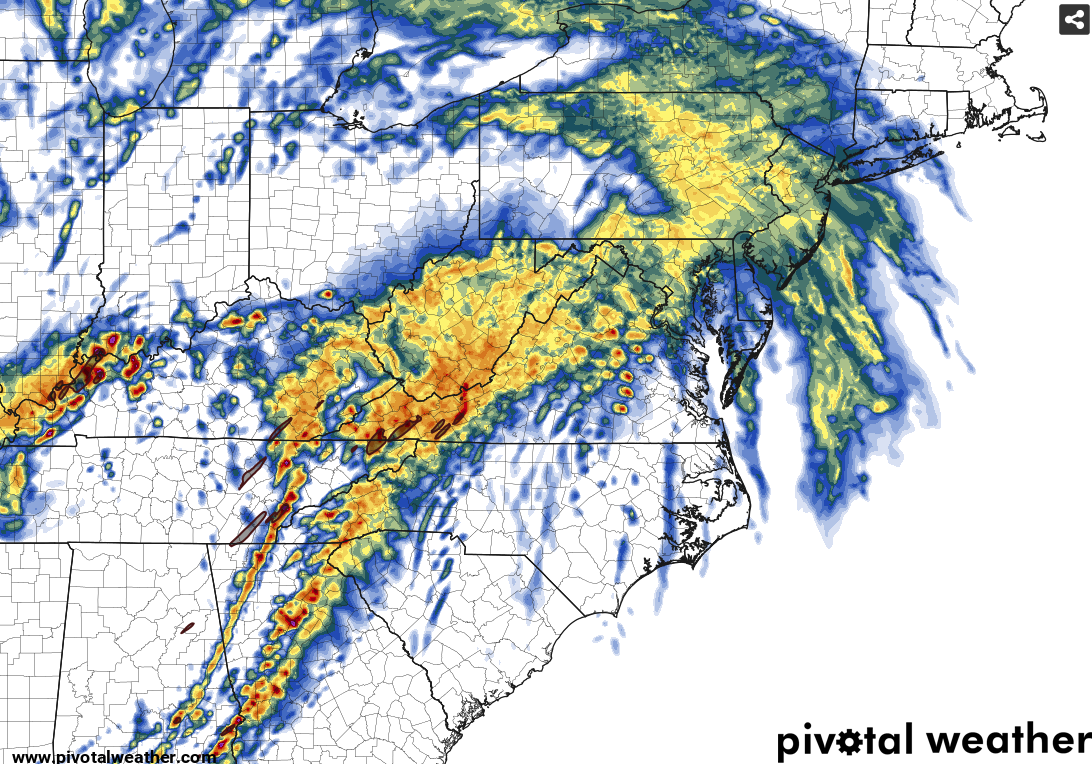 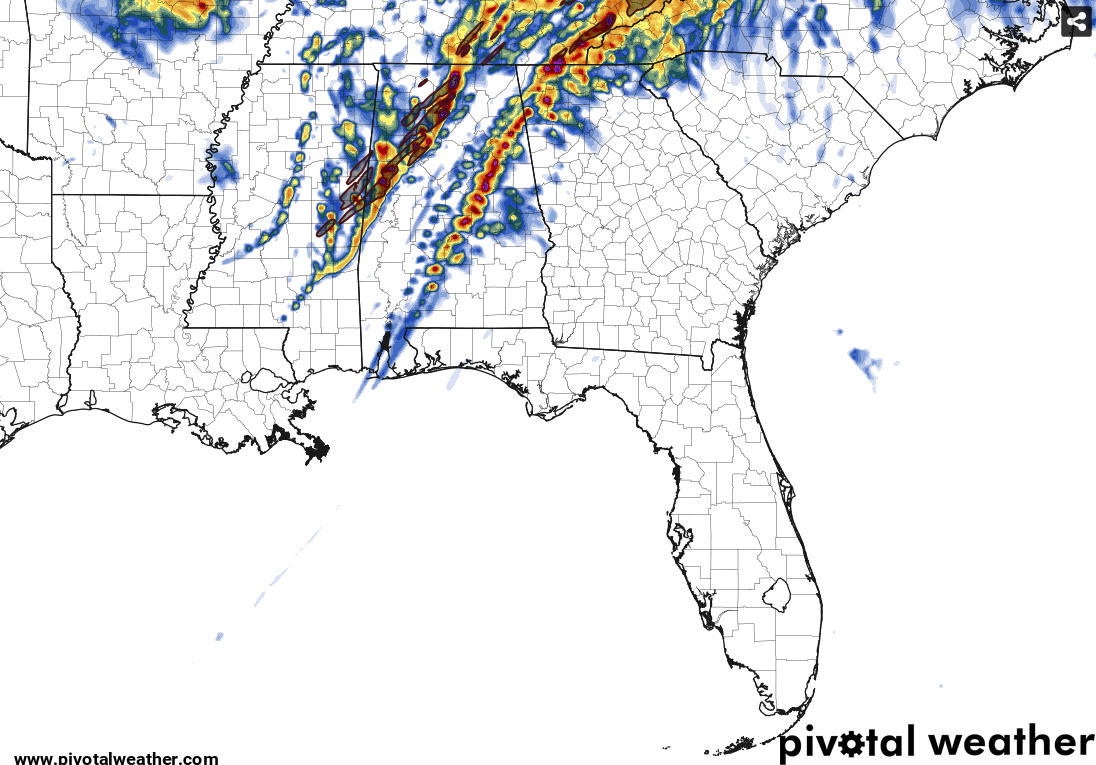 A broken band with embedded supercells appears likely to persist well into the overnight hours, with an associated threat for strong tornadoes and damaging winds. The pre-frontal convection should reach the western Carolinas by 09-12z.

…Red River Valley this afternoon to the OH Valley overnight…

An arc of convection will likely form this afternoon near the surface low in southeast OK, and within the left-exit region of the mid-upper jet.

This convection will subsequently spread eastward and northeastward into AR through late afternoon/evening.

The northward extent of destabilization in AR/western TN this afternoon/evening will depend largely on the intensity and extent of the early afternoon convection moving from LA into northern MS. 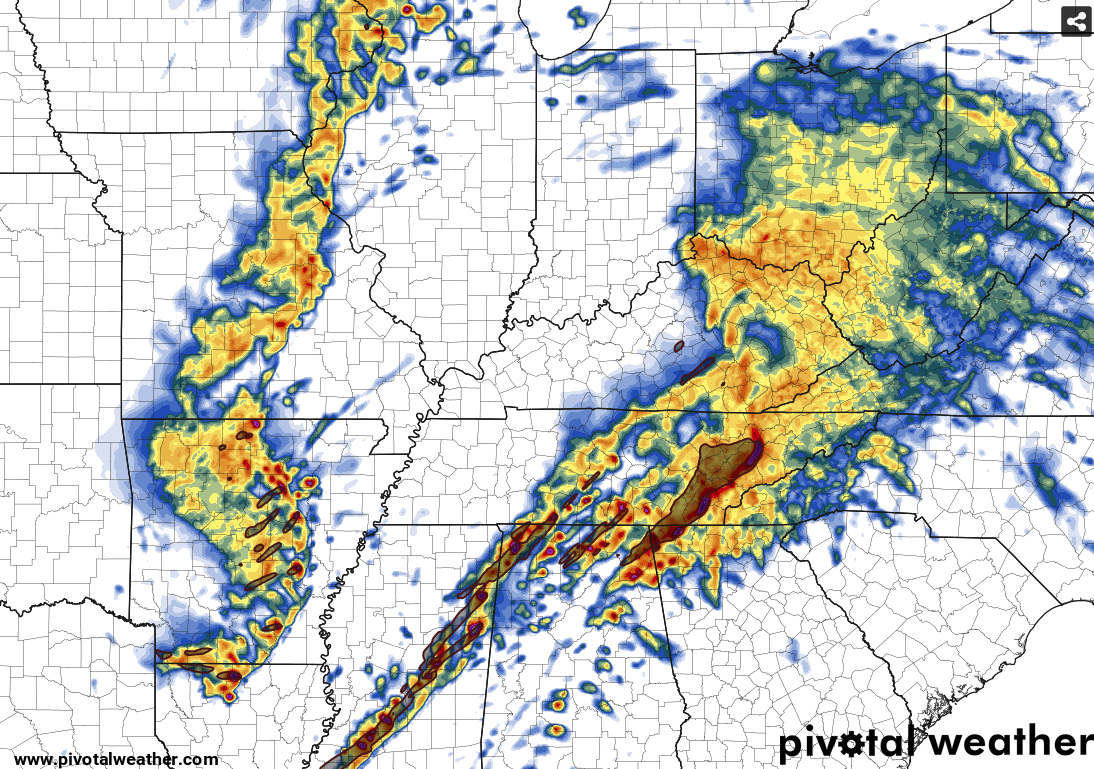 Similar to AR this afternoon, the northeast extent of the damaging wind and tornado threat into tonight will depend largely on how widespread/organized the convection is across northern MS/AL this afternoon/evening, and the degree of low-level recovery in the wake of that convection.