Tornadoes, Damaging Winds & Large Hail All Likely from Friday into Next Week

An 800,000-square-mile swath of the central United States will be at risk for rounds of severe thunderstorms, including the potential for tornadoes, starting late this week and continuing well into next week.

This several day outbreak will put at least 18 different states in the path of dangerous weather in the coming days. 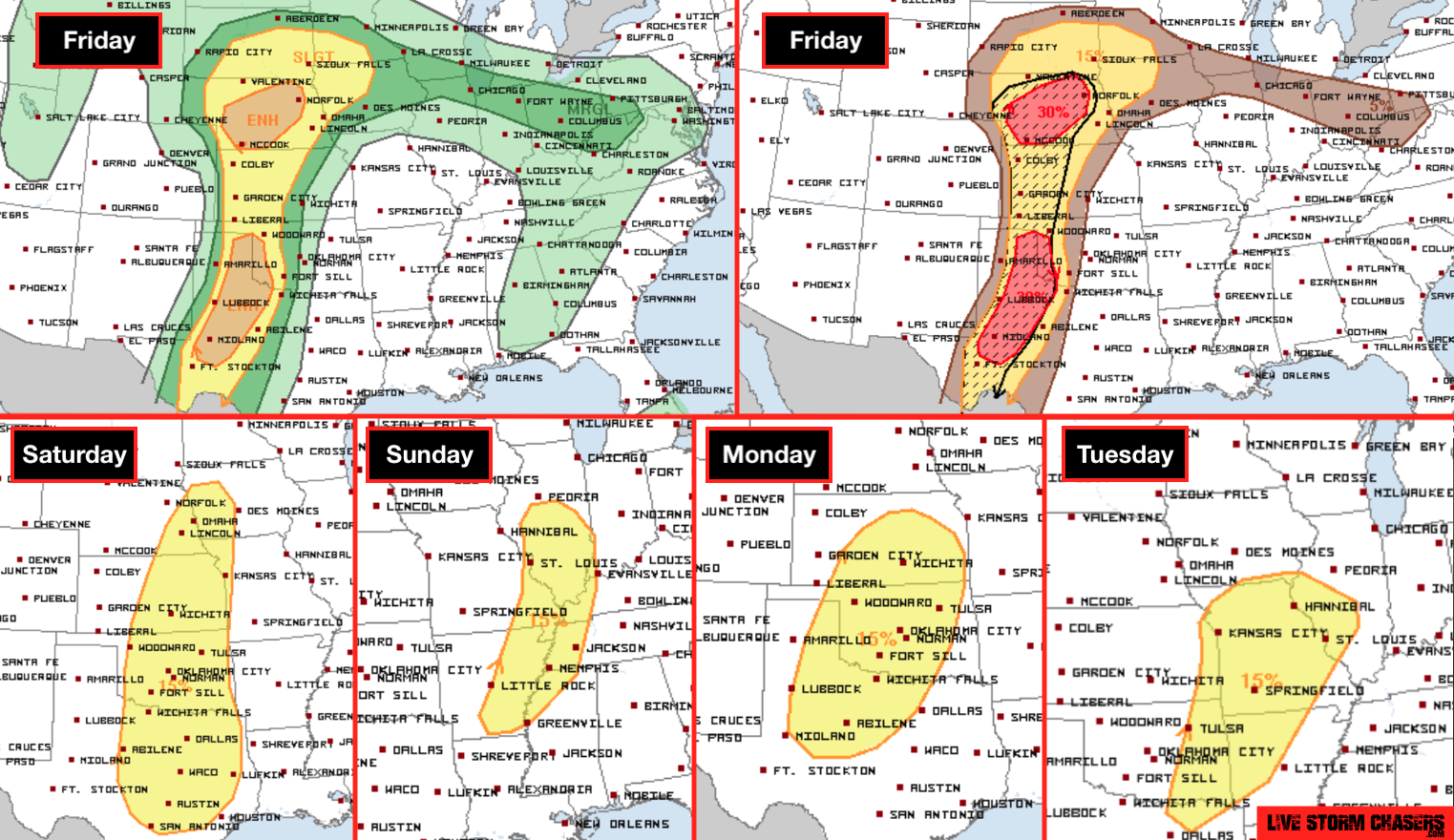 Given May’s reputation as the peak month for tornadoes in the U.S. and saturated soil from recent heavy rain in the Plains, this active pattern has our attention.

There is a risk area highlighted for severe weather every day on the Storm Prediction Center (SPC) day four through eight outlooks. This is the first time that has happened since that SPC product became operational in 2007, according to Harold Brooks, a senior scientist of the Forecast Research and Development Division, National Severe Storms Laboratory. (See attached tweet)

Pretty sure it’s the first time that all days on the day 4-8 have had contours drawn. Product became operational in 2007. https://t.co/aIAyongjHm

Be sure to stay tuned to our social media pages for the latest team coverage updates, live streams, videos/photos, & more!

WATCH & CONNECT With Us HERE

Severe thunderstorms with tornadoes, damaging winds, large hail and flooding rain will return to the Plains Friday, lasting into early next week, bringing an end to a relative lull in severe weather.

Typical for severe weather outlooks several days away, some uncertainty remains in this forecast, but some of the days ahead are becoming clearer.

Supercells and long lines of severe thunderstorms known as squall lines are both possible at times, with tornadoes, damaging winds, large hail, and heavy rain.

Here is our current forecast for now. Check back with us at livestormchasers.com for important forecast changes in the coming days ahead as the details become more clear.

The first widespread round of severe weather, which may evolve into a significant outbreak, is forecast to begin over the High Plains from eastern New Mexico and western Texas to southeastern Wyoming and southern South Dakota during Friday afternoon and evening

These storms have the potential to bring very large hail and isolated tornadoes, as well as wind gusts to 80 mph and highly localized flash flooding.

This activity may evolve into one or more overnight thunderstorm clusters from west-central Texas to Nebraska, South Dakota, southwestern Minnesota, and Iowa. Damaging winds and hail are the primary threats, but a few tornadoes could be embedded as well. 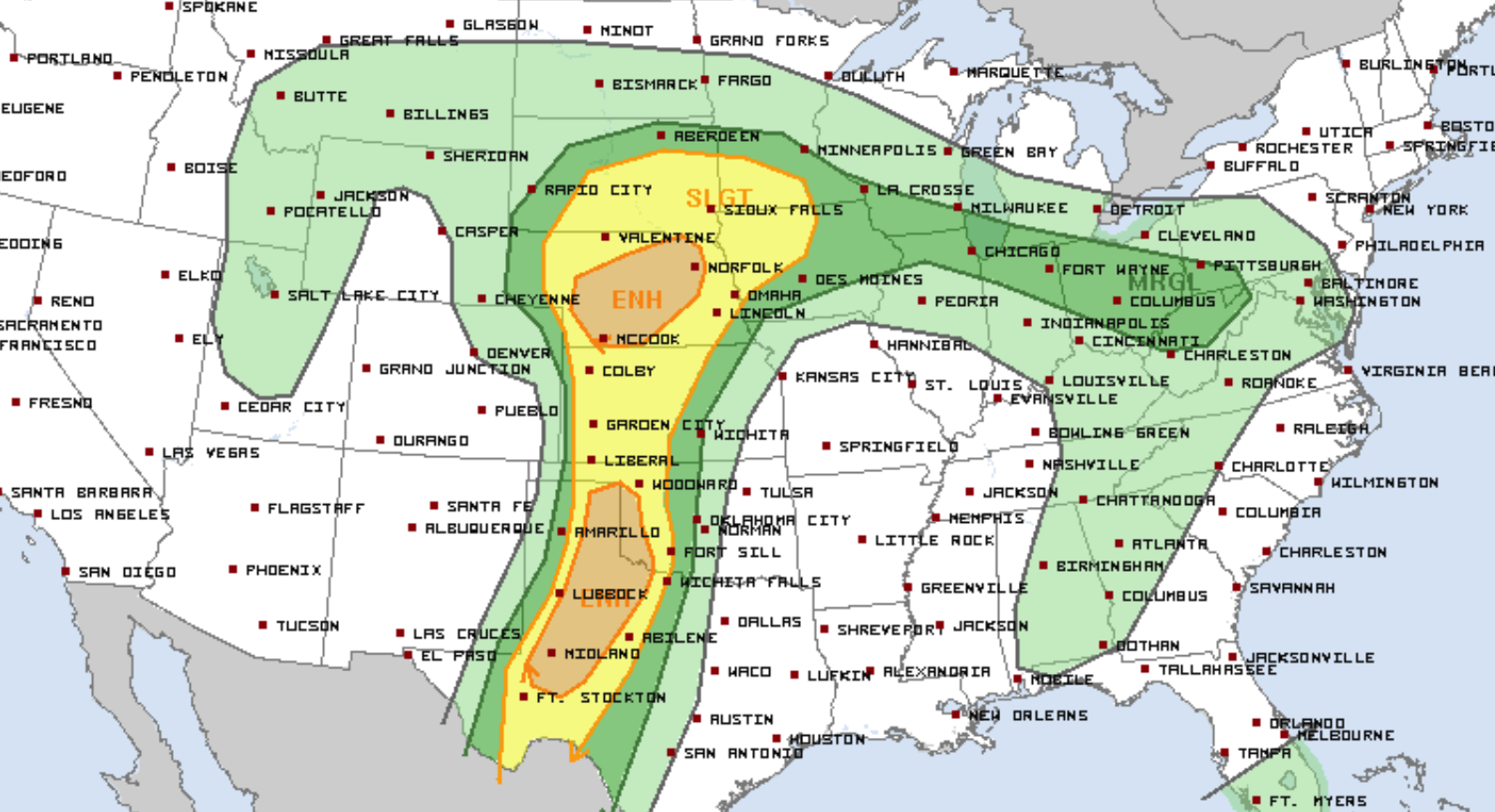 The threat for severe thunderstorms is forecast to extend from central and northeastern Texas to perhaps as far north as central Minnesota and southwestern Wisconsin during Saturday.

Damaging winds, large hail and a few tornadoes will all be threats from these storms.

Another concern on Saturday is heavy rain contributing to localized flash flooding in parts of the Plains. 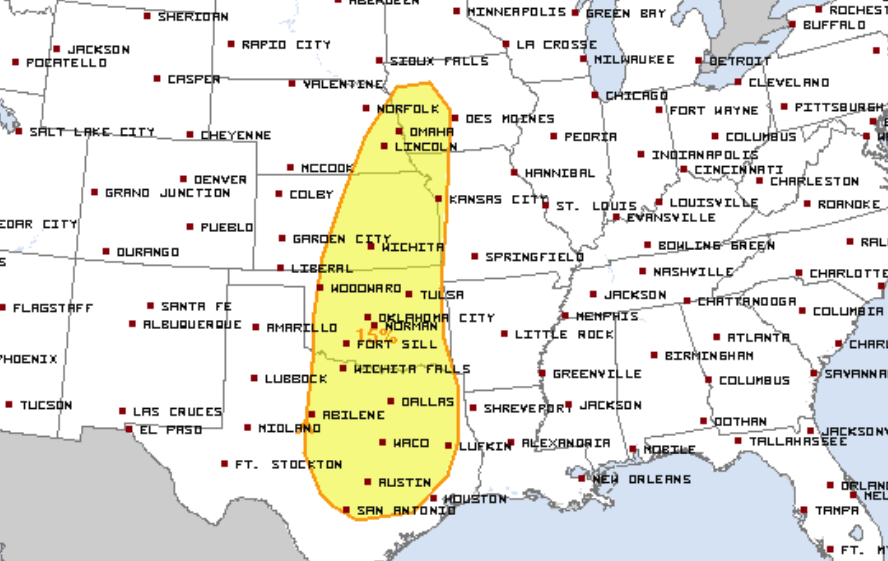 This is a more uncertain forecast, but at least some severe thunderstorms are possible from parts of the lower Ohio Valley to the lower and mid-Mississippi Valley and mid-South. Damaging winds and a few tornadoes could accompany severe storms that rumble through those regions. 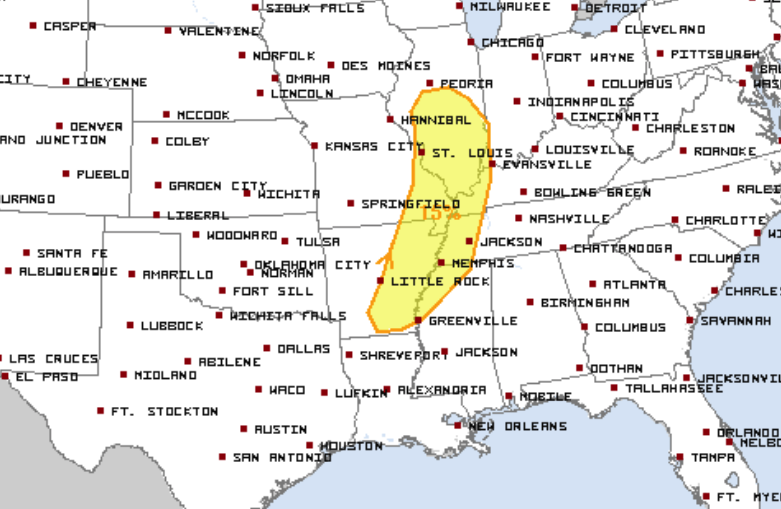 Another round of jet stream energy will emerge into the Plains on Monday, triggering the development of more widespread severe weather.

Scattered severe storms are possible Monday afternoon in the Plains from Kansas, perhaps southern Nebraska, to Oklahoma and parts of northwest and north-central Texas 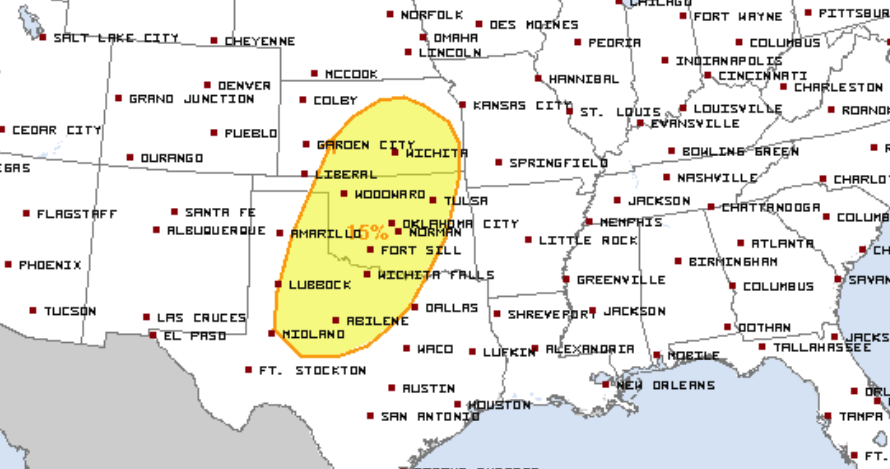 During Tuesday, the severe thunderstorm risk should once again advance eastward across the central and southern Plains and may reach from central Texas to northern Iowa and eastern Nebraska.

Similar to the round of severe weather into this weekend, the next round has the potential to produce tornadoes. However, the exact timing, nature and coverage of the storms may not be known until later this weekend. 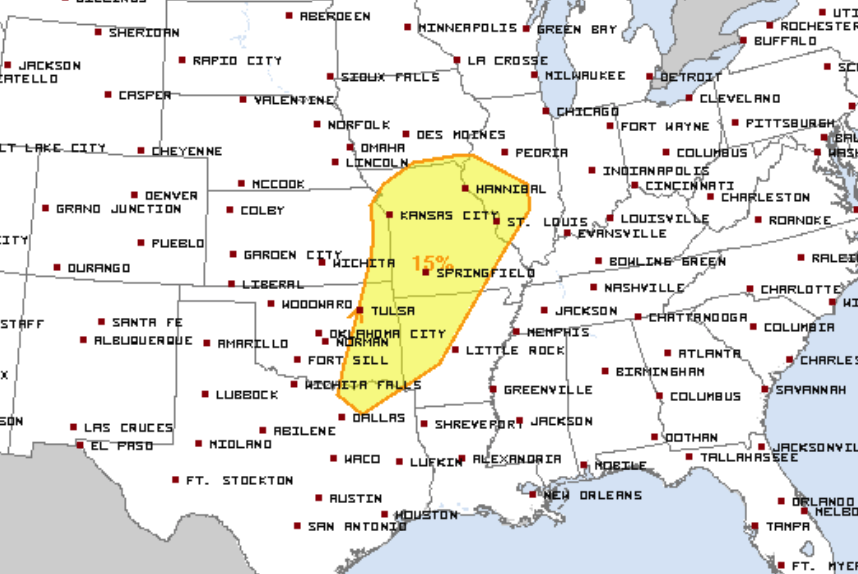 ? Best way to support us?

Become a supporter and get a badge, exclisve content and more TODAY for only $0.99 per month!