Large hail (some very large) and damaging winds (some significant). In addition, a few tornadoes cannot be ruled out.

UPDATED: Scattered to numerous severe thunderstorms capable of producing large hail and damaging winds, some significant, are expected from mid/late afternoon across the middle Mississippi Valley eastward into the Ohio and Tennessee Valleys through late tonight.

Aided by a notably amplifying trough over the Upper Midwest, generally strengthening west-northwesterly flow aloft in conjunction with an observed eastward-advecting plume of steep mid-level lapse rates, particularly across Iowa/Missouri and likely into southern portions of Illinois/Indiana and parts of Kentucky/Tennessee, will support a broad corridor of large hail/damaging wind potential this afternoon and tonight. 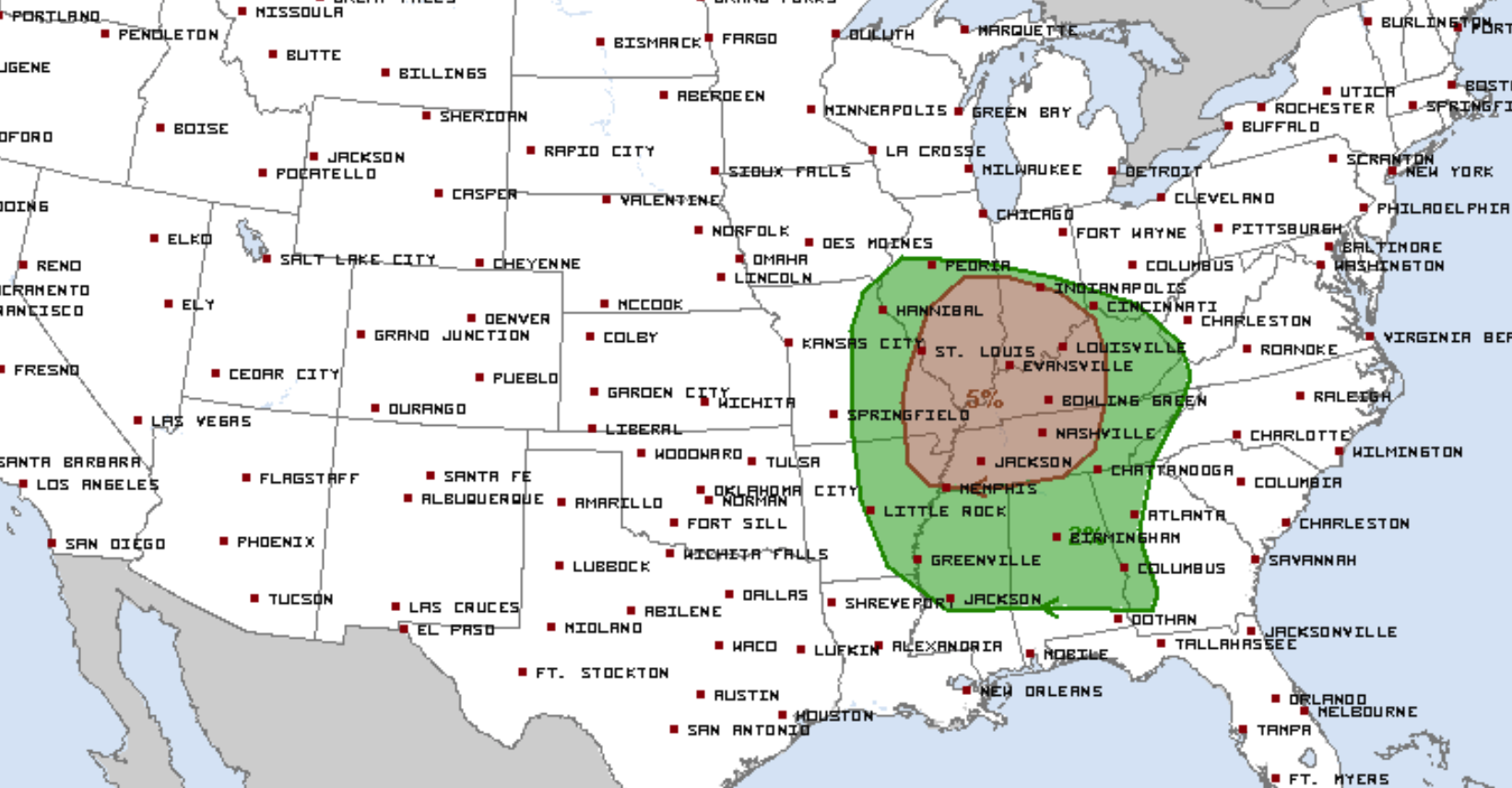 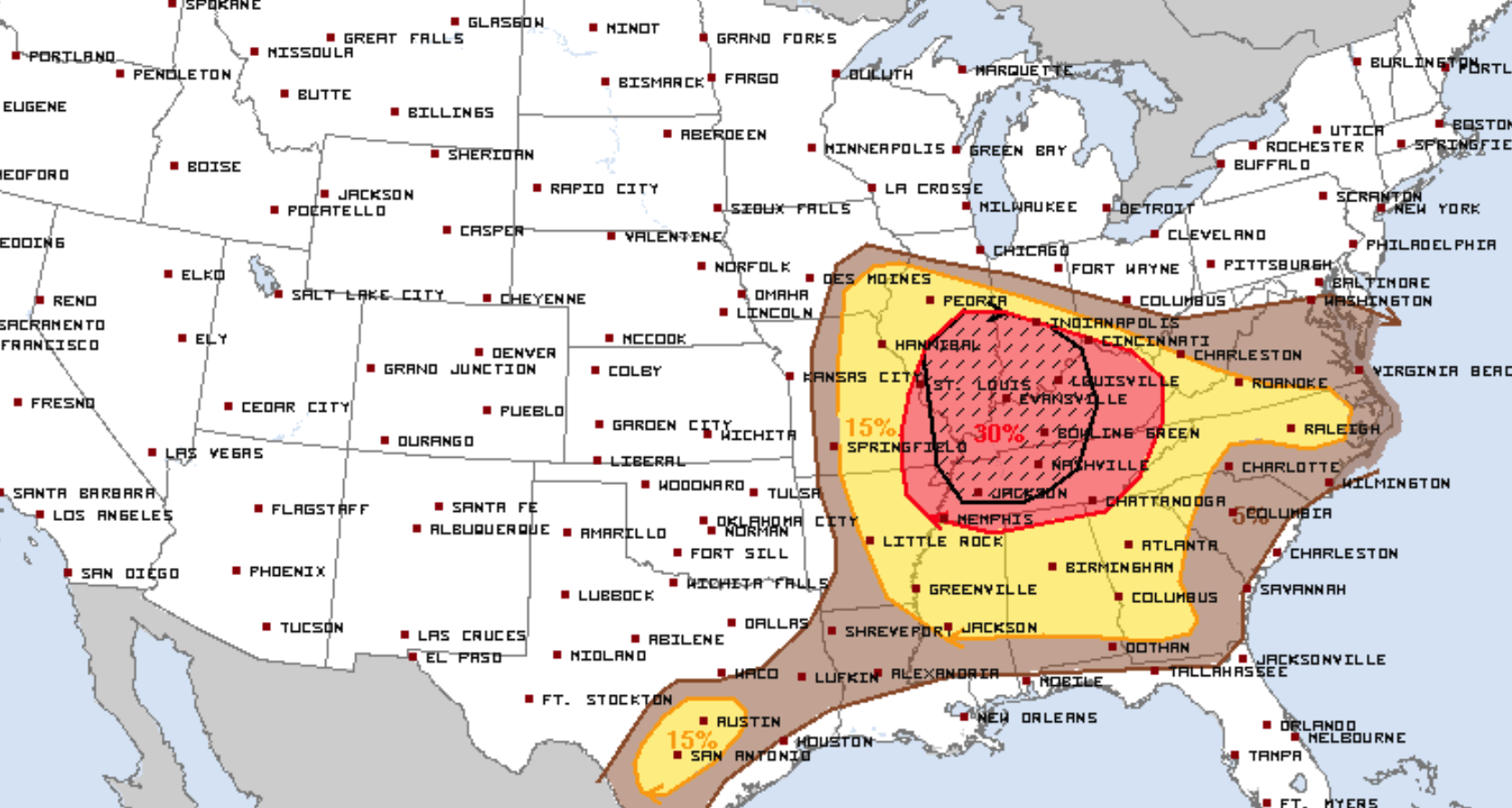 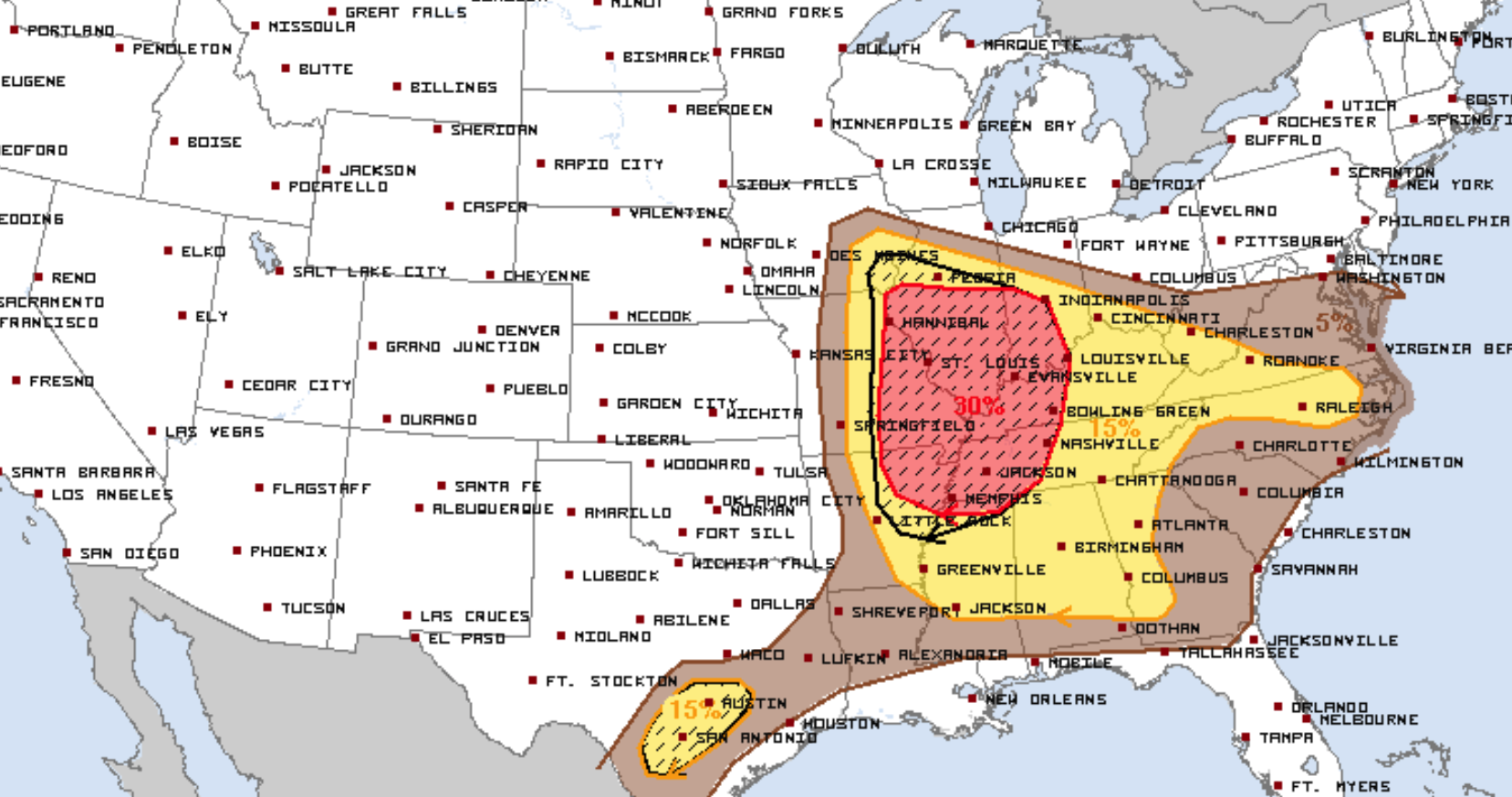 The region will be decidedly influenced by the southeastward-digging upper trough/jet streak over the Upper Midwest that will spread toward the Lake Michigan vicinity by evening, with an overlap of considerably strengthening winds aloft with a plume of steep mid-level lapse rates atop relatively rich early-April boundary-layer moisture.

A cold front will accelerate/steadily progress southeastward across the middle Mississippi Valley and Tennessee/Lower Ohio Valley through tonight. Ahead of this front, relatively rich low-level moisture with boundary-layer dewpoints in the upper 60s to lower 70s will continue to spread northeastward from the northwest Gulf coast to the Lower Ohio Valley today.

In particular, strong/severe thunderstorm development is anticipated by early-mid afternoon initially across east-central/southeast Iowa as height falls with the northern stream trough (and a lead speed max) begin to interact with the more marginal moisture on the northwest edge of the unstable warm sector.

The initial storms will likely evolve into supercells capable of producing very large hail into Illinois. Convection will subsequently spread east-southeastward through the evening along the instability gradient across central/southern portions of Illinois/Indiana, and likely grow upscale into a larger cluster with increasing damaging wind potential.

Farther south, additional storm development is also likely along and ahead of the cold front, starting late this afternoon in the vicinity of southeast Missouri. Large buoyancy (MLCAPE of 3000 J/kg or larger) is likely from southeast Missouri eastward as boundary-layer dewpoints near 70 F spread northeastward beneath 8-9 C/km mid-level lapse rates.

Deep-layer vertical shear will initially be a little weaker in this corridor between the amplifying northern stream and a southern stream from Texas to the Southeast, but the large buoyancy/steep lapse rates and increasing deep-layer flow/shear by this evening will favor a mix of supercells and growing clusters capable of producing very large hail and damaging winds.

Like the initial convection farther north in Illinois/Indiana, upscale growth into an extensive QLCS appears likely this evening across the Tennessee and Lower Ohio Valley regions, with an increasing threat for fairly widespread damaging winds.

A couple of tornadoes may also occur with the initial discrete cells or with embedded circulations in the later QLCS as low-level shear increases this evening/overnight and moderate-strong buoyancy is maintained through the late-night hours.

…Southern WV to the VA/NC border this afternoon/evening…

Outflow continues to surge southward late this morning while weakening across North Carolina.

Gradual air mass recovery will occur near/south of a differential heating zone near the Virginia/North Carolina border vicinity. Storms are likely to initially develop/intensify across southern West Virginia and in vicinity of the Appalachians spine.

Initially elevated storms continue to develop/slowly increase across far southern Arkansas late this morning, a probable precursor for additional clusters of thunderstorms that are expected to develop and move east-southeastward this afternoon across north-central portions of Mississippi/Alabama into southern Georgia.

This development will be along the eastern edge of the richer moisture (dewpoints near 70 F) and within the right-entrance region of the mid/upper jet, in conjunction with thinning clouds/daytime heating and a weakening of convective inhibition. 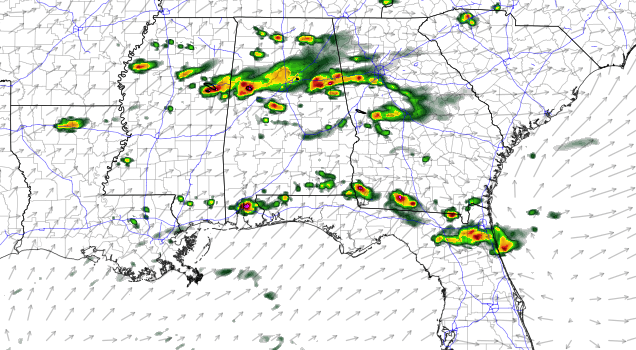 Modest convergence in vicinity of an eastward-mixing dryline should focus at least isolated thunderstorm development generally around the I-35 corridor this afternoon as convective inhibition weakens and buoyancy becomes very large. Upwards of 3500-4000 J/kg MLCAPE is expected by mid/late afternoon in the presence of lower 70s F surface dewpoints. Despite weak low-level flow/shear, effective bulk shear around 50 kt and ample moisture/MLCAPE will support supercells capable of producing isolated very large hail and locally damaging winds this afternoon/evening. 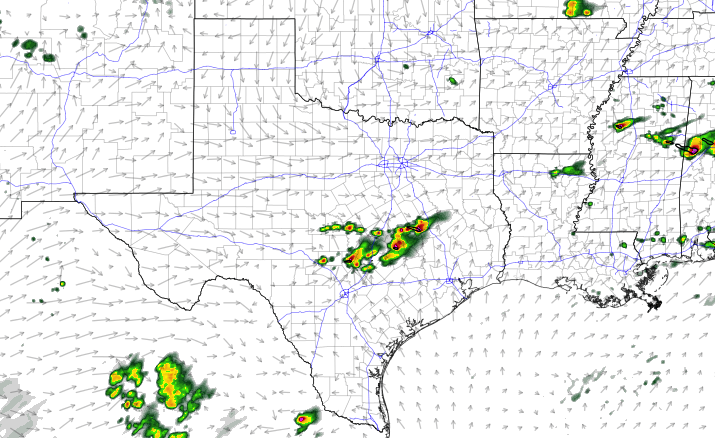