If it crashes onshore as strong as predicted, Florence may rival or exceed the Carolinas’ biggest storm surges on record.

The only hope right now is that Florence undergoes an eyewall replacement cycle just before landfall and weakens a bit. As far as inland flooding goes, we’re done talking inches of rain, it’s going to be feet of rain in a lot of locations. The East coast is going to get their version of Harvey but the flooding is going to cover about 10-15 times the area that Harvey did.

Landfalling Category 4 hurricanes are rare in the mainland U.S., with just 24 such landfalls since 1851—an average of one every seven years. (Category 5 landfalls are rarer still, with just three on record). All but three of these 27 landfalls by Cat4s and Cat5s have occurred south of South Carolina’s latitude; thus, Florence will be in the very select company if it manages to make landfall at Category 4 strength in North or South Carolina.

If Florence hits the coast of North or South Carolina as a Category 3 or stronger hurricane, we should expect to see record storm surge heights, with a 15 – 20’ surge very possible. The track of Hurricane Florence, combined with its expected size and strength at landfall and the unique coastal geomorphology of the region, is likely to result in a record storm surge along portions of the warning area. With that said we could definitely see a 20+ foot storm surge/storm tide in the Carolinas. Even if Florence weakens a bit in the time right before landfall, the surge heights correlate better with the pre-landfall winds than the winds at landfall. 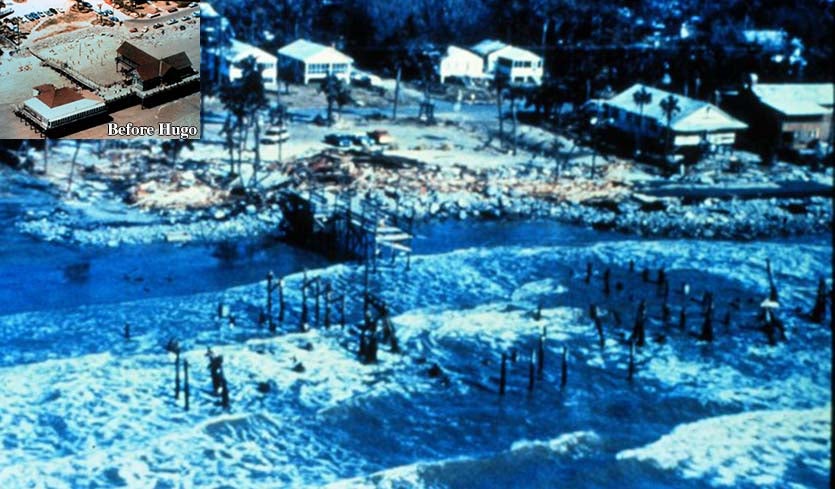 It’s a good thing that landfalls by such strong hurricanes are rare along the South Carolina and North Carolina coast since this coastline is extremely vulnerable to high storm surges. Two of these three historical Carolina Category 4 hurricanes generated a storm tide of 18 – 20 feet: Hugo of 1989 and Hazel of 1954. The other storm–Gracie of 1959–did not (it hit at low tide, significantly reducing the coastal flooding). The storm tide is the combination of the storm surge and the normal lunar tide, measured in height above sea level. The National Hurricane Center uses the terminology “height above ground level” when discussing the storm tide, meaning the height the surge plus tide gets above the normal high tide mark.

The high vulnerability of this coastline is because the continental shelf extends out more than 50 miles from shore, creating a large region of shallow water less than 150 feet deep just offshore that forces storm surge waters to pile up to staggering heights