A few tornadoes, a couple possibly strong, and significant damaging winds will be likely across southeast Iowa through central Illinois, mainly this evening.

There is an Enhanced Risk issued  by the Storm Storm Prediction but an upgrade to a Moderate Risk for tornado and/or wind may become necessary in later outlooks today. 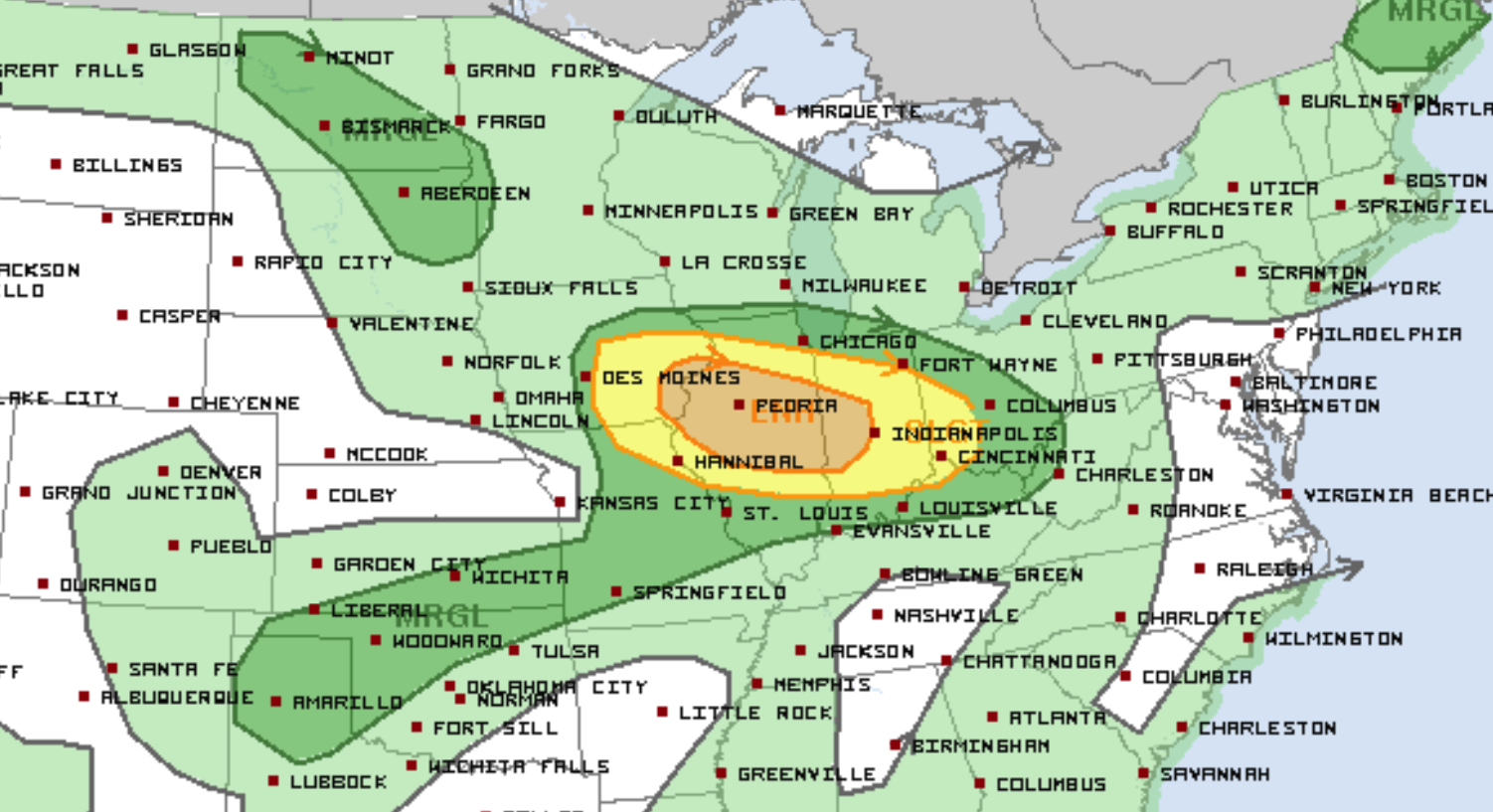 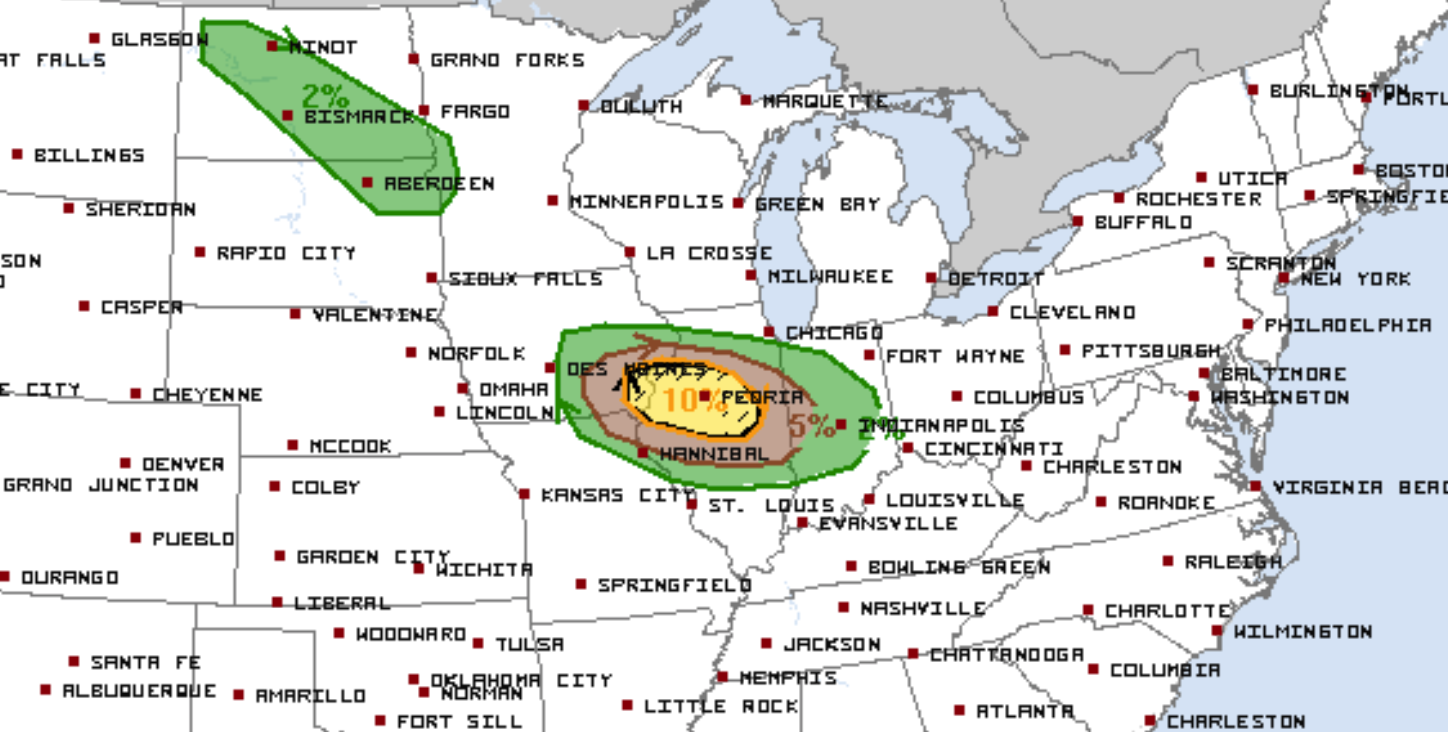 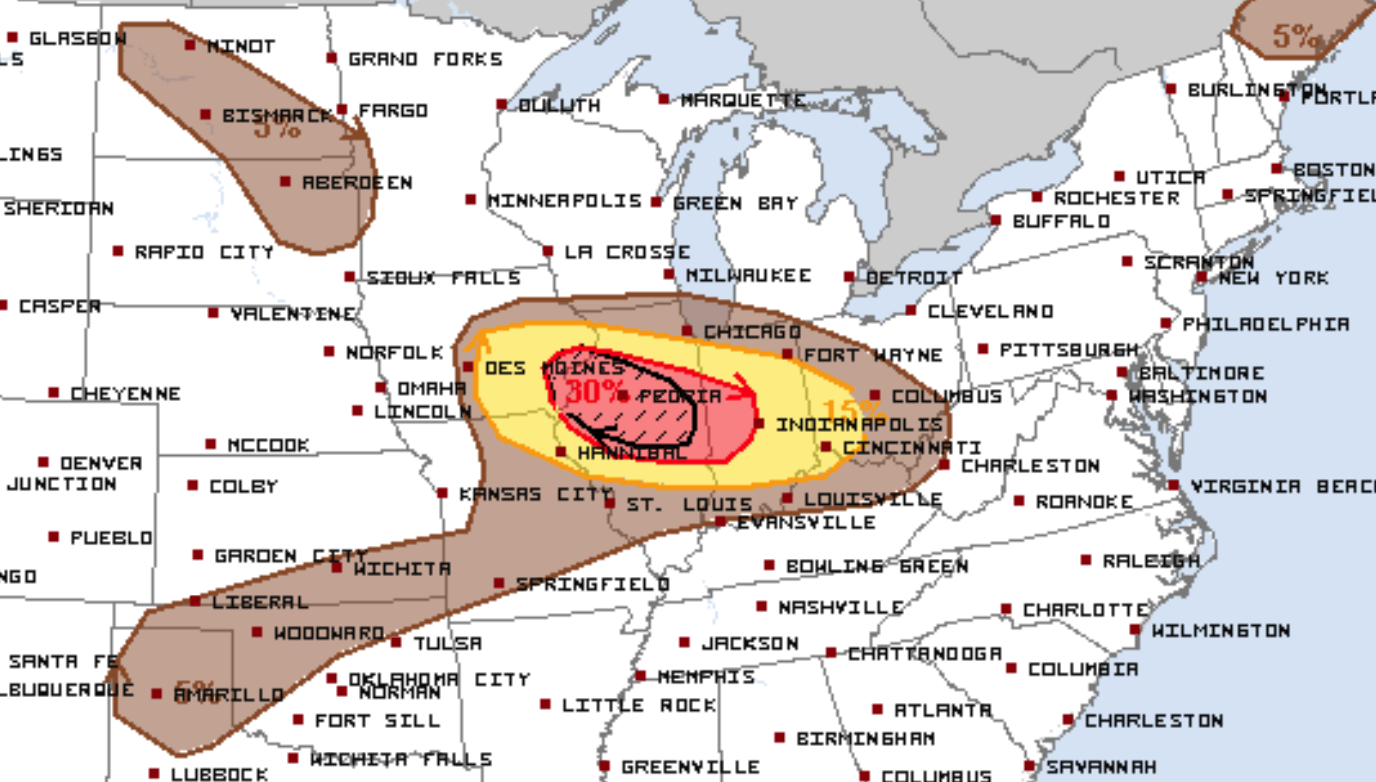 leading MCV is tracking east into eastern IA with a lingering surface cyclone centered over west-central IA. This latter feature should move east into northern IL through this evening. Diffuse convective outflow from remnant leading MCS over southern IL has been shunted across southeast to northwest MO.

Nevertheless, air mass recovery is underway north of the boundary into extreme southern IA and west-central IL. Further erosion of the prior cold pool amid cloud breaks should yield at least weak to moderate surface-based buoyancy by late afternoon in IA to northern IL.

More robust destabilization is expected farther south where greater unimpeded insolation occurs while a plume of 77-81 F surface dew points is advected north from the Mid-South. Despite relatively warm mid-level temperatures, the very rich boundary-layer moisture and surface heating should yield a plume of large buoyancy with MLCAPE likely reaching 3000-4000 J/kg across much of MO into central/southern IL.

Renewed thunderstorm development is probable towards late afternoon near the surface cyclone in southeast IA and during the early evening to the southeast in central IL within a corridor of strengthening low-level warm advection.

The initial storms will likely be supercells capable of producing all hazards, given the enhanced low-level shear/hodograph curvature near the cyclone/warm front. Hodographs aloft should tend to favor relatively quick upscale growth, but even semi-discrete supercells will pose a risk for at least a few tornadoes, a couple of which be may strong. A forward-propagating MCS should eventually evolve along the MLCAPE gradient from central IL into central IN where severe wind gusts will remain a threat before weakening overnight.

A remnant midlevel trough will drift slowly east-northeastward over the TX Panhandle, as a weak cold front moves slowly southeastward from KS/CO. Surface heating and deep mixing will result in inverted-v profiles along and south of the front, and will support the potential for isolated strong downburst winds. Convection will tend to develop east-northeastward tonight along the front, with strong downdrafts still possible in an environment of lingering large CAPE/DCAPE.

A midlevel trough over James Bay will pivot east-southeastward to Maine overnight. In advance of this trough, a weak pre-frontal trough at the surface and band of weak ascent will provide a focus for thunderstorm development this afternoon. Though moisture and lapse rates will be modest, increasing deep-layer westerly shear and surface heating on the south edge of the thicker clouds could support storms capable of producing isolated damaging gusts and marginally severe hail.

Widespread clouds and rain are spreading slowly eastward across the eastern Dakotas in association with a couple of diffuse MCVs from overnight convection. A little clearing of clouds and surface heating will be possible from west to east this afternoon, in advance of a larger-scale trough moving east-southeastward from MT to ND. Isolated thunderstorm development and a low-end severe threat will be possible this afternoon if sufficient near-surface destabilization occurs, given enough vertical shear for organized storms.