A severe weather outbreak is expected for portions of the Midwest this afternoon and evening including possible Strong Tornadoes!

A few long-tracked, significant tornadoes are possible, along with large, damaging hail and severe gusts. 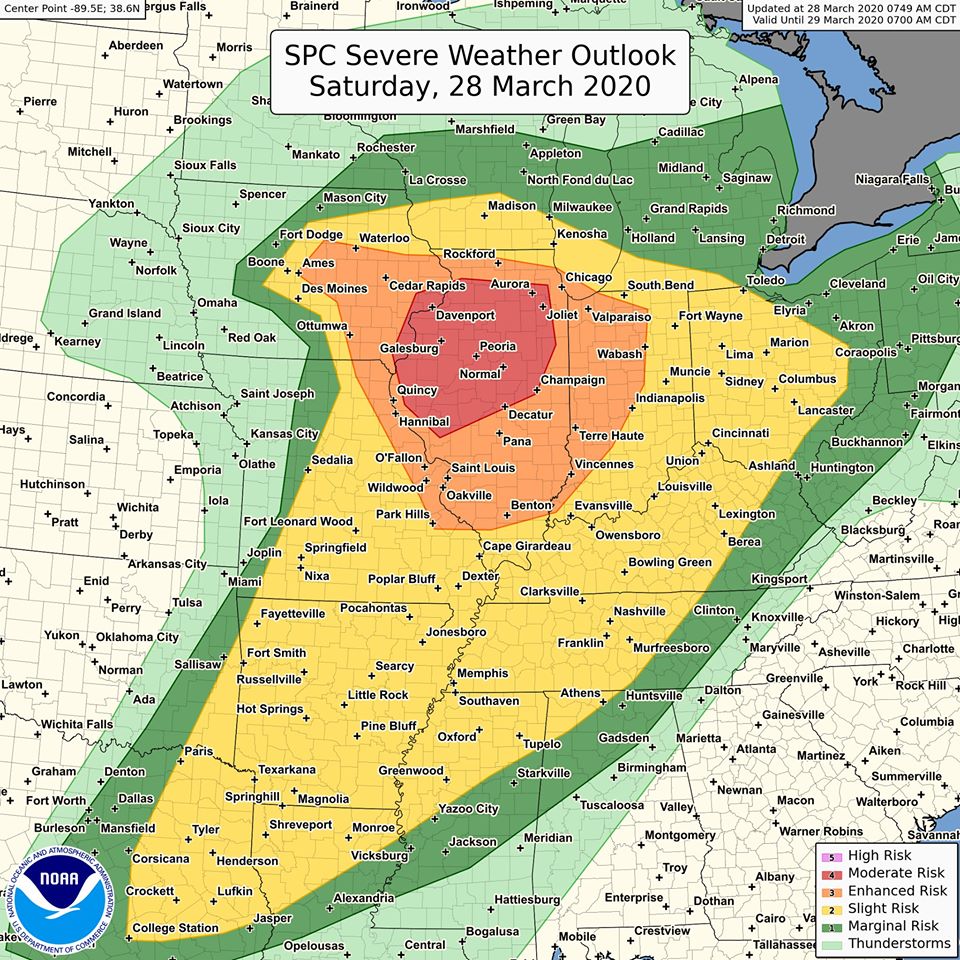 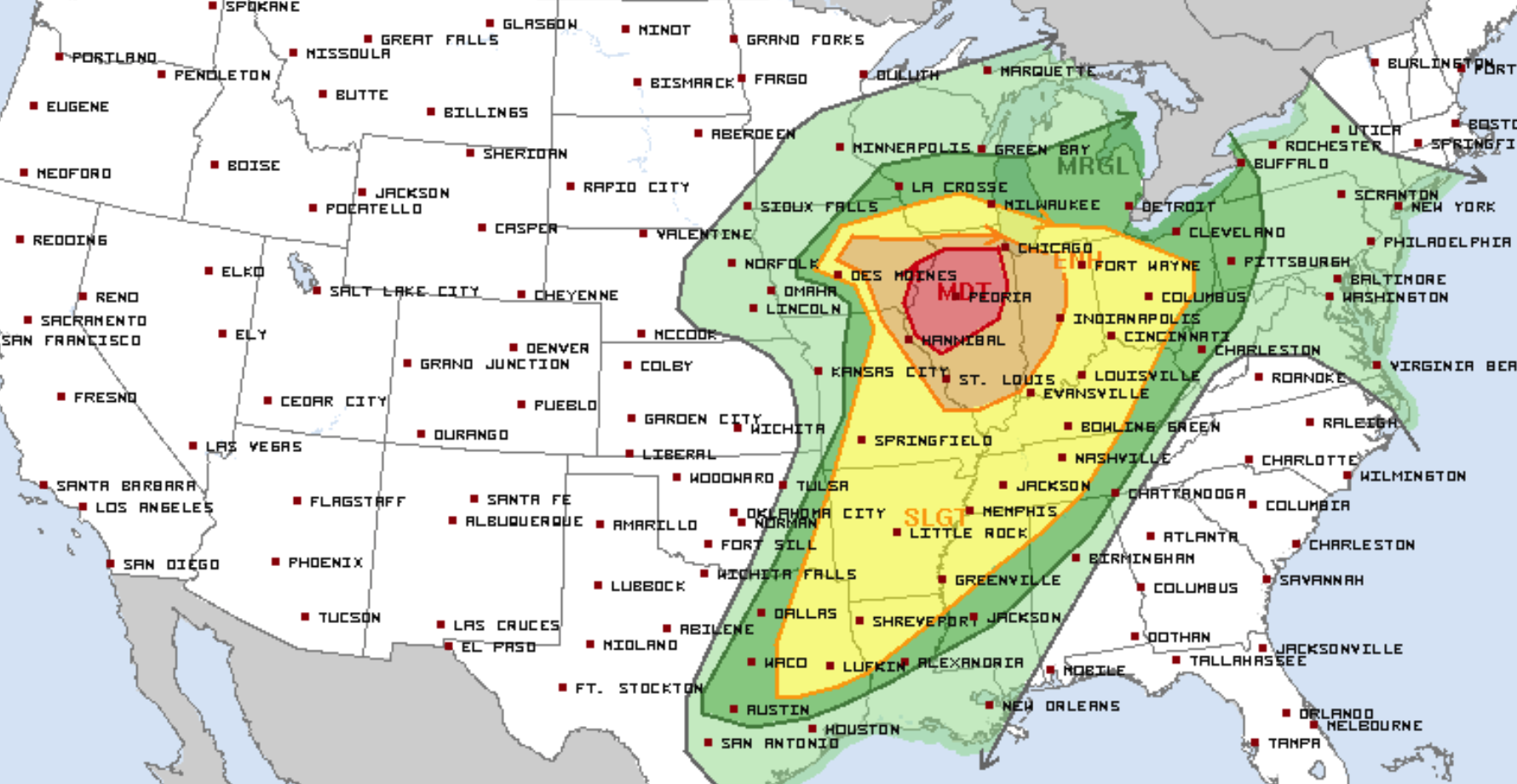 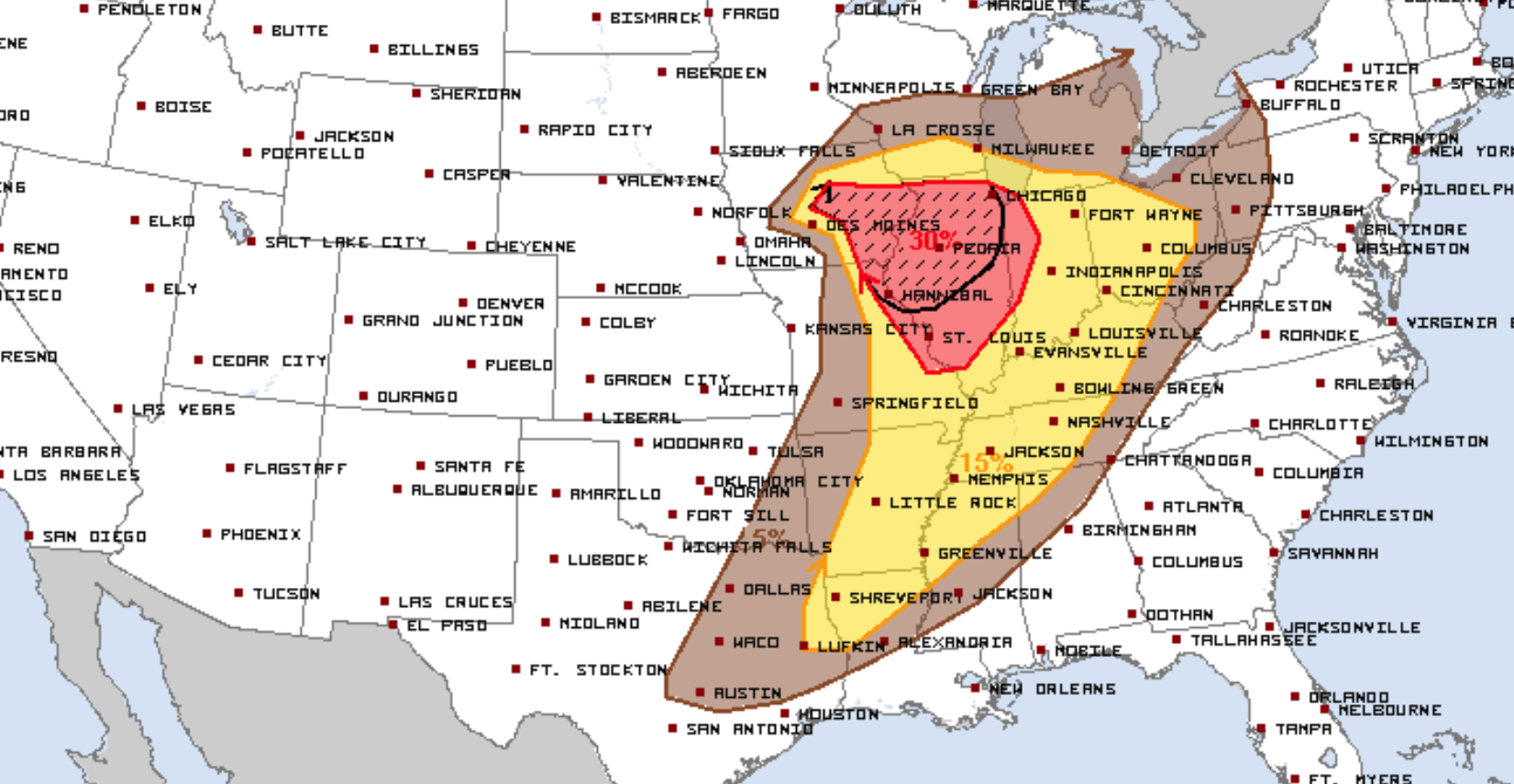 A progressive mid/upper-level pattern will remain in place over the CONUS through the period, featuring a strong synoptic trough now extending from a 500-mb cyclone over the central High Plains south-southwestward over eastern NM to Chihuahua.

The cyclone aloft will strengthen and move northeastward to western IA by 00Z, with trough southwestward over west TX. For the remainder of the period, the cyclone will become vertically stacked with its low-level circulation, moving northeastward to southern WI by 12Z tomorrow. At the surface, 11Z analysis showed the main surface low near HUT, with Pacific cold front arching across central OK, western north-central TX, the Edwards Plateau, and northern Coahuila.

The Pacific cold front superficially will exhibit some dryline characteristics, but with definitive baroclinicity, as it sweeps across the lower Missouri and mid Mississippi Valleys today into this evening. By 00Z, the front should reach extreme eastern IA, western IL, eastern/southeastern MO, central AR, northern LA, and southeast TX. By 12Z, the front should reach western OH, middle TN and near the central part of the LA coastline.

The warm front will move northward across eastern IA, northern parts of IL/IN/OH, and parts of western PA by 00Z. Further northeastward advance of this boundary over PA likely will be prevented until day 2, but by 12Z, it should reach the shore of Lake Erie in OH.

Scattered thunderstorms are expected to form in episodic arcs from midday through this evening across parts of central/eastern IA, eastern MO, IL, and IN, moving northward to northeastward generally at 45-60 kt. This will include supercells with tornadoes (some long-tracked and significant at EF2+ damage levels), large and sometimes very large hail, and occasionally severe non-tornadic gusts. 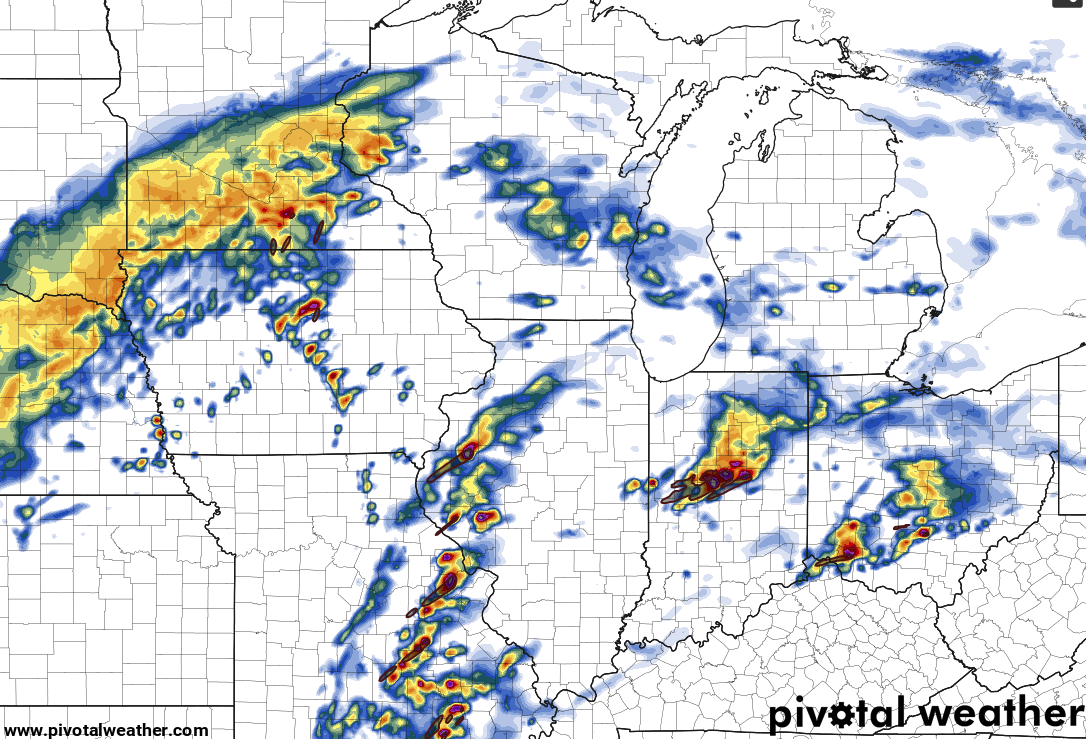 Given the fast storm motions, any tornadoes that do form may persist for nearly as many miles as minutes of time — at least, until supercells cross more than a short distance into what should be a very sharp warm-frontal zone. Intense deep-layer winds and low-level shear will be present, with 60-80 kt effective-shear magnitudes, amidst 90-100 kt of 500 mb flow, under and near a 150-kt 250-mb jet.

Long, somewhat curved hodographs are forecast, yielding warm-sector effective SRH of 200-400 J/kg, but higher along the immediate warm front where storm-residence time will be brief. A zone of favorable destabilization — narrowing with northwestward extent from IL and eastern MO into central IA — is forecast following morning clouds/precip, as diurnal heating and steep midlevel lapse rates overspread a plume of moist/warm advection just ahead of the Pacific front. 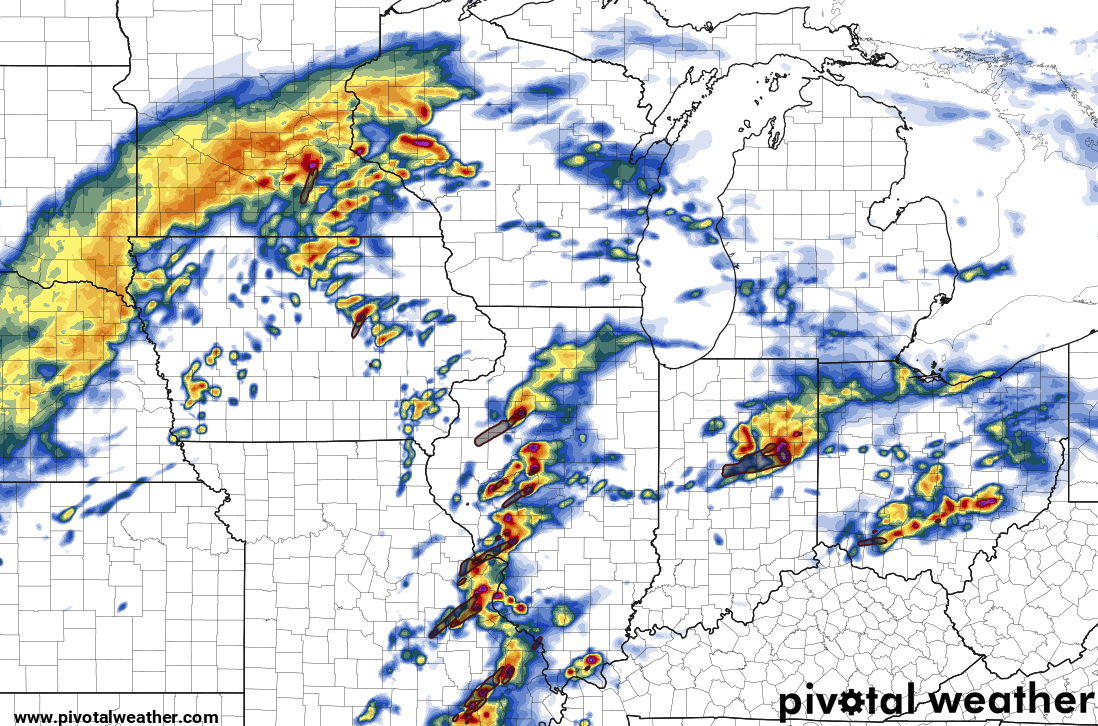 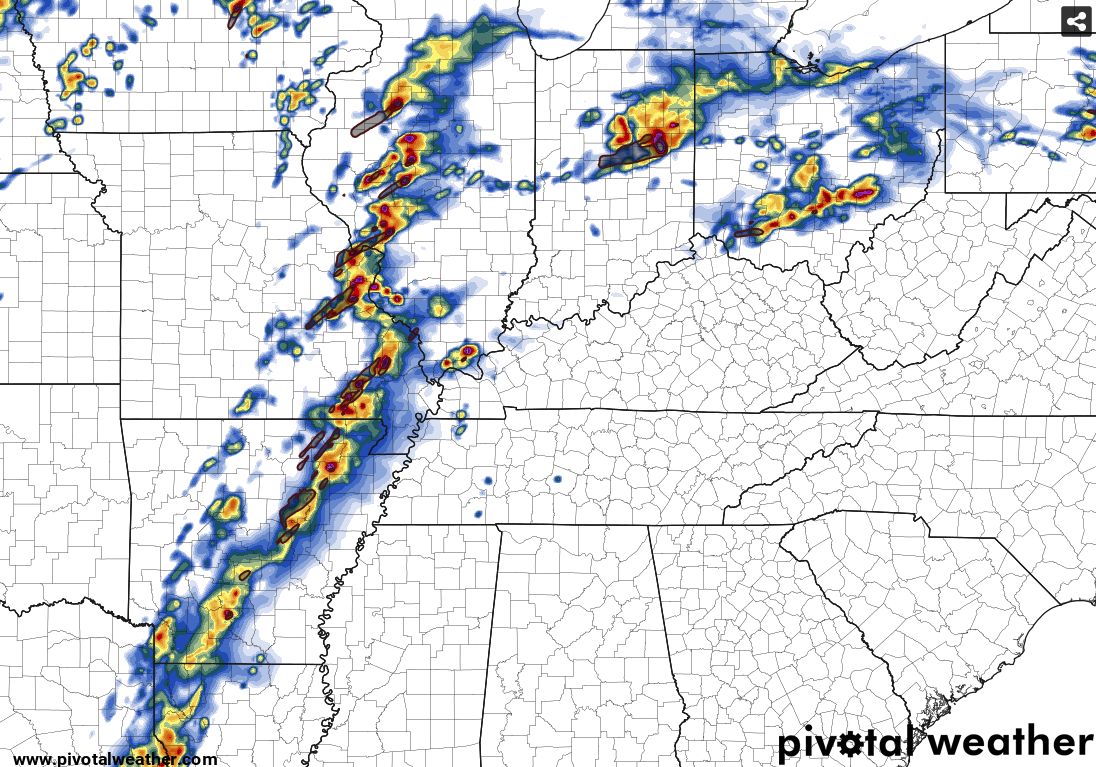 Additional supercells may form in the warm sector over IL and move into IN, also offering potential for significant tornadoes/hail and damaging wind before this part of the event wind down in the evening. Given that some uncertainties remain regarding the duration and width of destabilization across this region with respect to forecast rapid supercell motion across the warm sector, and regarding coverage of supercells, we are holding the probabilities to those supporting a categorical “moderate” threat at this time.

This does not preclude the potential for a tightly targeted area of higher probabilities during the day if mesoscale developments warrant. 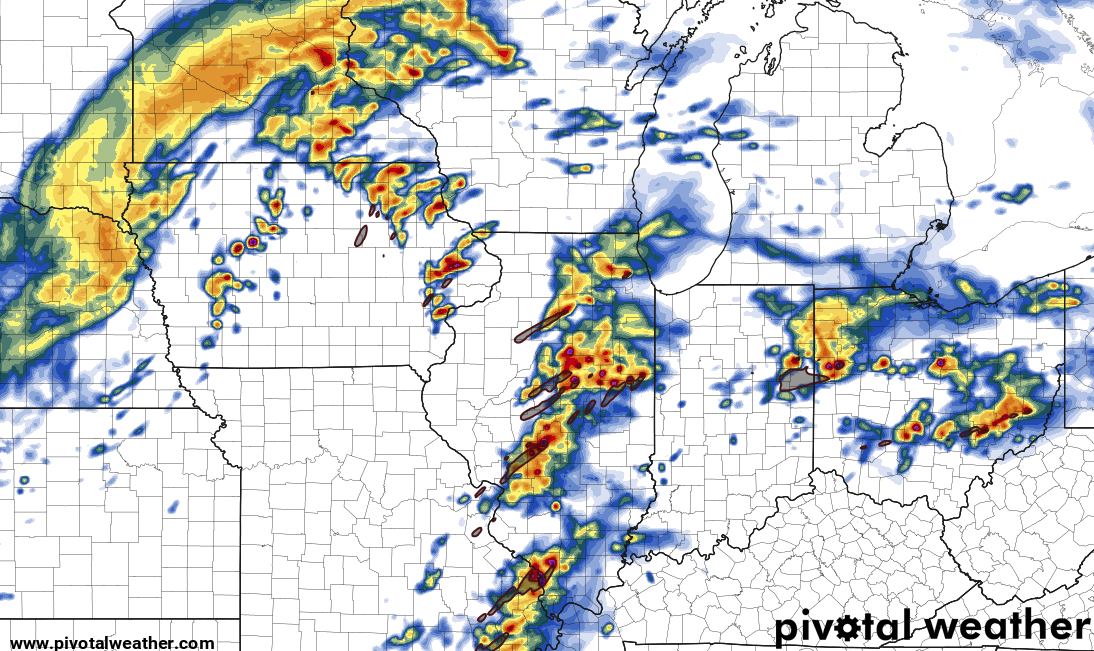 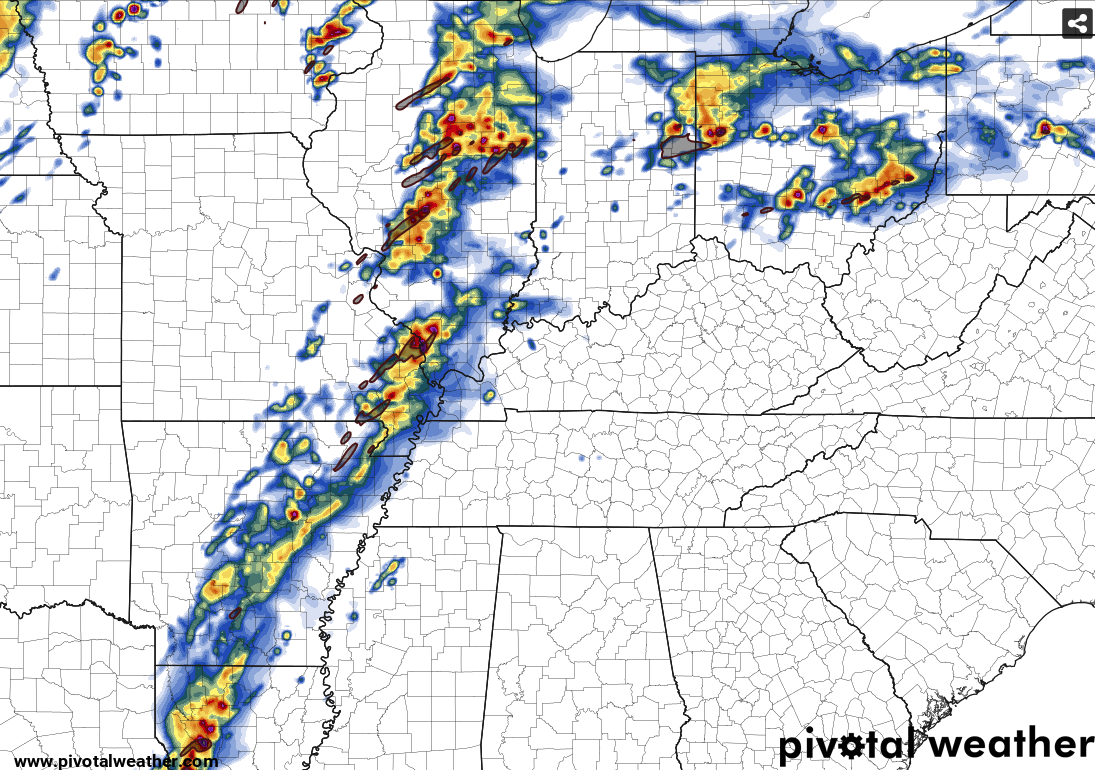 See SPC mesoscale discussion 246 for near-term coverage of a marginal severe threat with ongoing convection across portions of central/north-central TX, near the Pacific front.

Peripheral severe-outlook areas have been expanded southwestward into most of east TX to account for the increasing potential of development through afternoon along/ahead of the Pacific front, as well as more of southern MO and eastern OK on conditional potential for ongoing convection now in parts of central OK to produce isolated strong-severe hail and gusts into those regions in the next few hours. 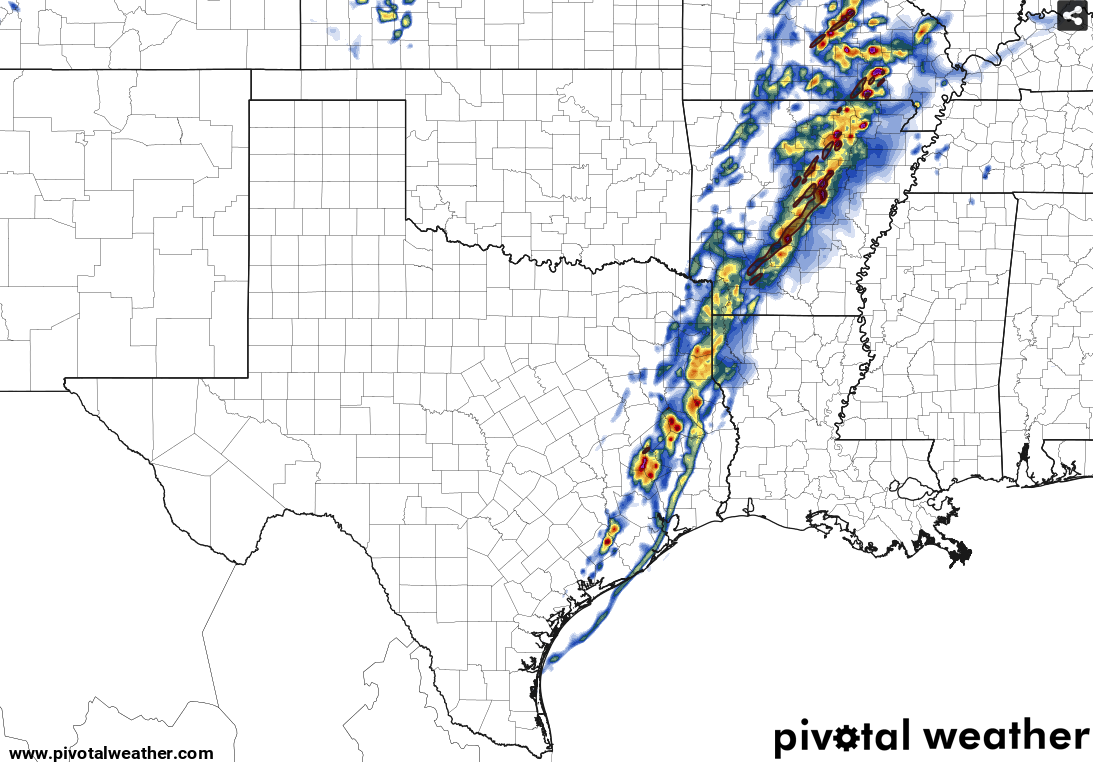 This area will be characterized by weaker deep-layer wind fields and midlevel lapse rates than farther north up the Mississippi Valley, but still sufficient in a setting of rich low-level theta-e, with enough deep shear to support severe potential.

With mean-wind and deep-shear vectors oriented with a substantial component parallel to the axis of low-level convective forcing, mode should be messy, with a mixture of quasi-linear, multicell and supercell characteristics. 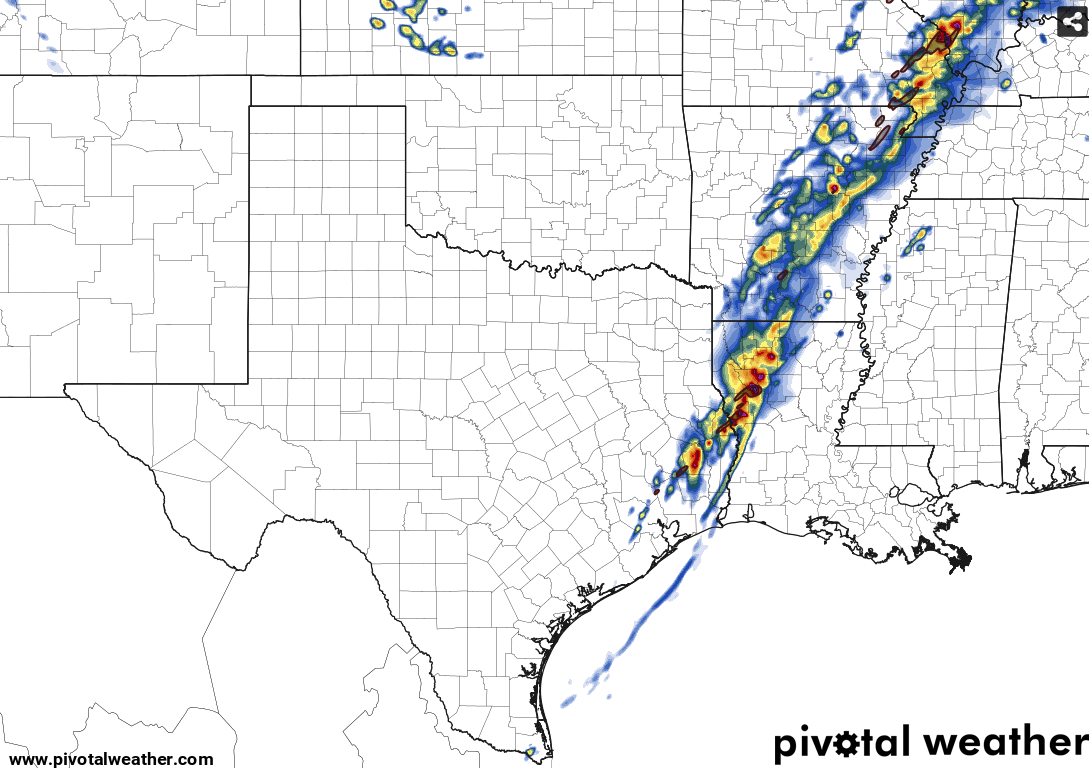 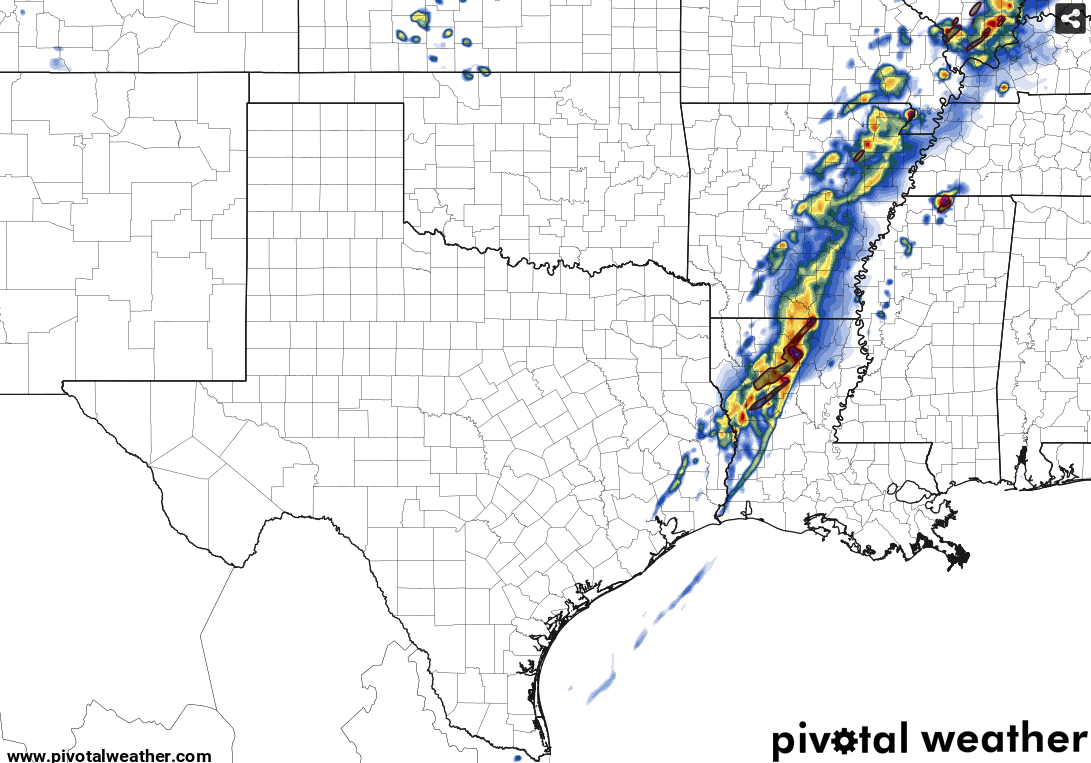 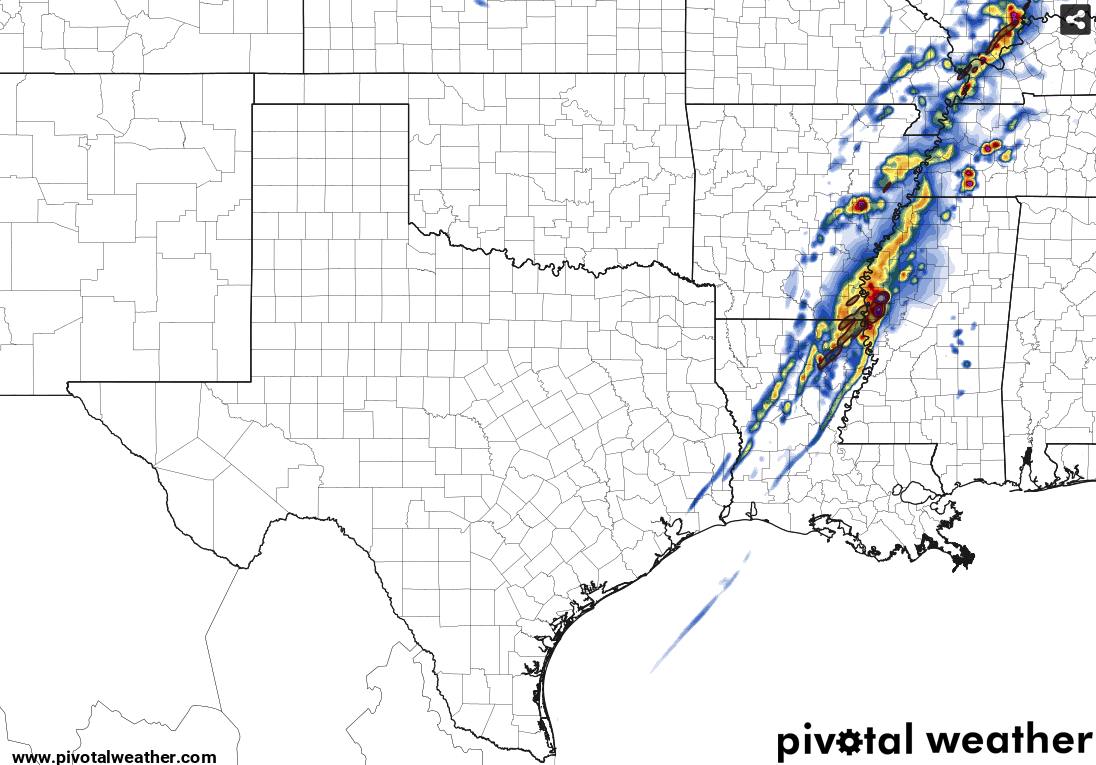 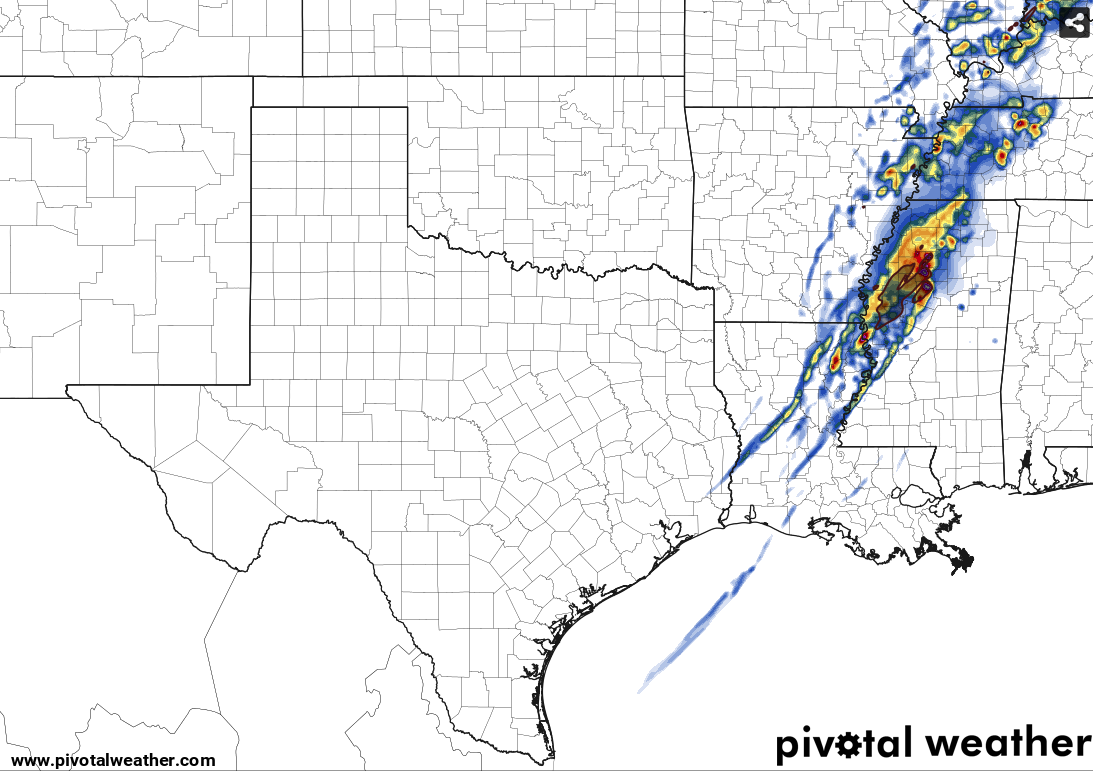 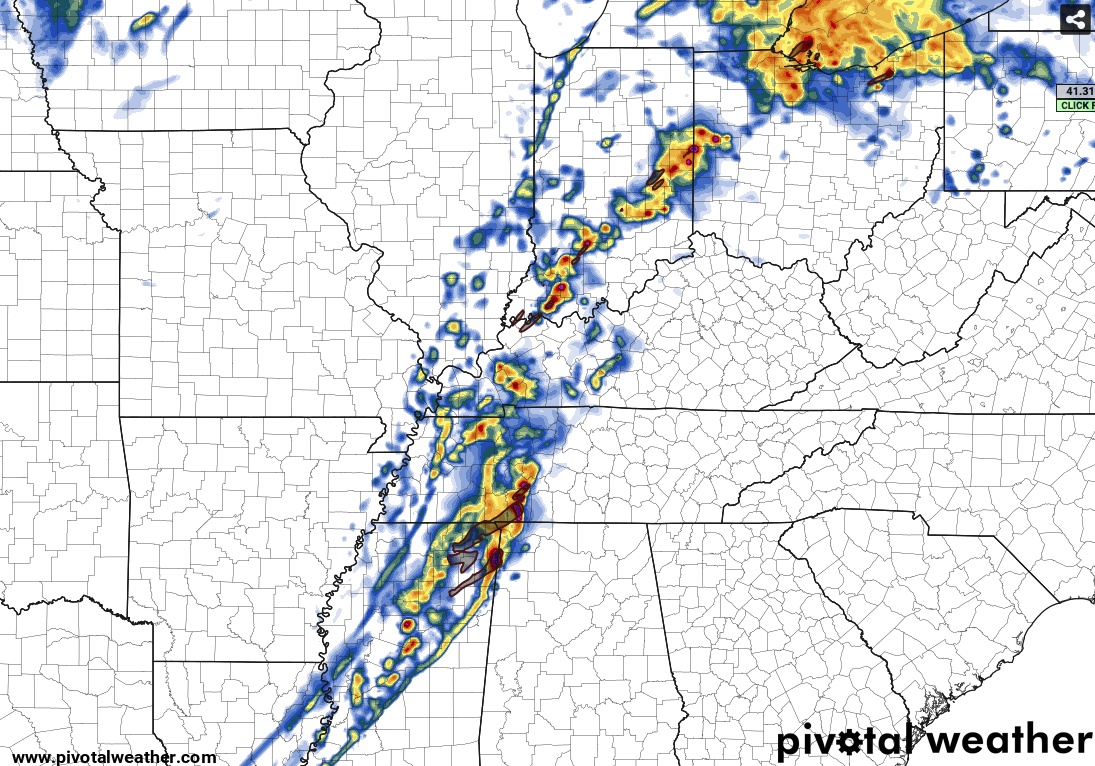 Tornadoes will be possible from supercells and QLCS-embedded vortices, particularly across parts of the Mid-South in closer proximity to the intense mid/upper winds. SPC – Edwards/Mosier.. 03/28/2020