Severe thunderstorms with widespread damaging winds, some greater than 75 mph, large hail, and a few tornadoes are expected to develop this afternoon and evening across parts of the Ozarks into the southern Plains. The metropolitan areas of Tulsa and Oklahoma City will be affected by these severe storms late this afternoon and this evening, and Dallas-Fort Worth overnight. 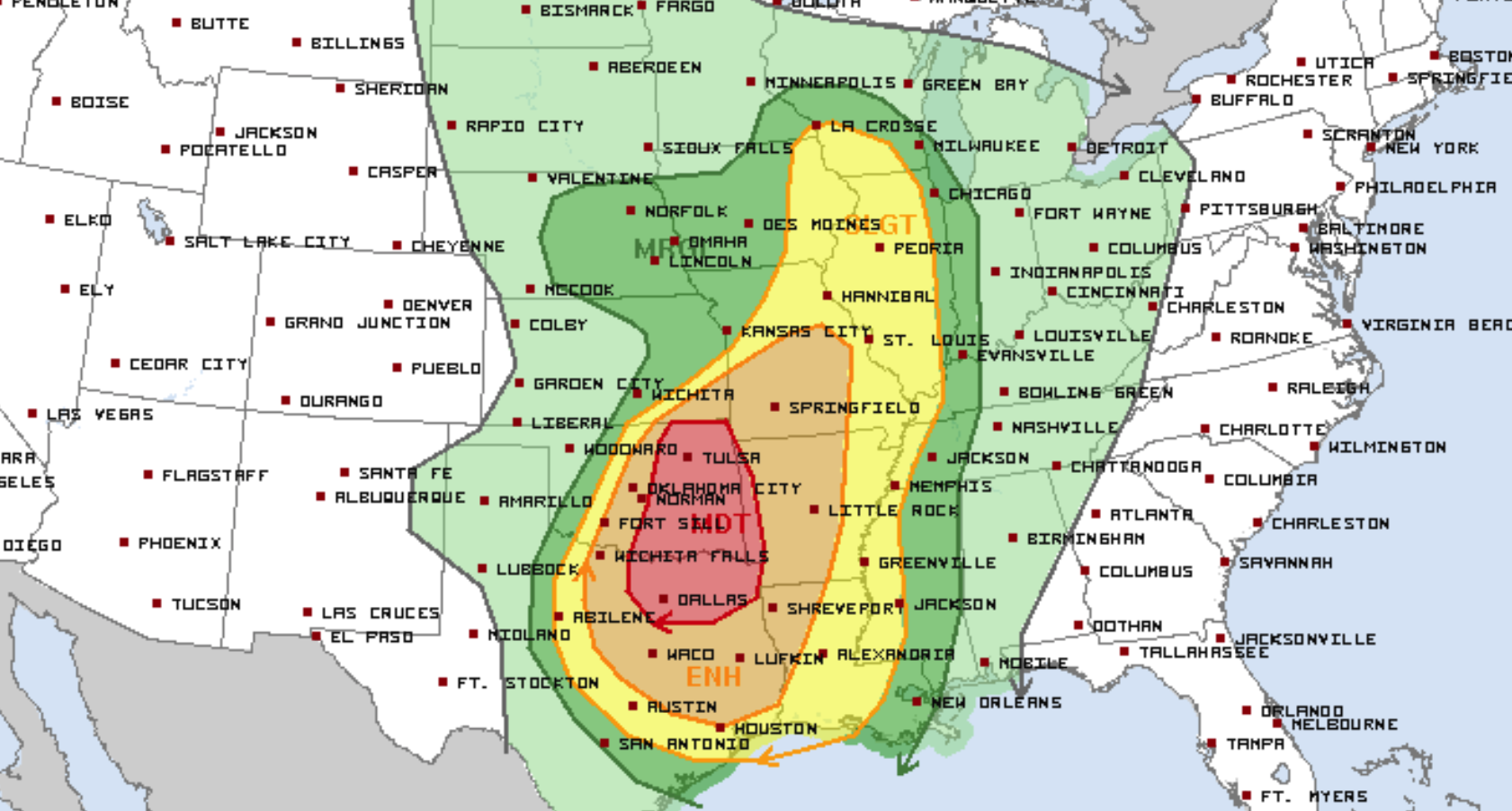 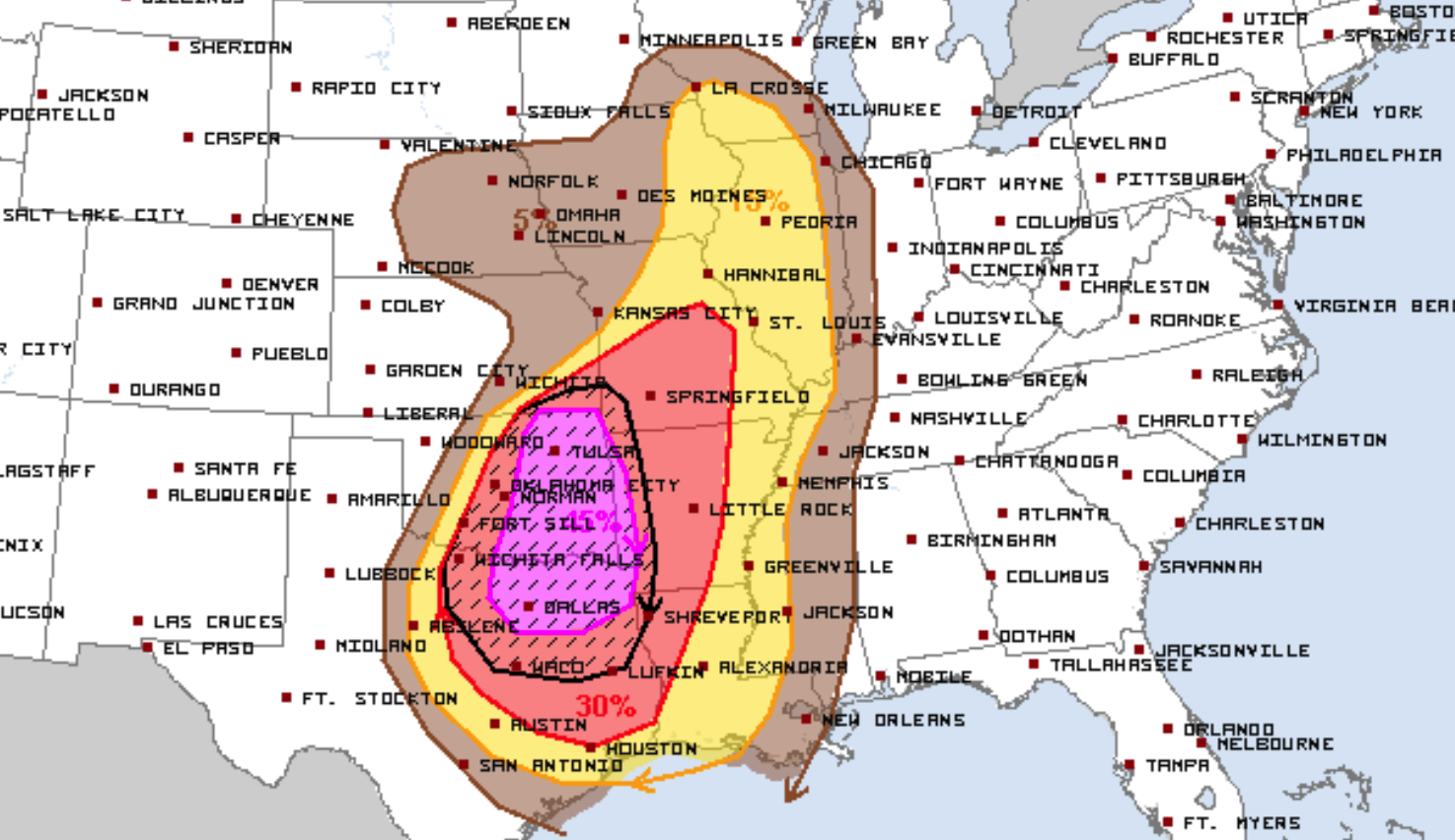 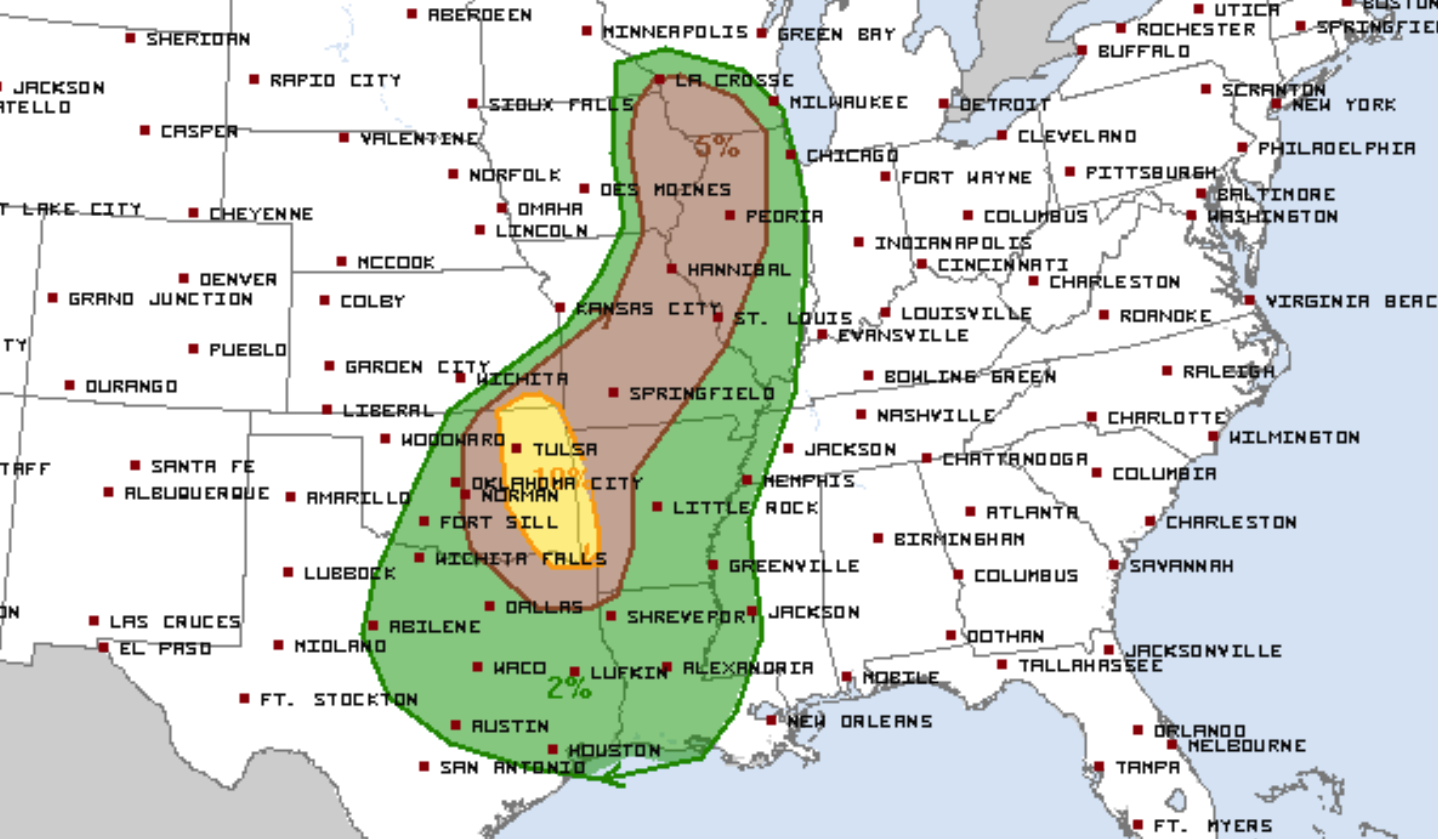 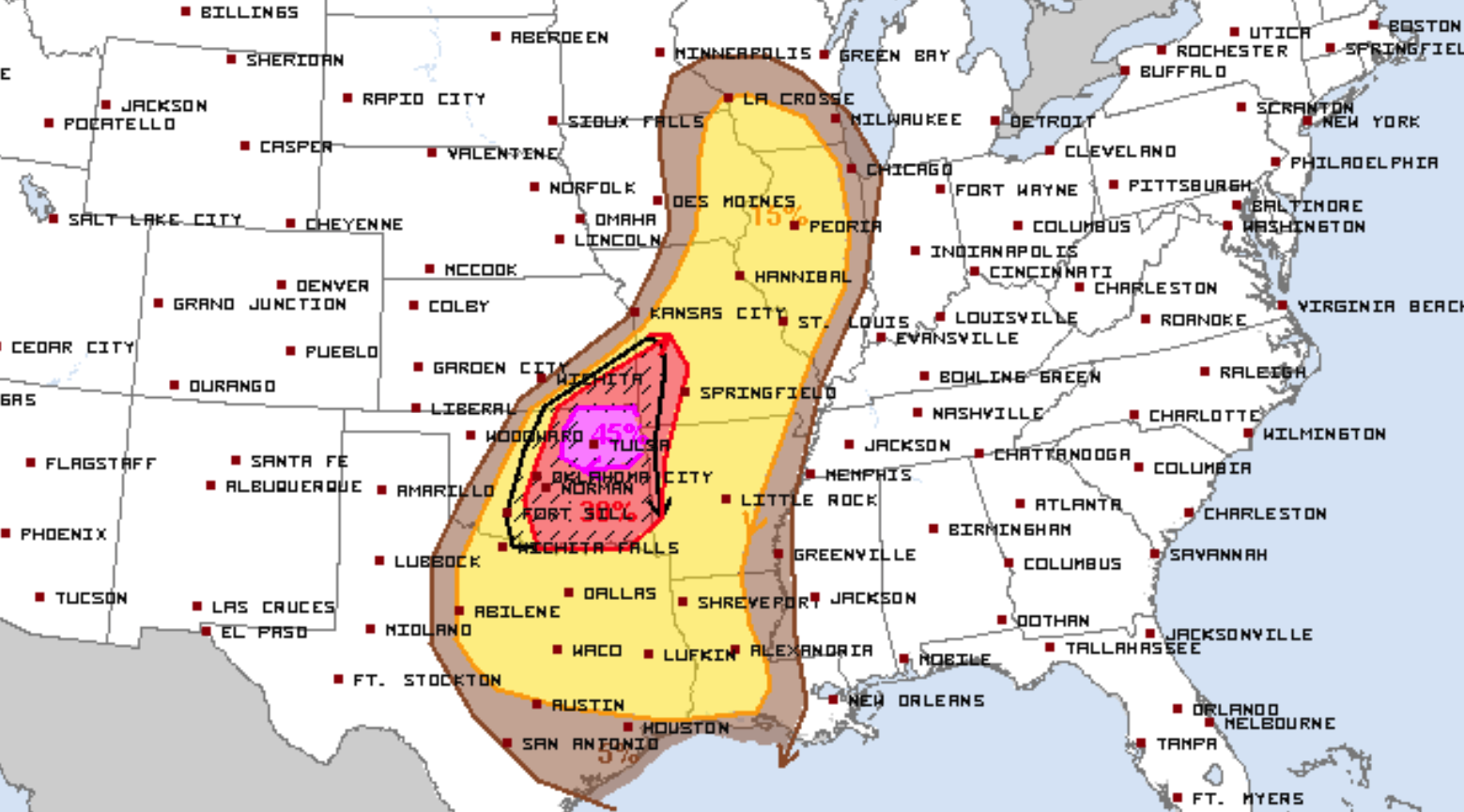 Rich low-level moisture is spreading northward from TX to OK and southeast KS, south of a cold front moving into southeastward across KS, and west of the morning convection from Texarkana southward along the Sabine River. This moistening is occurring beneath a plume of very steep midlevel lapse rates near 9 C/km. Surface heating in advance of the front will boost MLCAPE into the 2500-3500 J/kg range from southwest MO into southeast KS and central/eastern OK. Convective inhibition will weaken along the front by mid afternoon, with rapid thunderstorm development expected near or just after 21z from southern KS into MO. 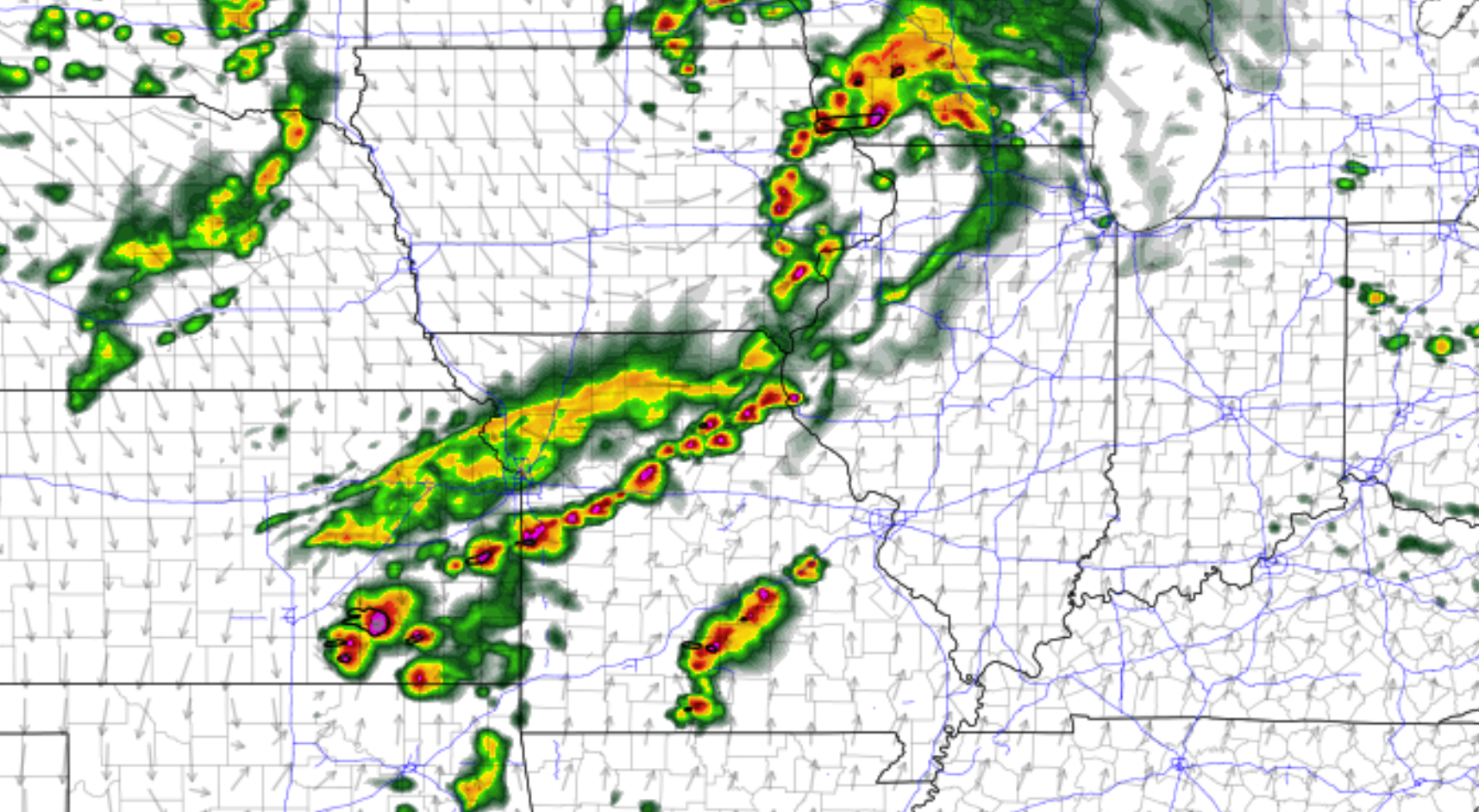 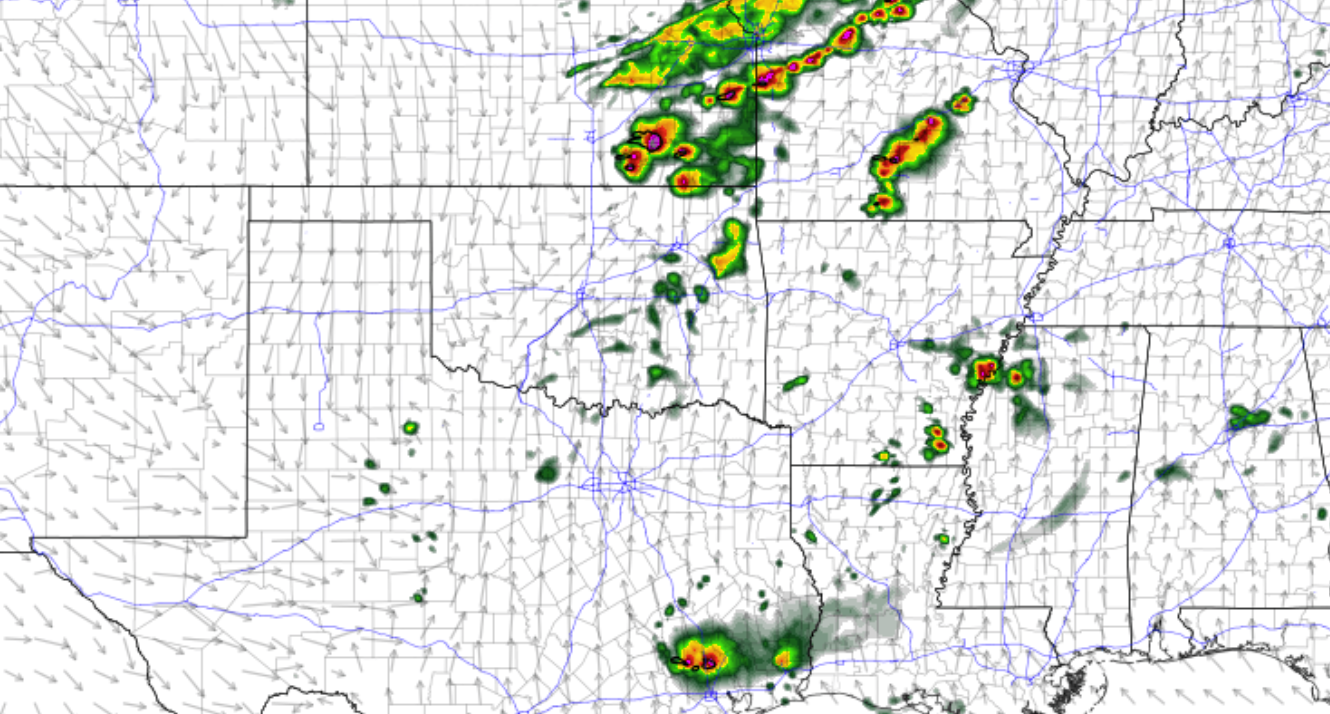 The initial storms along the boundary will pose some threat for tornadoes, given steep low-level lapse rates with large buoyancy and vertical vorticity along the boundary. Fairly rapid upscale growth into a line is expected by this evening, with storms back-building into central OK. A mix of multicells/bowing segments and embedded supercells is expected within the frontal squall line.

Aside from a few tornadoes with circulations within the line, the large CAPE/steep lapse rate environment will favor both large hail (especially with embedded supercells), and intense downbursts with widespread damaging winds. Convection will likely surge south-southeastward tonight across eastern OK/AR into east TX, with the threat for fairly widespread damaging winds continuing. There is some uncertainty regarding the eastern extent of the greater severe threat toward the MS River late tonight, given the residual influence of the ongoing Sabine River storms and possible disruptions in destabilization. 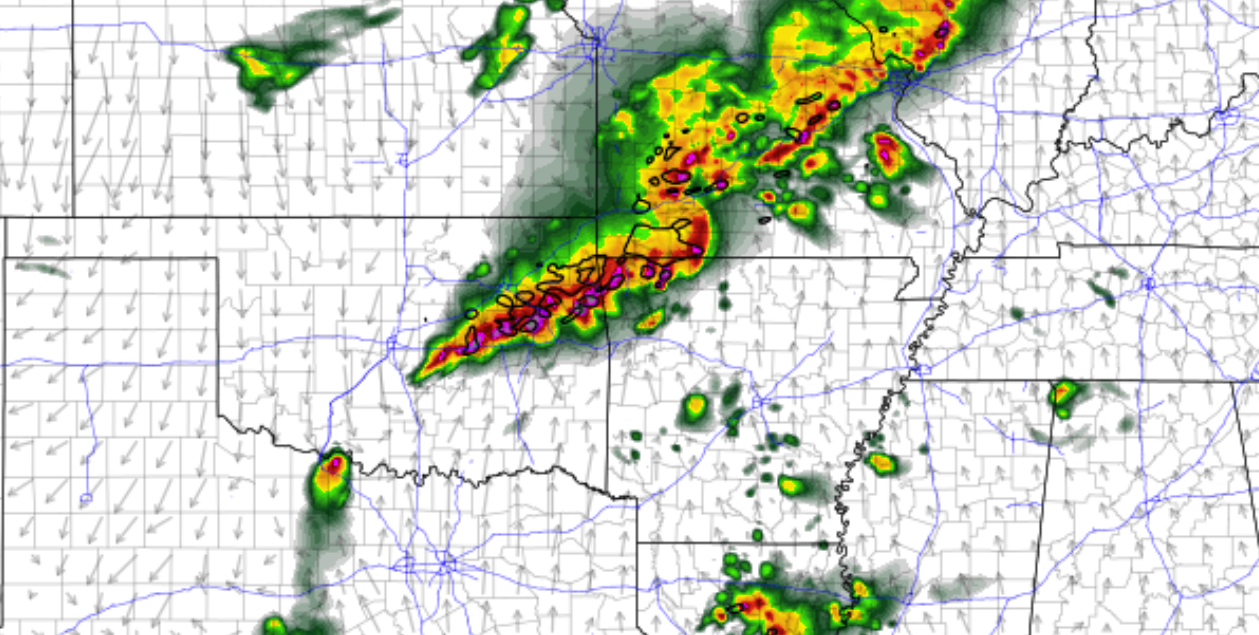 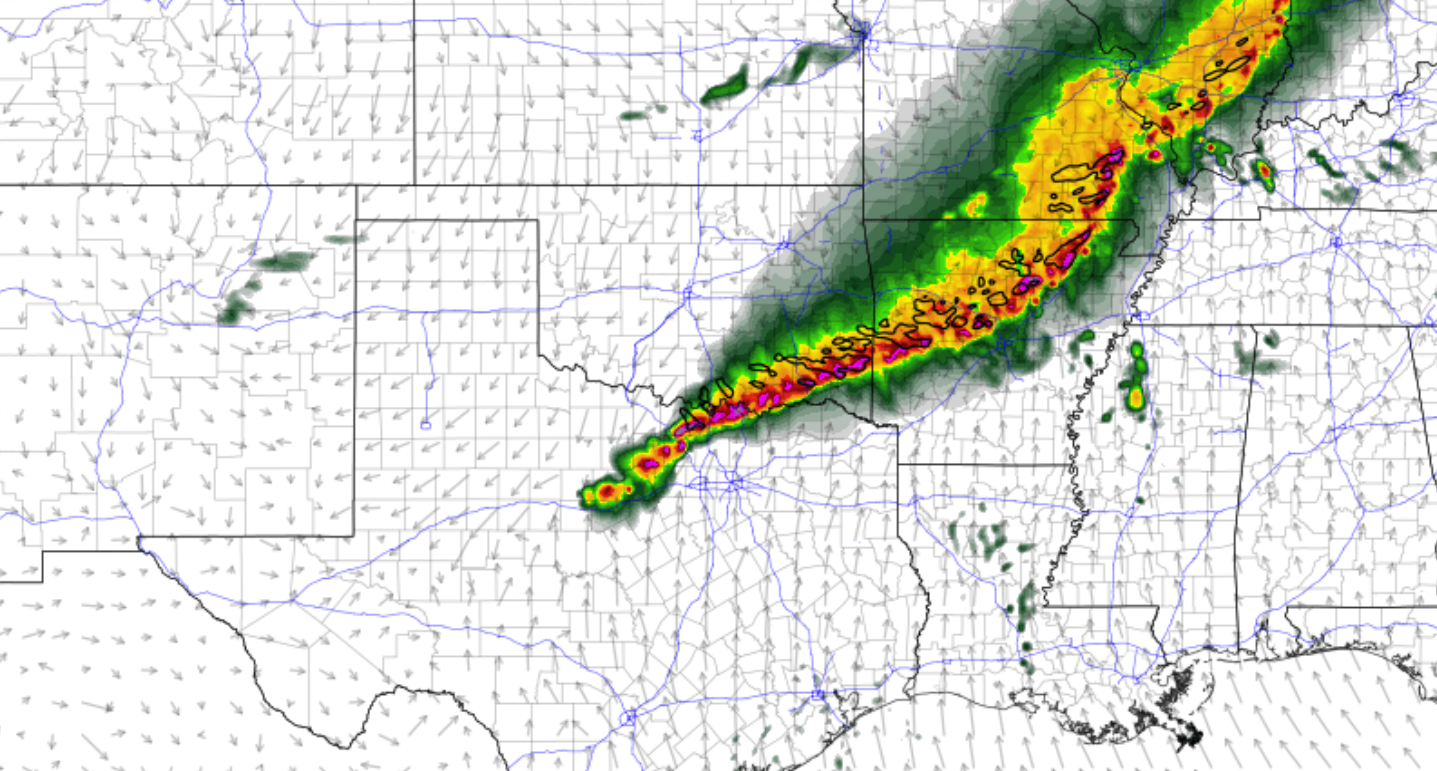 The primary synoptic cyclone will move eastward along the IA/MN border toward southern WI today, in advance of a pronounced lead shortwave trough likewise moving eastward over MN/IA. Low-level moisture will be more limited compared to areas farther southwest, but surface heating in cloud breaks and boundary-layer dewpoints of 56-60 F will support MLCAPE of 500-1000 J/kg this afternoon. Mass response to cyclogenesis will maintain vertical shear/hodographs favorable for supercells in advance of the cyclone and trailing cold front, with an attendant threat for a couple of tornadoes, as well as isolated large hail/damaging winds.

An ongoing, loosely organized cluster of storms near the Sabine River may persist well into the afternoon, with a tendency for new development on the south flank of the cluster as the low levels warm and moisten from the south. Moderate-strong buoyancy will support strong updrafts with marginal hail potential, though rather modest vertical shear suggests that multicell clusters will be the main convective mode. Likewise, occasional downburst winds will also be possible through the afternoon.

The primary synoptic front will be located east of this area this afternoon with a lead shortwave trough. However, a secondary frontal surge is expected across central/eastern NE this afternoon in association with the primary amplifying midlevel trough (now over the northern High Plains, as denoted by the band of rain now moving into northwest NE). There will sufficient residual low-level moisture for weak surface-based buoyancy this afternoon in advance of the secondary frontal surge. Some low-topped convection will accompany the front, where steep low-level lapse rates will favor strong/isolated damaging outflow gusts this afternoon/evening.