Have you ever wondered about the differences between cyclones, typhoons and hurricanes? It is all due to their location. When they occur in the South Pacific and Indian Oceans, we call them cyclones. The same type of storm in the Northwest Pacific is called a typhoon. In the Atlantic and Northeast Pacific, they’re called hurricanes. 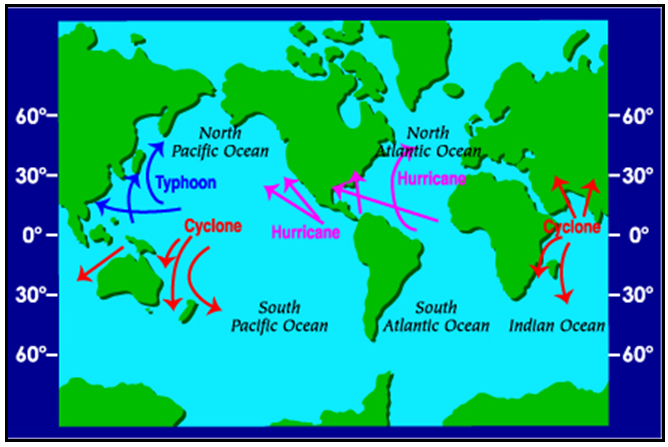 Cyclones, hurricanes and typhoons have been given names for several centuries. They were most commonly named after the locations that were affected. Historians believe that Australian Clement Wragge was the first to use personal names in 1887. This practice finished when Wragge retired in the early 1900s. The current system began again in 1945, with United States Army Air Forces weather forecasters naming extreme weather events after their wives and girlfriends. Within a few years, this became the norm, with a new set of names developed annually. Eventually, regional meteorological services took over naming cyclones in their areas. Female names continued to be used. In 1975, the New Zealand Meteorological Service decided to include men’s names in the naming list – and soon after, other services did the same. The naming systems also became more inclusive to better reflect the regions’ cultures and languages.

Worldwide, the names are listed in alphabetical order. Some regions begin with a new list each year and recycle the names on a 6-year rotation. Other regions (New Zealand included) have lists of names that are used sequentially – a new list begins only when the old list is finished. The World Meteorological Organization removes the names of deadly or costly storms (like Katrina in the US or Tracy in Darwin) from the lists.